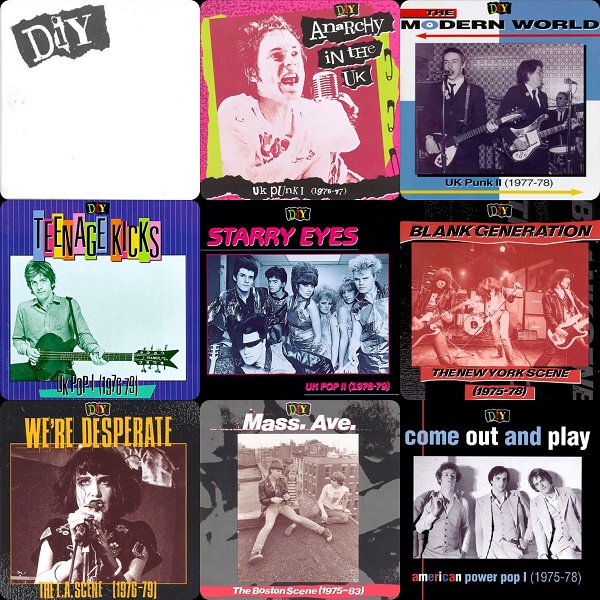 We started this lonnnnnnnng and bumpy ride to nowhere back in April 2019 when we wrote about Rhino’s DIY sampler disc. This is only the third post here on The Hideaway since July 2019 when I started kicking the big bucks into FICA again for all them Boomers looking to cash out. Thanks to everyone who inquired about my health & well-being as well as the future of The Hideaway. We still here! 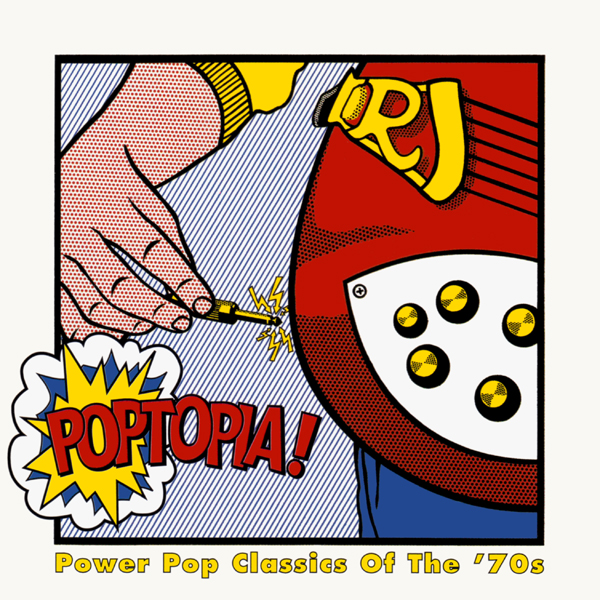 Before we get to Shake It Up! - American Power Pop II, the last volume in our coverage of Rhino's DIY Punk, Power Pop, and New Wave series, let's take a look at a later Power Pop offering from the fine folks at Rhino entitled Poptopia! 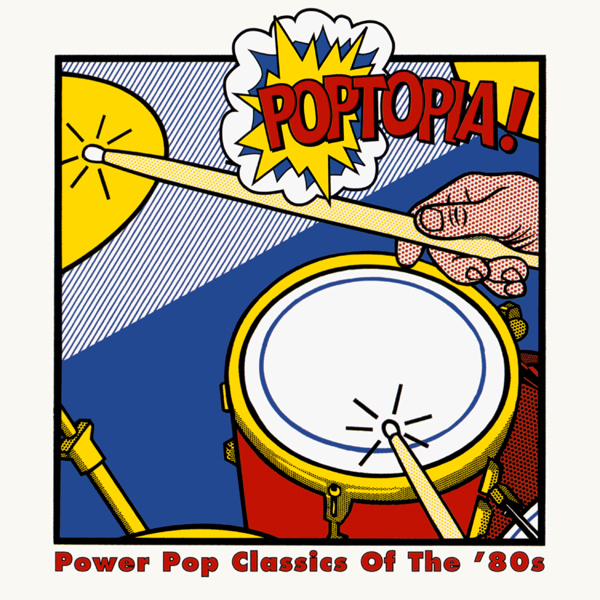 Released on May 27, 1997, the three-volume series Poptopia! devotes an 18 song disc each to the power pop classics of the 70s, the 80s, and the 90s. Some fans of the genre may complain about the lack of certain crucial tracks (either due to selection or licensing) or even the fact that the label could have issued more volumes in the series (like the 19 volumes in the Just Can't Get Enough series) or should have done a really cool box set (like No Thanks! The 70s Punk Rebellion in 2003) but each disc is a fine sampler of the power pop genre and the decade it represents. 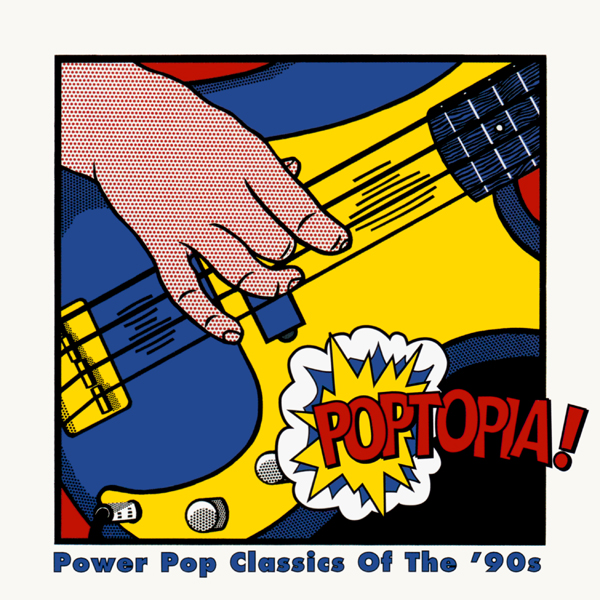 There is some overlap between the DIY and Poptopia! discs but both are worthwhile additions. The fine folks at Rhino compiled a brief, 20 track triple decade-spanning Poptopia! Spotify playlist in 2011 before offering a more complete 46 track offering in 2018. One fan of the genre even came up with playlists representing Power Pop Classics of the 2000s and 2010s. 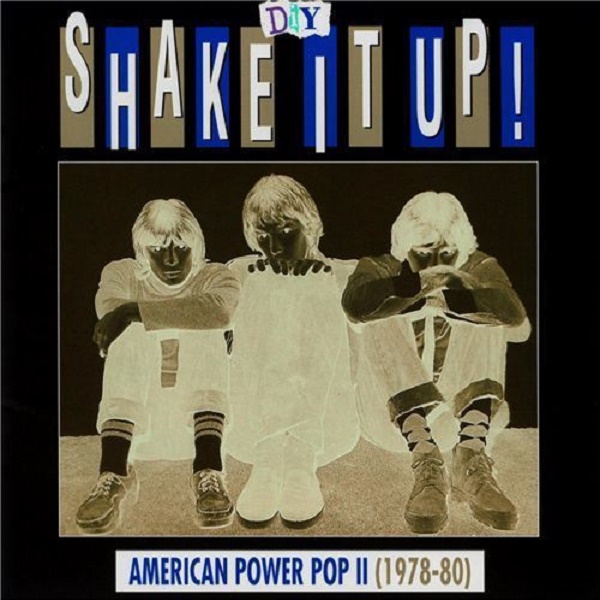 Four artists each have a pair of tracks on Shake It Up! and none of them are The Cars though that band does appear on Mass Ave. 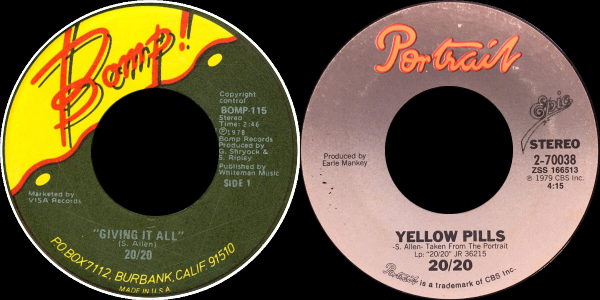 Shake It Up! cover boys 20/20 are represented with "Giving It All" their 1978 debut 45 on Bomp! Records ("America's Pioneer New Wave Label") and their signature song "Yellow Pills" from 1979. The former is a power pop blueprint drawn from the same cloth their fellow Tulsa travelers and power poppers Phil Seymour and Dwight Twilley used to find a modicum of success once they relocated from T Town to Shaky City. 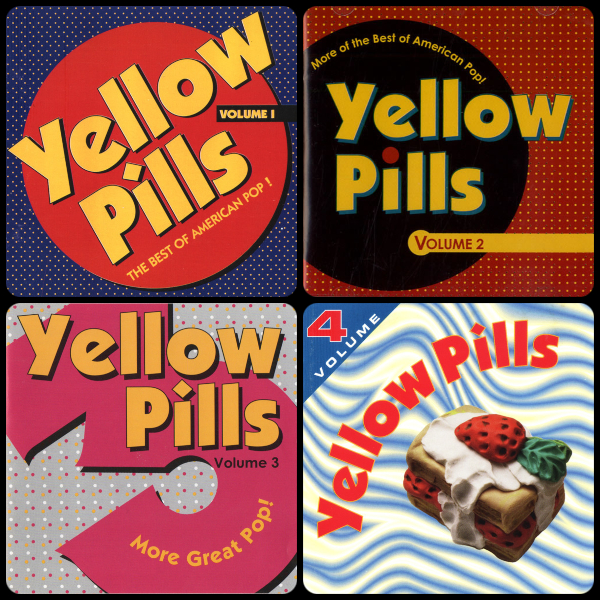 The latter song is something of an unofficial anthem in power pop where it is most often described as "a cult favorite" and inspired fan Jordan Oakes to launch a power pop fanzine and 5 4 volume compilation series titled Yellow Pills. (There is/was a fifth volume but its a whole 'nother mess.) Next up with two cuts on Shake It Up! is The Beat aka the reason why the band with an identical name from the UK became The English Beat here in the States. Which begs the obvious question: Is The Beat known as The American Beat in the UK? I digress.

The first Beat cut is the frantic burst of energy known as "Walking Out Of Love", their take on the classic please don't leave me girl song-writing topic. The song closes out Side One of their eponymous release and is listed as 1:44.7 on the album label and on the b-side of a 45. (Can't recall if I'd seen time ever listed in decimal format but there it is. Kinda cool.)

The opening song of Side Two of the same 1979 album is the second Beat cut on Shake It Up!, a fun little track which brings to mind 1966's "Five O'Clock World" by The Vogues, both lyrically and melodically. The Beat by The Beat holds up well as a whole even some 41 years later and is recommended. 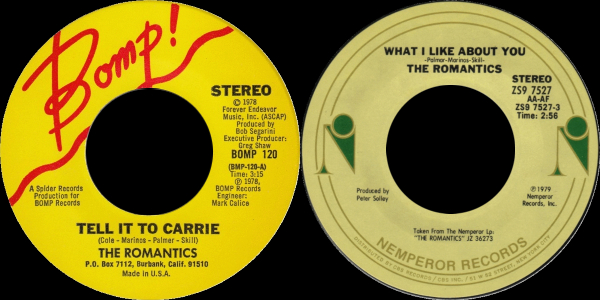 Even those unfamiliar with power pop as a genre have their ears perk up when a certain song by The Romantics comes on. (Case in point: My wife said "oooh, I like this song" when "What I Like About You" recently played, something she has said more than a few times during all the time we've been together.) The Romantics have two songs on Shake It Up!: "Tell It To Carrie" and the power pop rockin' "What I Like About You". 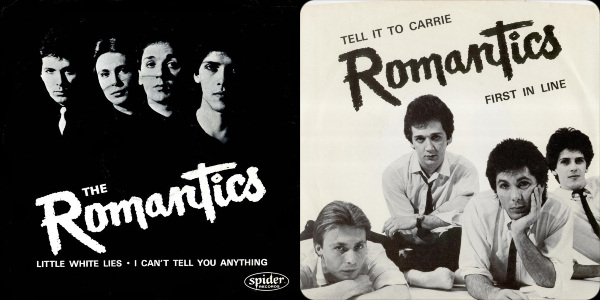 The Romantics had released a 45 on Detroit's Spider Records in 1977 and then "Tell It To Carrie" on Bomp! in 1978 before signing with Nemporer in 1979 and cutting  "What I Like About You" and enough songs to fill out their debut album which was released four days into 1980. From The Romantics home base in Detroit, it's 244 miles due west to the stomping ground of Shoes in Zion, Illinois. 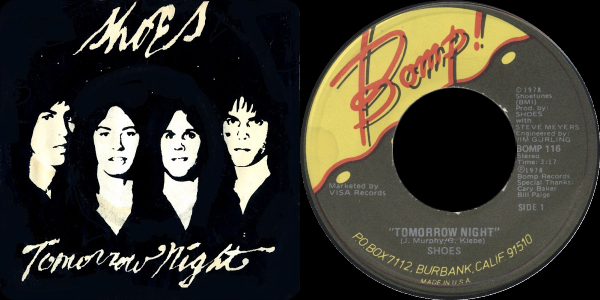 Another Bomp! release is 1978's "Tomorrow Night" from Shoes, a simply beautiful pop song that earned the band a three-album deal with Elektra. They re-recorded the single and gave it the pole position on Present Tense, their first major-label album. 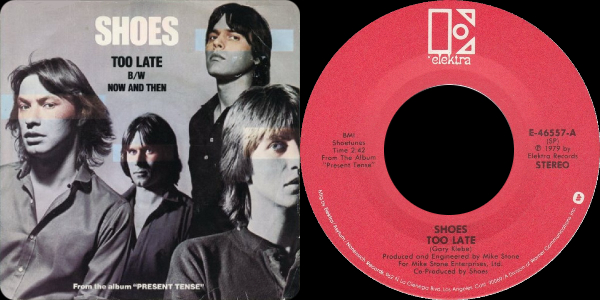 The second Shoes track on Shake It Up! and coming right after "Tomorrow Night" on Present Tense is the equally tasty "Too Late", the 24th video played on MTV's very first day. It was one of four music videos from the band aired that day, including "Tomorrow Night", "Cruel You" and "In My Arms Again" - all performance videos from the Present Tense album, another solid listen. 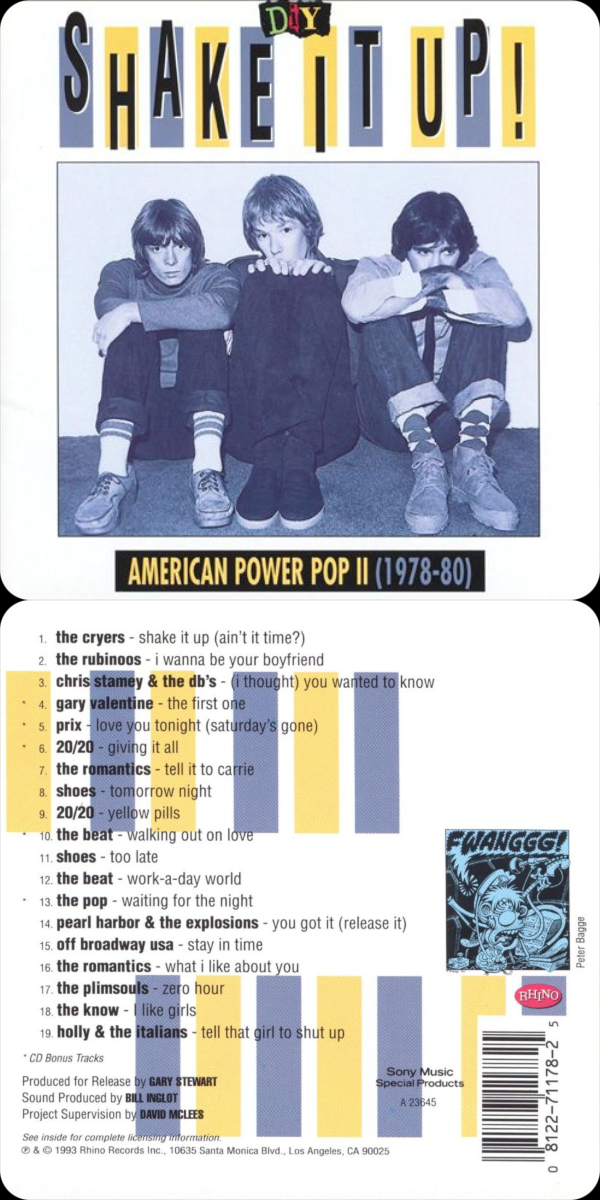 Listen to most of
these songs on Spotify
In the end, after spending a solid six days listening to Shake It Up! American Power Pop II (1979-1980) at home, in the Blueberry, and even at work, I realized I had three favorite tracks out of the 19 featured, including 5 bonus tracks exclusive to the CD. 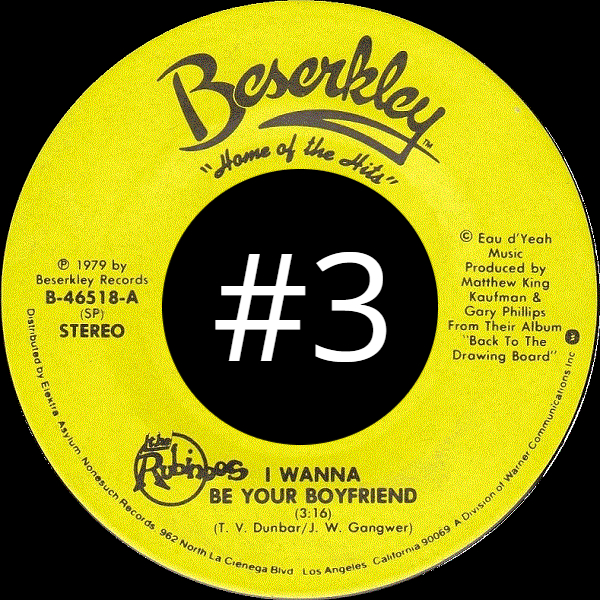 Nobody sounds like they are having more fun begging and pleading with the female of the species to let them into their lives than The Rubinoos. The chorus from "I Wanna Be Your Boyfriend" will haunt the cells between your ears for the next 72 hours minimum, so listen responsibly. 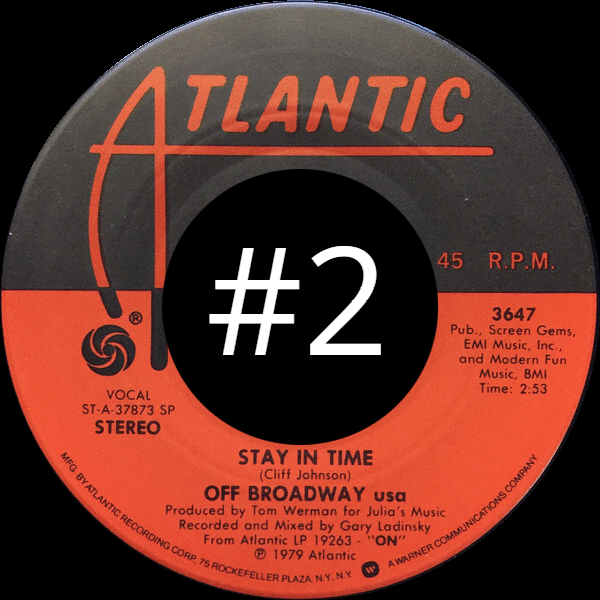 And speaking of hooks with staying power, Off Broadway's "Stay In Time" is a killer that is little known outside the Midwest which accounts for a disappointing peak of number 51 on the Hot 100. To all my friends, family, co-workers, random strangers, and neighbors who got to hear it just this week - many undoubtedly for the first time ever - you're welcome. 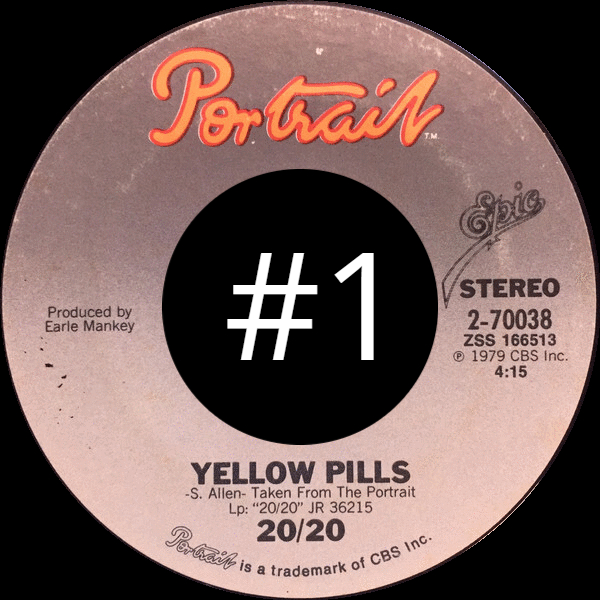 It's the New Wavey synth that lifted this one above the others. I felt like I was on yellow pills when I listened to it, enjoying it more than I should. It makes me happy hearing it and hearing the lyrics confuses me which is my problem no doubt as it is an acknowledged cult favorite and I'm not a cult member. Or am I?