Rhino may have reached a peak in 1995, releasing or continuing to release several volumes each of definitive compilation series like Just Can't Get Enough, Smooth Grooves, Radio Daze, Didn't It Blow Your Mind, The Disco Years, Give Your Body Up and Tube Tunes. That year also saw the release of one of Rhino's most unheralded, unappreciated and unfortunately named compilation series, Hillbilly Fever!.

Where most country various-artists collections are designed with dollars, not sense, in mind, Rhino's five-disc Hillbilly Fever series was thoughtfully compiled and intelligently executed. Hillbilly Fever concentrates on the classic era of recorded country music, running from 1933 to 1975, spotlighting nearly all the important artists (usually with one of their best-known songs) along the way.

Following the lead set by Sony's Columbia Classics series from 1990, Hillbilly Fever! guides the listener on a chronological journey through the evolution of country music by subgenre including Western Swing, Honky-Tonk, and Country-Rock. Each of the five 18-track discs comes with a 16-page booklet featuring an essay on a particular chapter in country music history by Rich Kienzle, who also produced the set with James Austin & Patrick Milligan along with liner notes & recording details for each track. 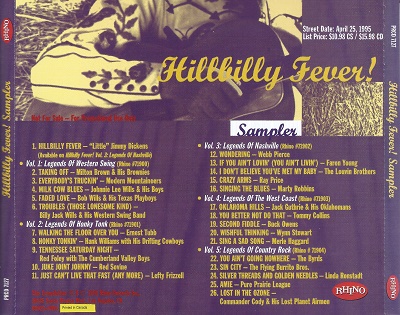 As they had so often done with their many CD compilation series, a promo-only Hillbilly Fever! sampler disc containing a few tracks from each volume of the series was sent out to record stores and radio stations prior to all five volumes being simultaneously released on April 25, 1995. The sampler disc features the series namesake tune as track one and then five songs each from the five volumes for a total of 26 tracks 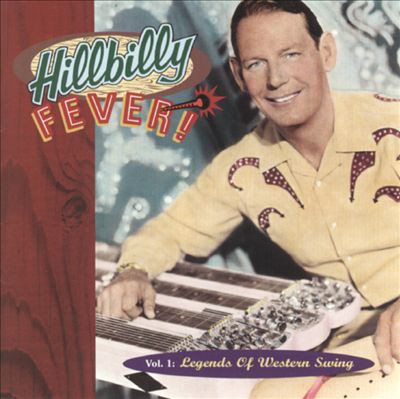 Vol. 1 is devoted to the Legends of Western Swing and features songs released from the twenty-six years between 1933 through 1958. Western Swing legends including Bob Wills & His Texas Playboys, Spade Cooley (The King of Western Swing) & His Band and the disc's cover model Leon McAuliffe with His Western Sing Band are represented among the eighteen tracks on Vol. 1 with each artist getting a single track to shine though some artists play on multiple tracks, offering a more complete portrait of Western Swing music than any album before or since. 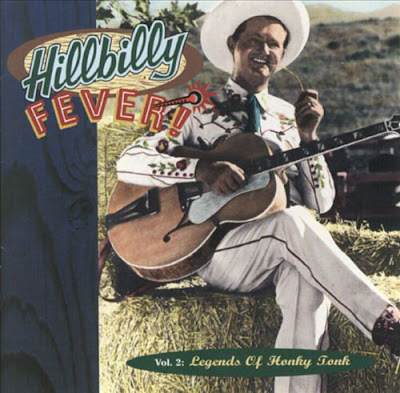 Vol. 2 runs from "Honky Tonk Blues" in 1937 up to "Pop A Top" thirty years later as it focuses on the Legends of Honky Tonk. The hype sticker on the front promises classic tracks from Hank Williams, Lefty Frizzell, Ernest Tubb, George Jones, Red Foley and Others! Honky Tonk is not too far removed from Western Swing, allowing Hank Thompson & His Brazos Valley Boys to make the leap from Vol. 1 to Vol. 2 with "The Wild Side Of Life" a #1 country hit that crossed over and made it up to #27 on the pop chart back in 1952. Only three of the other seventeen tracks were pop hits with another six songs ending up winning, placing or showing on the country chart. This fiddle and steel-guitar infused, best-heard-in-a-barroom break-up and drink-up music is nothing but primo top shelf. 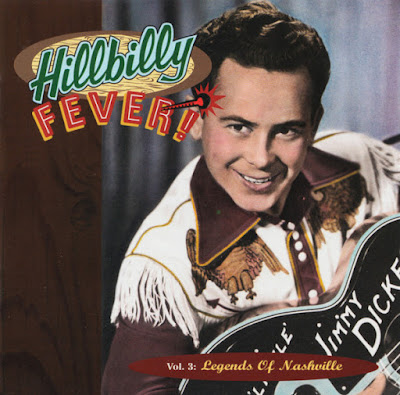 "Hillbilly Fever", the song that gives the series its title, is included on Vol. 3 Legends of Nashville in a 1950 performance from "Little" Jimmy Dickens and his image also graces the album's cover. Vol. 3 has songs spanning 1945-1957 from Nashville legends Eddy Arnold, Webb Pierce, Ray Price, Sonny James, Marty Robbins, and Patsy Cline. Hank Williams and Ernest overlap from Vol. 2 to Vol. 3 and though most of these songs are not personal favorites I can appreciate and recognize their importance and significance in country music's evolution. But slip on the last three tracks – the songs by James, Robbins, and Cline – anytime for me and I'm a happy camper. 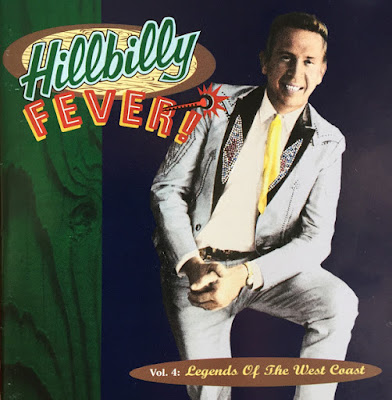 Vol. 4 covers 1941-1963 and the Legends of The West Coast including Tex Ritter, Tennessee Ernie Ford, Merle Haggard, Gene Autry and, of course, Buck Owens. Al Dexter and Spade Cooley also return from earlier volumes in the series but my favorite artist on the album is Tommy Collins, who I first came across in 2015. Though Collins is my favorite artist on the compilation, my favorite song is one that lends a title to another definitive country music series: "Dim Lights, Thick Smoke (And Loud, Loud Music)" by Joe Maphis & Rose Lee. I would have preferred more West Coast songs from the late Fifties through the late Sixties but I wasn't asked. 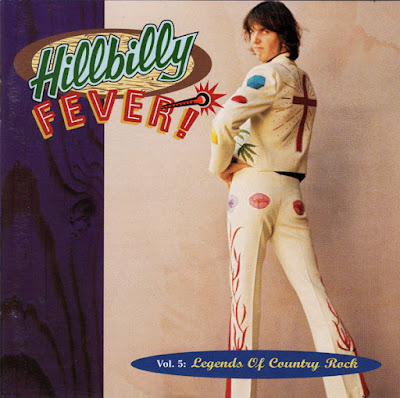 Which brings us to the fifth and final volume in this fine little series, Legends of Country Rock, which covers the decade from 1966-1975 and stars more than a few artists regular Hideaway viewers will surely recognize: Linda Ronstadt, Poco, Pure Prairie League, Bob Dylan, The Nitty Gritty Dirt Band, The Byrds, and The Marshall Tucker Band. Vol. 5 along with Vol. 2 get the most plays here at The Hideaway so you know what your boy HERC likes to listen to. 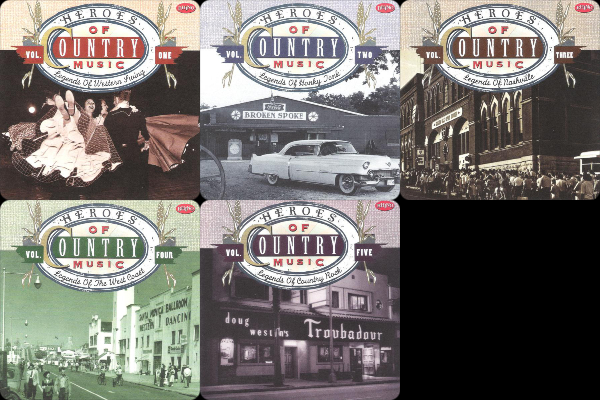 Despite Hillbilly Fever! also being released on cassette – each with only a dozen of the eighteen songs found on the compact disc – none of the five volumes sold anywhere near the numbers that Rhino execs had hoped and they placed the blame on the title of the series. According to Stephen Thomas Erlewine:

None of the five discs in the Hillbilly Fever series sold in its initial release, probably because its title was too smug to appeal to either hardcore record collectors or casual country fans. A year after the release of Hillbilly Fever, Rhino reissued the entire series under the title Heroes of Country Music.

Erlewine goes on to state that the five volumes of Heroes of Country Music were issued in 1996 with fewer tracks than their Hillbilly Fever! counterparts but I have not found that to be true within my own collection as I inherited several volumes of the 1996 series from my father in 2015 and it appears only the series title & artwork were changed; the tracklists are identical, even in the same running order. Despite the excellent sound and well-chosen track selection, all ten volumes in both series are readily available, sometimes stupid cheap.