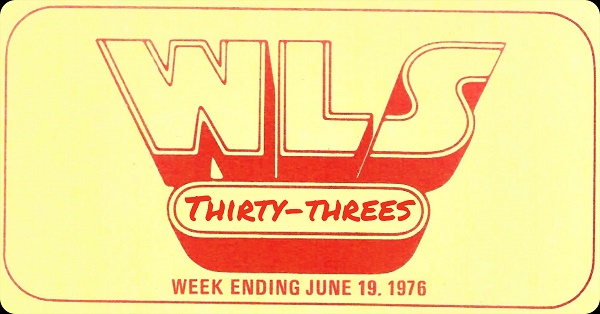 When I've scanned my WLS surveys in the past, I've noticed slight differences in color - the hue, the tone - between the original and the digital image but posted them anyway. I did find someone else's scan of today's survey and it better resembles the colors of the actual survey than my own scan does. In the image to the left, their bright vivid scan is on the left and my dull even after being adjusted scan is on the right. I apologize for the muted, washed out and just plain off colors of all our previous, present and future scans. You deserve better. At least our scans will always have that unique Hideaway angle (as seen at the top of and throughout this post) you've come to expect. 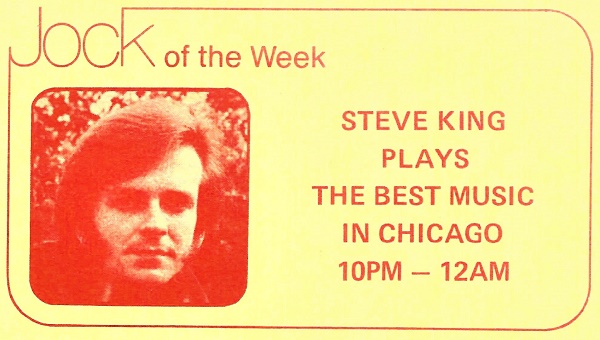 The WLS Music Survey dated June 19, 1976, features Steve King as Jock Of The Week playing the best music in the Windy City for 120 minutes late each evening. This seems like an unusually short shift for a jock. I've always been under the impression that three to four hours was the norm. Maybe he had a paper route and couldn't stick around.

With the lone exception of Jefferson Starship, all of the acts listed on Concerts in the Weeks Ahead have since been inducted into the Rock N Roll Hall Of Fame. And it must be said that several members of Starship were inducted under the band's former incarnation as Jefferson Airplane. I feel it also must be said that the opening act for the two Beach Boys shows, which featured Brian Wilson back on the road for the first time in a while, would be Billy Joel. Joel would also be inducted into the Hall. 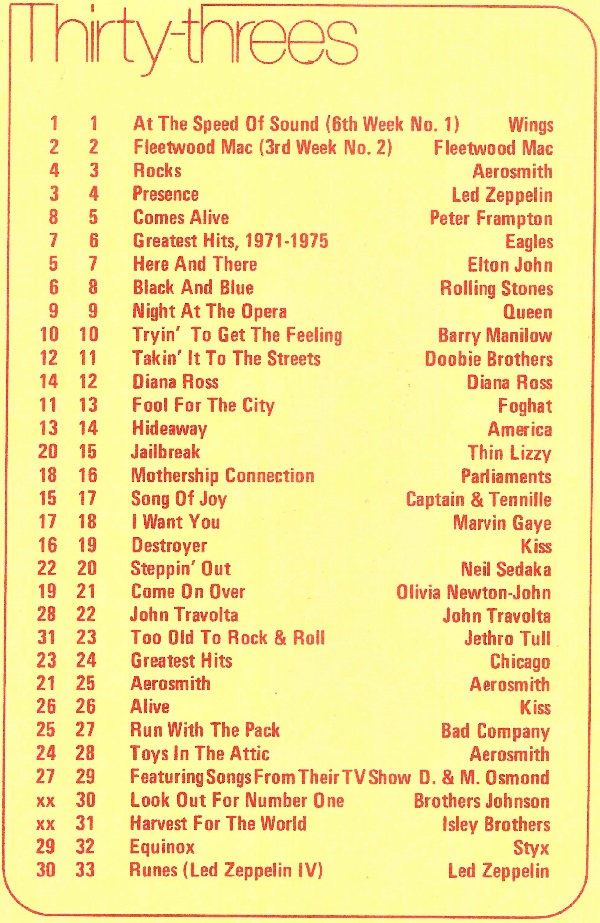 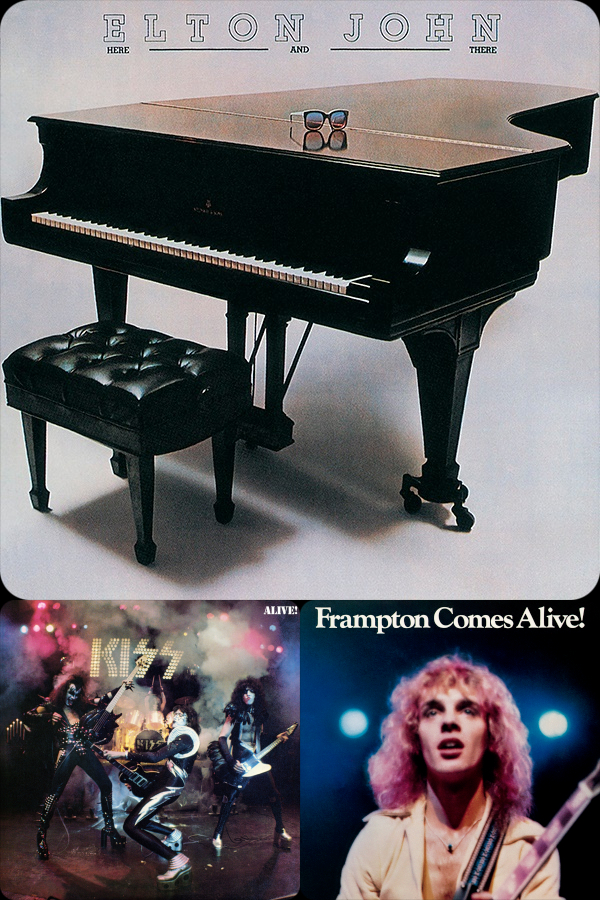 Elton John has one of three live albums on the Thirty-threes chart this week with Here and There, a contractual obligation that freed him up to release music on his own The Rocket Record Company, which had signed Cliff Richard, Neil Sedaka, and The Hudson Brothers, as well as John's duet partner Kiki Dee on "Don't Go Breaking My Heart", his first release on the label. Here And There peaked at #5 last week and would spend three more weeks in the Top 10 before sliding down the chart over the next 8 weeks. Soon-to-be-classic double-(a)live albums from Peter Frampton (#5) and KISS (#26) round out the trio of live albums on the list of Thirty-threes. 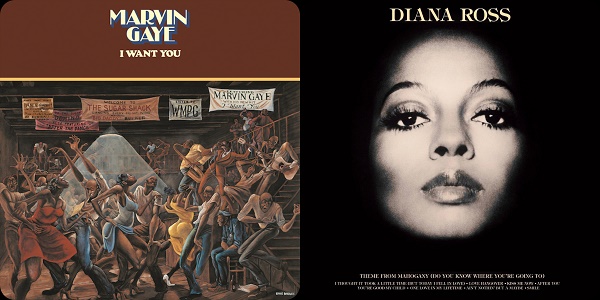 Both the King and Queen of Motown are represented on this week's list of albums. King Marvin Gaye's I Want You falls one spot to #18 after peaking on the Thirty-threes chart at #15 a month prior. The album's title track will debut on the Forty-fives chart the very next week and, in 2003, a special double-disc Special Edition of the album will be released, padded with alternate versions, unedited mixes and instrumentals. Queen Diana Ross has her self-titled album move up two spots to #12 on its way to a #11 peak the following week just as her single "Love Hangover" peaks at #2 on the singles chart. Diana Ross got the Expanded Edition two-disc treatment in 2012 with added single and alternate versions. 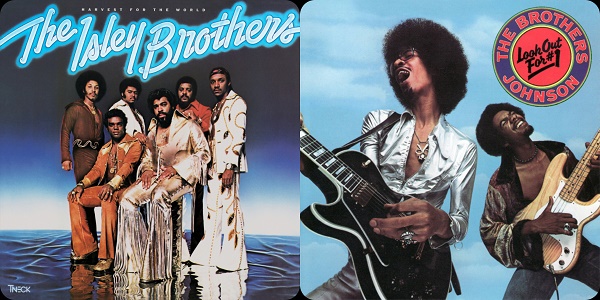 Two bands containing brothers in their ranks as well as in their names have the only albums debuting on the Thirty-three chart this week: The Isley Brothers pop in at #31 on their way to topping out at #23 with Harvest For The World while The Brothers Johnson come in at #30 with their debut album, the Quincy Jones-produced Look Out For #1. The album would peak at #25 in a nine-week stay on WLS's album chart. 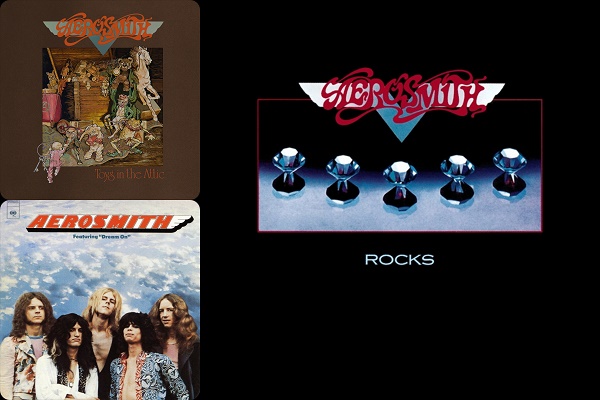 Aerosmith has three albums on the WLS album chart this week with the re-release of their self-titled 1973 debut back on the chart at #25, 1975's Toys In The Attic down at #28 and their newest album, Rocks, way up at #3. Attic had risen to #5 during its run while Aerosmith had climbed to #2, a position Rocks would soon equal. 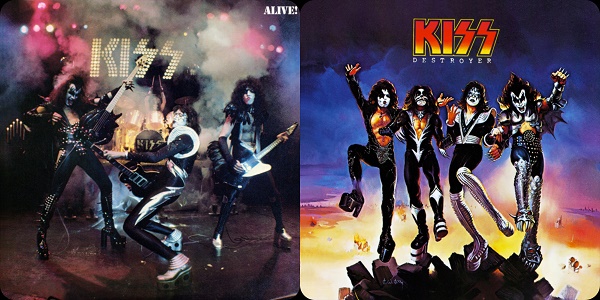 Two artists each have a pair of albums on the list this week. KISS's Alive! was holding at #26 while Destroyer was down three to #19. Led Zeppelin's untitled fourth album is listed as Runes (Led Zeppelin IV) on the Thirty-threes where it sits at #33 on its second run on the chart. It peaked at Number One back in 1971 shortly after its original release. The band's 1976 release, Presence - also a former Number One album - is down one to #4 this week. 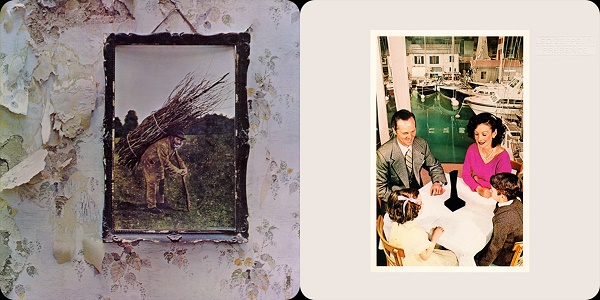 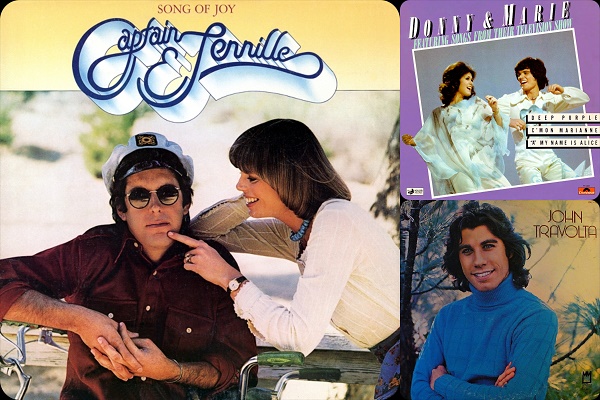 To the best of my knowledge, Diana Ross joins the artists featured on the three albums above in a select group of artists on this week's Thirty-threes chart whose likenesses graced 12 1/4" action figures back in 1976. The three (five?) artists whose albums are pictured above also have something else in common with Diana Ross - they all starred in their own TV shows or televised specials in 1976: 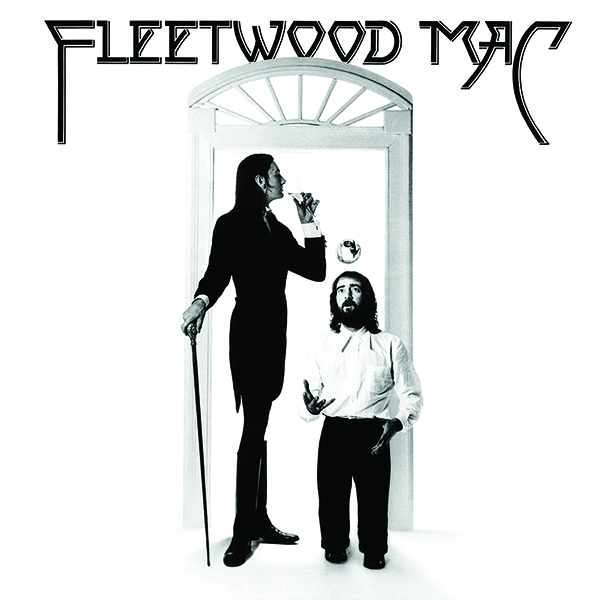 My spotlight album on this week's chart is Fleetwood Mac by Fleetwood Mac. In hindsight, it is the album before Rumours but for the year and a half between its release in July 1975 and the release of Rumours in February 1977, it was pretty much the only Fleetwood Mac album worth owning. The addition of Lindsey Buckingham and Stevie Nicks proved to be a much-needed spark in the studio and on stage as the band toured doggedly in promotion of the record, spinning off three Top 20 singles onto the Forty-fives chart while the album peaked at #2 for three weeks, kept from Number One by Wings At The Speed Of Sound. But Fleetwood Mac was so good that even after Rumours hit and it hit BIG!, it got re-released in the group's ever-widening wake of success in 1978 although it wasn't until the four-disc Deluxe Edition in 2018 that I grew to appreciate the 1975 album fully. Hearing the single remixes adjacent to their album counterparts as well as the early takes and versions as the songs came into focus in the studio was an incredible experience in high resolution. Almost as good as hearing Fleetwood Mac for the first time all over again.