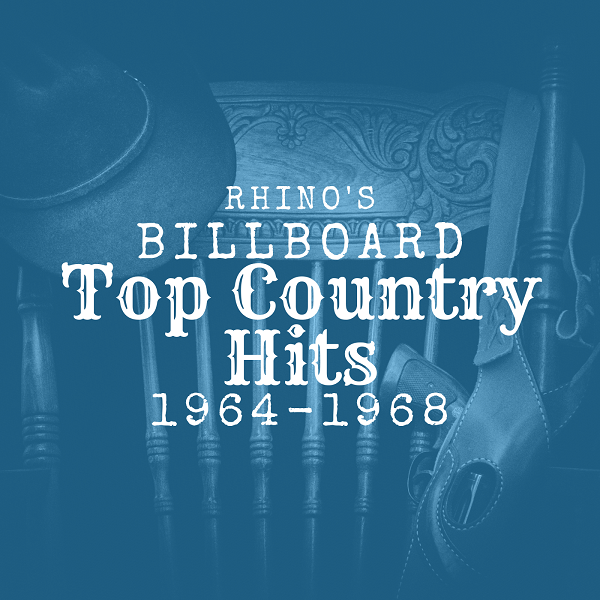 In a preceding piece, we presented the first five discs in Rhino's Billboard Top Country Hits series, covering the first five years of that magazine's country singles chart. Today we're back with the next five, covering the years 1964 through 1968. Grab yourself a sweet tea, hard cider, or a jar of Pappy's corn squeezin' while enjoying these classics of the country genre. 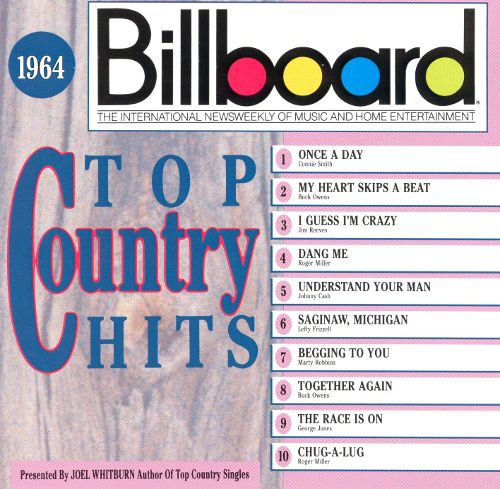 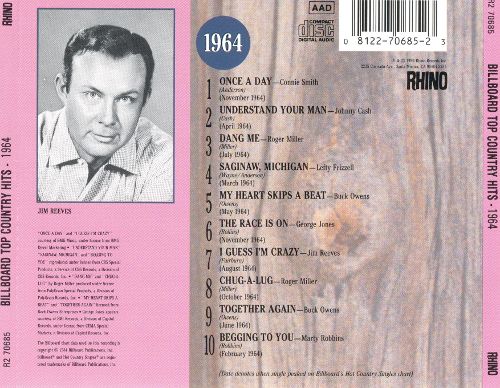 In January 1964, Billboard increased the positions on its Hot Country Singles chart from 30 to 50. Buck Owens' "Love's Gonna Live Here", a holdover hit from 1963 remained Number One on the newly expanded chart though ol' Buck would land the two songs from his first single of 1964 on Top Country Hits 1964 with "My Heart Skips A Beat" b/w "Together Again". Buck's hot streak would continue through the decade with another 15 Number One songs. Roger Miller lands two novelty numbers on 1964 with "Dang Me" and "Chug-A-Lug" while "Do-Wacka-Do", a third novelty track from him that year, and perhaps the most novel of the three songs Miller charted in 1964, missed the Top 10 and this compilation. My favorite track on 1964 is "The Race Is On" from the legendary George Jones. How the song could have been kept out of Number One is beyond me - maybe it was just too country for country radio. I guess some things never change. Jack Jones (no relation to George) concurrently took his bland cover version, cleaned up for the city folk, to Number One on the never-been-more-aptly-named Middle-Road Singles chart. 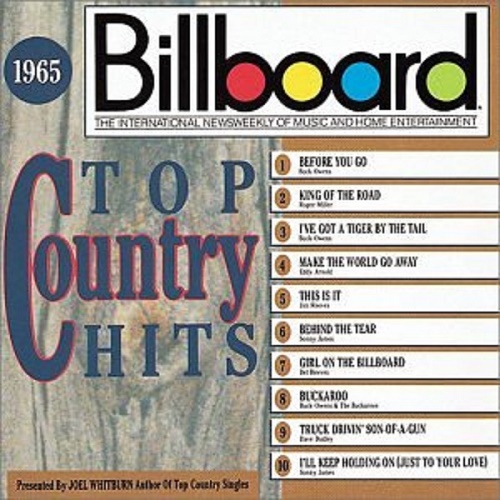 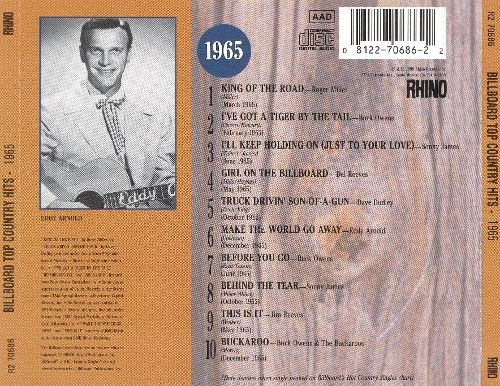 Roger Miller returns with "King Of The Road" to kick off Billboard Top Country Hits 1965. The year was particularly sweet for Miller as he won six Grammy's (all but one of them for "King Of The Road" in various categories) to go along with the five he took home in 1964 for "Dang Me" and "Chug-A-Lug". Sonny James lands two tracks on 1965: ""I'll Keep Holding On (Just To Your Love)" and "Behind The Tear". James would go on a tear between 1967 and 1971 with 16 consecutive Number Ones on the Country chart, including 11 covers of charted Pop hits. Buck Owens notched three chart-toppers on the Country singles charts in 1965 under his own name, then he added his band The Buckaroos to his credits late in the year only to land yet another Number One. All but one of those four songs - "Only You (Can Break My Heart)" - is on 1965. There a handful of contenders for my favorite song on the disc (or cassette, if that's your thing) but the coveted award goes to Eddy Arnold's immortal "Make The World Go Away" which depending on your country music standards and benchmarks may not be the most country song - Arnold is wearing his red smoking jacket on the album cover - but this prime example of the polished and orchestrated Nashville Sound was written by master songwriter Hank Cochran and first recorded by Ray Price so it has a great pedigree yet no one croons it quite like The Tennessee Plowboy. "Almost Persuaded", the Number One country song of 1966, is on Billboard Top Country Hits 1966 as is the second biggest song of the year "There Goes My Everything". Buck, Eddy, and Sonny all return from previous volumes with a single song each as no one double dips on 1966. "Flowers On The Wall" with its distinctive vocal style and instant earworm lyric featuring Captain (Kang) Kangaroo is surely my favorite song among these 10 and I want to say my junior high school barbershop quartet even attempted to sing it after hearing another school's quartet do so but it is a very hazy memory. 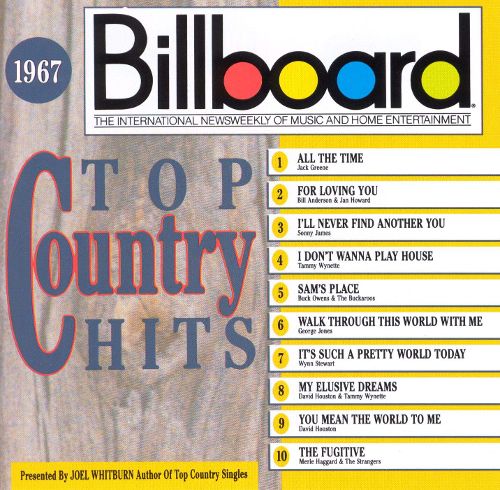 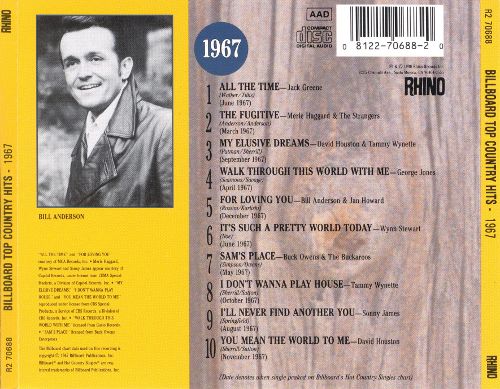 The Jolly Green Giant - Jack Greene - kicks off Billboard Top Country Hits 1967 with "All The Time", the second consecutive pole position for Greene. Tammy Wynette made her debut on the Country charts in 1967 with three singles, including a duet with David Houston featured here. She had covered Houston's "Almost Persuaded" on her 1967 album Your Good Girl's Gonna Go Bad. Wynette is the only artist with a pair of songs on 1967 and her future (ex) husband George Jones also appears with his "Walk Through This World With Me" which Tammy also recorded for the album mentioned above. She would be a superstar before 1968 was through and by the end of the decade, Wynette would be known as The First Lady Of Country Music upon her 1969 marriage to The Possum. My favorite song on 1967 is "It's Such A Pretty World Today" by Wynn Stewart, one of those feel-good tunes that never fails to boost my mood. Would it make it into the mythical Hideaway Honky Tonkin' Jukebox out on the back porch? Probably not. Too many sad, cheatin' and drinkin' songs I'd rather hear. 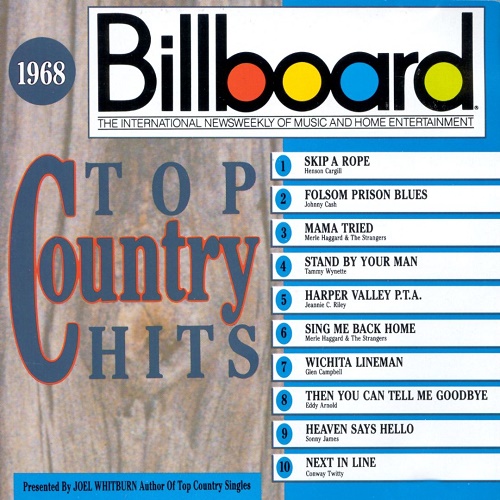 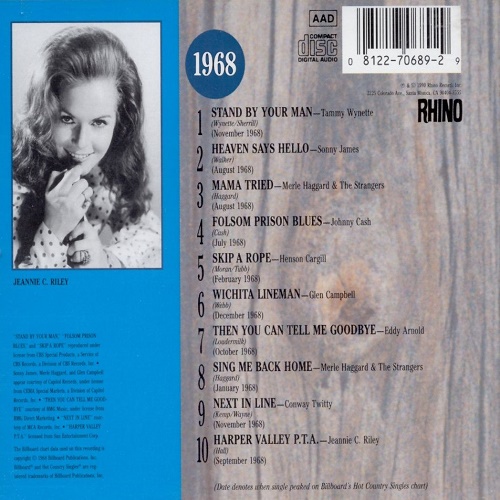 Billboard Top Country Hits 1968 just might be the finest compilation in the series of ten discs that covered 1959-1968. It's not that because all ten tracks are stellar because they aren't but with "Stand By Your Man", "Mama Tried", "Skip A Rope", "Wichita Lineman" AND "Harper Valley P.T.A." on there, you could make the argument that 1968 is the only country disc some folks might need. There were a then-record 23 Number One country hits in 1968, an embarrassment of riches. Haggard is the only artist to have two songs on 1968 with the other being "Sing Me Back Home" and I agree with the compilers leaving Buck off the disc entirely as 1968 was a relatively weak year music-wise for the future Hee Haw co-host. Two Grammy-winning tracks can be found on 1968: Johnny Cash's "Folsom Prison Blues" from his monumental live At Folsom Prison album took home Best Male Country Vocal Performance while Jeannie C. Riley's sassy reading of Tom T. Hall's "Harper Valley P.T.A." won Best Female Country Vocal Performance. Initially, when I sat down to write I was sure that winner of coolest name in country Henson Cargill's "Skip A Rope" was my favorite song on this compilation but as I listened to all the songs, a new front-runner emerged. I'll give it to "Rope" for attitude and gravitas but when it comes to my favorite song of 1968 (the album not the year) I've got to go with Glen Campbell's take on Jimmy Webb's "Wichita Lineman", a song written so well that anyone who sings it sounds like a great singer.