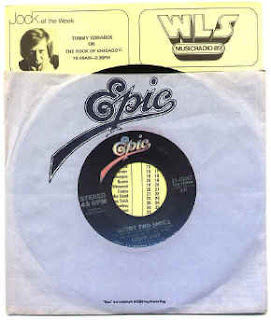 Shortly after WLS switched to a pop music format in May 1960, they published their first Silver Dollar Survey for the week of October 14, 1960, listing the station's Top 40 singles as well as a featured album. By the late Sixties, the Silver Dollar Survey had been rechristened the WLS Hit Parade and through the years the number of albums and singles featured fluctuated though one thing remained constant: one of the station's disc jockeys was featured on every survey. There were no surveys printed from March 1972 thru July 1973 and in 1975, the physical dimensions of the survey changed to 7" x 8 1/2" (half a legal sized sheet of paper) basically doubling in size, allowing more information and advertising to be printed. Another benefit of the new size can be seen in the pic up on the right - the sheet fit perfectly into a 45 sleeve! I picked up my first WLS Music Survey in 1976 and managed to fill a Dingo brand boot box with them before they were tossed out in our move from Rantoul, Illinois to Tucson, Arizona in August 1981. Recently, I was sailing the Seas of Nostalgia and through several eBay Buy It Now deals, found myself reliving the years 1976-1982 via a rainbow of colorful WLS Music Surveys acquired from others. Several are admittedly of the same quality my old collection was: wrinkled, folded and maybe even marked but most definitely used if not abused. I used to fold them up to fit in my pocket and more than a few did not survive the washing machine. Or I would pierce the poor surveys so I could carry them in my three ring binder or Trapper Keeper, though in hindsight I could have just kept them in folders. But I also have a source, a new friend, who has managed to preserve his collection of vintage surveys in pristine, almost museum quality condition. (I hope to tell his interesting story and showcase his immaculate collection soon.) The survey featured in today's post is not from that very special collection but it is in really good shape itself for a piece of paper dated thirty-eight years ago today. 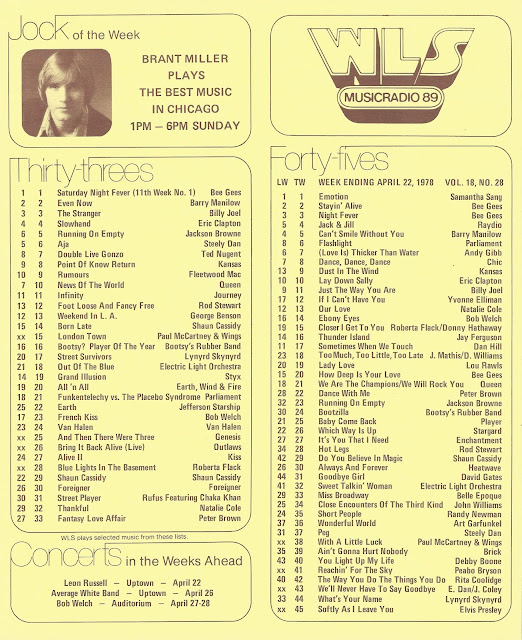 Are you freakin' kidding me?!?!? This is a super-fine 45 song countdown and by my count I have 15 of the forty-fives listed so you know I was all over it back in the day, the week before my 12th birthday and my final month as a sixth grader. The worst song on the list is the Elvis track debuting at number 45. A posthumous single in poor taste and poor quality as Elvis doesn't sing it as much as reads the song's lyrics while one of his back-up singers sings the words.  The song on the list I have not heard in the longest time is probably "The Theme From Close Encounters Of The Third Kind" - I have the 45 and would guess I last played it after the kids and I watched the movie for the first time maybe 18 years ago. Incredibly, Debby Boone's "You Light Up My Life" was in its seventh month on the WLS Forty-fives list and moving up. The Bee Gees have three of their songs in the week's Top 20. Compared to the Top 40s on Billboard and Cashbox that week, WLS was behind the times: the station's Number One song had peaked at Number One on the two trade magazine charts a month prior and though "You're The One That I Want", the first single from Grease soundtrack, was shooting up those two charts and inside the Top 20, the song was nowhere to be found on the WLS list though it would debut way down at number 41 the following week.  And that Debby Boone track? It had fallen off the Hot 100 more than two months before April 22nd, after a 25 week run, including 10 weeks at the top of the chart as 1977 faded into 1978. The chart below compares the WLS list to both the Billboard and Cashbox chart and it ain't pretty.

Did you happen to notice that only one artist has two albums listed in the Top Thirty-threes? He was my sister's favorite artist at the time and she actually tried to runaway to Chicago to see him in concert in March 1978. She was eight years old at the time.
Surprisingly, all thirty three albums on the WLS Thirty-threes list for the week of April 22nd can be listened to via Spotify and I've included them in the countdown styled playlist above, from number thirty-three to Number One! The flip side of the WLS Music Survey was usually home of some cool stuff: 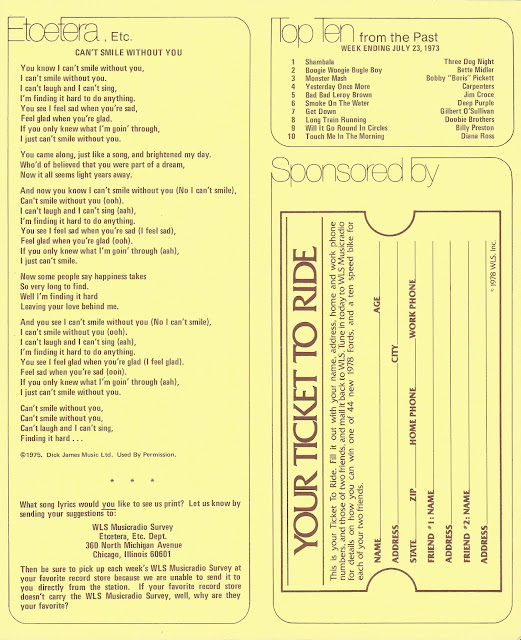 Probably the most important thing to notice on the Music Survey is the tiny print on the front, between the Thirty-threes list and the Concerts in the Weeks Ahead feature. It is a disclaimer of sorts that reads:
"WLS plays selected music from these lists."