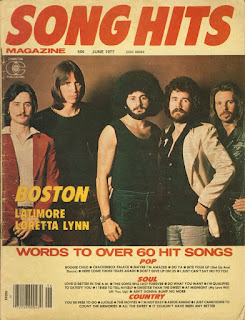 Probably the first music-related magazine I ever bought was Song Hits. I wanted to say it was late in 1976 but after viewing all the covers from that year online, none of them looked familiar so I shifted my search to 1977 and found an issue of Song Hits I do remember buying: June 1977 featuring Boston on the cover, pictured over on the right. For those of you unfamiliar with Song Hits, the magazine is made up of 50 or more song lyrics and maybe a dozen or more pictures of the artists who performed the songs as well as three or more uncredited artist features with photos, usually one each for pop, soul, and country. The rest of the magazine was filled with somewhat shady advertisements. (The publisher, Charlton Publications, also published similar Country Song Roundup and Rock & Soul Songs lyrics magazines.) If you still can't imagine what the magazine is like, here's a video tour of one issue I found on YouTube:
Recently, I was commiserating with a friend about how much I missed my Song Hits magazine collection which was at least a couple dozen issues at one point including regular monthly issues, Annuals, Yearbooks, and Specials. While going through a box still taped shut from our move to this house in November 2000, I came across a small cache of magazines and two Song Hits issues were among them. Thought I would try a little something different using one of those issues here on Mixtape Monday. 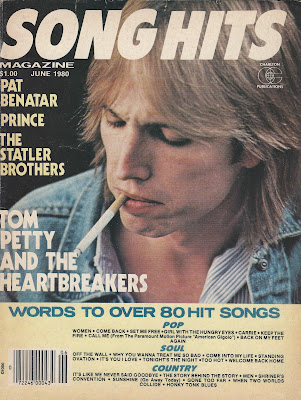 How badass is the cover photo with Petty smoking a lit cig? God bless the Eighties though this looks and feels more like the Seventies to me. In addition to Tom Petty and the Heartbreakers (don't worry, they didn't do 'em like that - though they didn't make the cover, the Heartbreakers are pictured inside, in  a large photo splashed across two pages atop six 2" tall columns of large-fonted text in the first Pop Star Of The Month feature), Pat Benatar gets two pictures and slightly more text in the issue's second Pop Star Of The Month feature. In the Soul Section, Prince is featured in a full page photo and a three-quarter page Soul Star Of The Month feature while a few pages ahead in the Country Section, The Statler Brothers get the Country Star Of The Month treatment. Each artist has a song featured in the corresponding lyrics section as well. 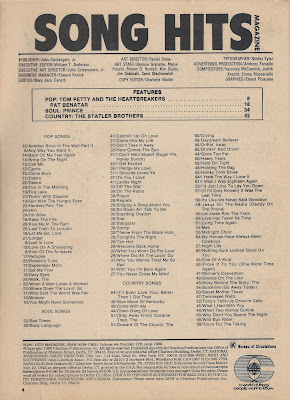 The Index (right) lists the artists I mentioned above as well as all the songs whose lyrics are featured in the issue. On the cover it says Words To Over 80 Hit Songs - how many do you count listed here? I came up with more than 100 songs, with slightly more Country Songs than either Pop or Soul. Even now, almost thirty-six years down the line, I would say about half of these songs are unfamiliar to me. How about you? Yes, there are two streetcars songs named "Desire" in the issue; that is not a typo. But what does this have to do with Mixtape Monday? I created a playlist for each genre section in the issue while flipping through the pages. First up, Pop Songs:


Songs are listed in the order they appeared in the magazine not alphabetically. Unfortunately, a few of the songs are currently unavailable on Spotify. Next up, Soul Songs:
Moving on, here is the Country Songs playlist:

All total between the playlists, I counted 80 songs. Listen to all 80 songs in the alphabetical cross-genre five and a half hour mix below: 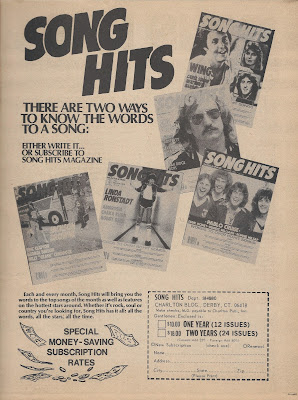 Please let me know if you have any Song Hits Magazine memories in the comments below and if everything goes well, maybe we'll do this again. Not only do I have that other issue, a Song Hits Special, featuring words to over 175 songs, I recently purchased a dozen other vintage back issues of Song Hits from the early Eighties, Including two more Song Hits Specials (each containing more than 200 songs from the Sixties, Seventies, and Eighties) as well as a Song Hits Yearbook featuring lyrics to more than 110 songs from 1981! Gimme some feedback! What would you like to see next?

Here's another issue of Song Hits in a video from the same guy that did the one up above. This one is for a Song Hits Yearbook and is twice as long as his last video: 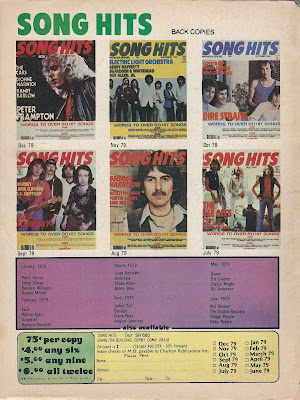 Lastly, here's the back cover of the June 1980 issue of Song Hits Magazine featuring all twelve back copies (instead of back issues) from 1979 available for order at the magazine's previous price point of 75¢; or 50¢ an issue if buy the whole damn dozen at once. So you could subscribe and get a year's worth of Song Hits for $10 or two years for $18 or you could hope and pray that the issues didn't sell out on the newsstand and were returned to the publisher where you could pick up a year's worth of issues for $6 if you didn't mind waiting a whole year or longer to do so.