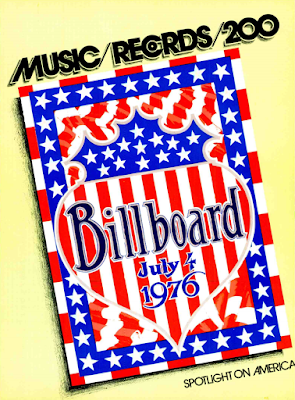 Smack dab in the middle of my tenth Summer, America turned 200 years old. I remember a lot of fireworks, some funny-looking money and everything being decorated red, white & blue. There was also lots of great music to be heard in 1976 and over the ensuing forty years I have come to appreciate even more songs and albums from 1976. As luck would have it, Billboard published an issue dated July 4, 1976 that featured the special supplement pictured above. Let's take a look at the Top 10 on both the Top LPs & Tapes and the Hot 100 charts that Bicentennial Week. 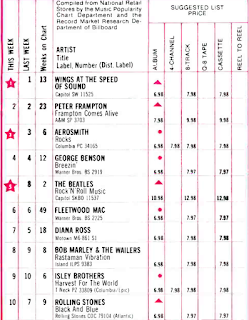 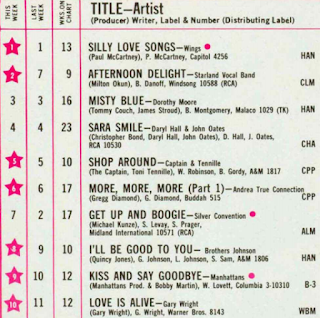 Both are strong and diverse lists, indicative of the vibrant music scene that existed at the time. And dig that crazy LPs chart on the left with 4 channel or quad (?) vinyl, Q4 Tape (quad?) and Reel To Reel tapes. Interesting that Wings holds the top spot on both charts yet no other Top 10 album has a Top 10 single. McCartney's former band also has the number 5 record in the Top 10 and it is one of My Favorite Greatest Hits Albums of 1976. 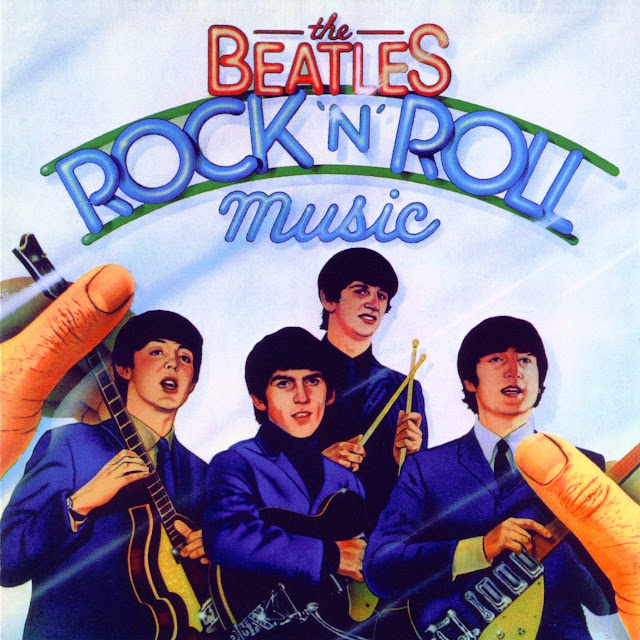 Released barely a month before the July 4, 1976 chart above, The Beatles Rock'N'Roll Music double album was packed with a dozen covers of early rock'n'roll hits as well as sixteen Beatles rockers, all of which had been previously released on various albums, EPs and singles. There is very little overlap in song selection with the earlier "red" and "blue" compilations from 1973; in fact, between the three albums one would have a really good Beatles library with nearly 80 different tunes or nearly 25% of their original recorded output. A "new" single was released from the album - "Got To Get You Into My Life" b/w "Helter Skelter" climbed all the way up to number 7. The album was split into single disc Vol. 1 and Vol. 2 for budget-priced re-release in 1980 - I picked up my copies on sale for like $2.99 new in late 1981. The cover art on the 1976 original is beneath Beatles standards and both Ringo Starr and John Lennon complained about it in interviews. The 1980 artwork was somewhat better but still an illustration. Another difference between the two releases was the master tapes used. I've never heard the 1976 version but the 1980 version compared favorably to the original Beatles albums I had at the time. The album was deleted from the band's catalog in the late Eighties and has yet to be released on compact disc though it is simple enough to cobble together your own homebrew copy from the CDs that have been released. Using the officially released Anthology albums, you can make an alternate version of Rock'N'Roll Music. 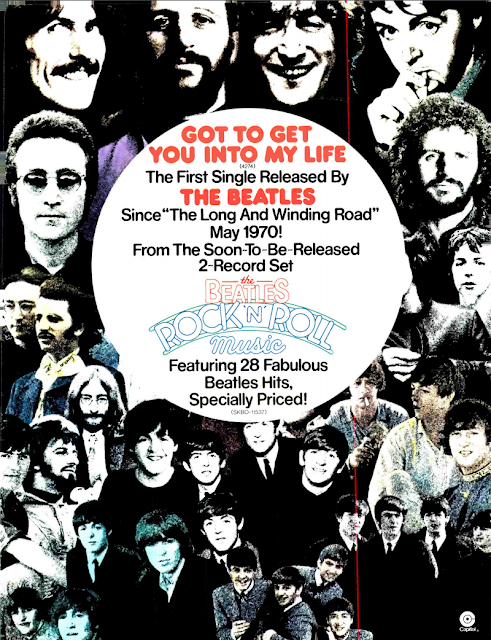 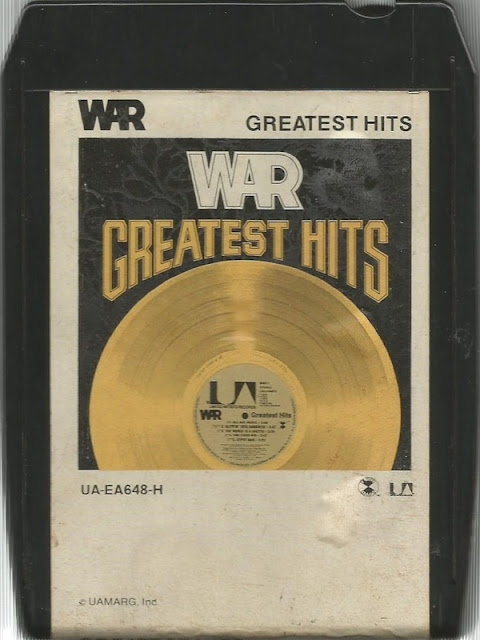 My Uncle Sam had WAR Greatest Hits on 8-track and it is the first place I remember hearing the glorious full-length version of "Summer." Sam's favorite song on the tape was "Cisco Kid" while my Aunt Judy (Sam's older sister) preferred "Why Can't We Be Friends?" Despite some of them being the shorter, single length versions on WAR Greatest Hits, these are my favorite WAR songs. The album was issued on vinyl and 8-track back in 1976 but didn't show up on compact disc until it was part of The Avenue Gold Series in 1995 as a 20bit remaster pressed on a 24K gold disc universally praised for its sound with the remaster credit going to Joe Gastwirt. In 2014, WAR released Evolutionary, their first new studio album in twenty years with a bonus remastered disc of WAR Greatest Hits included. 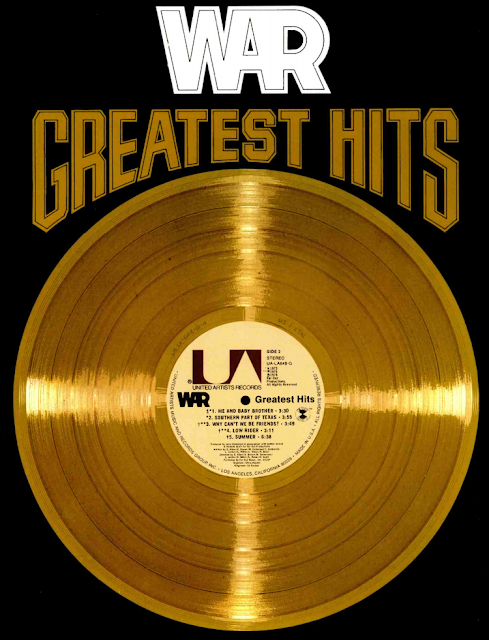 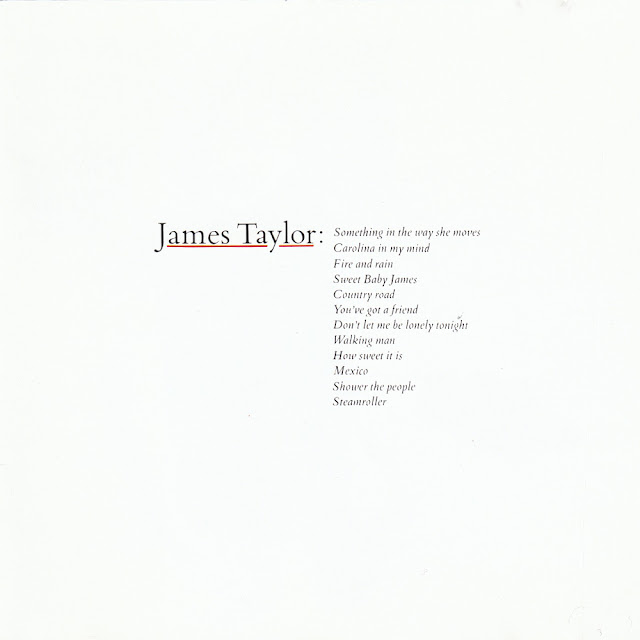 In 1976, I knew one James Taylor song, the "Mockingbird" duet with his future ex-wife Carly Simon. It was a fun song to sing-along to as a kid though nowadays I appreciate the musical backing by Dr. John, Robbie Robertson and Michael Brecker more than the vocal interchange between Simon and Garfunkel Taylor. Also with time I have come to genuinely appreciate the intimate songs Taylor has been writing and performing since 1969. His casual voice, simple guitar and naked lyrics all combine to comfort and sooth my soul. Even his inspired choice of cover versions (he gets credit for suggesting "Mockingbird") are uplifting and often rival the original versions. As is often the case, James Taylor Greatest Hits was released at the end of his relationship with Warner Brothers and was followed by his signing to Columbia. Due to the first two songs being on the Apple label, Taylor recorded new versions specifically for this release. James Taylor's Greatest Hits also ranks as one my wife's favorite albums. 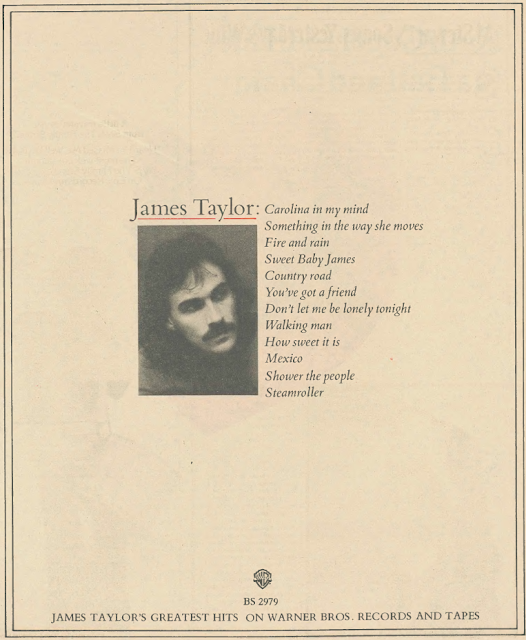 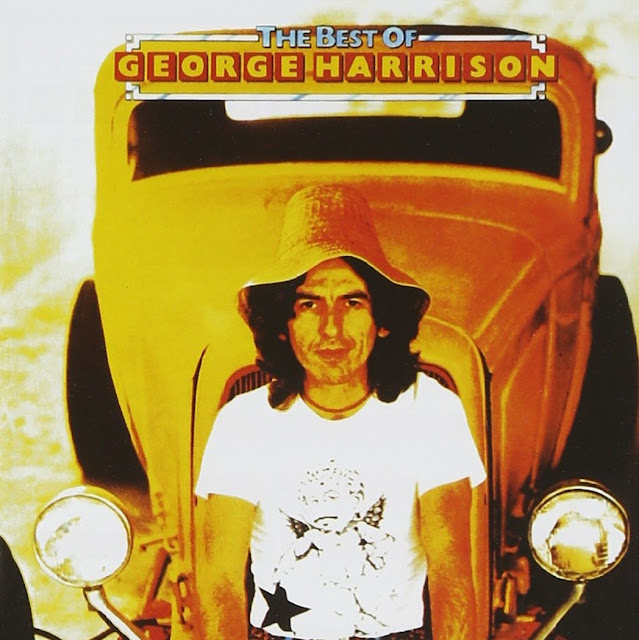 Dad had The Best Of George Harrison on vinyl and I don't think I ever saw or heard him play it. He also owned Harrison's All Things Must Pass as a double tape 8-track with the first two discs on one tape which got played a lot and the third disc on the second tape, which hardly ever got any play. He never bought a Paul McCartney or Wings album but he had Ringo Starr's Ringo and John Lennon's Rock 'N' Roll, both of which got lots of plays as well. But looking back, it is kind of weird that The Best Of George Harrison got no love. It was one of the first albums I ordered when I was briefly a member of some record club (Record Club Of America?) which had no monthly mailings or catalogs but instead claimed to offer any album featured in the Schwann Catalog, which listed the more than 150,000 albums currently in print. The album itself is an unusual hits compilations the first side is made up entirely of seven Beatles songs written by Harrison and the second side features six slices of his solo stuff from his first four albums. It was all I needed until I began buying Harrison's solo albums in the mid-Eighties. The Best Of George Harrison also has alternative cover art though mine appears as above. Like the Taylor release, this was a contract close-out record company cash-grab, following compilations by Starr and Lennon the previous year, though those releases were not padded with Beatles songs. (Starr's Blast From The Past and The Warriors soundtrack were the only other albums I remember ordering from the Schwann Catalog.) The Best Of George Harrison was rush-released just two weeks before Harrison's Thirty Three & 1/ॐ, his first album on his own Dark Horse label. 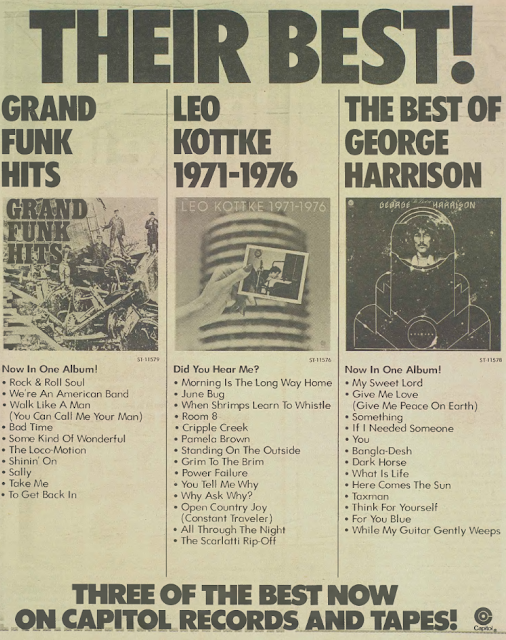 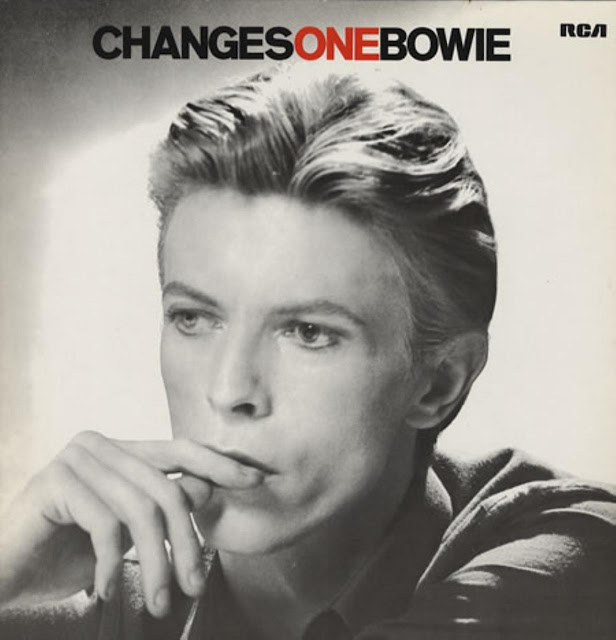 Changesonebowie is that rarest of compilations, the one that gives you all you need to enjoy the featured artist while at the same time stoking the fire of curiosity about the rest of their catalog. In 1976, Bowie was a god among men on the UK and international scene and this sampler secured him many more fans all around the world. For my particular tastes, there are but two tracks I'd swap out: "John, I'm Only Dancing" and "Diamond Dogs" - I'd swap in "Starman" and "Life On Mars?" for those two and add my newest favorite Bowie tune, "Sorrow." Fairly certain the songs are presented in chronological order but please correct me if I'm wrong (that should be The Hideaway's motto.) Followed by K-Tel comp The Best Of Bowie in 1980 and Changestwobowie in 1981 and then replaced by the wonderful Changesbowie CD in 1990. My most spun Bowie collection remains The Singles Collection from 1993 - those Ryko discs are awesome - though if I had to choose only one David Bowie compilation to listen to until the end of my time here on the big Blue Marble, I'd choose the reverse chronological order of the three disc Nothing Has Changed from 2014. 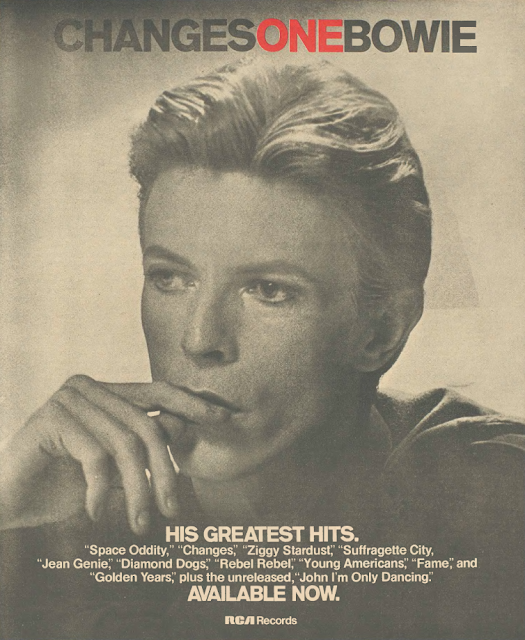 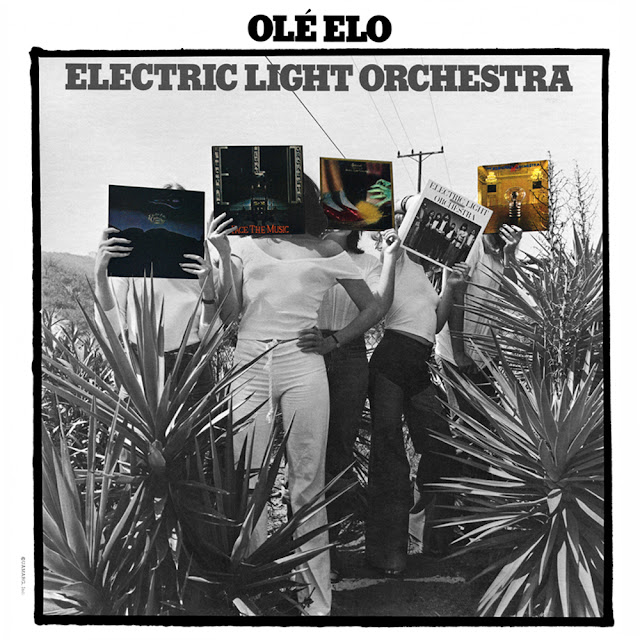 Dad had Olé ELO as well as On The Third Day and ELO's Greatest Hits. I love the album's opening track, "10538 Overture" and have always thought it had a very cinematic sound so I was pleased as punch to hear it used in the trailer for the film American Hustle. (Even more excited that it was actually used in the film.) Many of the full-length album versions of Electric Light Orchestra songs have interesting instrumental intros that get lopped off for radio play and 45 edits. The playlist above features only album versions and so it is not an accurate recreation of the Olé ELO album itself. While it may not be the desert island disc that Changesonebowie is, Olé ELO serves its purpose of introducing listeners to the sound of ELO very well. Its worth noting that the album was originally released as a promo only disc (printed on bight yellow gold vinyl) for DJ Use Only but it was so popular that it began being sold on the down low and United Artists rushed it out for general consumption. 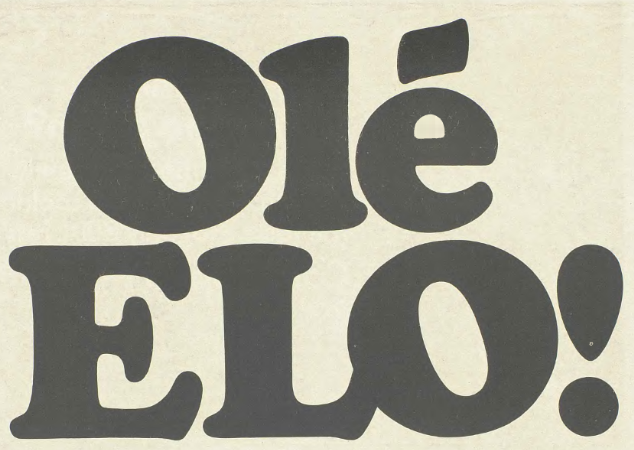 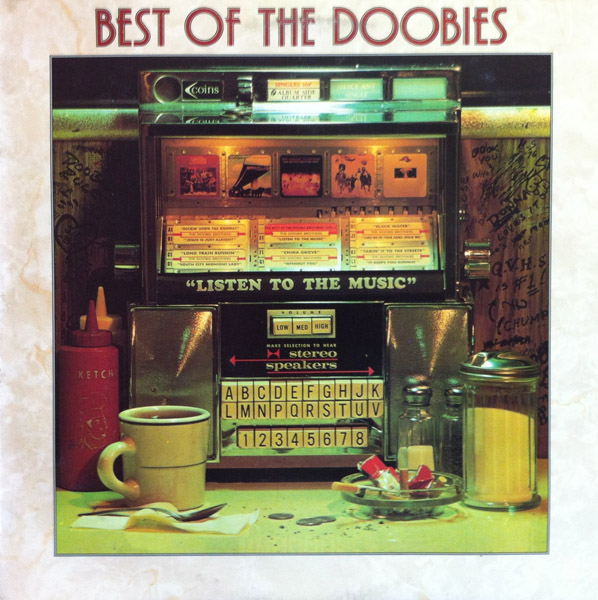 Of all the albums in today's post, Best Of The Doobies was the first one I ever owned as it was in my basket on Easter Sunday 1977. The six tracks that comprise Side One rank among the best first six tracks of any album anywhere which leaves nowhere for Side Two to go but down. Despite the downturn I still love this album 39 years after it first joined my album collection which probably numbered less than a dozen back then. I also love the cover of the album featuring a tabletop jukebox tricked out with the songs from the album as well the covers from the five albums that the singles are taken from. I have only ever been in one establishment that had similar tabletop jukeboxes but they were just for show and didn't work. My question remains, if all the tables in a joint had these and everyone chose a different song, would anyone be able to hear anything? 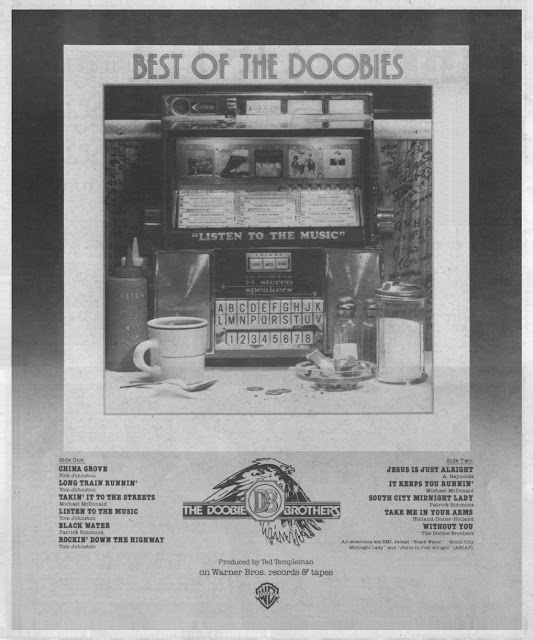 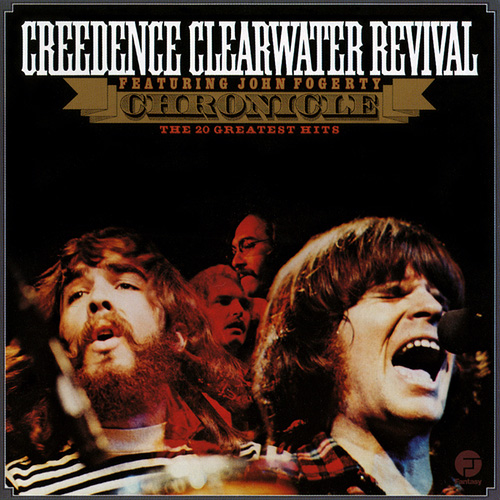 Creedence Clearwater Revival was one of a handful of bands Dad became a fan of during his time over in Vietnam. Upon his return home, he bought the 8-tracks for their two albums Willy and The Poor Boys and Cosmo's Factory, which were originally released just eight months apart in 1969/70. I liked Willie and the Poor Boys well enough - it kicked off with "Down On The Corner" and had my Dad's favorite CCR tune "Fortunate Son" on it. Man, he loved to sing shout that chorus; he totally identified with the sentiment. But Cosmo's Factory made a huge impression on me and it was my first CCR album purchased sometime in 1981 or 1982 when I found a used copy of it at Bookman's. It was scratched on Side Two but a little click-click-click-click didn't dampen my enjoyment of it. Nor did the different running order of the tracks on the vinyl as compared to Dad's 8-track. In 1985, I bought Chronicle and two other CCR albums, including a replacement copy of Cosmo's Factory, as well as The CCR Medley 12" single. Cosmo's Factory is hands-down my go-to CCR album but if allowed to pack a double disker without penalty, then Chronicle is the way to go for this guy. For better or worse, the Fogerty brothers and their rhythm section are probably 95% responsible for my ongoing infatuation with roots rock and Americana. 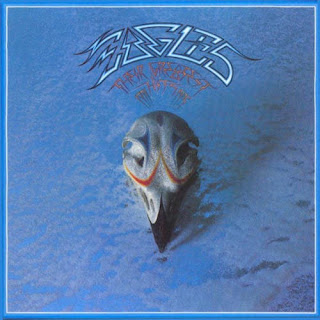 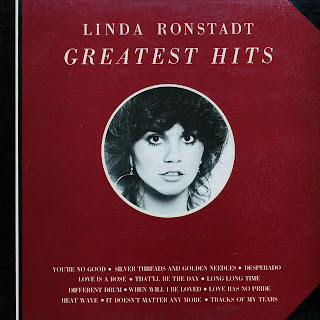 Honorable Mentions from the Class of '76 previously featured here on The Hideaway as part of the Greatest "Greatest Hits" Albums series: 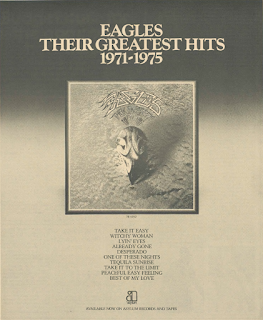 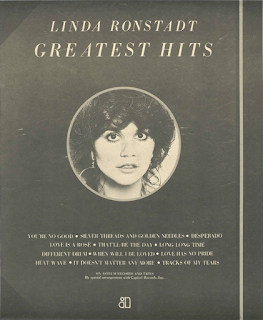