In 1979, Rolling Stone reporter Cameron Crowe posed as high school Senior "Dave Cameron" at a San Diego high school for a semester.  The school's principal initially rejected the idea but when Crowe told him about meeting Kris Kristofferson, the Principal's favorite performer, the deal was sealed.  Despite graduating from high school at the age of 15, when most kids are just beginning high school, Crowe was back in the hallways as a twenty-two year old.  He wrote a book about his experiences and before it was even published in 1981, Universal had optioned the movie rights.  Cameron wrote the screenplay himself and the project was offered to director David Lynch who turned it down, saying it was "not really his thing".  First time director Amy Heckerling signed on to direct and casting began for Fast Times At Ridgemont High. 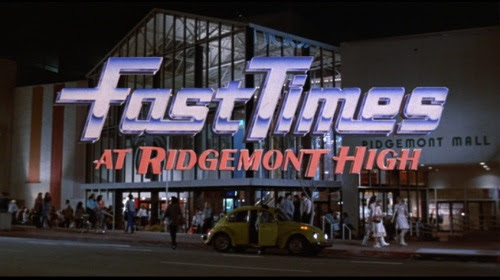 Sean Penn and Nicolas Coppola both read for the role of "Brad Hamilton" but were given other roles: Penn as the perpetually stoned surfer dude "Jeff Spicoli" and Coppola as "Brad's Bud".  Tom Hanks was also considered but the role of "Brad" went to Judge Reinhold.  It would prove to be the 17 year old high school dropout Coppola's first and only film role - in an effort to set himself apart from his famous film-making Uncle Francis, he adopted the stage name Nicolas Cage for his role in 1983's Valley Girl.

The role of "Stacy Hamilton", little sister of "Brad", was offered to Brooke Shields and Ellen Barkin, but they turned it down.  Jodie Foster was also considered for the role but declined in order to continue her studies at Yale.  Diane Lane also auditioned but Jennifer Jason Leigh won the role of "Stacy" and she worked at Perry's Pizza for a while before filming began in preparation for her role.  For "Linda Barrett", best friend of "Stacy",  both Melanie Griffith and Tatum O'Neal were considered.  Justine Bateman was offered the role but she declined to appear in the pilot episode for the television series Family Ties.  Newcomer Phoebe Cates was cast as "Linda" and she began filming shortly after wrapping The Blue Lagoon copycat Paradise, which she refused to promote. Other actors and actresses who had auditioned for roles were Ralph Macchio, Matthew Broderick, Meg Tilly, Michelle Pfeiffer, Lori Loughlin, Geena Davis, Elisabeth Shue, Kelly Preston, Rosanna Arquette, Carrie Fisher and Ally Sheedy.  HERC has read that Macchio was close to getting the role of "Mark Ratner" but his salary demands were too high.  The next year, he'd give a breakout performance in The Outsiders and then follow that up with The Karate Kid in 1984.  The character of "Ratner" is based on student Andy Rathbone that Crowe befriended while undercover.  In 1992, Rathbone wrote Windows For Dummies, a bestseller and has since written 50 additional For Dummies books.  His latest is Windows 8 For Dummies.  Rathbone, who says all the students knew what "Dave Cameron" was up to, sued Crowe after the book was published but dropped the suit a week later after talking with the author who insisted his portrayals were composites and he never meant to upset anyone.

Filming lasted five weeks and included several alternate scenes (like the one above) for future television broadcasts but Universal wasn't expecting much from the first time director, the first time screenwriter or a cast of mostly unknowns and newcomers.  After being tagged with the dreaded X rating prohibiting the target audience of high school kids from even buying tickets, some cuts were performed on the pool cabana sex scene and the film was resubmitted, earning an R rating.  It was released in August of 1982 and went on to earn $27,000,000 in ten weeks and rank #29 for the year.  Perhaps the film's greatest legacy is the national exposure it gave the now classic checkered Van's shoes - until 1982, they were strictly California only.  HERC loves and recommends this movie and has owned multiple copies of it in various formats over the years.  He even wrote about it HERE in a review of films from 1982. 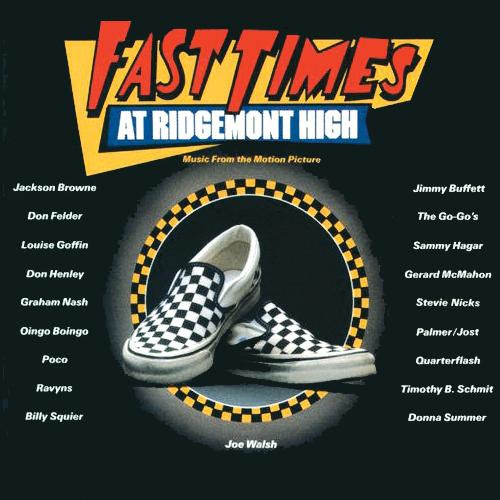 Irving Azoff Executive Produced his third double length soundtrack album in as many years with the release of the soundtrack to Fast Times At Ridgemont High on his Full Moon/Asylum label in 1982.  It was the lowest charting of the three releases, peaking at #54 on the Album charts.  Two singles managed to chart: "Somebody's Baby" by Jackson Browne and a cover of the doo-wop classic "So Much In Love" by Timothy B. Schmit, which was later featured on his 1984 album Playin' It Cool.

Other songs from the album were released as promo only singles for radio station play including "Raised On Radio" by The Ravyns (seen in a rare 1984 video above with a slightly different sounding version of the song) and "Waffle Stomp" by Joe Walsh. 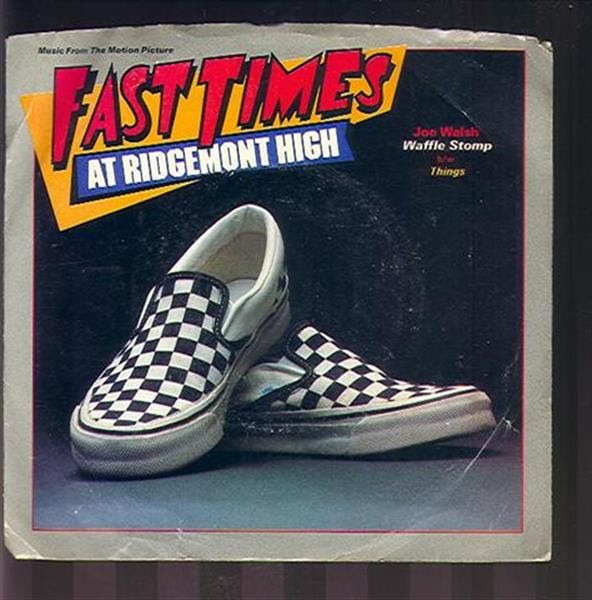 Some songs were even released as singles in international markets, like the Japanese release of Schmit's "So Much In Love" (above) with non-film related picture sleeve.  The b-side is also from the soundtrack, too.  Another exclusive released in other countries was a single disc, 10 track version of the soundtrack album with slightly altered cover art (below) 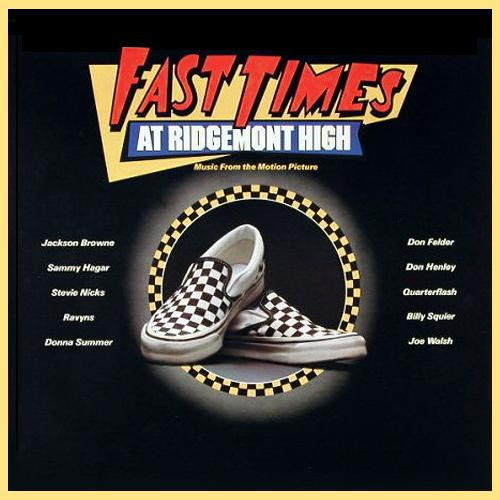 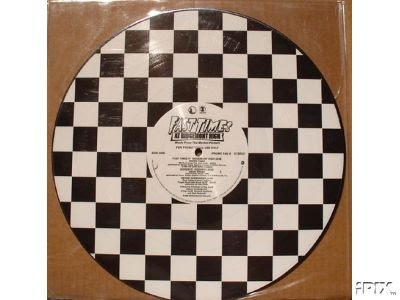 Among the coolest Fast Times soundtrack collectibles is the promo only, checkered picture disc (above) that contained three tracks on each side.  Rarities and collectibles aside, here at The Hideaway HERC is all about the music.  And song for song, he has listened to the Fast Times soundtrack more than either of Azoff's other two soundtrack compilations, Urban Cowboy or HEAVY METAL.  His single most played track is the frantic, rockabilly rave-up that closes the movie: "Goodbye Goodbye" by Oingo Boingo:
One of the biggest complaints about the officially released soundtrack is that it doesn't contain all of the songs heard in the movie including the opening song "We Got The Beat" by The Go-Go's and "Moving In Stereo" by The Cars.  A track each from Tom Petty & the Heartbreakers ("American Girl") and Led Zeppelin ("Kashmir") are also absent from the soundtrack album.  Guess what?  They are all on the playlist below!  Every song from the official soundtrack album, all four songs mentioned above and other songs from the film as well.  Enjoy!

Listen to the
Fast Times soundtrack
on SONGZA

Former ice cream plant worker Martin Maenza can almost recite every line of dialogue from this film - read his track-by-track review and reminiscences of the soundtrack on his blog, Martin's View