HERC is fine.  Sorry he left you without a dope beat to step to a new post for more than two weeks.  While he can't guarantee it won't happen again, he's grateful for all of your concerned inquiries.  And your continued perusals.


Welcome to the most wonderful time of the year, when you can listen to Christmas music everywhere you go.  Through the years, HERC has hoarded collected more than 500 compact discs full of Holiday hits with another 100 or so vinyl discs lurking somewhere in the Audio Archives.  That remodeling project isn't scheduled for completion until after the first of the year but HERC keeps digging out stuff to feature on The Hideaway. Among the vinyl goodies is the series of Firestone Christmas albums that HERC SR. seemingly brought home every Christmas.  Is HERC's mind playing tricks on him or was working at Firestone one of several side jobs HERC SR. took while serving in the Air Force to make a better life for himself, his wife and their two kids?  God blessed us all, every one.  Thanks, Dad.

HERC remembers a time when almost every retailer offered a Holiday CD for sale at check-out.  He has terrific collections from Dillard's, Bath & Body Works and Old Navy in his collection.  New additions to the Christmas section of the Archives this year include annual offerings from retail chains Kohl's (above) and Starbucks (below) as well as superstar solo projects and the inevitable repackaging of classic Christmas music.


But its Monday here at The Hideaway so HERC is proud to present the Now That's What I Call Christmas Collection, the first of several Holiday themed playlists coming your way.  Today's post includes seven albums from 2001-2012, although the music within those collections dates from even earlier. So sit back, get comfortable and read, watch & listen on.  'Tis the Season. 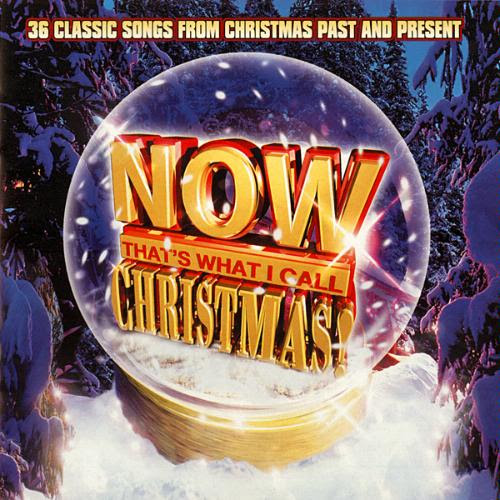 The aptly titled "The Christmas Song", one of the best-loved and most evocative Christmas songs of all-time, was actually written on one of the hottest days in the history of Southern California while the songwriters tried to think of anything and everything that reminded them of Christmas and the cool weather that often accompanies that time of year.  And that's the sad reality of Christmas music - it is often written and recorded in the Summertime rather than Christmastime.  Producers and artists go to great lengths to create a Christmas vibe during sessions such as lowering the temperature in the recording studio and dressing in winter clothes or serving traditional holiday food and desserts.

"White Christmas" is estimated to have sold over 50 million copies as a single since it was first released in July 1942.  (It was recorded in an eighteen minute session in May 1942.)  The sentimental lyrics, the Crosby croon and World War II all contributed to its astronomical sales.  Originally featured in the 1942 film Holiday Inn, the song garnered top billing in 1954's White Christmas, itself the top grossing film of the year.  Due to damage to the original 1942 master, the most often heard version is a near perfect note-for-note re-recording made in 1947.  Along with Bing's version, HERC's favorite versions are the doo-wop version by the Drifters form 1954 and the 1963 Darlene Love and Phil Spector recording which contains the rarely performed first verse of the song as originally written by Irving Berlin:

Possibly the single biggest selling Christmas single of the modern era was released in late November 1984.  A BBC news report on the ongoing famine in Ethiopia compelled Boomtown Rats leader Bob Geldof to phone his friend Midge Ure of Ultravox and together they quickly wrote "Do They Know It's Christmas?" Geldof then shrewdly used a previously booked radio appearance to discuss his plans to record a charity single and gathered prominent British, Irish and a few Americans in a recording studio on November 25, filming and recording the whole project, which became known as Band Aid.  Four days later, the single was released and it went on to become the biggest selling single in the history of the UK charts until 1997 and Elton John's Princess Di tribute "Candle In The Wind", also a charity single.  Live Aid, a day long concert simultaneously staged in London and Philadelphia during the Summer of 1985 yielded the even more superstar-studded but admittedly "cocked up" version below:

HERC did his part by buying more than half a dozen copies of the single in 1984 and giving them as Christmas gifts.  He also bought the full length VHS documentary compilation of the event.  The charitable recording event was recreated in 1989 (as Band Aid II) and 2004 (as Band Aid 20) but the original remains HERC's favorite: 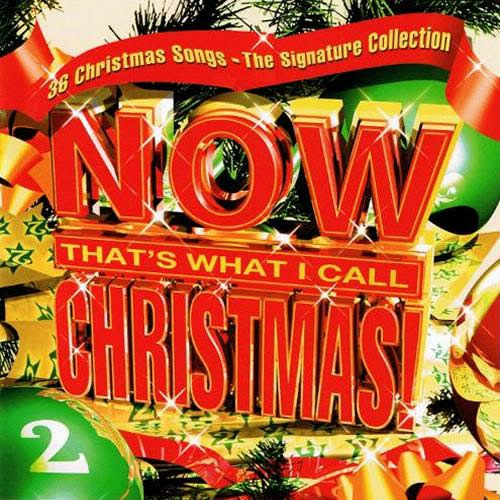 Found on the "Now and Forever" portion of the collection is Elton John's 1973 Christmas concoction "Step Into Christmas".  According to John, it was recorded in a quickie session and mixed to sound like Phil Spector's classic "wall of sound" (see Darlene Love song featured earlier).  Recorded and released during Elton's prolific Goodbye Yellow Brick Road period in 1973, the stand alone single was later appended to the 1985 CD re-issue of 1974's Caribou.

Another new classic on the first disc is Wham!'s "Last Christmas", a bouncy yet ultimately heartbreaking song with a hook that will stick in between your ears for at least a month after the Christmas holidays.  Released in December 1984 shortly after George Michael's participation in the Band Aid project.  Due to an out-of-court settlement because the song's hook was too similar to "Can't Smile Without You" (a song originally recorded by the Carpenters and then Barry Manilow), the entire first year's royalties of "Last Christmas" were donated to Bob Geldof's Band Aid charity.  Michael's Christmas tune is covered year after year by a growing list of others including Taylor Swift, Coldplay, Carrie Underwood, Jimmy Eat World, those jolly kids from GLEE, a relentlessly thumping dance-floor version by Cascada and even an extra verse added version by George Michael himself in 1991.  HERC prefers the extended "Pudding Mix" (below) of the song which is more than two minutes longer than the original single version.

Over on the "Then and Always" disc, there's a live version of Jose Feliciano's "Feliz Navidad".  Yes, he wrote it and originally released it 1970 and he continues to perform it to this day at the age of 67.  The version in the video above is from the wonderful series "Live From Daryl's House" and was recorded in 2010.  (If you didn't recognize him, Daryl is Daryl Hall of Hall & Oates fame.) 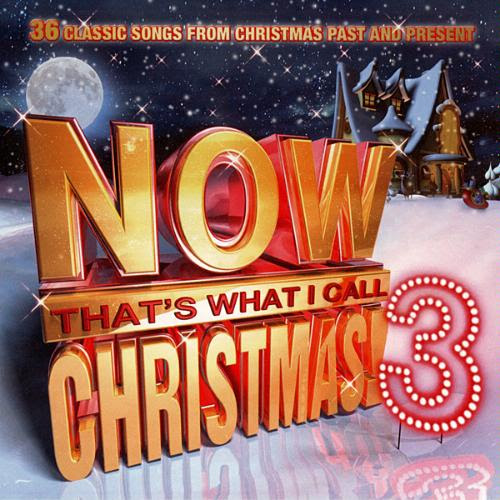 Now That's What I Call Christmas! 3 hit store shelves in early October 2006.  It returned to the format of the first collection: each disc is untitled and disc one has "the oldies" while disc two has "the good(ie)s".  Many of the artists on disc one also appeared on the original Now Christmas and appear here with different songs.  The song in the video at the top of this blog appears on disc one.

Another disc one highlight is "Have Yourself A Merry Little Christmas" by Judy Garland from the 1944 film Meet Me In St. Louis.  Recorded only five years after her star-making turn The Wizard Of Oz, this is HERC's mom's favorite version of this touching Christmas song while HERC now prefers Linda Ronstadt's version.  The Pretenders and the Carpenters also do swell versions.  [Hi, Mom.]

Reinterpreting parts of their earlier hit "Little Deuce Coupe", the Beach Boys released "Little Saint Nick" for Christmas 1963.  It appeared on The Beach Boys' Christmas Album the following Christmas in a slightly different mix and was later covered by Beach Boy Brian Wilson in 2005.  In a case of mistaken lyrification, some people refer to the song as "Run Run Reindeer".  Sharp eyed viewers and HERC knows they are not viewers will note that this track also appeared on the inaugural volume of the Now Christmas series.

The Essential Now That's What I Call Christmas [SONGZA]

Now That's What I Call A Country Christmas [SONGZA]

Returning to the double disc format but still lacking the exclamation point of earlier volumes, 2009's Now That's What I Call A Country Christmas preceded Now That's What I Call Music! 32.  Much like the Now Christmas 2 collection, the older stuff appeared on the second disc while the newer stuff appeared on the first disc.  At least a half dozen of the tracks had been featured on the other Now holiday collections while HERC already had the other songs on still other collections.  Confused?  "These questions and many others will be answered in next week's episode of Soap."

Prior to releasing Now That's What I Call Music! 36, the Now That's Music gang released Now That's What I Call Christmas! 4 in 2010. Thirty-six tracks? Check.  Newer songs on CD 1 with older tracks on CD 2? Check.  Exclamation point restored in title? Check!  Contains more than a dozen songs that have already been featured in the series?  Check.  In 2011, this album was re-released in a Special Caroling Edition featuring lyrics for all the songs.

Probably the most popular Christmas song of the Nineties, Mariah Carey's exuberantly joyful and ultimately triumphant entry into the Christmas Pop canon is "All I Want For Christmas Is You".  HERC loves, loves, loves it and you probably do, too.  WARNING!: Steer your reindeer clear of the So So Def remix from 2000, the 2009 New Dance Mix as well as the 2011 "SuperFestive!" re-recording with Justin Beiber.  Paying tribute to the girl groups that inspired it, Mariah simultaneously released a second, retro looking video for the song:

Taken from the soundtrack to How The Grinch Stole Christmas, Faith Hill's bittersweet and longing "Where Are You Christmas?" is a certified HERC Christmas Classic but do you know the story behind the song?  It was originally written for the 2000 Jim Carey vehicle by Will Jennings and James Horner (who previously collaborated on Celine Dion's love theme from Titanic, "My Heart Will Go On") as "Christmas, Why Can't I Find You?" and is sung by a character in the film.  With additional input from Mariah Carey, a longer more poignant version of the song was written called "Where Are You Christmas?" and recorded by Ms. Carey herself but due to ongoing litigation at the time between her and her ex-husband, the song could not be released.  Faith Hill was given the greenlight and it is her version of Mariah Carey's song HERC knows and loves today.

Who is HERC's favorite of the Christmas Crooners?  Why it's Dean Martin, of course.  His voice, his phrasing and his boozy sense of humor all add up to Christmas Cheer for HERC's ears.  Dean does a funny "Rudolph, The Red-Nosed Reindeer", a playful "Baby, It's Cold Outside" and a delightful "Let It Snow! Let It Snow! Let It Snow!" in addition to this definitive version of "Marshmallow World".  You can keep your Sinatra, your Mathis, your Bublé and your Williams - HERC has got Dino's songs to keep his ears warm.

For 2012, the format of the Now Christmas album was changed to match the regular Now! series: a single disc with 18 tracks from "TODAY'S BIGGEST STARS!"  Released in late September - the traditional start of the Christmas season - Now That's What I Call Today's Christmas does indeed feature songs from popular stars of the day but most of, if not all of, them are available elsewhere.  Several of the artists also appear on Now That's What I Call Music! 44 which was released several weeks later.

HERC's favorite track on the album was originally recorded by progressive metal band Savatage in 1996. Two members of the group along with their producer split off to form Trans-Siberian Orchestra and re-released the song, a hard-rocking instrumental medley of "God Rest Ye Merry Gentlemen" and "Carol of The Bells" they called "Christmas Eve/Sarajevo 12/24". Often mistakingly attributed to Metallica or Mannheim Steamroller, the song was the first in a series of similar sounding songs by the group, like the one below:


Have you been good girls and boys all year long?  Here's your first gift - a 9 hour playlist of all the songs above!