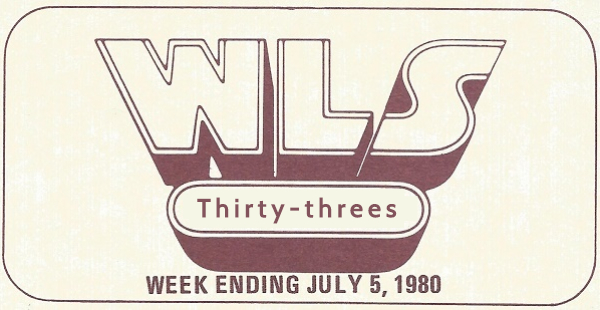 Today we go back to the stack of surveys for much-needed sustenance for the soul and this one looks really good. (Bet it sounds even better.) Ladies, gentlemen and everyone else, I give you the WLS Survey dated July 5, 1980. 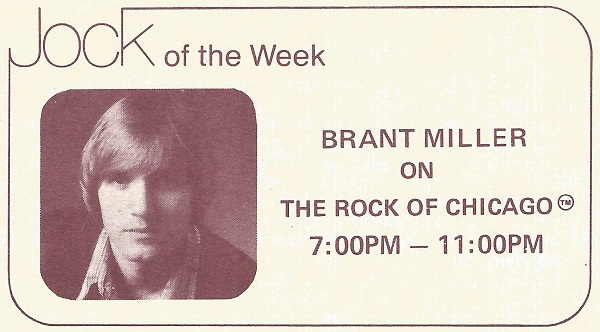 Brant Miller is Jock Of The Week. While I don't recall ever hearing him on the air, Miller made the jump to television as a weatherman meteorologist in 1989 after two decades in radio. Currently, he is the chief meteorologist for a Chicago television station where he has worked for more than 25 years. 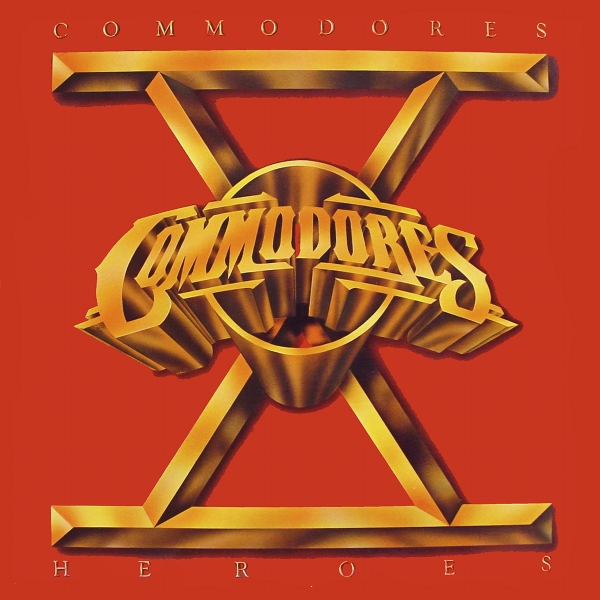 The Commodores were touring behind Heroes, which had only been out about a month at the time though you wouldn't know it by listening to WLS - they weren't playing the singles. Despite the album going Top 10 nationally, it never made the station's list of Thirty-threes. 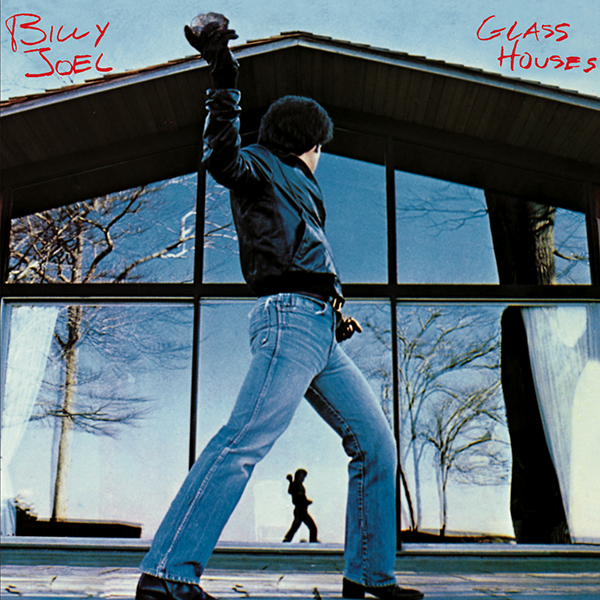 One of the first dozen or so acts to pack them in at the newly opened Rosemont Horizon venue, Joel was on his Glass Houses Tour even though the majority of his seventeen-song setlist was made up of older favorites at the time; only the tour namesake album's four singles, all of which made the Top 25 on the Forty-fives chart, were featured nightly. And at the time of the survey, Glass Houses was in the second week of an eight-week stint atop the Thirty-threes. 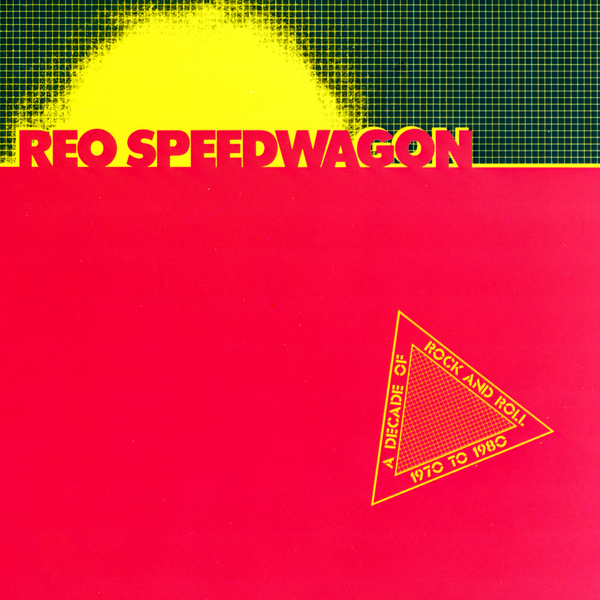 REO Speedwagon was circling back through Alpine Valley after a one-night stand there back in June, touring in support of A Decade Of Rock And Roll 1970-1980, their double-disc career anthology that sat in the Top 10 of the Thirty-threes. My Texas Grandma, Miss Skeeter, would buy me this album on cassette along with the soundtrack to Fast Times At Ridgemont High in the summer of 1982. 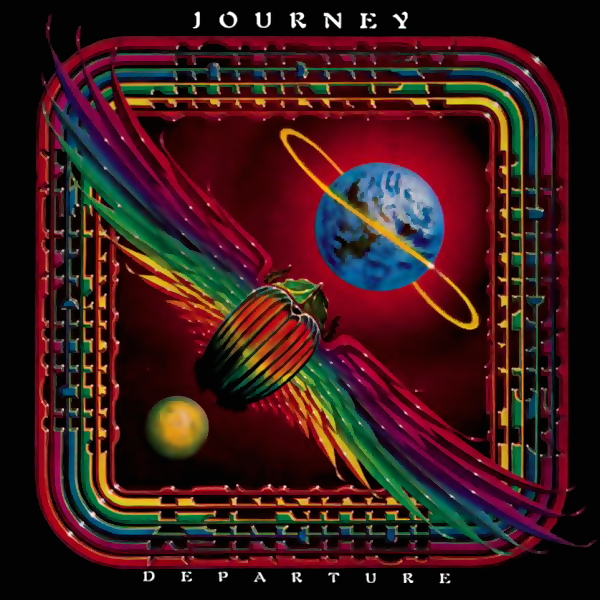 Journey, too, would return to the Chicago area a mere four weeks later in September for an appearance at the Rosemont Horizon though they had already appeared at the venue back in May early in their Departure Tour. I had purchased Departure, which is falling down the chart at number 15 this week, on 8-track because the vinyl album was sold out at Pamida when we stopped in for provisions on our way out of town for the summer. It was the last album I ever bought new in that frustrating format. 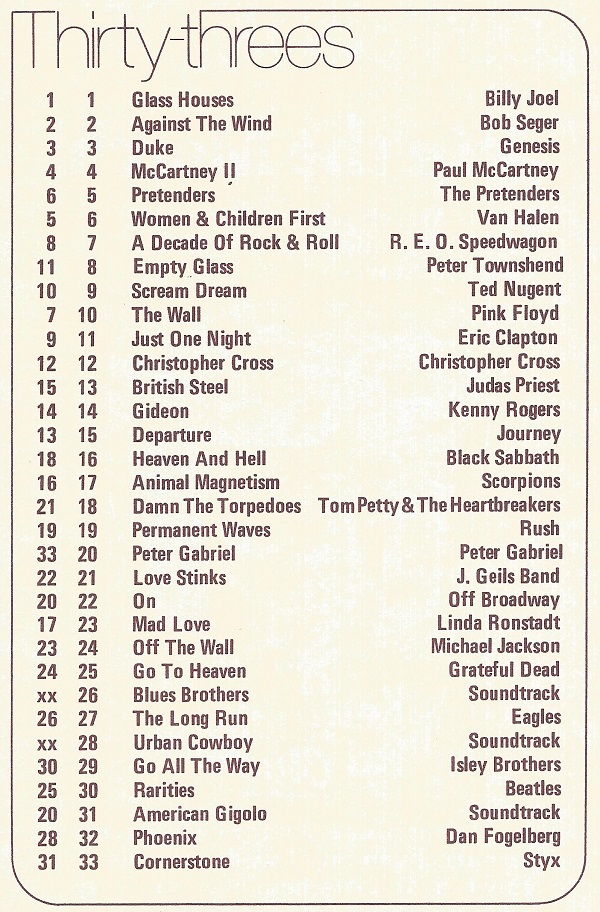 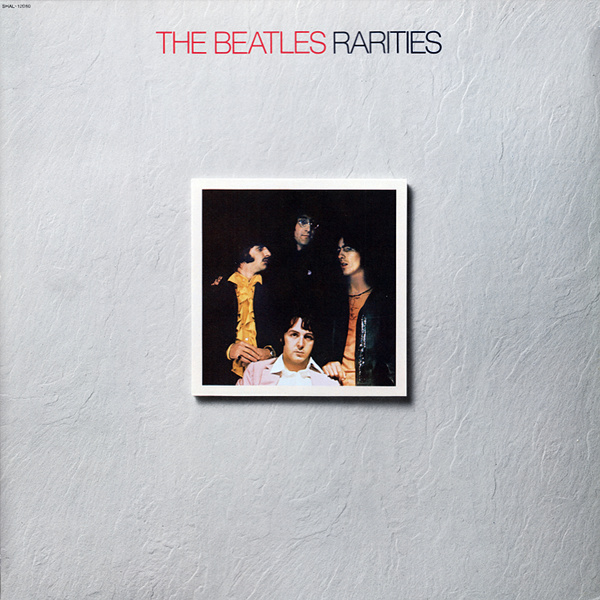 In a post-pot bust interview in Rolling Stone back in May 1980, when all the former Beatles still walked the earth, Paul McCartney is on record as saying Rarities is "quite good" and "quite nice" probably persuading upwards of half a million Beatles fans in America to buy this 1980 collection of odds and sods that were otherwise unavailable on the group's reconfigured US releases. Rarities peaked at number 12 back in April and slipped down to 30 this week on the Thirty-threes chart. The following week, the album would float up to number 29 before leaving the chart altogether. 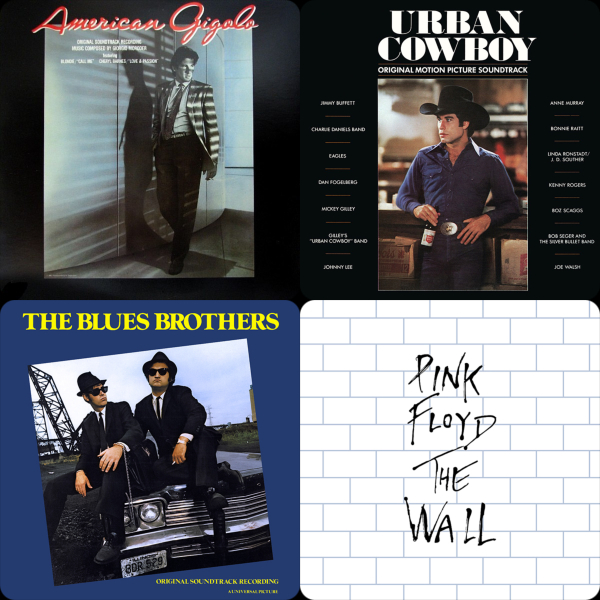 Four motion picture soundtracks are on WLS's albums list this week, including two albums making their chart debut. The synth-driven American Gigolo was down eleven to number 31 while the country-crossover Urban Cowboy debuted at number 28 and The Blues Brothers, which (at best) introduced classic soul music and artists to a new generation, came in at number 26. Up at number 10, Pink Floyd's The Wall was a concept double-album that later became the de facto soundtrack album when a film based on the concept of the album was made in 1982. With the exception of Urban Cowboy, these albums were represented by a single on the week's Forty-fives chart as well.

Soundtrack albums with singles on the Forty-fives chart but nowhere to be found on the Thirty-threes include The Rose, Xanadu, and Caddyshack. Only Xanadu would make an appearance on Thirty-threes, debuting at number 29 on the August 30, 1980, list and peaking at number 2 for the first of two consecutive weeks on the survey dated October 4, 1980, before leaving the station's chart on January 31, 1981, after a twenty-one-week run. Or about seventeen weeks longer than the film's theatrical run. 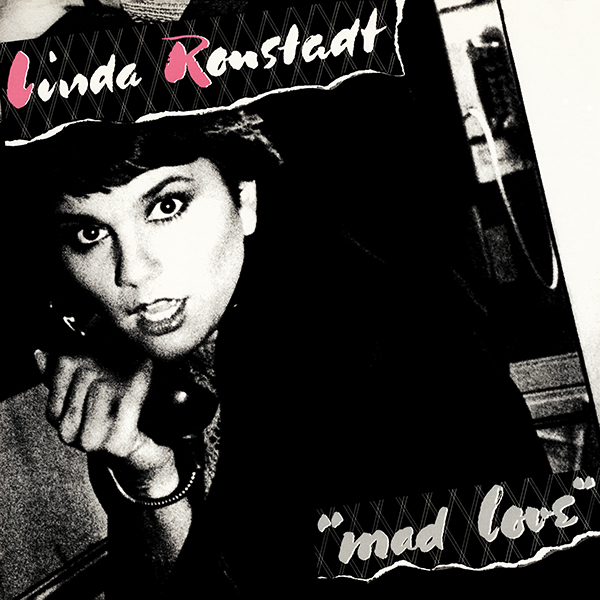 Aside from a few female artists including Anne Murray, Bonnie Raitt, Debbie Harry, Aretha Franklin, on the soundtrack albums above, there are no albums by female artists on the list of Thirty-threes EXCEPT Linda Ronstadt's Mad Love. You know. The one where she cut her hair and kinda went new wavey, covering songs by Elvis Costello as well as Mark Goldenberg of The Cretones. The album has been a Hideaway Favorite since it showed up on Dad's turntable shortly after it was released in March 1980. Mad Love peaked on the Thirty-threes chart in April for two weeks at number 8 and would land three singles on the Forty-fives chart, including her take on "Hurt So Bad" at number 25 this week. 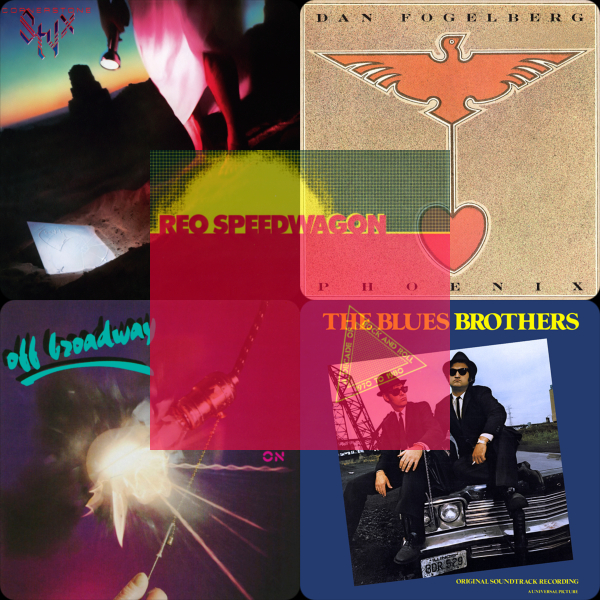 Besides the REO Speedwagon (from Champaign-Urbana) and Blues Brothers (Sweet Home Chicago) albums mentioned above, three other artists charted albums this week have local ties to the Land Of Lincoln. Styx famously blew up when WLS jock Jeff Davis heard their 1973 local single "Lady" on a jukebox in a Chicago pizza joint a couple years later and began playing it on his shifts, propelling the single up to number 2 on the station's Forty-fives chart. Their latest LP Cornerstone had spun off two Forty-fives charting singles and spent thirty-nine weeks on the Thirty-threes list, including two weeks at Number One. Dan Fogelberg was discovered in Champaign-Urbana by Irving Azoff, REO Speedwagon's manager at the time. Fogelberg's sixth album, Phoenix, had debuted on the WLS's album chart the final week of 1979 and peaked at number 3 for three weeks in March 1980. This week at number 32 would be the album's lowest on the Thirty-threes; the following week, it would rebound up to number 30 before leaving the building. Two singles from Phoenix made the Forty-fives and one ("Heart Hotels") was still charting at number 37 this week. Off Broadway came together in Oak Park, which most people outside of Chicago consider part of Chicago, in 1977. The band's 1979 album On peaked at number 101 in Billboard and number 5 on WLS's Thirty-threes. This week it is down at number 22 while the single "Stay In Time" sits at number 31 on the list of Forty-fives. 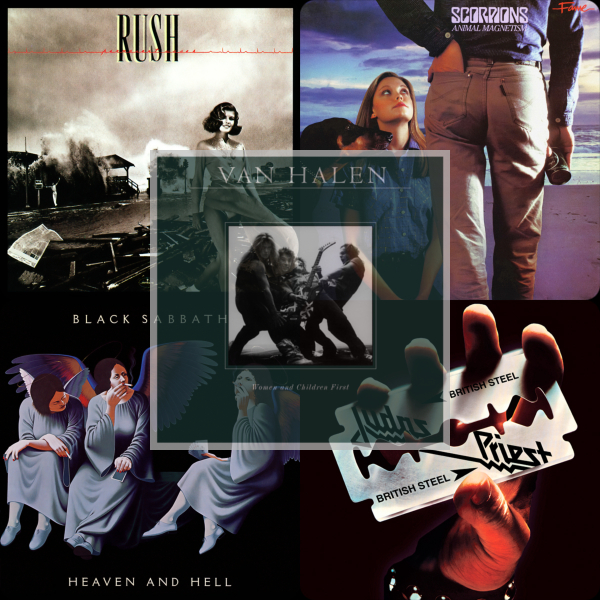 And now, the harder stuff. Five heavy metal albums, not a single on the Forty-fives chart between them* and an average chart placement of number 14 on this week's Thirty-threes. Rush's Permanent Waves spent fifteen weeks in the Top 10 of the Thirty-threes chart, including four of those weeks at number 2 behind The Wall. This week, Permanent Waves was number 19. Animal Magnetism from The Scorpions sits at number 17 with Spinal Tap-worthy cover art and a killer track buried near the end of Side 2 called "The Zoo". Black Sabbath's Heaven and Hell was the band's first album to not feature Ozzy Osbourne behind the mic and it ended up being their third best-selling LP ever. The album is at its peak position of number 16 on this week's survey though it would linger in the Thirty-threes for another fifteen weeks. British Steel from Judas Priest is on the rise at number 13 on this week's list and would peak at number 12 two weeks later. And up at number 6 this week is Van Halen's Women And Children First, the second of two albums Dad "accidentally" received from Columbia House later in 1980 or early 1981. (The first was the American Gigolo soundtrack. No, I do not know why he never bothered to send the albums he did not order back.) Women And Children First spent four weeks at its peak position of number 3 and almost half a year on the Thirty-threes chart. While I bought none of these five albums anywhere near their respective release dates, I would own all of them within twenty-four months as I made the transition from Top 40 to AOR. My pick on this week's list of Thirty-threes is the first J Geils Band album I ever bought, Love Stinks, which I picked up around my 14th birthday in April 1980. Did I buy it for the title track? No. Did I buy the album for the wonderful opening track "Just Can't Wait"? Uh-uh. I bought Love Stinks because I heard "Come Back" on American Top 40 a couple of times in March 1980 in glorious FM stereo and it made a heck of an impression on me. As an introduction to the music of the J. Geils Band, there are probably worse albums but Love Stinks spent a lot of time on my Soundesign stereo where I reveled in the album-length version of "Come Back", a first-rate, high-powered disco-rock hybrid that was one of the first songs I got added to the B100.FM library. Always a thrill when it comes on though I did have to compromise and agree to the single-length version. Love Stinks peaked at number 18 on WLS's Thirty-threes chart in a twenty-week stint though this week it was at number 21 on the chart.

*Rush's "The Spirit Of The Radio" had spent twelve weeks on the Forty-fives chart, peaking at number 16, before falling off in June.