[Before we get started, I'd like to thank ARSA super-contributor Lee Tucker for sharing this survey with poor schlubs like myself. My own newly reassembled personal collection of WLS surveys, which is all but complete from 1977-1982 thanks to a few eBay sellers, stands at a woeful 27% for 1976. March 27, 1976, is not one of the fourteen surveys I have from 1976, so thanks again for the scans, Mr. Tucker, Sir, I couldn't have done this without you.]

WARNING: THIS IS A LONG AND RAMBLING READ.

This week's survey is personally significant because I believe it is the first (or maybe the second one) I ever picked up back in 1976. I really want to say that this was near the end of the third quarter, grading-wise, and I had gotten the best report card possible. This week's post is also significant because it is the first (and so far only) time in the almost six years of The Hideaway I wrote the majority of it longhand, blue ink on spiral-bound college-ruled notebook paper, while my PC was down while we had carpets cleaned. I'd share the pages but they are now an unintelligible mess after editing. Last time out we reviewed the left side of the survey but today we are on the right side and flip side as look at the rest of the WLS Survey for the week ending March 27, 1976. But first, a quick glance at the flipside of the previous week's survey, which I came across while researching this week's post. (Thanks again, ARSA.)

I had never seen anything like this before and don't know if it was a one-time thing or not but I love it. For the record, the Number One Forty-five on WLS the week of March 20, 1976, was number 4 on WAZY, number 3 on WMEE, number 2 on WIRL, number 4 on WROK, number 3 on KXOK and number 4 on WOKY. The flip-side of the survey for March 27, 1976, is also interesting and out of the norm in my experience.

For those of you unfamiliar with the Boogie Check, it was truly a wonderful and, in my experience at least, a unique radio show which may help explain why it had to be taken off the air.


Boogie Check did eventually return to the airwaves, probably with a delay and the last Boogie Check (above) is the format I fondly recall, with the chant: 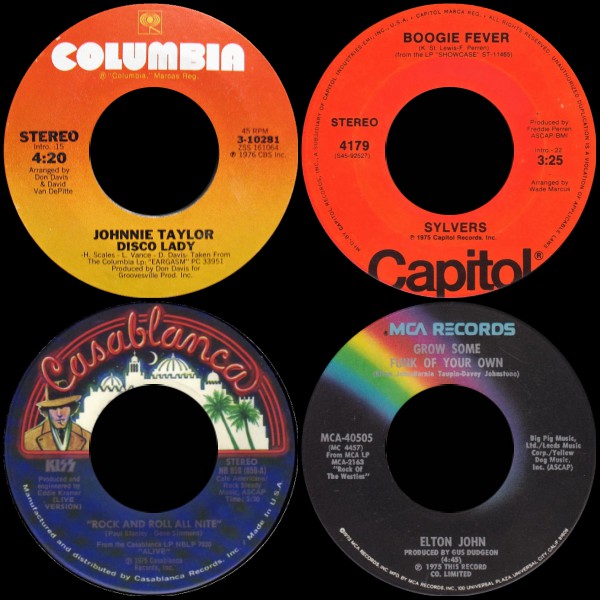 Speaking of boogie, it is one of four musical genres, along with disco, funk, & rock and roll, mentioned in the titles of songs (as pictured above) on the week's Forty-fives chart. Though I don't think Bernie Taupin's lyrics are referencing the genre of funk, are they? 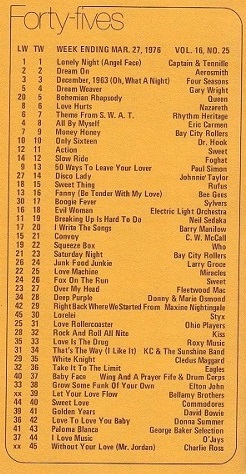 Another musical genre (or more annoyingly a micro-genre), appearing in the Top 40 only briefly, was songs featuring the CB Radio. Two such songs were on the Forty-fives list for the week ending March 27, 1976: 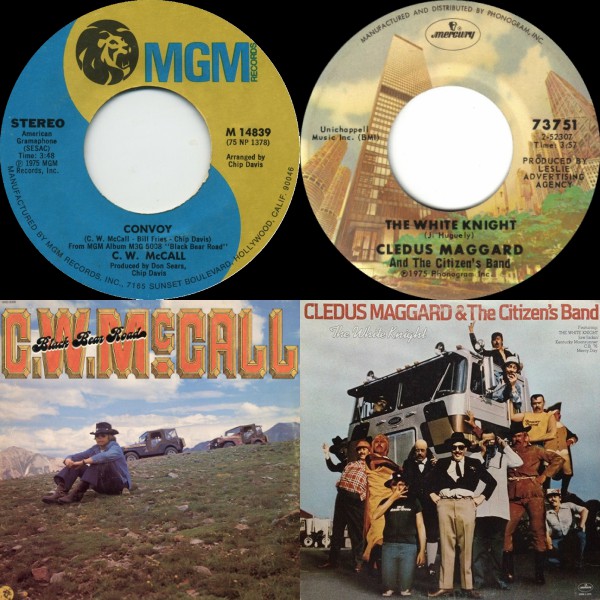 "Convoy" had peaked at Number One on WLS during Christmas 1975 and was still hanging around at number 21 on this list. The song has always been a favorite song of mine, along with the Black Bear Road album. Dad picked up Cledus Maggard's album and I wrote about it HERE. Much later, I picked up the 45 of "The White Knight", sitting at number 35 on the chart back in the last week of March 1976 after hitting number 20 in February, and was surprised to find this 7:15 "long version" of the track. In the time frame 1975-1977, I knew two people who had CB Radios in their cars: Dad and his momma, My Texas Grandma, whose handle was The Red Snapper. She spent a lot of time on the road, driving an hour down to the Gulf to pick up several ice chests full of fresh shrimp from her momma, my Grandma Bertha, who operated "a shrimpin' boat" or trawler. She placed them all in the cavernous trunk and, sometimes back seat, of her navy blue Delta 88 before canvassing Brazos, Grimes and Washington Counties on the way home to Navasota and selling it all at a huge profit. I participated in this venture several times each summer and remember it fondly. As the first-born grandchild by a couple of years, I had the honor of assisting her in bagging the shrimp, retrieving zip-locked bags of shrimp from coolers to complete transactions, and helping her hide fat rolls of $20, $50 and $100 bills in the various nooks and crannies of the Delta 88, her "rainy day money" she called it. My Texas Grandma was relatively young despite being a grandmother to seven "precious grandbabies" by 1976. She didn't turn 50 until 1978 and she was always lively, animated and could talk a blue streak. She loved yapping on the CB and was a gifted, natural flirt; dying her hair bright orange like Lucille Ball's after first seeing a color picture of her in a magazine in the early Sixties only made Grandma more attractive to the unsuspecting men of Texas. Annie Potts portrayal of Sheldon Cooper's beloved Meemaw on Young Sheldon is very reminiscent of my memories of My Texas Grandma; she looks a lot like her, acts a lot like her and sounds a lot like her though I would say Grandma's voice had more of a nasal twang. 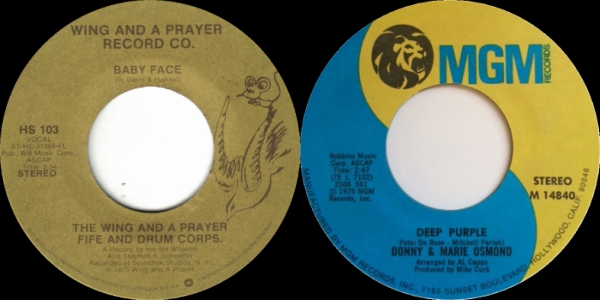 There were four cover versions of previously charted hits on the Forty-fives chart beginning with "Baby Face" down at number 37, up three from the previous week, had first charted in 1926 when four different artists charted with their versions simultaneously. The same thing - four competing versions charting - happened again in 1948. Two more charting versions followed in 1958 and 1962 before this disco version peaked at number 14 on the Hot 100, number 6 on the Easy Listening (AC) chart, number 2 on the Disco chart, number 32 on the Hot Soul Singles chart and number 17 on the WLS Forty-fives chart. Donny and Marie released their cover of "Deep Purple" late in 1975 and its in its third week on the Forty-fives chart sitting at number 28, up six spots from last week on its way to peaking up at number 7. "Deep Purple" had five different versions make the charts in 1939 but the thing I learned about the song is that its most successful release came in 1963 from Nino Tempo and April Stevens. Their record was the 100th Number One on the Hot 100 and it won a Grammy for Best Rock And Roll Recording, beating out Lesley Gore, Chet Atkins, and Little Peggy March. Like Donny and Marie, April and Nino were siblings. 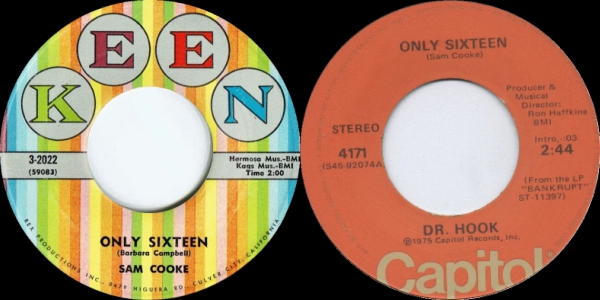 Holding at number 10 on the list for the second consecutive week, Dr. Hook's take on Sam Cooke's "Only Sixteen" would peak at number 7 the first week of April and would be in my collection before the end of the month. Cooke's original was a Top 30 hit on the Hot 100 and Top 15 on the Soul charts although his 45 was released on an infinitely more colorful label than Dr. Hook's version. I was blissfully unaware of any of the controversial lyrics as an almost ten-year-old but the BBC banned the song, apparently not hearing the same lyrics I did.

The final cover version found on the chart (to the best of my knowledge; always count on you guys to set me straight if I am mistaken) is Nazareth's prototypical power ballad and school dance slow jam "Love Hurts", originally recorded by the Everly Brothers in 1960 but never released as a single. Roy Orbison gave the song his trademark treatment in 1961, releasing it as the B-Side on his Number One hit "Running Scared". Nazareth would peak at number 5 on the Forty-fives chart the following week after resting at number 6 for the week of March 27, 1976. The track is an all-time favorite and depending on my temperament at any given time, my preferred version is either Nazareth's or the delicate, fragile and ultimately heartbreaking reading from Gram Parsons and Emmylou Harris. 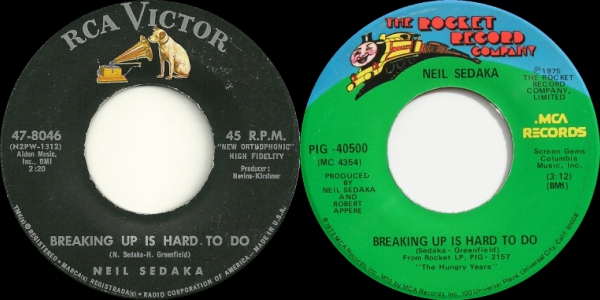 Would an artist re-recording his own song qualify as a cover version? If so, then Neil Sedaka also had a cover version on the chart at number 19 with his smoothed-out take on his 1962 hit "Breaking Up Is Hard to Do". A bit of the older song actually kicks off the remake and has been confusing listeners for decades. There are five parenthetically-titled songs on the chart, including the debut at number 45 of "Without Your Love (Mr. Jordan)" by Charlie Ross, a track I must have put completely out of my mind if I had ever heard it. Amazingly, it peaked at number 42 on the Hot 100 and number 28 on WLS's Forty-fives. I need never hear it again. 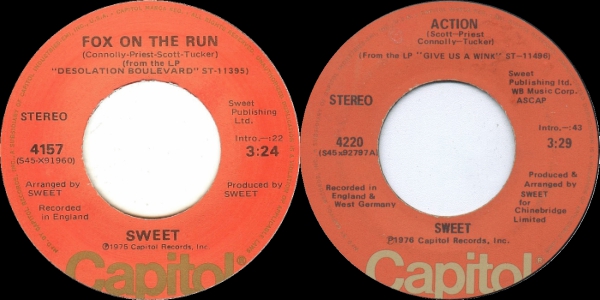 Sweet was one of two acts that had two singles on the list of Forty-fives. "Fox On The Run" had peaked at number 2 in January but had since fallen to number 26 while "Action" peaked at number 11 that very week. Like Sedaka above, Sweet had re-recorded and rearranged the 1974 album track "Fox On The Run" and released it as a 45 then watched as it went Top 10 all around the world. 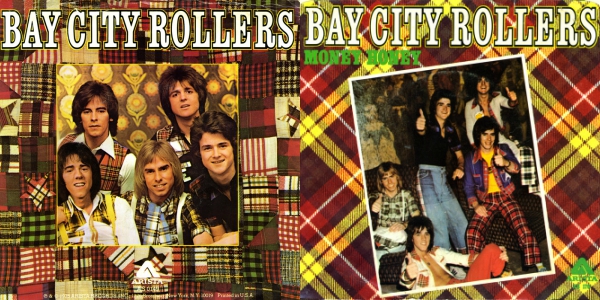 The Bay City Rollers were the other act with two singles, with both songs on their way down the chart. "Saturday Night" was at number 23 after topping the chart in December 1975 and "Money Honey" had peaked the prior week at number 7 and now sat at number 9. They would land six more singles on the survey over the next eighteen months though none would have the backstory of their initial US hit, which had been originally recorded and released in 1973 with lead singer Nobby Clark with no success on the charts. In 1974, the band cut the song again with their new lead singer Les McKeown and when it was released as a single outside the UK in 1975, it shot straight to the top of the charts and Rollermania! hit North America. Both of these Roller singles feature songs with girls names that begin with the letter M as the titles of their respective B-Sides: "Saturday Night" b/w "Marlina" and "Money Honey" b/w "Maryanne". 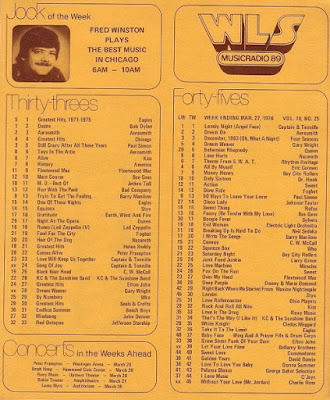 The WLS Forty-fives chart for the week ending March 27, 1976, is very much representative of my musical tastes as a nine-year-old navigating his way through fourth grade in a new school in a new town. In April 1976, I fractured my right wrist playing chase with a girl when we were supposed to be lining up to go back inside after recess, so I learned how to write with my left hand and, two years later, that same girl was my sixth-grade girlfriend for an entire weekend. It was the third time I had broken the wrist and after breaking it yet again as a freshman defensive lineman for the Golden Eagles, my days playing football were over. It's a miracle I haven't had any other problems with that wrist. Knock on wood! Owwww!
-1827-