[Before we get started, I'd like to thank ARSA super-contributor Lee Tucker for sharing this survey with poor schlubs like myself. My own newly rebuilt personal collection of WLS surveys, which is all but complete from 1977-1982 thanks to a few eBay sellers, stands at a woeful 27% for 1976. March 27, 1976, is not one of the fourteen surveys I have from 1976, so thanks again for the scans, Mr. Tucker, Sir, I couldn't have done this without you.]

With all apologies to Fred Winston and his damn fine stache, I have no memory of ever hearing him in the mornings on WLS though I'm sure I must have heard him more than a few times. According to testimony online, he is a living legend known for his booming voice, humor and on-air chaos. Fred still rocks the stache in a shade of grey well-earned and is an active Twitter tweeter as well as an avid photographer though he describes himself as a "Drummer, photographer, voice actor, wino, foodie, coffee head."

[The scans are a little blurry but we're glad to have them.] 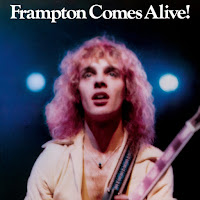 Concert fans had a tough choice on the night of March 20, 1976 - do they go see new hotness Peter Frampton, touring behind his surprise hit double-live album Frampton Comes Alive!, which rises from number 28 to number 22 on the Thirty-threes chart; 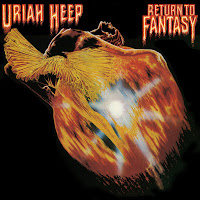 or Uriah Heep (which seems to be misspelled as Uriah Harp on the survey, if I'm not mistaken), touring with John Wetton, who had previously been in King Crimson and Roxy Music and would go on to form Asia in 1981 (the supergroup not the supercontinent);

I have a history with The Heep as they opened for Def Leppard at their notorious 1983 appearance here in Tucson and are returning to perform in April 2018, with Mick Box, their lone original member and founder in 1967. 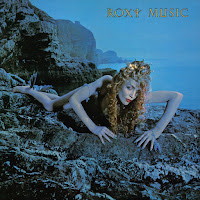 Or see Roxy Music, touring behind their Siren album and their only US hit single "Love Is The Drug" (number 33 that week on the Forty-fives chart), and featuring Peter Frampton's former bassist, Rick Wills, in their live show. The group would disband shortly after their Chicago performance. 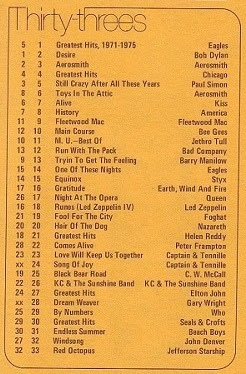 Three artists have two albums apiece on the list: 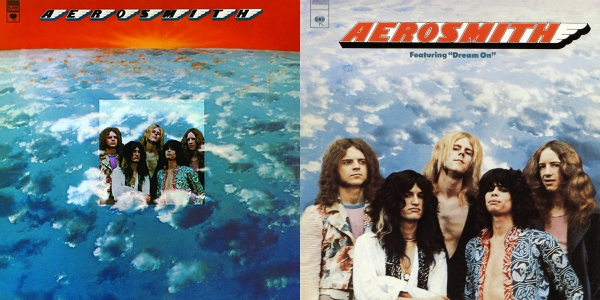 Aerosmith was riding high on the chart with a pair of albums both in the Top 10. The group's self-titled debut was up at number 3 falling from its peak at number 2 the previous week. The album had been re-released with slightly altered artwork following the re-release of the prototypical power ballad "Dream On" in its full-length 4:28 album version rather than the initial 3:25 single edit from 1973, finding greater chart success the second time around and sat at its peak of number 2 on the list of Forty-fives. The band's most recent album, the instant classic Toys In The Attic, was at number 6 that week. 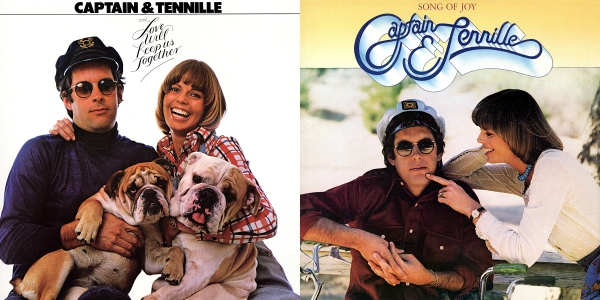 Both of Captain & Tennille's albums up to that point sat in my collection thanks to the suckers fine folks at RCA Music Service. On the Thirty-threes chart, they sat back to back at numbers 23 and 24 respectively, with Song Of Joy debuting that week propelled by the success of the first single, "Lonely Night (Angel Face)", which would become my favorite song the following week. Like the duo's first smash hit "Love Will Keep Us Together", "Lonely Night (Angel Face)" was also written and originally recorded by Neil Sedaka. It is my humble opinion that Daryl and Toni bested Neil's original recordings by a factor currently immeasurable without using top-secret alien technology. Their arrangement on the latter single is killer. 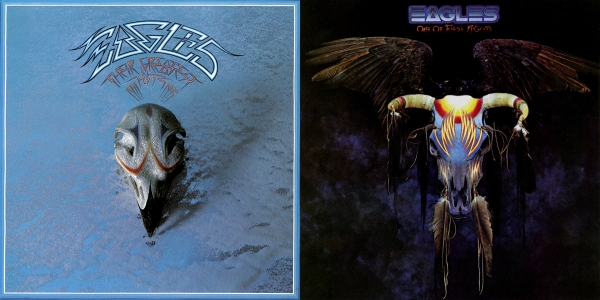 The Eagles took it to the limit with One Of These Nights, one of my all-time favorite albums, on the rise at number 14 and their Greatest Hits 1971-1975 album leaping up to Number One from number 5. Both of these albums would soon be in my collection when they were added to the RCA Music Service catalog later in the year. (Or early in 1977. And what's the deal with the stylized animal skulls on the covers of both albums?) Besides the Eagles hits album which runs neck and neck with Michael Jackson's Thriller as the biggest selling album in the States, there were seven other hits compilations on the chart:

Chicago IX: Greatest Hits holding steady at number 4, History: America's Greatest Hits at falling one spot to number 8 and M.U.: The Best Of Jethro Tull also dropping just one position to number 11. I'd always wondered what the M.U. stood for and now that I know, I'm not satisfied with the answer which is probably why only the first two albums still reside in my album collection and I waited until 1985's Original Masters before picking up a Jethro dang Tull compilation. 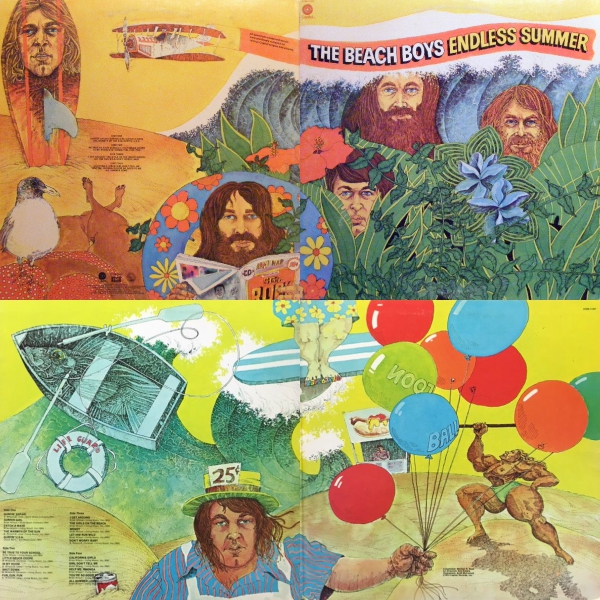 Down at number 31 was Endless Summer from The Beach Boys. Awesome album, one of the best compilations of truly great hits by any artist. A year later, this 1974 release was still on the Thirty-threes chart, as were Greatest Hits 1971-1975, Toys In The Attic and Frampton Comes Alive. Besides Frampton Comes Alive, there were two other concert mementos on the list of albums for the week ending March 27, 1976: 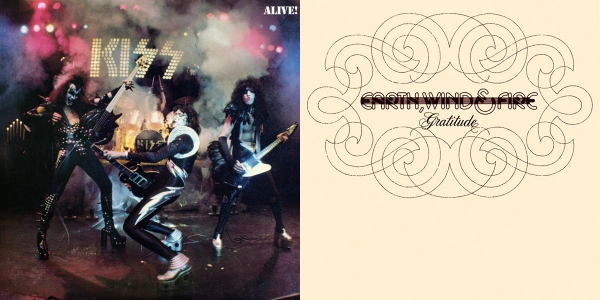 KISS's Alive! was at number 7, down one from the previous week and Earth, Wind & Fire's Gratitude moved up one place to number 16. Paul Stanley's intro is edited off the single for "Rock And Roll All Nite", on its way down the Forty-fives chart at number 32. My friend Charles had the 45 - or rather his older brother, Tony had it - and I remember it had a different Casablanca label than I would see later on my Donna Summer and Village People 45s. And it had the same song on both sides of the single, one the studio version from Dressed To Kill and the other the edited live version lifted from Alive! (My copy of the 45 is pictured at the bottom of the graphic below.) 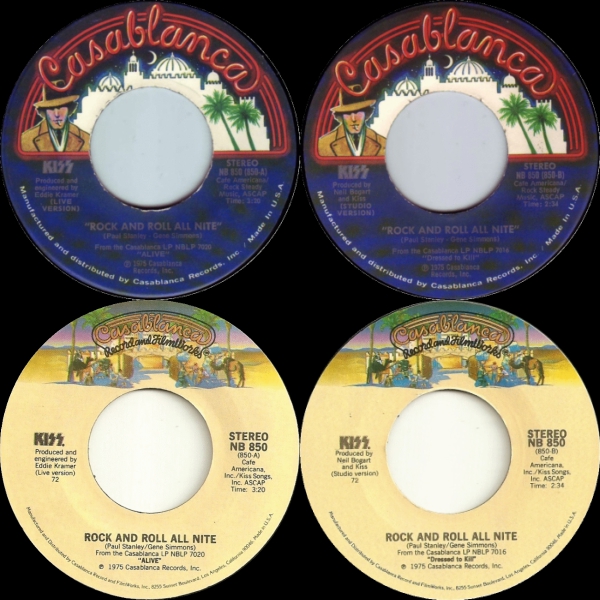 Technically, Gratitude is only 75% live. The four songs on Side Four of the original vinyl album were studio recordings and among that quartet of songs was the album's first single, "Sing A Song". After peaking at number 12 in January 1976, "Sing A Song" fell off the Forty-fives chart the week prior to March 27, after a fourteen-week stay. 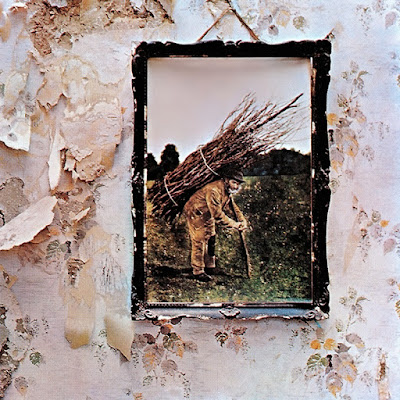 Now that I've spent way too much time discussing 45s in this supposedly Album-themed post, I'm going to end today with my spotlight album of the week: Led Zeppelin's fourth album. Variously referred to as Runes, IV, Zoso, or just Led Zeppelin, the album was the band's fourth in thirty-five months and was released without the band's name, their image or a title anywhere on the cover art. I picked up my first copy, used, at Bookman's in the Spring of 1983 after Elvia, a kinky-haired flower-child I sat behind in study hall, asked if I had heard it. I said I knew it was the "Stairway To Heaven" album but then she told me it was so. Much. MORE. Every single track has affected me in the intervening years. It is probably one of my Top 10 albums ever and I came to it a dozen years after it was released and still find solace within its grooves. The album was the second ever compact disc I bought after Bruce Springsteen's Live/1975-85 triple-disc box. And it would be another six weeks before my closest friends all pitched in and bought me my first CD player for Christmas 1986. When it came time to seed my three young (ages 10, 7 and 4) children's compact disc collections in the late Nineties, I bought them each a copy of this album, along with Prince's Purple Rain and Paul's Boutique by The Beastie Boys and The Dust Brothers, with the rest of the discs in their collections tailored to their individual tastes. You may not like Led Zeppelin's fourth album or maybe you do - either way is fine - but I love it like I love the sun and the rain. It's elemental and essential to my very being. It's two o'clock in the morning as I type this and I am alone in the house with the volume turned up to top dead center which is incredibly loud any time of the day and, just as I've done for the past thirty-five years, I am air-drumming along to "Stairway" with such effort and dedication that sweat is pouring into my eyes and running down my back. And now I have to replay it and this time play along on my air guitar. And then its over.
-1501-