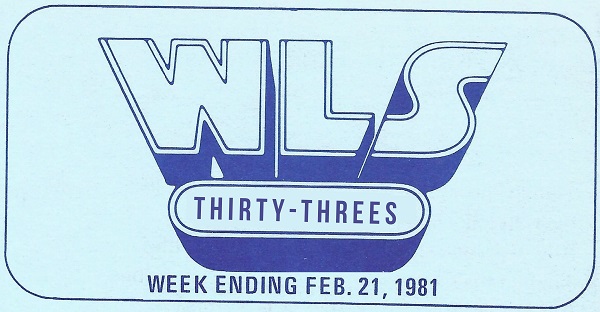 Yes, the image is noticeably crooked but that was the way my copy of the survey was printed and cut. The scanning and cropping had nothing to with it though with some effort I probably could have made it less tilted. Besides, it best represents my worldview today. Slightly askew. We are huddled here today, to review the WLS Thirty-threes chart from thirty-seven years ago today, the week ending February 21, 1981. We begin, as we usually do, with the Jock Of The Week. 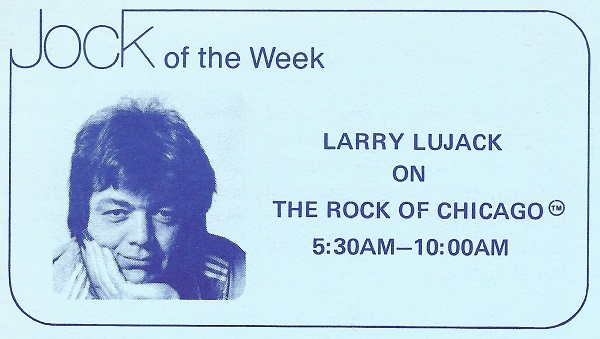 It's always an honor and a pleasure to feature Superjock Larry Lujack whenever we can, and he was the WLS Jock of The Week for the umpteenth time on this week's featured survey. I've recently re-discovered the joy of Uncle Lar and Little Tommy's Animal Stories thanks to the generosity of a good friend of The Hideaway whom I cannot thank enough. (Thanks again!) Another really good friend has loaned me their treasured, mint condition copy of Lujack's disavowed Super Jock but I think I might return the book unread after reading that it's 1975 publication was one of Lujack's few regrets in life. But aside from Lujack, the attention grabber for me in the graphic above is The Rock Of Chicago™. 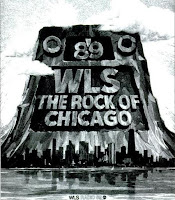 At the dawn of the Seventies, before I started listening in 1975, WLS adopted the slogan The Rock Of Chicago™ for a few years before moving on to newer and different promotions. As the Eighties began, WLS had emerged as a leading rock station once again, with its playlist sometimes referred to as Rock 40 rather than Top 40, so management rolled out The Rock Of Chicago™ branding once again. I began listening to WLS as a nine-year-old and would hear my final broadcast from the station six years later on the night before we left Illinois in July 1981 on our way to a new home and a new clime in southern Arizona. 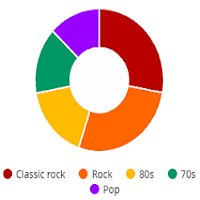 The rock leanings of WLS influenced my musical tastes profoundly and the first two stations I found here in Tucson - KLPX and KWFM - continued to nurture, influence and develop what is still my most-listened-to genre all these years later, according to my last.fm scrobbling report for 2017.

While I cannot speak to the quality of the Chuck Mangione show (my only Mangione live experience is his double album An Evening Of Magic - Live At The Hollywood Bowl which I really like), the other three acts appearing on this week's Concerts In The Weeks Ahead listing are legendary live acts. Well, Hall of Famers Rush and the Dead are certainly legendary as their three-night stands attest though Styx may have been at the top of their live game touring behind their third consecutive triple-platinum album, Paradise Theatre. 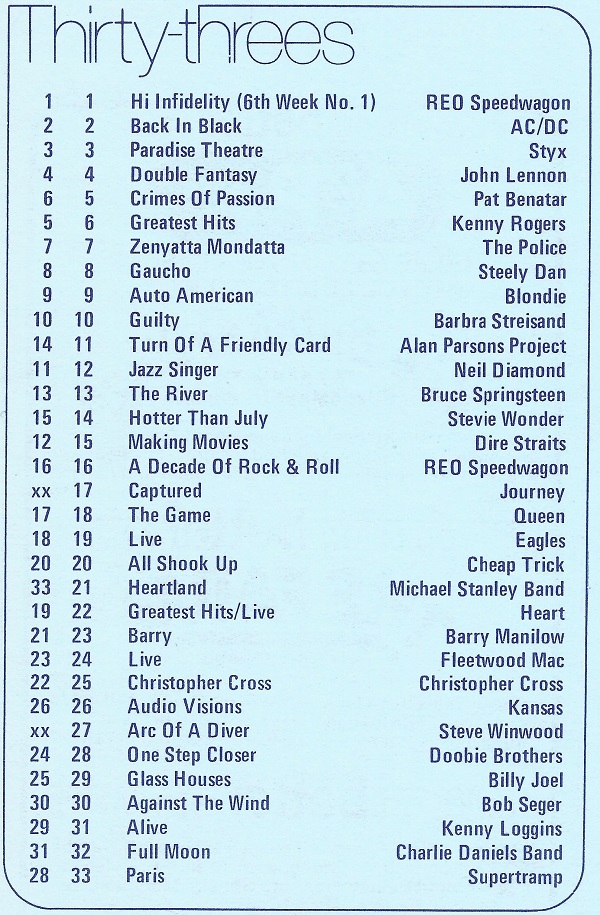 The Thirty-threes chart rocks with six live albums in the bottom half of the list, with all but one on a downward slide: 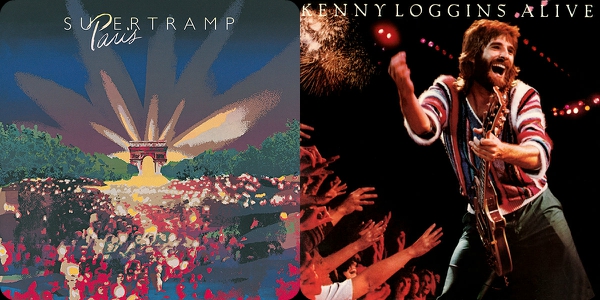 Supertramp's 1980 concert memento Paris had been recorded entirely during the group's 1979 Breakfast In America Tour stop in the titular city. Somewhat surprisingly, only three tracks from that studio album made it onto the double live album though it is an excellent document of the band's earlier, lesser known in America at the time back catalog. The single "Dreamer" had an eight-week run on the Forty-fives chart back in late 1980 and the first two weeks of 1981, peaking at number 35 though it was a Top 20 hit nationally. Just above Paris at number 33 on the chart is Kenny Loggins Alive at number 31, and while I am a fan of his studio work, Alive does nothing for me. 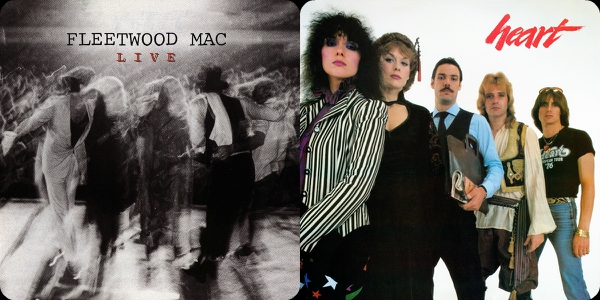 After their self-titled 1975 album and Rumours, Fleetwood Mac Live (number 24) may very well have been the last Fleetwood Mac album Dad bought. Or rather received. His copy, now on my shelf, clearly states Manufactured by Columbia House Under License on the back cover. While I all but ignored the 1980 double-album assembled from at least ten different performances for years, I found out in the late Eighties that one of the songs - "Never Going Back Again" - had been recorded right here in Tucson and gave it a spin. Have only listened to it a few times since. Heart's Greatest Hits/Live (number 22) is a double-disc compilation featuring two sides of the band's greatest hits and two sides of live tracks recorded at various venues, laced with three new studio recordings. One of those studio recordings, a cover of Aaron Neville's "Tell It Like It Is" was sliding down the Forty-fives chart this week from number 25 to number 29 after peaking at number 19 a few weeks earlier. I ordered Greatest Hits/Live from Columbia House a few years after its 1980 release when it was featured as part of one of their Clearance Sales and played the everloving crap out of those first two sides, with Ann Wilson's voice riding over those rocking riffs. 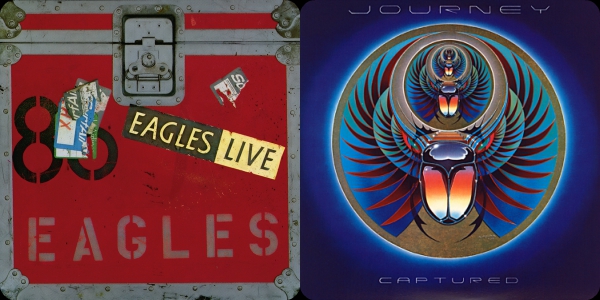 The contractual obligation that is Eagles Live was a favorite of Dad's and I like it a lot, too. And like Dad, I prefer to play the 1980 release out of order, beginning with the second disc and the sweet harmonies on their cover of Steve Young's "Seven Bridges Road" (the album's lone single, which I don't recall ever hearing on WLS) and playing it through, lifting the needle before the groove locked at the end of "Take It Easy", then running through disc one and ending with Joe Walsh's "Life's Been Good" with the modified lyrics "Everybody's so different/we're all insane". Eagles Live sat at number 19 this week, two spots below Journey's Captured, the week's highest debuting album at number 17. While I really wanted to like Captured, it just never clicked with me. I never got to see experience Journey live in their Eighties prime though I would have given just about anything to see them on the Escape Tour when it came to town in November 1981, with Loverboy as the opening act. The setlist for that tour was leaps and bounds beyond what is heard on Captured to this fan. I bought the album solely for the lone studio track "The Party's Over (Hopelessly In Love)" which remains a favorite. I have grown to appreciate the album's live take on "Lovin', Touchin' Squeezin'" as well. Oddly at the time, I noticed that Captured was dedicated to Bon Scott, who they refer to as "a friend from the highway". I could never make the connection between Journey and AC/DC until a few years later when I learned the former had opened for the latter on their If You Want Blood trek in 1978 and 1979. 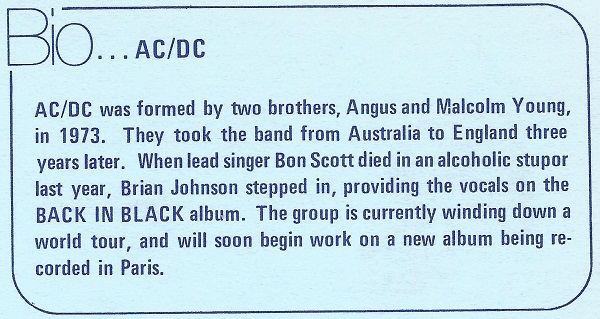 On the back of the WLS Survey dated February 21, 1981, is this brief Bio of AC/DC. Back In Black sat at number 2 on the Thirty-threes chart aided by a pair of singles on the Forty-fives chart: "You Shook Me All Night Long" at number 19 and, coming at number 34, the highest of five debuting singles this week, "Back In Black". The album, along with Def Leppard's On Through The Night (also from 1980), was my introduction to hard rock. Though I might include Pat Benatar's first two albums (In The Heat of The Night and Crimes Of Passion) as well because I heard them all over at Robbie Rottet's house in 1980 as he deftly smuggled them one by one out of his older brother's room so we could listen to them repeatedly. 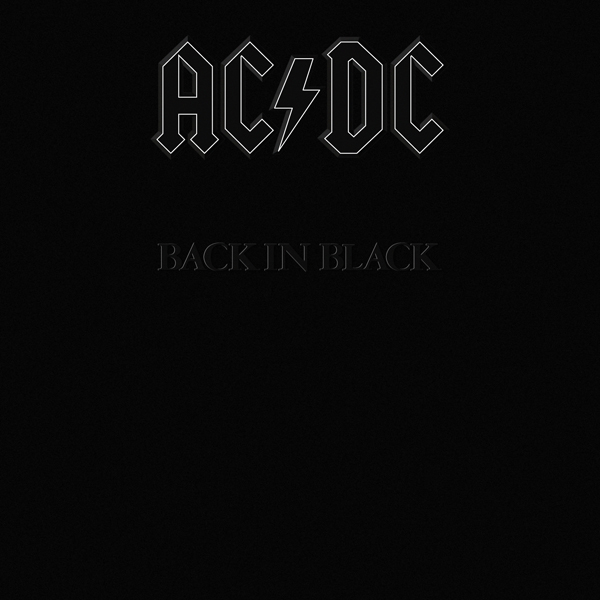 Besides Heart's Greatest Hits/Live, there were two other compilations on the Thirty-threes chart that week, both of which were (and still are) in my collection. 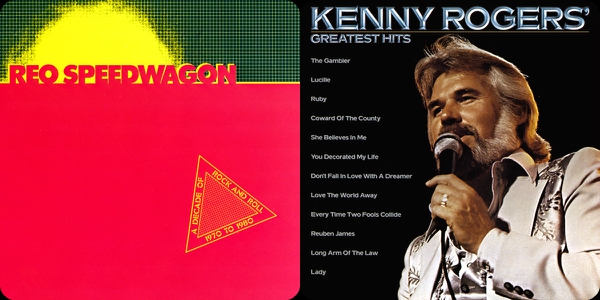 With their huge Number One Album Hi-Infidelity, REO Speedwagon was the biggest band around so it was only natural that all of their newfound fans would want to hear their older stuff. The double album A Decade Of Rock And Roll 1970 To 1980 had been released a mere seven months prior to Hi-Infidelity and fit the bill as both a greatest hits retrospective for the band's long-time loyal fans as well as those fans new to the group's music. I was in the latter group and it was my Texas Grandma who bought me the album on cassette. I remember Dad having Kenny Rogers' Greatest Hits on both eight-track tape and vinyl. Rogers was one of a handful of artists, along with Linda Ronstadt, Neil Diamond, and Fleetwood Mac, whose music was well-liked by both of my parents. It's a great album that topped both the national pop and country album charts. On this week's Thirty-threes chart, the Top 10 was the same as the previous week with two exceptions: Kenny Rogers' Greatest Hits swapped places with Pat Benatar's Crimes Of Passion. 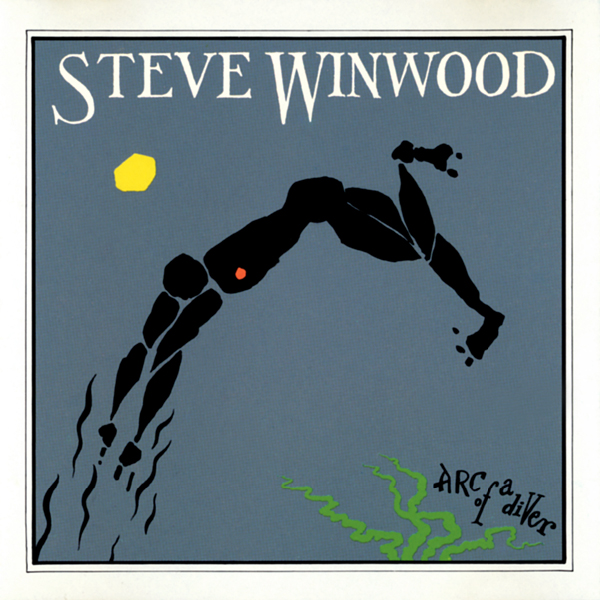 Arc Of A Diver, performed, produced and recorded by Steve Winwood, was the only other debuting album on the Thirty-threes chart this week, splashing in at number 27. It would eventually stick two singles on the Forty-fives chart later in 1981 with the title track and "While You See A Chance", both of which still sound amazingly fresh four decades down the line.