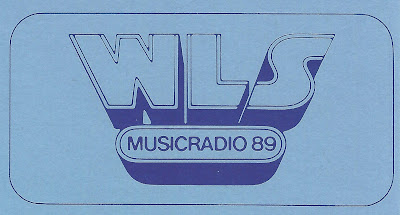 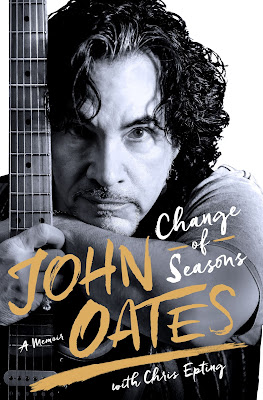 So I'm reading the John Oates memoir and in the third paragraph of his Introduction, he sets the record straight about his creative partnership with Daryl Hall: "We are not a duo" he says before going on to emphatically state "it has never been Hall & Oates" (the italics are his). I can't go for that (no can do) as I've got around 150 songs in my digital library credited to "Hall & Oates" in the Artist field. Sorry, John, I don't mean any disrespect but it has always been Hall & Oates in my little world (those italics are mine). I file the vinyl albums and compact discs the two of you released under the letter H - not for Hall of Famers but for Hall & Oates. And when I talk about attending your concert at the McKale Center in December 1984, I don't say "I saw Daryl Hall & John Oates in concert at the McKale Center on the beautiful University of Arizona campus"; I simply say "I saw Hall & Oates back in 1984 on campus." 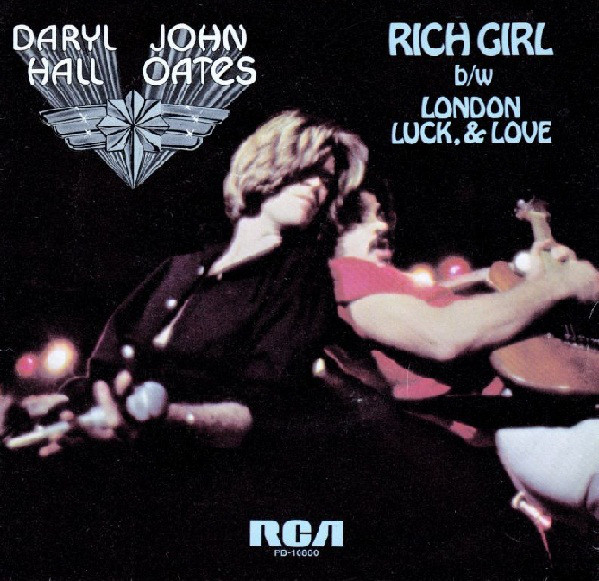 "Rich Girl" was the first Hall & Oates 45 I ever bought and the song still grabs my attention forty years later despite the heap of trouble it got the ten-year-old me into at school though it wasn't the first time nor would it be the last time singing a song in school got me in trouble. I'm fairly certain I bought the 45 around Valentine's Day 1977 and initially planned to give it to the only rich girl I knew, my fifth-grade crush, the lovely Diana B. before keeping it for myself and just thinking about her as I listened to it. The single eventually topped the WLS Forty-fives survey the week of April 16, 1977, having its lyrics printed on the back of the survey and knocking "Dancing Queen" out of the slot after a one week stint. "Rich Girl" reigned for two weeks but by April 30th, Glen Campbell's "Southern Nights" had usurped the top spot and "Rich Girl" took a tumble. We came together today not to examine the April 16th or April 30th surveys but to go in depth with the WLS survey dated April 23, 1977. 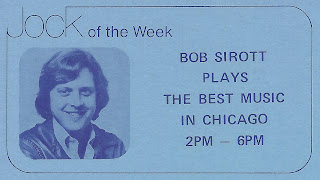 Bob Sirott was the Jock of the Week and I heard him just a few times because of the timing of his shift (2-6), which was inconducive to my listening habits unlike the air shifts of my favorites Larry Lujack (mornings) and John Records Landecker (evenings). After a long career in both radio and TV throughout Chicagoland, Sirott is back at WLS these days, co-hosting a show with his wife. It should be noted that the once mighty Musicradio had switched to all talk radio abruptly on August 23, 1989, after playing this final song.

As usual, the Concerts in the Weeks Ahead was woefully out of date, advertising mostly shows that had already blown through The Windy City. One of the shows not noted on the Concerts calendar is an April 23rd show by an ascending Cheap Trick at B'Ginnings, a Schaumburg club co-owned by Danny Seraphine, drummer for Chicago, who were recording their Chicago XI album at the time.
On music television that week, Van Morrison performed with Carlos Santana and host George Benson on The Midnight Special, which was taped a month before it actually aired. This was the standard practice for nearly all shows, which often aired acts performing their latest singles weeks or even months after they had peaked on the charts. If you spent any time at all in front of the tube back then, you know 1977 was an excellent year for music television. Not only were there shows like The Midnight Special, Don Kirshner's Rock Concert, American Bandstand, Soul Train and Saturday Night Live but there were music-based variety shows like The Sonny & Cher (Comedy Hour) Show, The Captain & Tennille, The Tony Orlando & Dawn Rainbow Happy Hour, The Jacksons, The Marilyn McCoo & Billy Davis, Jr. Show, Donny & Marie, Hee Haw and The Muppet Show. If it was a snow day or a rare sick day, there was a chance a musical act would guest on Dinah! or The Mike Douglas Show. 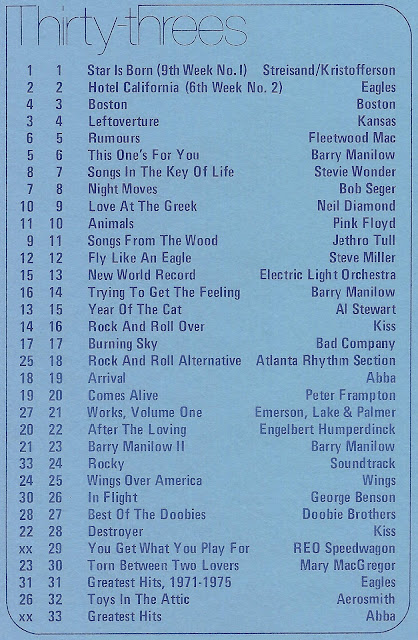 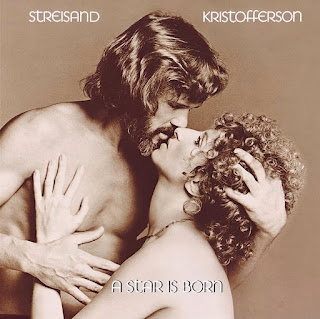 Over on the Thirty-threes chart, the A Star is Born soundtrack was in its ninth week at the top of the chart while runner-up Hotel California held its ground for a sixth consecutive week. (SPOILER ALERT: The two albums would switch places the following week.) Three acts have a pair of albums on the chart this week: ABBA, Eagles and KISS. But with three albums on the chart, Barry Manilow handily bests all comers. 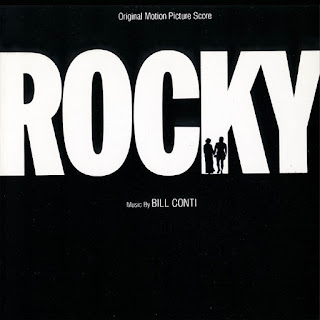 The biggest mover on the Thirty-threes chart is the soundtrack to Rocky, which debuted at the anchor spot last week before jumping nine places up to number 24 this week with the single, "Gonna Fly Now (Theme from ROCKY)" debuting at number 37 on the Forty-fives chart. The lyrics to the number 7 song appear on the reverse of the survey which is sponsored by yummy Zingers, which were but one of my rotating menu of after-school snacks. 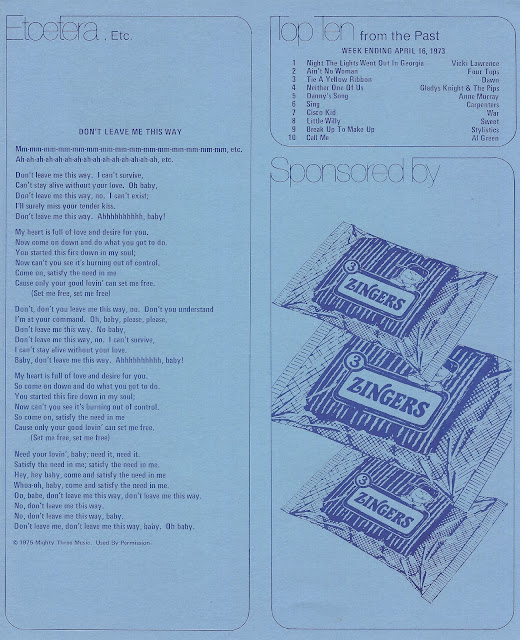 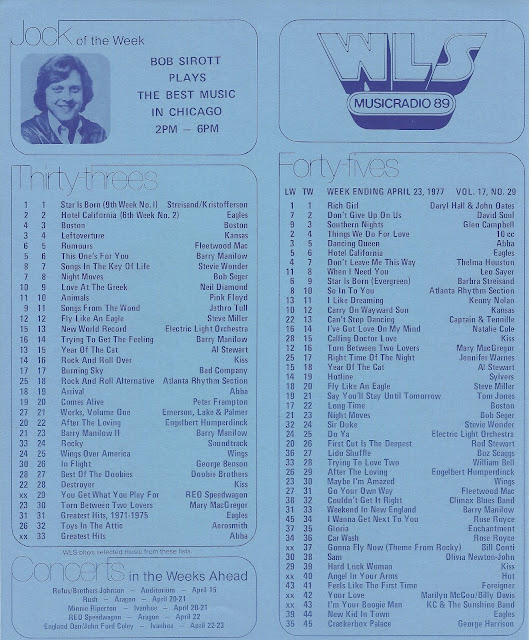 Four songs debuted on the Forty-fives chart that week, including the previously mentioned 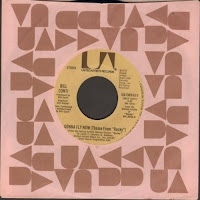 "Gonna Fly Now (Theme from ROCKY)", which was highest chart-crasher at number 37. Hot's "Angel In Your Arms" came in at number 40 while "Your Love", the follow-up to "You Don't Have To Be A Star (To Be In My Show)" limped in at number 42. Edging the other three debut singles out for the cash & prizes that accompany the awarding of My Favorite Debut of the Week were KC & The Sunshine Band and their can't-sit-still hit "I'm Your Boogie Man", sliding in at number 43. 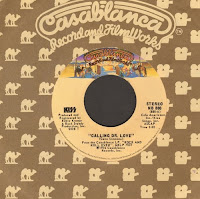 The biggest mover on the Forty-fives chart that week was "Calling Dr. Love". It jumped thirteen places, from 28 to 15, while KISS's other single on the survey "Hard Luck Woman" dropped from 29 to 39. Other acts with a pair of songs on the Forty-fives chart were the Eagles with two singles from Hotel California  and Rose Royce with two singles from the Car Wash soundtrack .
Comparing WLS's Forty-fives chart to other national and international singles charts that week yields no unanimous, worldwide Number One Song as the four other charts each had their own chart-toppers and none of them were also titled "Rich Girl"; the song had already topped both Billboard's Hot 100 and Cash Box's Top 100 on March 26. As we've come to expect, the Canadian RPM chart comes closest to WLS's by sharing 36 of the latter's 45 singles with Cash Box and Billboard matching fewer as they were slightly ahead of the curve (or rather WLS was slightly behind the curve) and many of WLS's charting singles had already run their course on their respective charts.

The chart above matches WLS Forty-fives up against other stations' weekly surveys across the country and Canada, both FM and AM, including WHYI in Ft. Lauderdale, FL; WPGC in Washington, DC; CHUM in Toronto, ON; WIBG in Philadelphia, PA; and KOLA in San Bernadino, CA. Once again, there is no agreement - we were all at the mercy of our favorite station's music directors and, to a lesser degree, the favorite songs of our fellow listeners. Down in Florida, the home team of KC & the Sunshine Band was already at Number One though they were just debuting on WLS's chart while in DC and way over in San Bernadino, coast to coast one might say, Leo Sayer's ballad "When I Need You" was sitting on top of their respective charts. That's all I got for now. Let's meet up again soon to examine the Memorial Day weekend WLS survey of June 4, 1977.

For a closer look at the Billboard's Top 40 for the week of April 23, 1977, head on over to the soft rock kid's detailed rundown of that week's episode of Casey Kasem's American Top 40.