First off, like all posts here on The Hideaway, this one is not a paid endorsement. I remain fully independent, completely ad-free and wholly biased - I only write about things I like. For the last year or so, milady and I have been driving across town to one of our new favorite dining spots with quite some frequency. 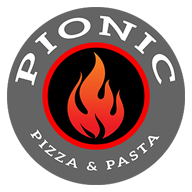 It's a local place called Pionic which rhymes with "bionic" so you can see my initial attraction. They serve pizza, pasta, and salads - fast. It literally takes no more than 5 minutes from the time you custom build your pizza or pasta before you are blowing on it to cool it down so you can take your first bite. (Salads, I assume, are ready to eat as soon as you pay for them.) She likes pasta, I like pizza and we both love Pionic.

We tried a similar place, The Pizza Studio, that was closer to our house but it just wasn't that good and closed mere months after it opened. Then a month or so ago, we tried a new place recommended by two trusted friends. It is relatively close to our house, centrally located close to shopping and movie theaters so we pass by it frequently and one afternoon we pulled in for a meal somewhere between lunch and dinner, that dead zone which my wife refers to as linner and I call a late lunch cause I'm still gonna eat supper. 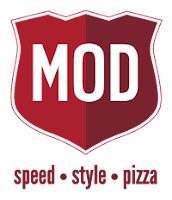 Anyway, we were at MOD Pizza, which had opened up just a few months earlier while we were busy with other things. Whatever song was playing when we walked in got my head bobbing immediately. The guy behind the glass wall explained the M(ade) O(n) D(emand) Way and I customized a Caspian while simultaneously listening to the next song that came on over the PA system which was at a near-perfect volume for my dining experience; louder but still a couple of notches below the level of a packed dance floor or a Five Guys. We paid, filled our cups with soda and sat down while a third song came on and I noted it while forgetting the first two songs I had just heard. 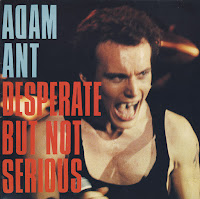 That first noted song was Adam Ant's "Desperate But Not Serious" which never gets any airplay because everybody knows Adam only recorded one song and it was called "Goody Two Shoes" but I digress. Our pizzas were ready and as I got up to get them, "Rockaway Beach" by Ramones began to play. As we ate and chatted, enjoying our pizzas thoroughly (you got no one else to blame when you watch them build it to your specifications), I kept track of the songs playing, waiting for a station break or announcement or anything that would help me identify what exactly we were listening to. As my song list grew, we finished up and I grabbed a refill of Dr. Pepper before asking the guy behind the counter what we were listening to and he cheerfully replied "MOD Radio; it's our custom station and you can listen online" and then he asked if I liked it and my wife piped up and said "Oh, he likes it" because if anyone in the whole wide universe knows what I like, it's my best friend from the past 33 years. We get home and I realize I left my list of songs on the table or threw it away when I cleaned off our table. (The two song titles above are mentioned only because those are the two I remembered.) 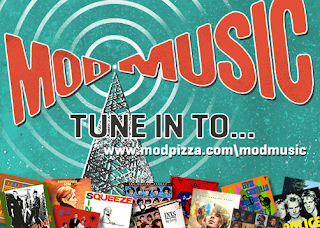 No biggie. Lemme just bring up the MOD website and stream more of the goodness I had heard. The album covers give up the jig, providing a perfect glimpse of the kind of music I had heard: Cream, The Clash, Bowie, The B-52's, Squeeze, INXS, Rolling Stones, The Cure, Beck, Elvis Costello, The Who, The Police and the Beatles. A decidedly British bent sure but also some reggae other than Bob Marley, some old & new ska as well as more than a few American bands from the past five decades of rock'n'roll - a very potent, very MOD mix. But I ran into a problem - Chrome wouldn't stream the station, created and hosted by Custom Channels.

After futzing about with my browser's settings and configuration, I brought up Firefox, clicked on the Play/Mute button that appeared beneath the Mott The Hoople album cover and let the music play for three or four hours that first night, up until I had my supper. There are a couple of little problems with the online player:
1) The display for the Now Playing widget is busted - it continually displays the image, artist, and song title as seen above regardless of which song is playing. It took a few days of listening but eventually "One Of The Boys" was heard.

2) Because the Now Playing widget is busted, the Playlist display is stuck in time, currently reading two years ago and listing twenty tracks, ten of which can be seen on the right. Other than those two things and my initial no go, listening has been a hassle-free experience; I'm even able to stream it on the iPad for when I'm on the porch or in the pool. I've listened off and on for the entire month of August now, at all different times of day, all the while curating a Spotify playlist of the songs I have heard, ignoring repeats, and using the trusty SoundHound app to identify the tracks I didn't know. As I type this, I am streaming MOD Pizza Radio and getting hungry. The music streams 24/7 with no commercials, no DJs, nothing but music. If I stopped monitoring right now, the playlist below would have 215 songs and take nearly thirteen hours to listen to. But I ain't stoppin', no sir. I'm not gonna stop til I get enough. In a 2013 post on the MOD Pizza blog, it was mentioned that there were more than 1,000 songs on the MOD playlist so I still have some work to do. If you like what you hear, keep checking back as I'll keep adding new tracks as I hear them.

In an in-house piece about MOD Pizza on the Custom Channels site, they say the Seattle-based chain has "a young, retro and slightly irreverent attitude inspired by early-1960s English youth subculture known as the “mods”. The mod lifestyle, reaching a peak in 1964, was centered around fashion and music." When asked to give five songs that best describe the MOD Pizza Attitude, Director of Operations Chris Schultz offered up these six:


Do you love the soundtracks to the films Rushmore or Pirate Radio? (I'm a big fan.) Then you might like MOD Radio. Do you dig No Thanks! The 70s Punk Rebellion or the 1-2-3-4 Punk & New Wave 1976-1979 box sets? You'll probably enjoy MOD Radio.
Are you a fan of:
The Kinks?
Yardbirds?
The English Beat?
The Jam?
Pretenders?
Small Faces?
Joy Division?
Blondie?
Talking Heads?
The Smiths?
Then you probably will enjoy MOD Radio. It's British-centric but packs enough variety and surprises to maintain your interest.