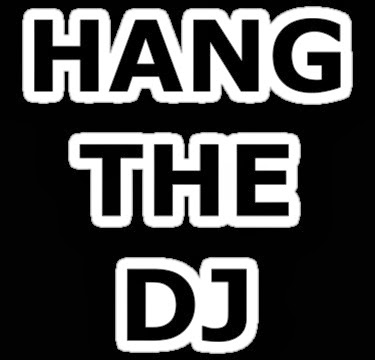 The one with Rhino picking up where
Just Can't Get Enough: New Wave Hits Of The '80s
left off...

Sort of.  After issuing 15 numbered volumes covering New Wave music from 1979-1985, Rhino ended their Just Can't Get Enough: New Wave Hits of The '80s series in 1995 but then went on to issue four additional, themed volumes between 1996 and 1998: Women, Dance Hits, Halloween and Xmas.  In September 1996, Rhino released the first three volumes of their next series, which they dubbed Hang The DJ: Modern Rock.  Each of the first three discs covers a specific year (1986, 1987 or 1988) over the course of 18 songs, seemingly picking up right where the previous series had left off.  (The new series also followed Rhino's initial coverage of alternative rock with their two volume Never Mind The Mainstream: The Best Of 120 Minutes in 1991.) 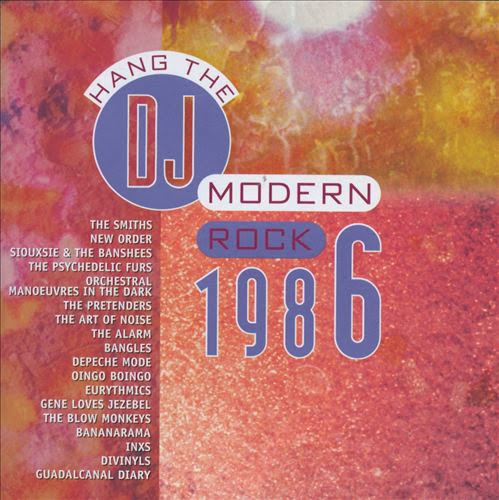 "1986 is definitely the most consistently accessible of the three discs; nearly every song on the collection is still played today at radio stations "Flashback" shows, and would be the best present for the modern-rock fan." - Bob Gajarsky

The music on these discs is either too pop/crossover for college radio elitists or just about right for fans who grew up listening to modern rock's immediate genre predecessor, new wave.  HERC is more the latter and these songs fit the bill nicely although if HERC had any say in the compilation, he would have skipped the Bananaramajamma and chosen a different Depeche Mode song.  Also, the choice of the re-recorded "Pretty In Pink" is debatable.  The final song on the disc is still as funny as the first time he heard it but his favorite songs on 1986 are:


"Panic" - The Smiths
Track 01 kicks the disc off in style as it lends the series its moniker with the unsettling refrain that closes out the song:

"If You Leave" - Orchestral Manoeuvres In The Dark
Like the previous song but dialed back a couple of notches.  Softer around the edges and sweeter to boot.

"Missionary Man" - Eurythmics
Annie and Dave brought a blues rock edge to their synth-pop with this harmonica driven ode to badassery. Always reminds HERC of Sting's "Demolition Man" as covered by Manfred Mann's Earth Band in 1982.

"Digging Your Scene" - The Blow Monkeys
Like this song a lot but HERC's favorite memory of this song was hearing Casey Kasem say the band's name during its Top 40 run, when it made it all the way up to #14.  You could almost hear Casey snickering sometimes while at other times it sounded like he was just about to go off on one of his legendary temperamental rants.

"What You Need" - INXS
HERC used to drive around in his '64 Green VW Bug (license plate read 2COO4U) blasting this song - actually, the entire Listen Like Thieves album - in what would turn out to be his final days of bachelorhood. 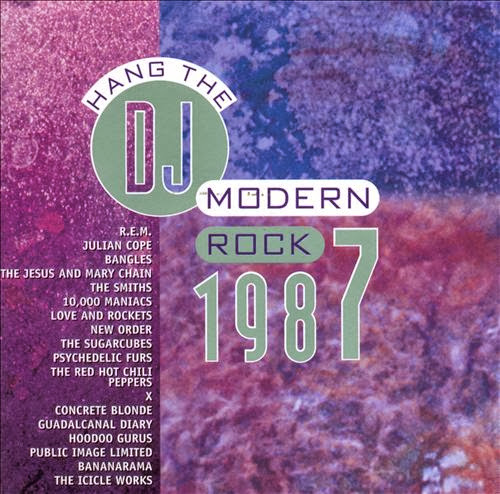 1987 was the year HERC got married and had his first child. His music collection suffered for the good of his new family with less discretionary income and a lack of insurance that forced him to sell the majority of his albums and CDs to pay for his daughter's extra week long hospital stay after her birth.  It was all worth it as his daughter is healthy and happy, his marriage is still loving and strong and his music collection bounced back rather nicely too although he replaced most of his sold vinyl with their CD counterparts. 1987 was also the year HERC got more and more into the sounds of house music, hip-hop and metal, drifting away from his usual pop/rock ways.  Still, these are his favorite tracks on the 1987 disc:

"World Shut Your Mouth" - Julian Cope
Previously commented on here: "A punky rocker in the vein of The Jam or Elvis Costello that makes for good driving music. Don't make HERC's mistake and sing Girl instead of World."

"Hazy Shade Of Winter" - The Bangles
Who knew a Paul Simon song could rock so hard?  The Bangles, that's who.  They teamed up with Rick Rubin to record the song for the soundtrack to Less Than Zero and made it all the way to the penultimate spot on the charts - Simon's original stalled at #13 nearly twenty years prior.

"No New Tale To Tell" - Love And Rockets
This band featured 3/4 of the band Bauhaus and it took them a couple of albums to find their sound.  HERC hopped on board the "Kundalini Express" in 1986 and was delighted to discover the boys' rockin' "Ball Of Confusion" update.  Two years after "No New Tale To Tell" they scored their biggest hit, the Modern Rock chart topper "So Alive".

"True Faith" - New Order
A slightly different mix of this one showed up on the soundtrack to 1988's Bright Lights, Big City.  HERC's favorite mix of this track is Shep Pettibone's Morning Sun Extended Mix which runs about nine blissful minutes.

"Heartbreak Beat" - The Psychedelic Furs
Singer Richard Butler's voice is not every one's cup of tea but it has always been kind to HERC's ears.  His other band - Love Spit Love - recorded a cover of "How Soon Is Now" by The Smiths for the soundtrack of The Craft - it was also used as the theme song to the similarly themed television series Charmed and frequently shows up on HERC's Halloween mixes.

"Fight Like A Brave" - Red Hot Chili Peppers
Although this song shares similar subject matter with their hit "Under The Bridge", most people don't realize it - musically, this is an aggressive, upbeat party starter rather than a mellow contemplation and confession.  Though they've never offered a reason why, the band hasn't performed this song in more than twenty-three years. 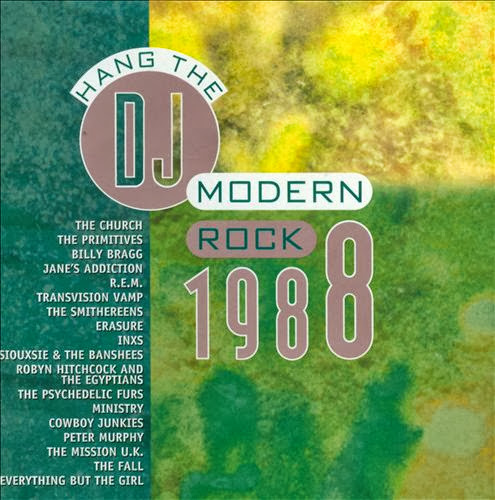 To which HERC replies: "Umm, no."  Well that's not true. The songs are probably a good sampling of the popular alternative rock favorites of 1988 but this CD has the fewest HERC favorites of the three discs.  Your mileage may very.

"Under The Milky Way" - The Church
Previously commented on here: "Has a dreamy, nighttime quality to it, both musically and vocally, that relaxes HERC almost instantly."  Also goes well with "So Alive".

"Orange Crush" - R.E.M.
Previously appeared here.  HERC didn't really offer up any sort of opinion on it then so here's what he thinks of the song: It is a powerful commentary on the military industrial complex and its systematic destruction of many of our nation's best and brightest young adults.  Listen to the lyrics people - don't just get caught up in the catchy music.

"Only A Memory" - The Smithereens
In a fair and just world, The Smthereens would have had a track on all three volumes of Hang The DJ.  Their music is thoroughly modern while at the same acknowledging the British Invasion of the Sixties.  HERC's suspicions were confirmed when they later released two albums of Beatles covers and a tribute to The Who's Tommy.

"Chains Of Love" - Erasure
Andy Bell has another one of those love it or hate it voices and once again, HERC is on the "love it" side.  Paired with Vince Clarke, the two have been making deliriously poppy tunes since 1986 and could have been featured on all three of the discs in this series.  HERC's favorite version of this song was on Sire's Just Say Yo!, Volume 2 of their sampler series: the Truly In Love With The Marks Bros. Mix.

"Need You Tonight" - INXS
Such a good song - sounds as fresh today as it did a quarter of a century ago!  Starts  off suspiciously like another mechanical Fine Young Cannibals track until Michael Hutchence's voice comes whis-purring in and then you realize the Cannibals could never groove like this. Still sounds incomplete to HERC if it doesn't smoothly and seamlessly segue right into "Mediate".

And there you have it: Rhino's second, equally brief foray into the wonderful and musically diverse world of modern rock/college rock/alternative rock.  If you're like HERC, your mind is already pumping out additional volumes covering the years 1989-1991 and even doubling back, planning alternative discs for the years 1986-1988.  Those playlists will be coming soon to The Hideaway.  As will Rhino's third stab at anthologizing the post-New Wave sounds mostly heard on the left side of the dial.