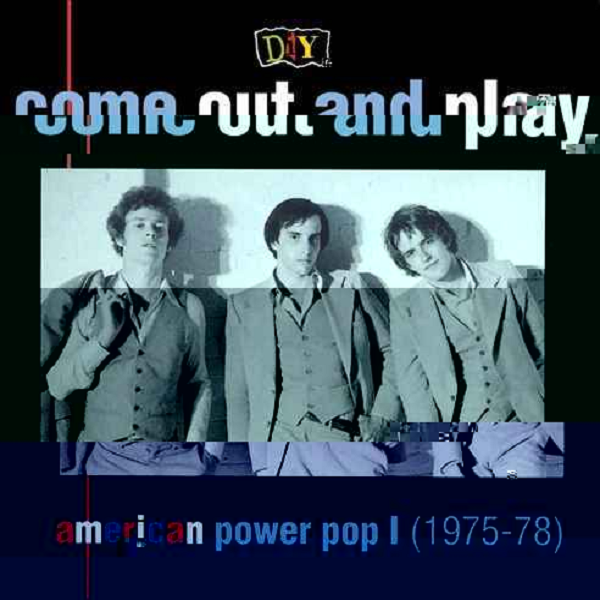 As is the case with so much of the music that I enjoy, so much of the music that has soundtracked my existence here on Earth, it was Dad who introduced me to what later came to be known as power pop. Specifically and inadvertently through his vinyl copy of the Buddy Holly double-disc compilation titled A Rock & Roll Collection from 1972, which I spent quite a bit of time sneaking onto his turntable and listening through his Panasonic headphones when he was at work. 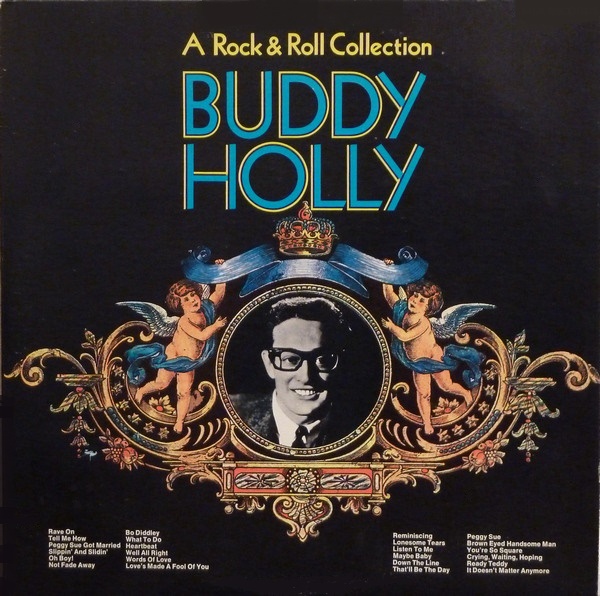 Lurking within those blue-black grooves were such pre-historic power pop gems as "Rave On", "Oh Boy", "Maybe Baby", "That'll Be The Day" and "Peggy Sue", all of which competed on a daily basis in a battle royale to be my favorite song until I fell ears-first into the wacky world of novelty songs - the first 45 I ever purchased was 1974's "The Streak". My brief passion for silly songs morphed into a hard-core, long term infatuation with Top 40 music (via the killer combination of listening to Casey Kasem's American Top 40 every week, summers spent feeding quarters to the Cow Talk Jukebox with its unique selection of current Top 40 & Country 45s and my ear glued to WLS the rest of the year) which featured the "transcendent teen anthems" of power pop every so often. Though I was but a pre-teen, the unbridled energy and sing-along harmonies of the music appealed to me even though I didn't know it was power pop. (And it still appeals to me even now that I am a grizzled grandfather forty-something years later.) Your own road to power pop adoration most likely took a different path but here we are today, giving a listen to the seventh disc in Rhino's tasty DIY Series, Come Out And Play - American Power Pop I 1975-78. 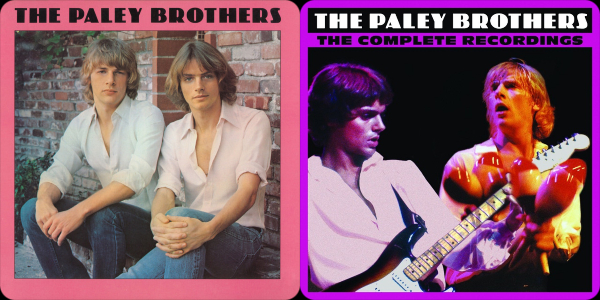 The album takes its title from "Come Out And Play", a really, really cool song The Hollies The Paley Brothers recorded in 1976, with an up and coming Jimmy Iovine producing. Andy and Jonathan Paley appeared in the big crowd scene finale of Sgt. Pepper's Lonely Hearts Club Band as well recording a track with a Joey-less Ramones for the soundtrack to Rock 'N' Roll High School. Then, after a couple of arduous recording sessions with Phil Spector in 1978, the duo split and we had to wait until the release of The Complete Recordings some thirty-five years after their (only) self-titled album to get our ears on even more Paley Brothers material. Don't sleep on either album (pictured above) - pick 'em up if you find them, you won't regret it. 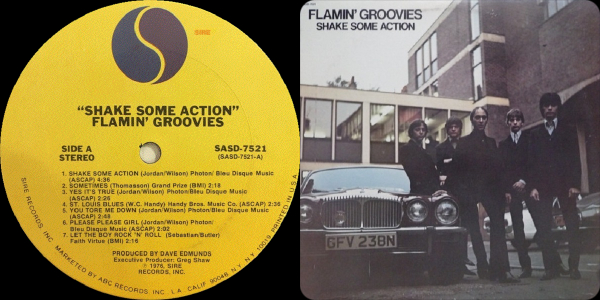 The first track on Come Out And Play also lends its title to a label and an entire series of compact discs, which we'll get to in a bit. That track, the legendary "Shake Some Action", produced by Dave Edmunds, is considered by some devotees of power pop as the ultimate song in the genre. Originally recorded in 1972 and then re-recorded in 1973 before the 1972 original recording finally garnered a release in 1976 to critical acclaim and led to a tour of the UK that same year that saw Sire label mates the Ramones opening for them on two dates, including America's own Bicentennial, July 4, 1976. "Shake Some Action" is packed with the ringing harmonies, catchy riffs and yearning lyrics that define power pop music and there's more where that came from on the group's own Shake Some Action album. 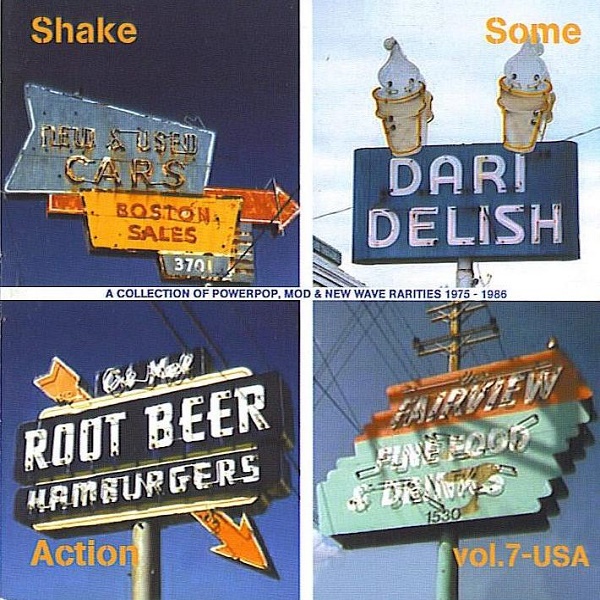 As for the Shake Some Action label and their 8 compact discs and 2 vinyl releases, each volume is subtitled A Collection of Powerpop, Mod and New Wave Rarities 1975-1986 and devoted to either the UK (Vol. 1), USA (Vols. 2, 4 and 7), UK & Ireland (Vols. 3, 5 and 8) or All Around The World (Vol. 6). (The vinyl albums mirror Vols. 1 and 2 and are labeled Vols. 1.1 and 2.1. and contain 50% of the tracks of their digital counterparts.) Liner notes are taken from Alan Fleagle's hard-to-find books on powerpop (sic) and the track selection goes deep. If you're curious, as of this writing, all 8 CD volumes can be listened to on YouTube.

The Nerves, the trio who appear on the cover of today's featured volume in Rhino's DIY series, have both of the songs from the A-side of their 1976 self-released EP on Come Out And Play. The first track from that record - the Jack Lee penned "Hanging On The Telephone" - may sound familiar as it was later covered by Blondie as the opening track on (and third single released from) their Parallel Lines album in 1978. Lee would taste Top 40 success when Paul Young covered his song "Come Back And Stay" in 1983. Nerve member Peter Case later recorded "When You Find Out", the second track from the group's EP and released it as the B-side of a 1981 single from his later band. Maybe you've heard of them? They were The Plimsouls. Paul Collins, the third member of The Nerves, joined Case in the short-lived Breakaways and, after that band's quick demise, he formed The Beat (not to be confused with the UK ska band of the same name who were known as The English Beat in North America). The seminal influence of The Nerves, both collectively in their brief time together and as individual artists after the band's break-up, still reverberates through the power pop scene to this day. Booking, financing and promoting their own tours (with Collins as their manager) while also issuing the EP on their own label is the epitome of the DIY Scene.

While I immensely enjoy the Paley Brothers, Flamin' Groovies, and Nerves tracks as well as a few others on Come Out And Play, my current favorite track on the album has got to be "Where Have You Been All My Life" by Fotomaker. It's a little more soft pop than power and admittedly the group is made up of power pop ringers from the Rascals and Raspberries but man oh man there are hooks and riffs and sweet sweet harmonies that continue to haunt me days after listening. The track only made it to #81 on the Hot 100 in a six-week run spanning April and May 1978. 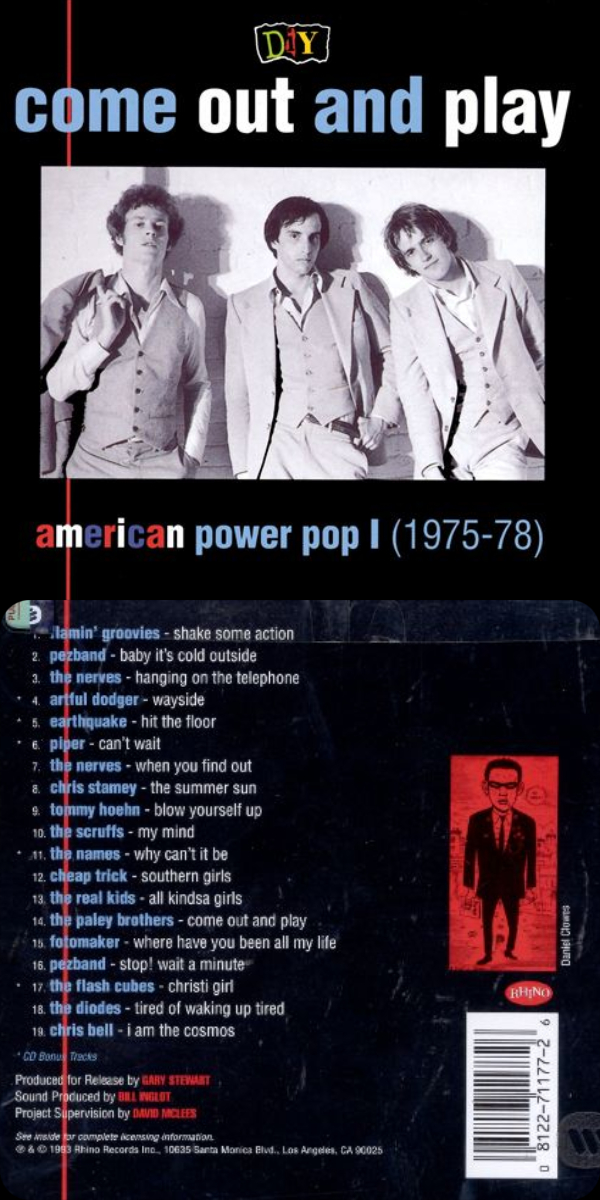 Only one disc left in Rhino's DIY Series!