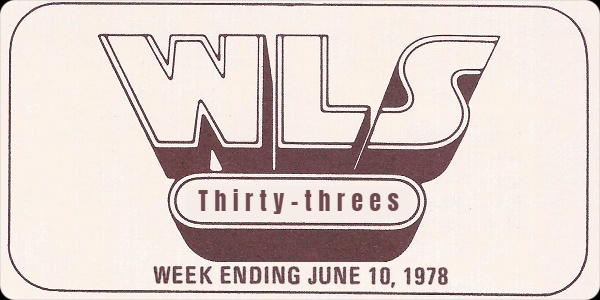 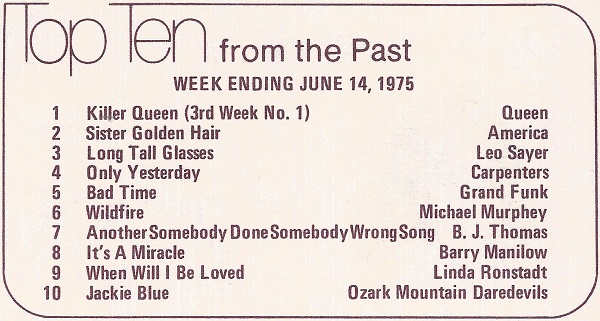 In lieu of a Bio on the back of this week's survey, there's a Top Ten from the Past that jumps back three years to June 14, 1975. At the top of the chart is Queen's "Killer Queen" in its third and final week at the summit. The track had peaked at number 12 on Billboard's Hot 100 a month prior and on the chart dated June 14, 1975, the track spent its very last week on the Hot 100 at number 64 before vanishing without a trace. The rest of WLS's Top 10 is pretty solid even if, as usual for the station, only three of the tracks are in the Top 10 of Billboard's national singles chart that week. 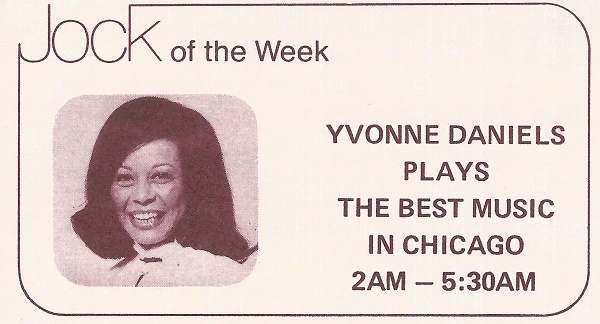 Yvonne Daniels remains a mystery to me though she deserves better. Her brief overnight shift precluded her from my regular listening, even as a 12-year-old on Summer vacation, but I have read nothing but wonderful things about her, not the least of which was her induction into the National Radio Hall of Fame in 1995. 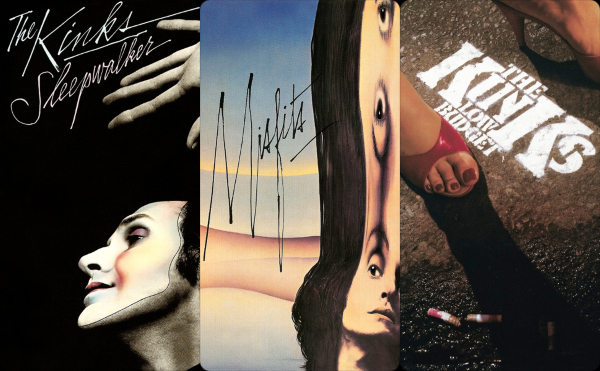 Touring behind their recently released Misfits album and a deep, eclectic back catalog, The Kinks had entered their so-called "arena rock" phase with 1977's Sleepwalker and Misfits was built upon leftover songs written and recorded for Sleepwalker but both albums set the stage for the band's highest charting album, 1979's Low Budget. 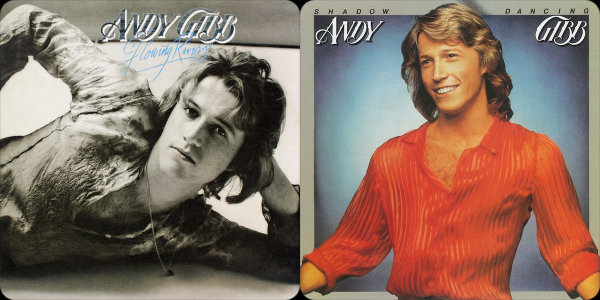 Andy Gibb, barely twenty years old with unlimited potential and already battling demons that would eventually cost him everything, was on the road behind his second album Shadow Dancing and the massive title hit, which *SPOILER ALERT* was perched atop this week's Forty-fives chart for the first of its six-week reign. The album's next two singles would both peak at number 11 on the station's list of Forty-fives.

Lyrics were devoted to last week's Number One Song on the Forty-fives chart, a track from this week's number 20 album on the Thirty-threes chart, Johnny Mathis's You Light Up My Life. In addition to Mathis's take on the title track, he offers up his cover of another huge hit from 1977, the Bee Gees' "How Deep Is Your Love" while also covering "Emotion" as another duet with Deniece Williams, even as the Samantha Sang original was currently on the list of Forty-fives at number 16. 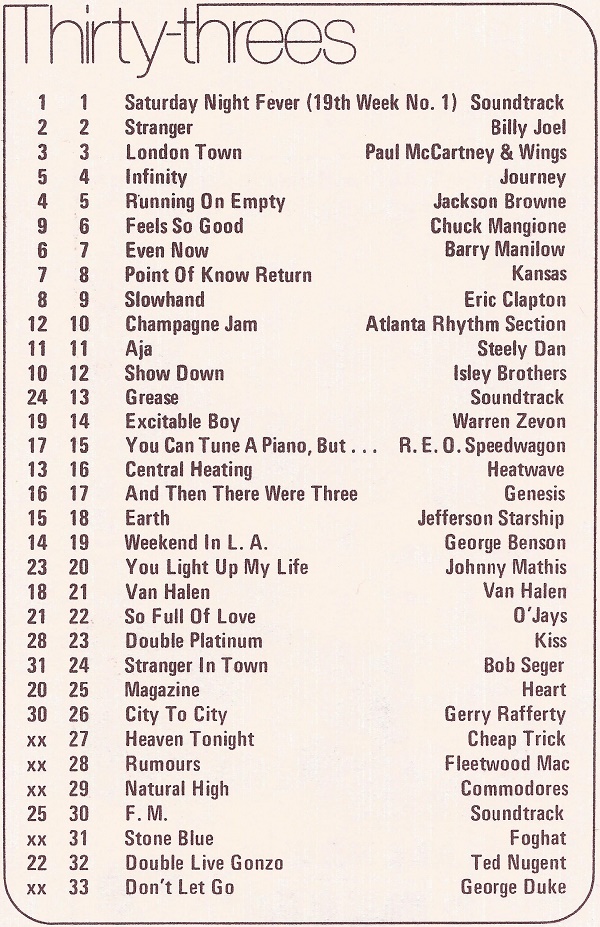 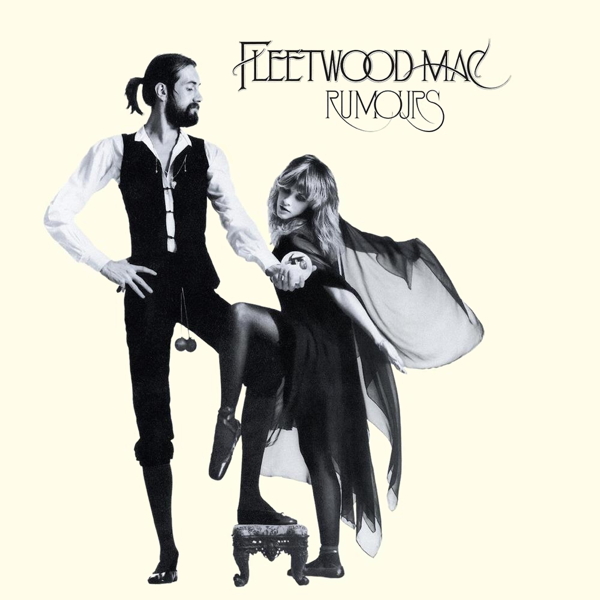 There are five debuts on the list of Thirty-threes for the week of June 10, 1978. Four of those albums are new to the chart but the one pictured above is a former Number One Album, returning to the chart for a victory lap after just one week away. Its stay would prove just as temporary as it's return - Rumours would not be on the following week's chart. 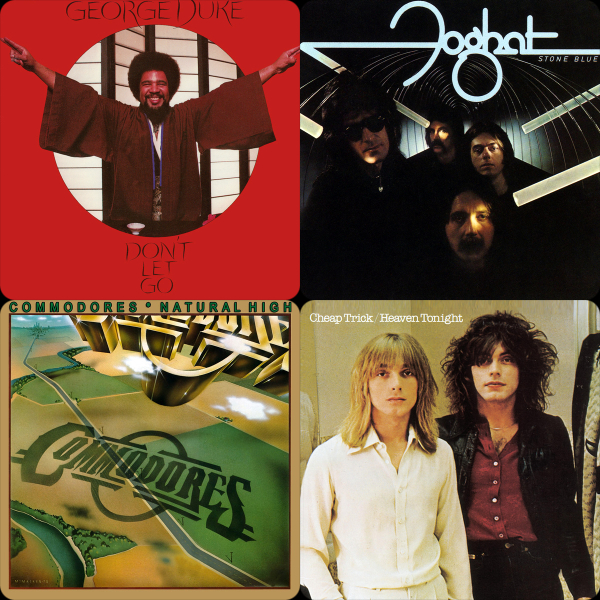 Of the remaining debut albums, only George Duke's Don't Let Go down at the anchor position of the station's list of albums was supported by a single concurrently on the Forty-fives chart, with "Dukey Stick" rising up to number 24 this week. At number 31 on the Thirty-threes, was Chicagoland favorite Foghat, whose title track from Stone Blue may have gotten some airplay but failed to make the station's list of most played singles. Natural High from the Commodores came in at number 29 though it would be more than a month before a single from the album debuted on the Forty-fives. It would be nearly three months after Cheap Trick's Heaven Tonight debuted at number 27 before the album's lead single "Surrender" appeared on the Forty-fives chart the week of August 26, 1978, just as the album was slipping out of the Top 10. 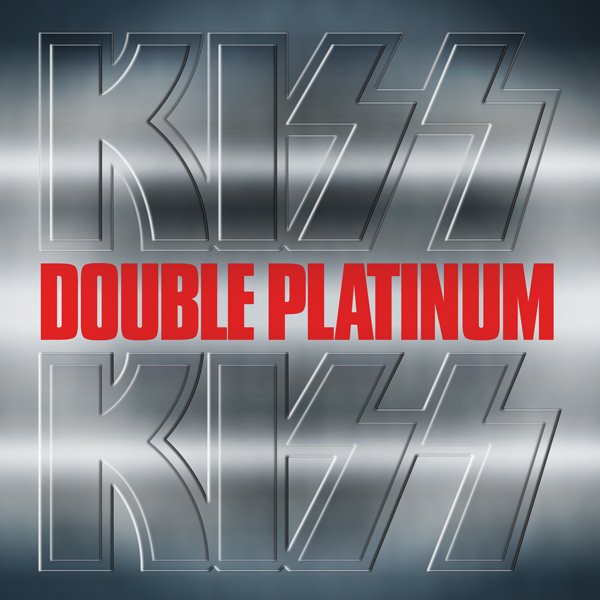 KISS's Double Platinum is the lone greatest hits album on the Thirty-threes chart this week, moving up five spots to number 23. Not being allowed to have any KISS records, I wanted it so bad. Finally got the album a few years later and it was one of the most disappointing music-related experiences I have ever had.

There are three soundtrack double-albums on the Thirty-threes chart dated June 10, 1978, including the Number One Album - for the 19th week in a row - Saturday Night Fever, with three singles in the Top 20 of the list of Forty-fives. Grease is the chart's biggest mover, jumping 12 spots to number 13 for the week. And finally, there's the excellent F.M. (sic) soundtrack album down at number 30. 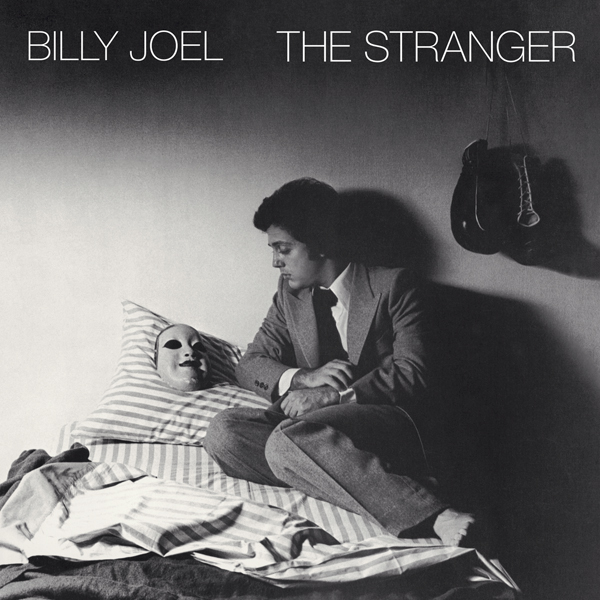 My pick of this week's Thirty-threes is Billy Joel's masterpiece, The Stranger. The other day, Mrs. HERC and I were listening to music and Joel's "Movin' Out (Anthony's Song)", (track one, side one) of The Stranger came on. We both sang along. Then the album's title track came on and we both sang along. "Just The Way You Are", "Scenes From An Italian Restaurant","Vienna", "Only The Good Die Young" played one after another and we continued to sing along, both of us having risen from our respective chairs and now getting things done around the house. As "Only The Good Die Young" faded out, my Catholic girl turned to me and asked if we were listening to Billy Joel's Greatest Hits. And, as the piano began on "She's Always A Woman" (track three, side two), I answered, "No, it's just The Stranger", even as I deleted the next two songs from the playlist because, for me, the album is a mere seven tracks and thirty-one minutes of near-perfection. 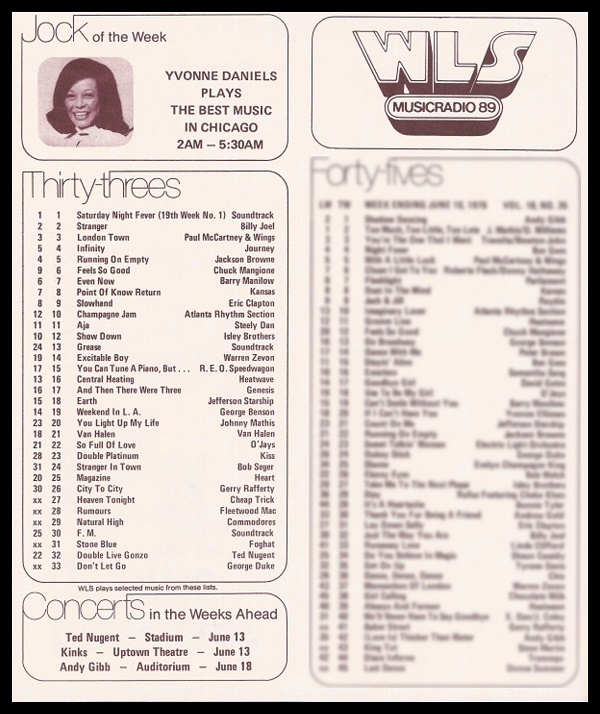