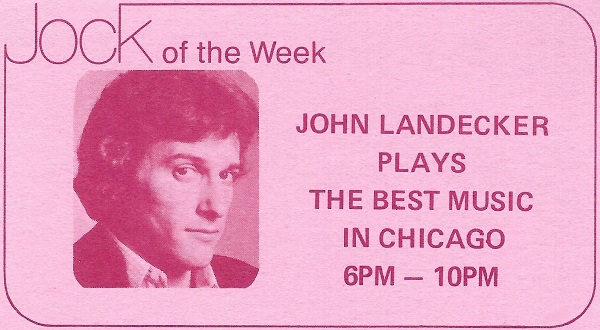 Records really is his middle name. Len O'Kelly, fellow WLS fan and a friend of The Hideaway, calls John Landecker an inspiration, a mentor, and a friend. (Check out Len's blog and Twitter feed for more on John Landecker.) For years, I knew John Records Landecker as the quick-thinking Boogie Check guy. On the survey dated April 28, 1979, it was his turn to be Jock of The Week again.

If I had the means, I would have loved to attend shows by the three artists listed on the brief listing of Concerts In The Weeks Ahead. 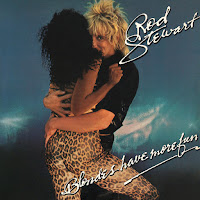 Dad had purchased each of Rod Stewart's last three albums (A Night On The Town, Footloose & Fancy Free and Blondes Have More Fun) on eight-track and listened to them often so they are imprinted on my brain because if he was listening to them, we were all listening to them. I knew Rod had gone disco and was touring behind the Blondes album and it's super-smash hit, "Da Ya Think I'm Sexy" but I just didn't and still don't care. I like it. If Rod had started the American Standards phase of his career at that point in the late Seventies, I doubt neither Dad nor I would have been listening to him. Except to relive past glories like Every Picture Tells A Story. 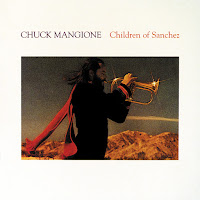 To his credit, and again, I do not know if it was intentional or not, Dad received Chuck Mangione's double-album Children Of Sanchez from one of the record clubs he belonged to and I remember him playing it once, all the way through one Saturday or Sunday, and then putting it back on the shelf. The title track is the only album cut I recall and it remains a favorite today for casual listening as well as testing the limits of audio systems, portable speakers, and headphones. Mangione had a huge hit with "Feels So Good" in 1978 as well as a decent back catalog but I can only imagine that the title track from Children of Sanchez was massive in concert. Reportedly, the setlist at the Chicago Auditorium was nearly identical to his 1978 live album, An Evening Of Magic, Live At The Hollywood Bowl. 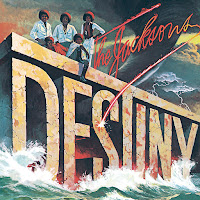 Surprisingly, The Jacksons shows look to be the most disappointing based solely on the setlists I've seen. As the brothers became men, they outgrew their early hits, relegating them to a single medley within their shows. And without any substantial hits since leaving Motown, the rest of the setlist was rather boring. Michael, fresh from his success in The Wiz, was distracted with the ongoing sessions for his Off The Wall album during the tour but left to their own devices for the first time ever with their Destiny album, the brothers Jackson showed what they were capable of, though it took them some time to figure out how to incorporate the irresistible slink of "Shake Your Body (Down To The Ground)" into their live show. 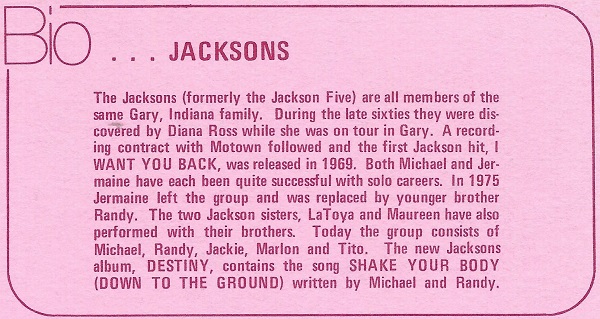 The Jacksons nabbed the Bio on the back of the survey as well. Interesting to note baby sister Janet isn't even mentioned though she had appeared on the family's television show in 1976-1977.

Etcetera, Etc. is devoted to the lyrics of Chic's "I Want Your Love", my favorite song on C'est Chic, the number 32 album from the Thirty-threes list. "I Want Your Love" was at number 14 on the Forty-fives list and contains one of my three favorite Nile Rodgers solos; the others are found in Sister Sledge's "Lost In Music" and Norma Jean's "I Like Love". 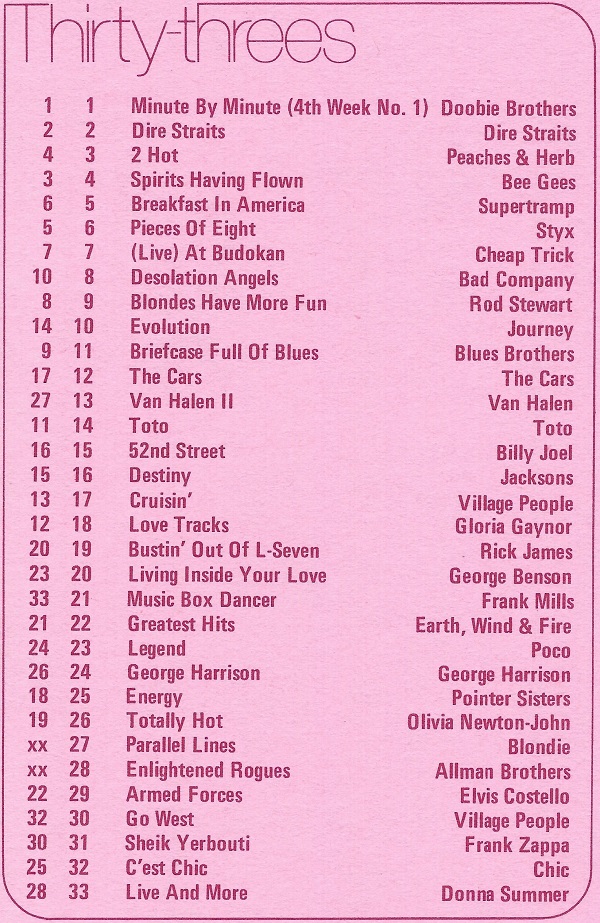 Only one group has two albums on the Thirty-threes list, sittin' pretty at numbers 30 and 17 with Go West and Cruisin' respectively, its the Village People! 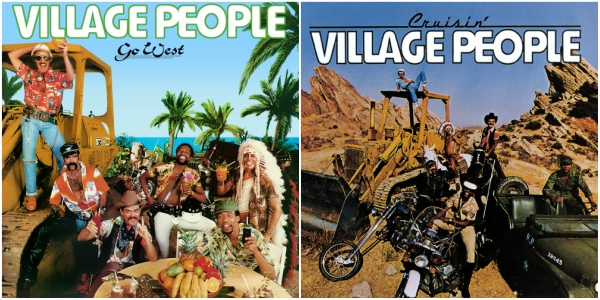 As Dad never did shy away from disco beats, he had both of these albums and Macho Man on 8-track and their four-track self-titled album on vinyl. Disco Demolition Night was still nearly three months away but having two disco albums on the survey of one of the city's top-rated, most listened to stations tells you all you need to know about the musical tastes of a large chunk of Chicago's music fans.

Three self-titled debut LPs also appeared on the Thirty-threes list for the week ending April 28, 1979, with two of the groups inducted into the Rock Hall Of Fame in 2018. At number 14, Toto yielded three singles including the all-but-forgotten "I'll Supply The Love", the Boz Scaggs soundalike "Georgy Porgy" and the rockin' ultimatum of "Hold The Line". Up five to number 12, The Cars also yielded three well-known singles although the album's other six songs also found their way onto radio stations both then and now. Holding at number 2, Dire Straits turned out but one single from their album but oh what a single "Sultans Of Swing" was, and the album crosses the imaginary walls between rock, folk, blues, pop, country, and jazz with ease.

There are three live albums on the Thirty-threes chart for the week and two of them were recorded at the same venue. Down at 33 is Donna Summer's double-album Live And More, featuring three sides recorded at the Universal Amphitheater in June 1978 with the fourth side taken up by the "MacArthur Park Suite", a massive damn near eighteen minutes studio concoction that spun off two radio singles including an edited down take on "MacArthur Park" and my own personal favorite Summer track, "Heaven Knows", at number 18 on the list of Forty-fives. Down two to number 11, Briefcase Full Of Blues was also recorded at the Universal Amphitheater on the first of a nine-night stand with The Blues Brothers opening for Steve Martin. "Soul Man", the first of the album's three singles, was at number 33 on the list of Forty-fives. Holding at number 7, Cheap Trick's At Budokan had been recorded exactly a year ago at this point in 1979 though it had only been released in the US in February 1979 due to high demand for the previously released Japanese import pressing. 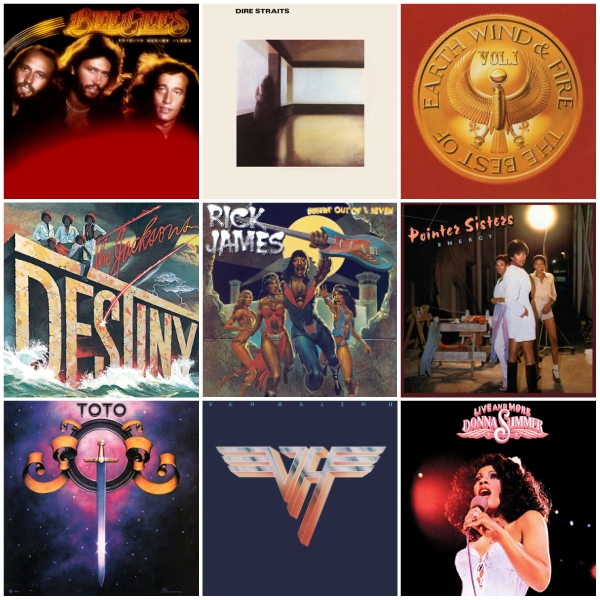 Finally, here are nine albums from the list of Thirty-threes that feature siblings. Sure, The Doobie Brothers sit atop the list but there's no shared blood amongst their members. Same goes for The Blues Brothers and The Allman Brothers, at this point in their career. The Bee Gees, Dire Straits, Earth Wind & Fire, The Jacksons, Toto and Van Halen all feature actual brothers while The Pointer Sisters and Donna Summer both feature three sisters each. As for Rick James and his album Bustin' Out Of LSeven? Read the liner notes and you'll discover both brothers and sisters contributed to that one as well. 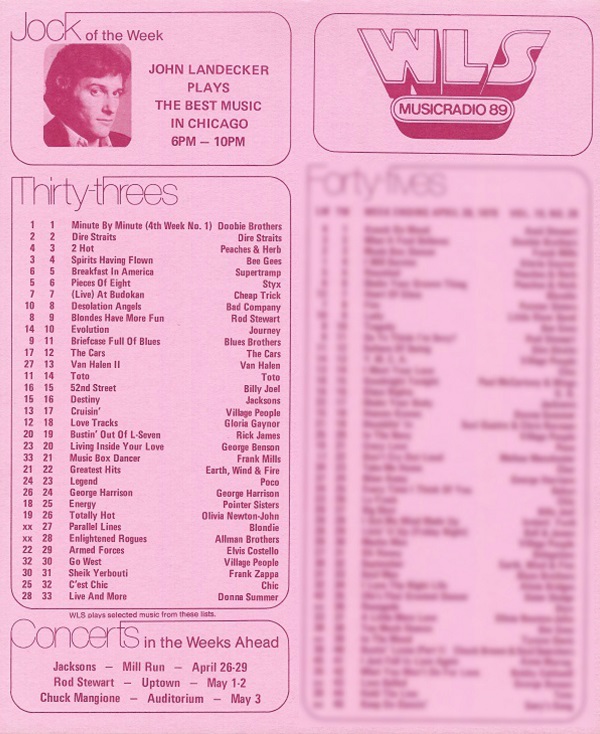