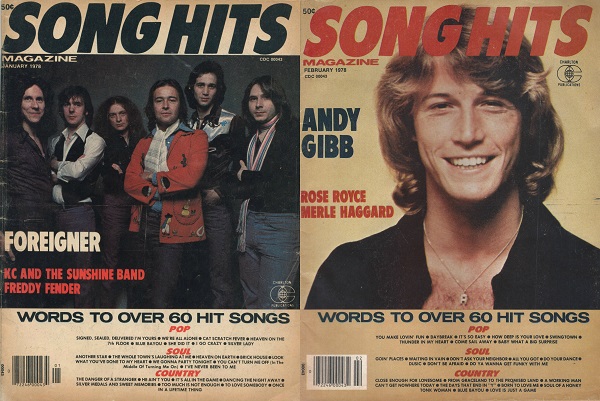 Admittedly, in hindsight, Song Hits was a lot more interesting and vitally important to me as a young music fan than it is now to me, a  slightly older music fan. The three artist profiles per issue are not that good, many of the ads are hard to read as they were not designed to be viewed in black and white while many of them are shall we say "shady". Like the British "talent agent" who emailed me last week because he had heard "all of (my) great music online" and "would like to pitch (said non-existent music) to film, commercial and television producers". Still, there is a small part of me that enjoys leafing through the small collection of about 40 issues of Song Hits magazine I have amassed with five eBay purchases, reminiscing about the songs via their lyrics and being transported back to some good times. Today, we're featuring the first two issues of Song Hits from 1978. 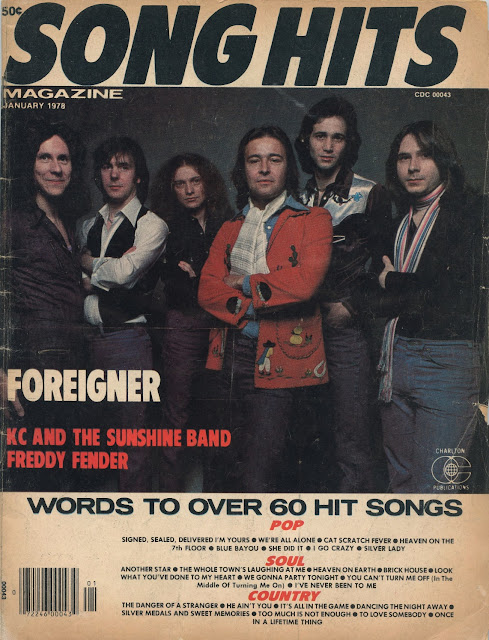 Foreigner grace the cover of the January 1978 issue as the Pop Star Of The Month and are represented via the lyrics to their hit song "Cold As Ice", the follow-up to their debut single "Feels Like The First Time". "Cold As Ice", released in July 1977 had peaked at number 6 during the week of October 22, 1977, and was off the chart by January 1978 after a twenty-one-week stay. However, the group was currently in the Top 40 with their third single, "Long, Long Way From Home". Among the other rock-ish song lyrics within the pages of this issue are Ted Nugent's "Cat Scratch Fever", Foghat's driving cover of the Willie Dixon blues classic "I Just Want To Make Love To You" from their Live album and Bob Seger's "Rock And Roll Never Forgets". On the Pop side, several of 45s from my cherished childhood collection are represented by their words, including Eric Carmen's "She Did It" with The Beach Boys on backing vocals, Paul Nicholas's "Heaven On The 7th Floor" and ELO's somber "Telephone Line", which I have on green vinyl inside a picture sleeve, with the labels reversed on the vinyl so that the A-side is labelled "Poorboy (The Greenwood)" and the B-side is labelled "Telephone Line". My favorite songs in the Soul section are "Brick House", KC and the Sunshine Band's very repetitive "Keep It Comin' Love" and Donna Summer's "I Feel Love", the issue's briefest set of lyrics. I would have included the image of the page with the Donna Summer lyrics in but this particular issue suffered some sort of liquid damage at one point and now most of the pages are extremely brittle - I tore two pages in my efforts to scan the table of contents below and called it quits. 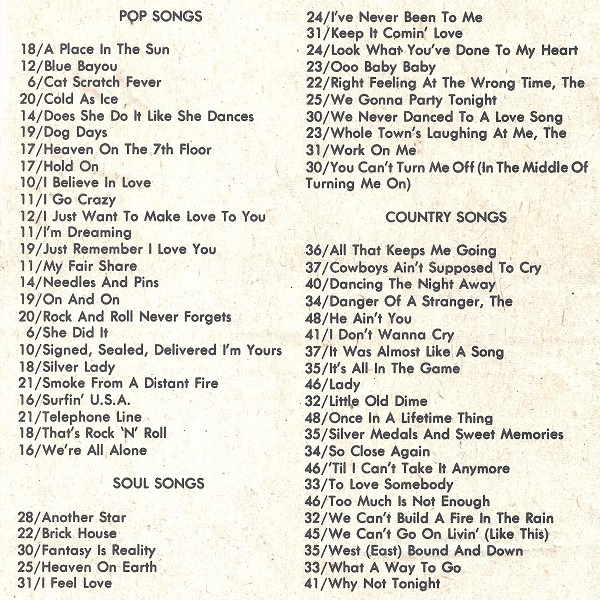 The Soul Star Of The Month is KC and the Sunshine Squad Bunch Supermen Band while the Country Star Of The Month honor goes to the late Freddy Fender, who was absolutely HUGE on the Cow Talk jukebox circa 1976-1977 with three huge hits from 1975 getting lots of quarters: "Before The Next Teardrop Falls", "Wasted Days And Wasted Nights" and his bilingual cover of Ivory Joe Hunter's "Since I Met You Baby". I heard those three songs so many times that if you give me a few minutes I could probably tell you what their respective B-Sides were as they got played as well. Unusually for Song Hits, Fender is not otherwise represented within the magazine with song lyrics though he continued to have Top 40 Country hits through 1979. Country music has given us many memorably named artists and Narvell Felts, one of those all-time great names, is represented with the lyrics to his cover of the Bee Gees classic "To Love Somebody". The familiar lyrics to Jerry Reed's "West Bound And Down" from Smokey and the Bandit (it plays about thirteen minutes into the film) is also featured in the Country section but my favorite set of lyrics amongst the twenty-one songs in the Country section of this magazine are the ones written by the legendary lyricist Hal David and sung by Ronnie Milsap, a heartbreak ballad titled "It Was Almost Like A Song". 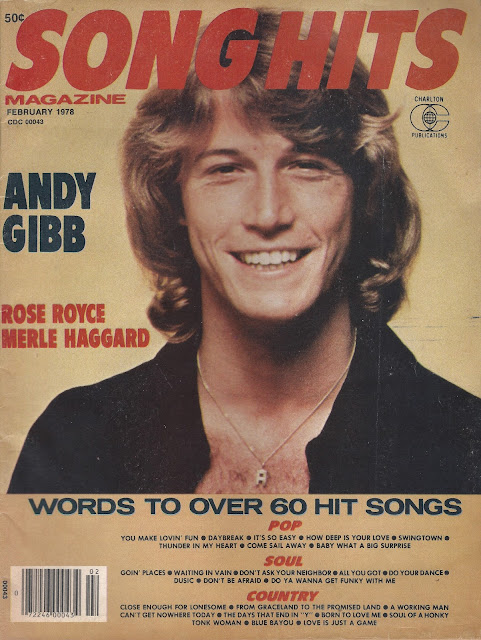 Andy, the youngest of the four Brothers Gibb, graces the cover of the February 1978 issue of Song Hits as the Pop Star Of The Month. While his red-hot older brothers appear in the issue with the lyrics to their Number One smash "How Deep Is Your Love", nineteen-year-old Andy just gets the cover and three pictures splashed across a two-page spread inside even though he had one Number One under his belt and would score his second chart-topper in March 1978 with "(Love Is) Thicker Than Water". Some of my favorite 45s are represented in the Pop section including Chicago's "Baby What A Big Surprise", Styx's "Come Sail Away" and "Swingtown" from The Steve Miller Band. You may notice that there are several songs from the January issue that make an encore appearance in the February issue. Maybe this was a standard practice. I don't know but I'll be paying attention going forward as I review issues. One such song, Linda Ronstadt's cover of "Blue Bayou", even switches categories within the magazine, going from Pop in January to Country in February and I got no problem with it. There is also a typographical error in another song title: The Emotions song "Don't Ask My Neighbor" is titled "Don't Ask Your Neighbor" in both the table of contents and within the Soul section itself although the printed lyrics are correct. Rose Royce is the issue's Soul Star Of The Month and, in addition to their profile, their song "Do Your Dance" is represented by its lyrics. The Soul songs that stand out for me are Brick's "Dusic", Peter Brown's "Do Ya Wanna Get Funky With Me" and Earth Wind & Fire's "Serpentine Fire". The legendary Merle Haggard gets the Country Star Of The Month accolade and the lyrics to the title track from his A Working Man Can't Get Nowhere album as well his Elvis Presley tribute "From Graceland To The Promised Land", the lone original from his Elvis covers album My Farewell To Elvis, are printed in the back third of the issue. (Those were two of the three albums Haggard released in 1977, with the third being Ramblin' Fever.) The previously mentioned Linda Ronstadt is the only other artist represented by two sets of song lyrics ("Blue Bayou" and "It's So Easy") and she is the only artist to have a song in two categories, with one in Pop and one in Country.