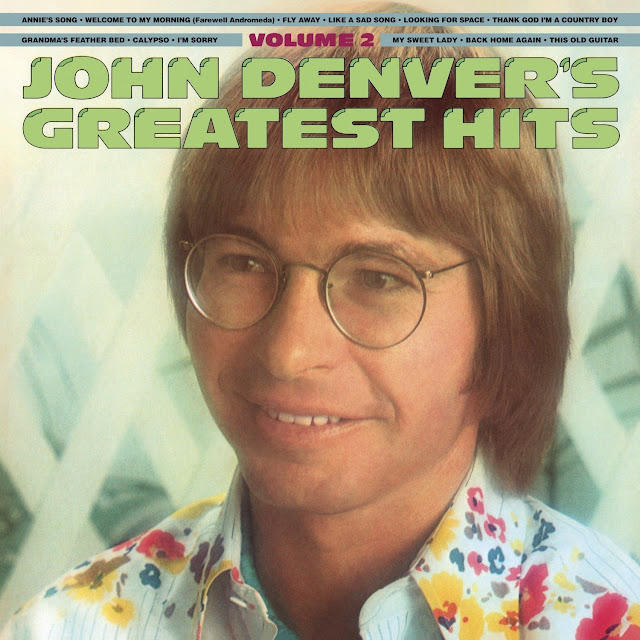 John Denver's Greatest Hits, Volume 2 was released in February 1977 and debuted on Billboard's Top LP's & Tape chart way up at number 18 even while his previous compilation, 1973's John Denver's Greatest Hits, sat at number 119 on the same chart, enjoying a resurgence in its 170th week on the chart. It would eventually peak at number 6 and be certified double platinum. In between the two Greatest Hits volumes, Denver had notched four Top 10 albums, including two Number Ones while also scoring three Number Ones on the Hot Country Singles chart, four on the Hot 100 and nine on the Easy Listening chart in 1974-1976. Just as he had done on his first hits collection, Denver entered the studio to re-record three songs for inclusion on Volume 2 that he felt were not good enough in their original albeit hit versions. Here at The Hideaway, this album often rides on the coattails of Denver's first Greatest Hits album so one is rarely played without the other following immediately.

While John Denver's Greatest Hits, Volume 2 will not convert new fans to Denver's signature wire-rimmed aw shucks granola mountain good time folk music, the album was a much-needed follow-up for established fans with crucial hits such as "Annie's Song", "Calypso" and "Fly Away" featuring Olivia Newton-John though it was later superseded by more comprehensive compilations including Definitive All-Time Greatest Hits in 2004 and The Essential John Denver 3.0 limited-edition triple disc set in 2008. It also marked the high point of Denver's career on the pop charts as only two of the eleven charting singles after 1977 reached the Top 40. Back in 1977, John Denver's Greatest Hits, Volume 2 was and still remains a Greatest "Greatest Hits" Album. The album first appeared on compact disc in 1983, with new cover art (below) also gracing the re-release of the album on both vinyl and cassette. 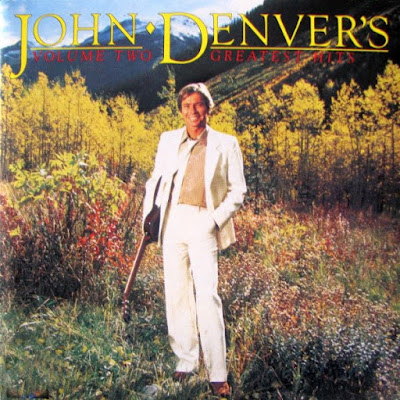 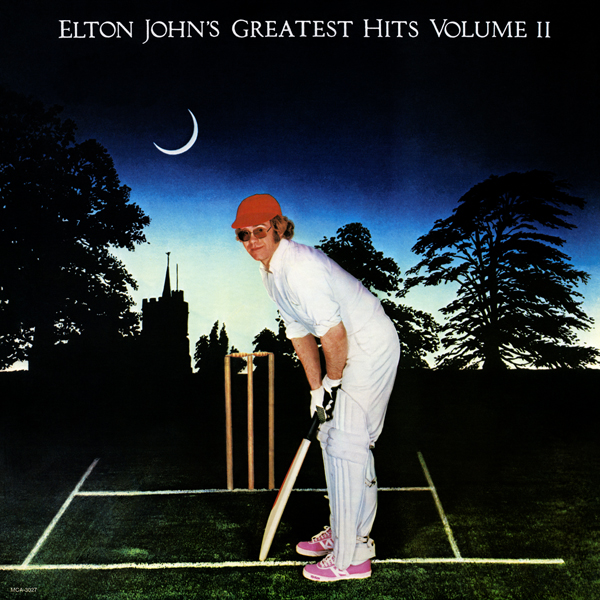 Elton John's Greatest Hits, Volume II was released in September 1977 and debuted on the Top LPs & Tape chart at number 51 and would peak at number 21 in a relatively brief twenty-week stint. John's previous Greatest Hits album, released in November 1974, had peaked at Number One for ten weeks on its way to becoming the best-selling long player of 1975 and eventually earned Diamond certification for sales in excess of 16 million in the US alone.

Volume II may have been a shadow of its predecessor on the charts but for his album-buying fans, it was an absolute must buy as it contains four singles (above) that had never appeared on an Elton John album up to that time including his spectacular covers of "Lucy In The Sky With Diamonds" and "Pinball Wizard" as well as "Don't Go Breaking My Heart", his chart-topping duet with Kiki Dee. And yet, much like John Denver,  Elton John had peaked on the Pop chart and though he would go on charting for the next three decades, he was most successful on the Adult Contemporary charts where he would have thirteen Number Ones between 1977 and 2001 compared to just two Pop Number Ones in that same span. For our money, Volume II is the better listen though not by much as both albums are unanimous Greatest "Greatest Hits" albums surrendering only to later compilations like Greatest Hits 1970-2002 (2002) and Rocket Man: Number Ones (2007). 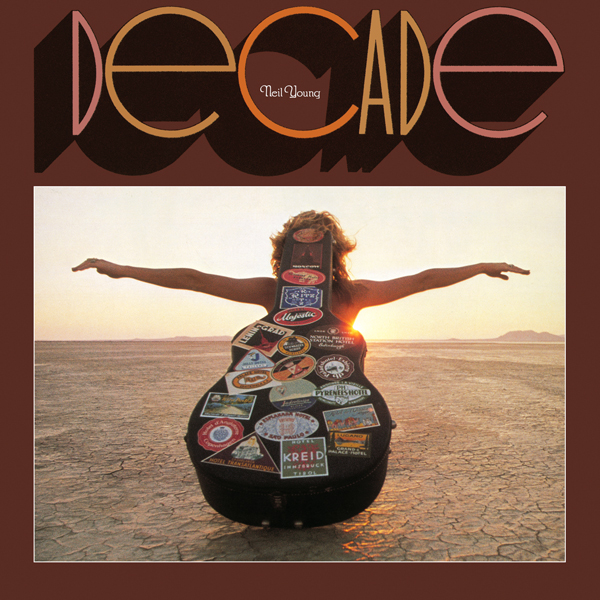 Decade, a three-disc compilation from Neil Young was released in October 1977 to near-universal critical acclaim. Though it was originally scheduled to be released a year prior, Young's unwavering quality control standards held it back until he was ready. (That and the recording of two additional albums in 1976.) Featuring reproductions of his own handwritten track by track liner notes, the packaging of Decade may have been a glimpse at the future of the boxed set artist anthology craze of the early 1990s. Decade was released with a $14.98 MSRP and debuted on the Top LPs & Tape chart at number 110. That week's chart - November 26, 1977 - featured one other triple album set (Wings Over America at number 200) and one four-disc set (1970's Elvis Presley's Worldwide 50 Gold Award Hits Vol. 1 at number 137 in its eleventh week re-charting as a convenient and comprehensive grieving vessel for The King's legions of fans).

Decade eventually peaked at number 43 and was later certified Platinum for selling a third of a million copies but because each disc counts as one copy sold, its three discs turned that third into one million. I came to Decade early in 1982 when a friend in Drafting class named Larry asked if had heard it before and I truthfully answered No. The number of Neil Young songs I knew off the top of my head at that time could be counted on one hand with one finger left over. And that includes his work with Buffalo Springfield and in Crosby, Stills, Nash & Young. So Larry let me borrow his two cassettes, part of a large collection of tapes his older brother had left him when he moved away to attend college out of state, and over the course of four days, I fell in love with the collected highlights of Neil Young's career. Unfortunately, Larry did not have the liner notes, just the tapes, but I came across them later, while being introduced to the works of Buffalo Springfield and CSN&Y. It would be twenty-seven years before another Young compilation was released but the compact and concise single-disc Greatest Hits pales next to the expansive and encompassing Decade, though the latter itself pales next to Young's incredibly comprehensive Archives series. Four decades later, I am still following Young's idiosyncratic artistic endeavors as well as his single-minded mission to bring the best possible quality sound to the ears of the masses. 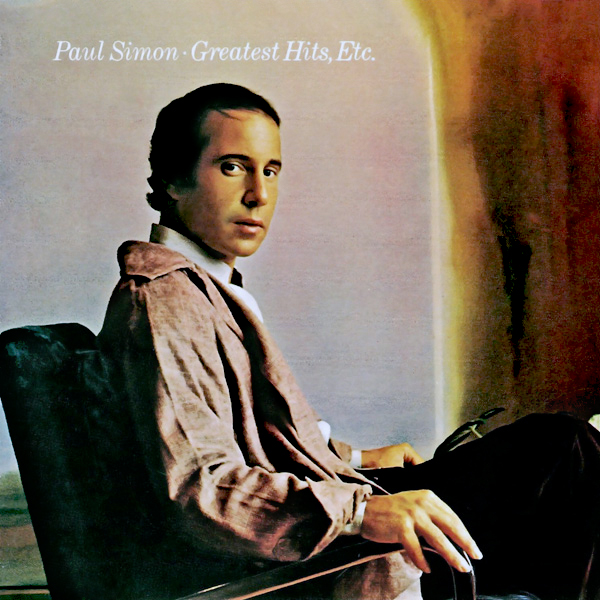 After he and Art Garfunkel parted ways for the second time in 1971, Paul Simon released his second solo album in 1972, his third in 1973, a live album in 1974 and a fourth solo disc in 1975. Those four albums were followed by Greatest Hits, Etc. in November 1977. Technically, at the time it was released, the album contained just seven hits, two previously unreleased songs including "Slip Slidin' Away" which was released as a single in advance of the album and later became Simon's fifth Top 5 single, two live tracks, and three deep album tracks. Greatest Hits, Etc. debuted on the Top LPs & Tape chart December 3, 1977, at number 74 and later peaked at number 18 in a twenty-three week stay. This album rivals Elton John Greatest Hits, Volume II as our favorite Greatest "Greatest Hits" Album of 1977.

Though we never bought Greatest Hits, Etc. on CD, our good condition used vinyl copy got plenty of plays until we picked up Negotiations and Love Songs 1971-1986 on compact disc in late 1988 or early 1989. A few years later, after we cracked the catalog search to find out which CDs they were ordering so we could reserve them ASAP, we were the very first patrons to check out the three-disc box set Paul Simon - 1964/1993 from the local public library. While we've continued to purchase Paul Simon albums through the years, we never did get another one of his hits compilations after 2002's The Paul Simon Collection: On My Way, Don't Know Where I'm Goin'. 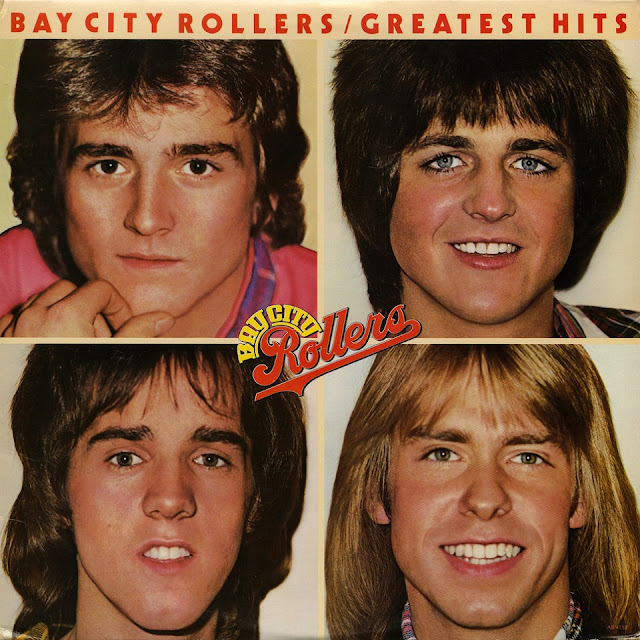 After releasing just four albums in the US, all climbed into Top 40 including the first three which were compilations of previously released songs drawn from multiple albums, and charting but eight Hot 100 singles, the Bay City Rollers released Greatest Hits in November 1977. In addition to the eight charted singles, the album includes "Maybe I'm A Fool To Love You" and "Don't Stop The Music" from 1976's Rock 'N Roll Love Letter compilation album. Greatest Hits debuted at number 101 on the Top LPs & Tape chart the week of December 3, 1977, and, in an eleven-week stay, peaked at number 77 earning the Rollers their fifth consecutive Gold certified album. 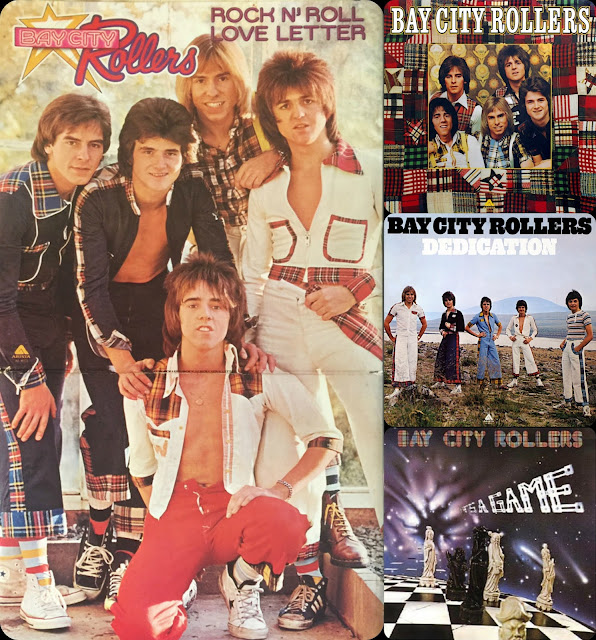 Though we had those first four albums (above), we still bought Greatest Hits though it would be the last Bay City Rollers album we were to buy on vinyl. Greatest Hits was released on CD with slightly altered artwork in 1991 and was later superseded by The Definitive Collection (2000) with 20 tracks and 20-bit remastering which was made redundant by Rollermania - The Anthology (2010) with 81 songs spread across four compact discs, just about everything the Bay City Rollers ever recorded from 1974-1981. 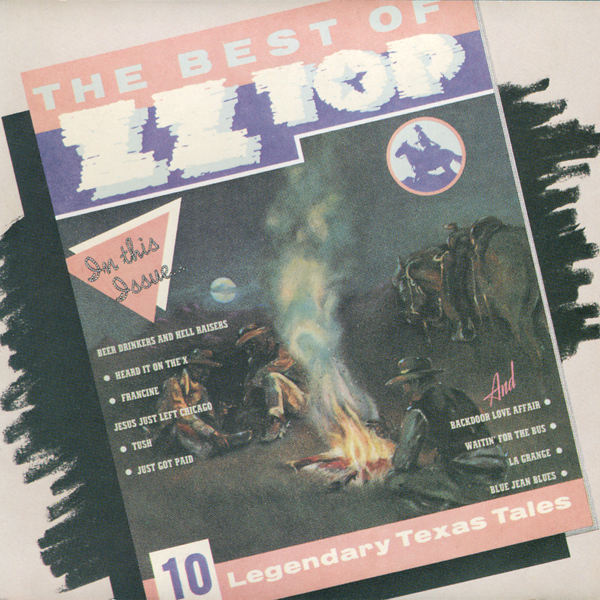 Through relentless touring and three consecutive Top 20 albums, ZZ Top built a very loyal fan base though they only managed one Top 40 single in "Tush". Uncle Sam was one of those fans, buying each of their first five albums and November 1977's The Best Of ZZ Top on eight-track and playing them constantly ("Haw! Haw! Haw!") so we grew up listening to the albums with slightly different running orders than their vinyl counterparts though frequent later listens on vinyl and CD put an end to our disorientation.

The 10 Legendary Texas Tales on The Best Of ZZ Top turn out to be the five singles from their first five albums, including a few B-Sides plus some album cuts. Someone had the great sense to put "Waitin' For The Bus" right up against "Jesus Just Left Chicago" which is how they appear on the Tres Hombres album and how I've always heard them played on rock stations. The Best of ZZ Top was basically a slimmed down retail version of the promo only ZZ Top's Worldwide Texas Tour album from 1976 - the two compilations have nine tracks in common - though the promo disc has a dozen songs compared to The Best Of's ten. 1992's Greatest Hits collection would shortchange the classic era of ZZ Top represented on The Best Of with just four of its eighteen tracks having been released before Diamond-certified Eliminator in 1983 and only two of those songs appearing in their original versions on The Best Of ZZ Top; Greatest Hits contains the infamous "enhanced" Six Pack versions of "La Grange" and "Tush". Distilled from the 4CD box set Chrome, Smoke & BBQ (2003), the following year's Rancho Texicano: The Very Best Of ZZ Top finally got it right, devoting seventeen of the twenty-one tracks on Disc One to 1971-1977 ZZ Top, using the original mixes and putting them in chronological order to boot. If you only want one comprehensive ZZ Top anthology, the double-disc, 38-song Rancho Texicano is the one. If you just want the pre-synthesizer stuff from the Seventies, then seek out The Best Of ZZ Top. If you simply want the latest and greatest, there's always The Very Baddest Of ZZ Top from 2014. It's got 40 tracks in no particular order though it is definitely heavy with the group's later output.

Let us know what your favorite single-artist compilations from 1977 in the Comments below.