For those of you playing along at home, it has been 607 days since the tape labeled "Q" appeared here on Mixtape Monday back on November 16, 2015. In that time, the entirety of the Hideaway Archives has been packed, relocated, unpacked and the tape known as "R" is apparently nowhere to be found so we roll on to the next tape in the series, tape "S". The tape is plainly labeled "S" as is the spine of the j-card insert but there are no song titles or artists lovingly written out in green ink as Mrs. HERC had done dozens of times previously. So this one is gonna reveal itself one song at a time.

Or not. Shortly, after the first song (The Murder Mix of Dead Or Alive's "You Spin Me Round (Like A Record)") began, the deck began to eat the tape and my rescue efforts proved to be unsuccessful - we lost both the tape as it snapped in two with my splicing days long behind me and the deck, a dual-well JVC TD-W709 with Dolby HX Pro, was smoking and making a godawful horrible screeching noise shortly before I unplugged it and ran it out to garage so the smoke could dissipate without setting off the smoke alarms.

After a half hour of clean-up, it was on to tape "T" and another deck off the bench, an older JVC TD-W222 that tested well - it didn't eat the first two tapes I played in it. I popped in tape "T" and pressed ➤ hoping for the best. A gentle hiss gave way to the unmistakable sound of a needle dropping onto a vinyl record and catching the spiral scratch as the instantly recognizable kick and snare drumbeat of Judas Priest's anthemic "Living After Midnight" begins playing through the speakers and we are off and rocking. 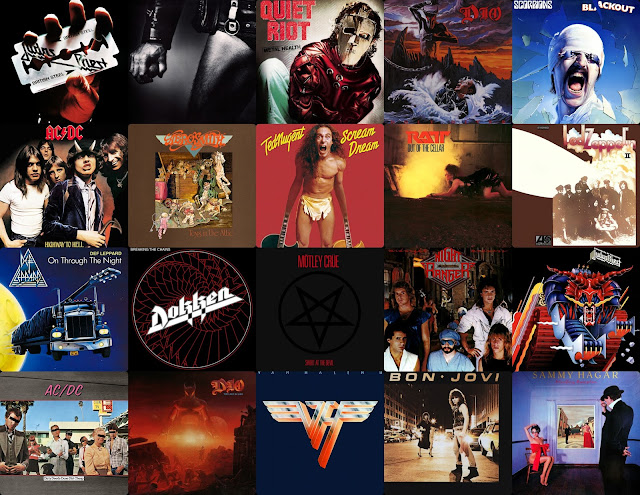 "Living After Midnight" was followed by Accept's "Balls To The Wall", keeping the menacing fun going straight into Quiet Riot's Kevin DuBrow manically urging us to bang our heads before things got real quiet for the 1:20 intro of Dio's "Holy Diver" until the guitars came marching in. And speaking of guitars, Scorpions Rudolf Schenker and Matthias Jabs bring them on "Arizona", a huge favorite here at The Hideaway. Bon and the boys share the story of a woman who liked it done medium rare though she might have been the same girl Aerosmith sang about having the kitty in the middle. I may have enjoyed Nugent's "Wango Tango" back in the day but now I can't skip the song fast enough. Fortunately, Stephen Pearcy saves the day with his delivery "Lack Of Communication" atop dueling solos from Robbin Crosby and Warren DiMartini. The Mighty Zep close out Side A with their cover of a Willie Dixon song. The whole side of the tape times out at just under 47 minutes. Pretty good for the advertised 45 minutes per side of a 90-minute tape.

"Rock Brigade", the leadoff track from Def Leppard's 1980 debut album On Through The Night kicks off Side B. Don Dokken's vocals and George Lynch's screaming guitar keep the energy high with "Breaking The Chains", one of the most popular air guitar jams here at The Hideaway. The relentless riffage remains raw courtesy of Mick Mars and the rest of his Mötley mates on "Looks That Kill" before Brad Gillis and Jeff Watson prove that "(You Can Still) Rock In America". The twin axe attack continues with "Freewheel Burning" as K.K. Downing and Glenn Tipton swap solos until the Brothers Young pledge "Dirty Deeds Done Dirt Cheap". Ratt returns with "Wanted Man", another track I liked more back then than I do now. Dio makes a second heavy appearance with "The Last In Line" before the mood lightens a bit with Van Halen's "Beautiful Girls" and Bon Jovi's "Runaway". The final song on the tape is the somewhat off, second version of Sammy Hagar's "Heavy Metal" from his Standing Hampton album, another inferior choice on my part as the only version of this song that should be heard is the original version on the Heavy Metal soundtrack album. Still, there are worse ways to close out a tape.
I have little doubt this tape got very little play from my future wife back in late 1985 when I believe it was made. We had attended (and would attend even more) concerts by all of the acts featured on this tape (EXCEPT Accept, Ted Nugent, and Led Zeppelin) during our initial courtship of 1984-1985. We would eventually witness a pathetic appearance by the nutjob Nugent as an opener for KISS in 2000, in what has turned out to be our very last concert.