When 1979 began, I was in seventh grade but by the time it was over, I was getting a handle on the rigors of eighth grade. While seventh grade girls were (mostly) a step up from their sixth grade selves, the same girls in 8th grade might as well have been Charlie's Angels, Dallas Cowboys Cheerleaders or Playboy Playmates. Or all three as a result of my raging hormones and the girls own physical development. I had a righteous crush on my 7th grade teacher Ms. B, who remains the only person I know who ever saw the Beatles - twice! -  in concert. Although I was listening more and more to the same sweet-sounding FM stereo station my Dad was listening to at the time (WLRW out of Champaign), Chicago's mighty WLS was still the station that I listened to a ridiculous amount of the time. While I had started buying 45s on the regular in 1978, my income increased dramatically in 1979 as I began mowing some of the largest lawns on Base and in town for $10 a pop as well as delivering the town's weekly paper which was free unless you wanted to pay and if you did pay, your friendly neighborhood paperboy - ME! - got 50% of the monies. I would go around collecting on Fridays and while not every week was a winner, some weeks I made $25 and all the extra money went towards more 45s and an increasing number of albums. Some of the extra scratch went towards a serious pizza addiction to deep dish slices from Garcia's and any quarters I got went towards the jukeboxes at Garcia's and the Base youth center. Some of the songs below got play in those jukeboxes in their seven inch format, but I've rounded up the dozen tunes below specifically for their twelve inch mixes. 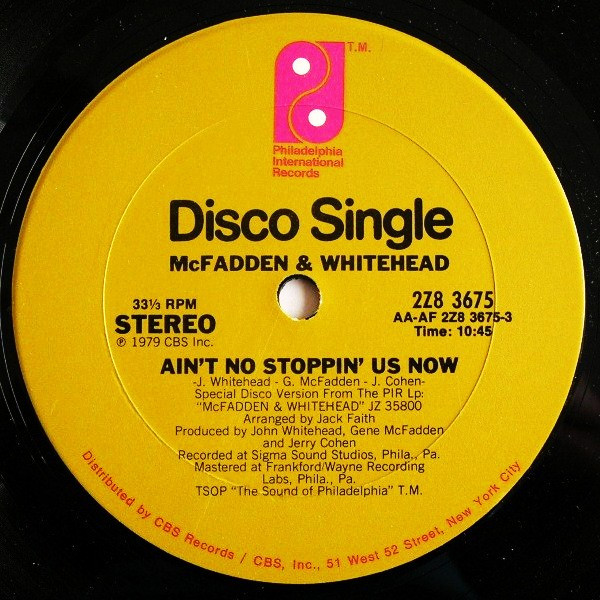 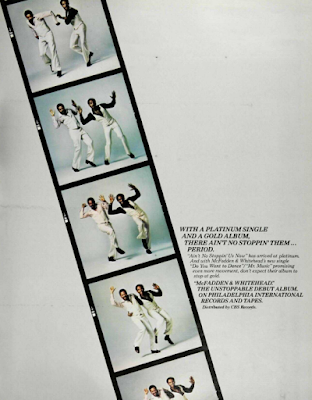 Clocking in at just over seven minutes on their self-titled album, (Gene) McFadden and (John) Whitehead's "Ain't No Stoppin' Us Now" was not a track to be trifled with yet it was sliced in half for radio and jukebox play, just barely clocking in at a measley 3:38. Unbeknownst to me back then, there was a monster, damn near eleven minute Special Disco Version of "Ain't No Stoppin' Us Now" getting play in clubs. I've called the song one of the most joyous, uplifting and inspiring disco songs ever recorded and finally adding the 10:45 Special Disco Mix to my personal collection in 1997 via the seventh and final volume of Phat Trax: The Best Of Old School was certainly a highpoint of that year. Well that and my tenth wedding anniversary. And the tenth birthday of my baby girl. 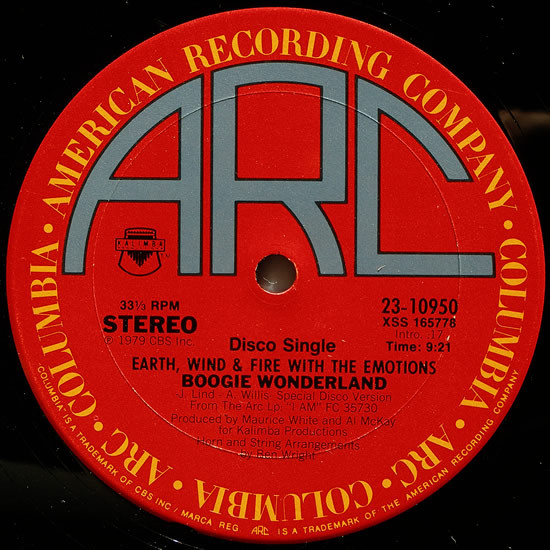 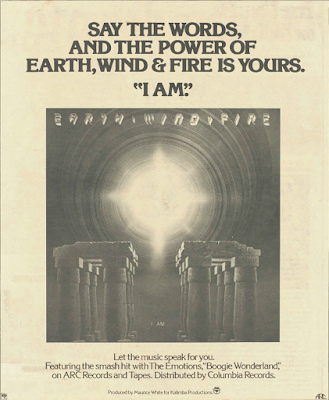 "Boogie Wonderland" is impossible to resist and while researching this article I came across the label pictured above that promised heretofore unheard delights, with the Special Disco Version running nearly a minute longer than the longest version of "Boogie Wonderland" and the game was afoot. But alas, a quick stop at DJ Richie P's Fun With Vinyl site deflated my high hopes - the label was a misprint.  The actual Special Disco Version of the song comes in right where my copies do, around the 8:20 mark. Still, it is a phenomenal song and I love to hear it as often as I can. Coincidentally, one of the discs I have this version of the song on is the Phat Trax disc mentioned above. 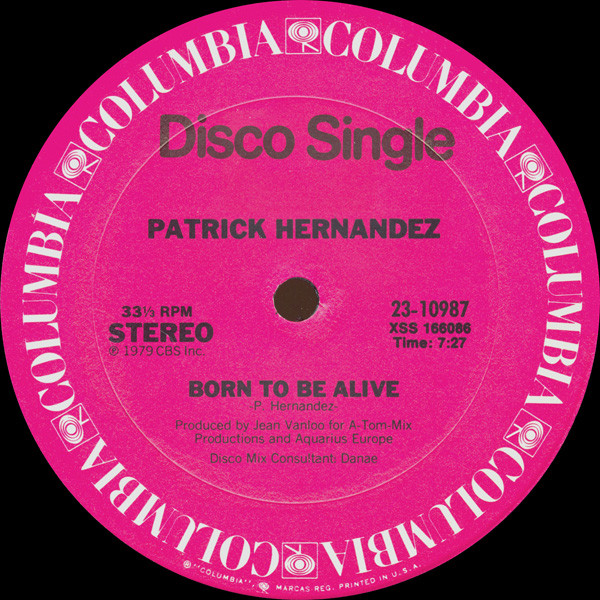 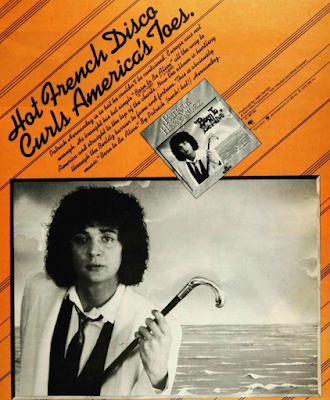 Here's another fun fact: "Born To Be Alive" and the two songs above all appear in the film Skatetown U.S.A. though only two of the songs appear on the movie's official vinyl soundtrack album. (Only one of the songs appears on the movie's official digital soundtrack.) It was at the local skating rink where I first heard "Born To Be Alive" though some months later it appeared on one of the jukeboxes on my extremely small route. Never heard it on the radio until much later. The song has been a long time morning alarm favorite and has even spent a significant amount of time as my default ringtone. It is one of the many songs I'll never ever tire of hearing and definitely one that makes me wanna move my feet and involuntarily clap my hands. 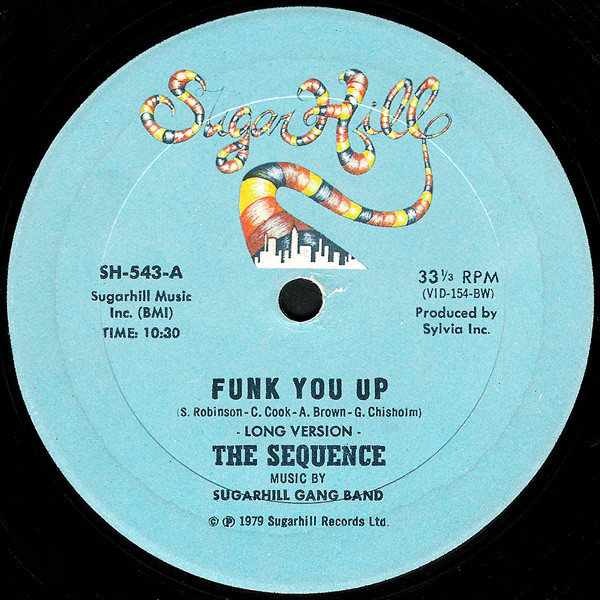 "Funk You Up" is a song written and performed by three high school cheerleaders from South Carolina so it made absolutely perfect sense for our junior high cheerleading squad to perform a routine to the song just before Christmas Break in 1979. (The photo below focuses on the one cheerleader who funked me right on up, Ms. LaLani.) Listening to the song nowadays, it is relatively harmless but back in 8th grade it was the first female rap song and some of us lost our damn minds over it. I do not know whose idea it was for the ethnically diverse group of attractive young women who cheered for our junior high basketball team to perform a cheer routine to the suggestive "Funk You Up" but I am eternally grateful to her or him. Fun fact: Angie B. of The Sequence became R&B diva Angie Stone and later appeared on a quasi-remake of her group's seminal song in 2003. 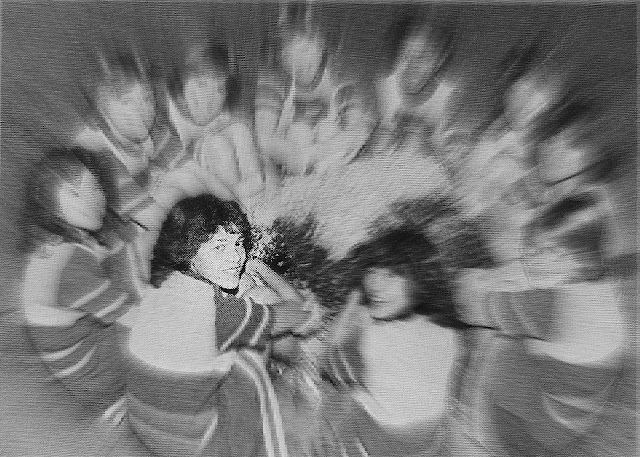 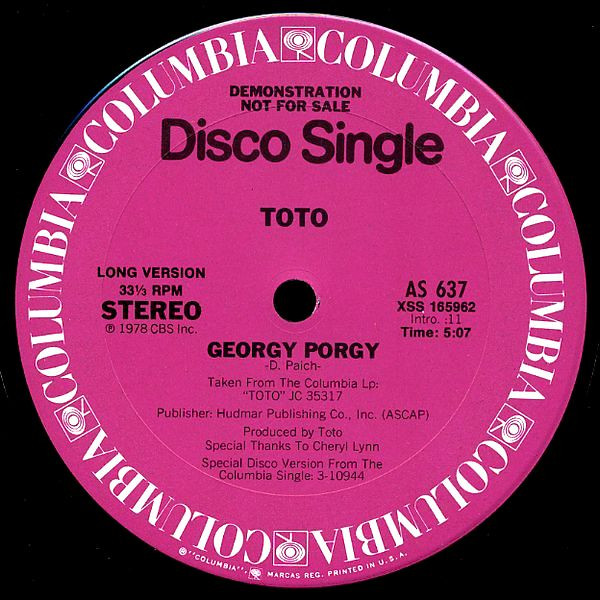 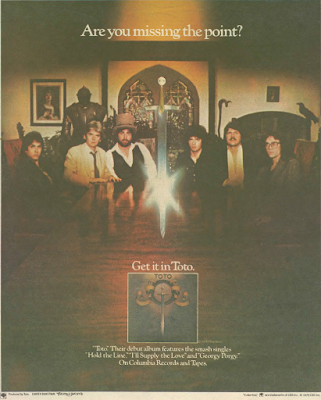 Toto's debut album features the rockin' "Hold The Line" on Side Two but smack dab in the middle of Side One is the sleeper hit "Georgy Porgy" featuring Cheryl Lynn. After the Air Force Performance Band (or something like that) came and performed at out school, doing a scorching version of "Hold The Line", I borrowed a friend's copy of the Toto album and didn't think much of it. "Hold The Line" remained a favorite even as I added successive Toto albums to my collection. Flash forward to 1991 and I hear MC Lyte's "Poor George" and can't get the music out of my head for weeks. It's familiar but I had no idea what it was until I was in Wherehouse Records one night and I hear those same haunting guitar licks. Went up front, asked what we were listening to and the clerk handed me the CD case for Club Columbia. That CD and I have lived happily ever after ever since. 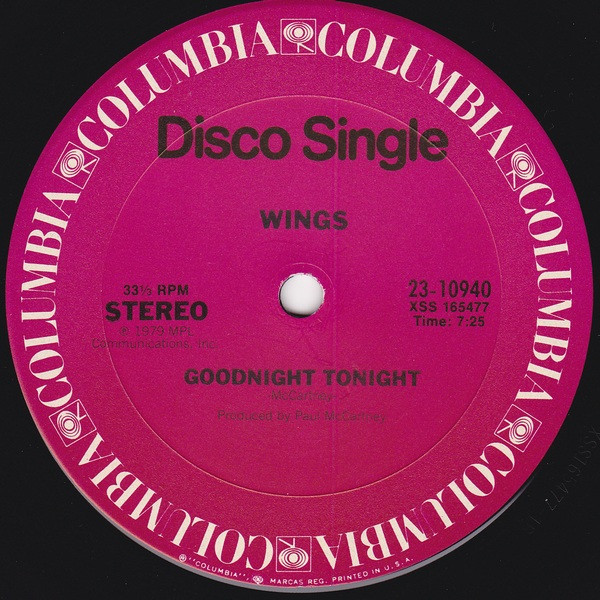 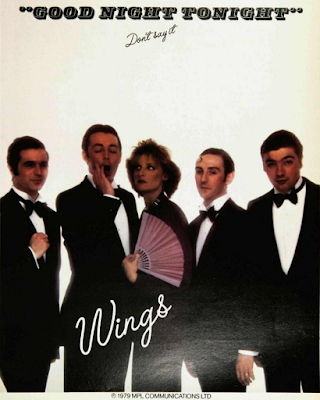 "Goodnight Tonight" was a huge hit on WLS in the Spring and Summer of 1979. It was a stop gap, between albums single and I picked it up on 45 as soon as I found it. It was more than a few years later before I somehow became aware of this longer version of the song and then it took me another few years to secure a scratchy vinyl copy and I gladly upgraded to a digital version soon after that. I never knew a music video for the song existed until the early 2000s. While I generally love McCartney's solo and Wings stuff, I always perk up a bit more when "Goodnight Tonight" (or "Silly Love Songs") comes up in the shuffle. 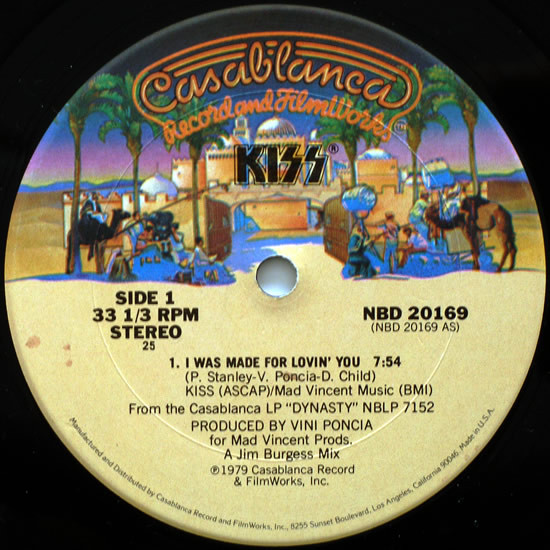 Jim Burgess was a classically trained tenor and opera lover who became one of the hottest club jocks on the scene from 1975-1981 before abruptly retiring. Such were his skills that he was called upon to make disco mixes of non-disco records like Nicolette Larson's "Lotta Love" and The Doobie Brothers' "What A Fool Believes" as well as obvious disco records like Rod Stewart's "Da Ya Think I'm Sexy", Alicia Bridges' "I Love The Nightlife" and Kiss's disco rock trainwreck hybrid "I Was Made For Lovin' You".  I was completely oblivious to his remixes of the songs back in the day but consider myself a huge fan of his work, having discovered most of his mixes after his untimely passing in 1993. 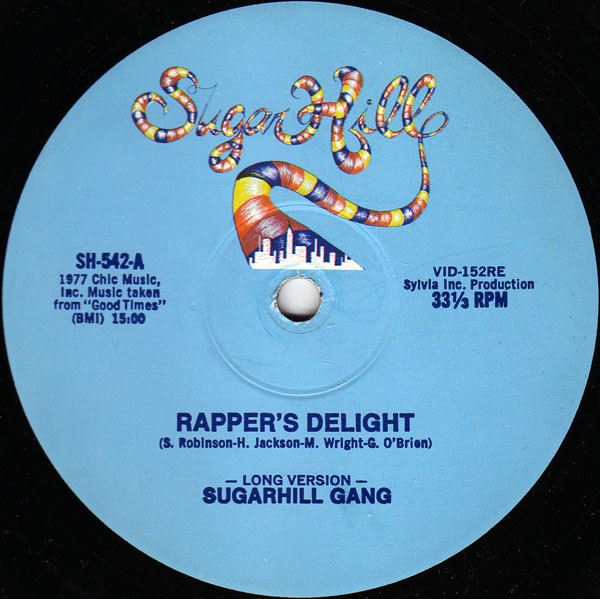 This is the granddaddy O.G. and I first heard at a junior high basement party in the Midwest of all places. It was the birth of a sound, a label, and an entire genre. It is often a punchline these days but even though the music and most of the rhymes were lifted from other artists, "Rapper's Delight" is a stone-cold, influential classic. 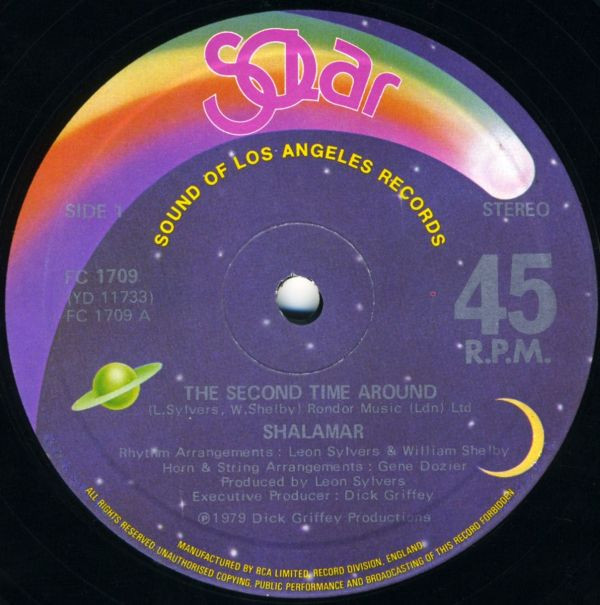 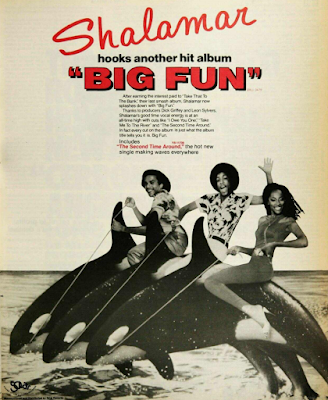 It's no secret I'm a big fan of Shalamar's music and Howard Hewett's voice, in particular. My favorite Shalamar song is "The Second Time Around" with über hooks from Leon Sylvers III, who also wrote "High School Dance" for his family group The Sylvers and "And The Beat Goes On" for The Whispers among many, many other great songs. This song is a bouncy 113 BPM and the uncredited twelve inch remix is my jam. 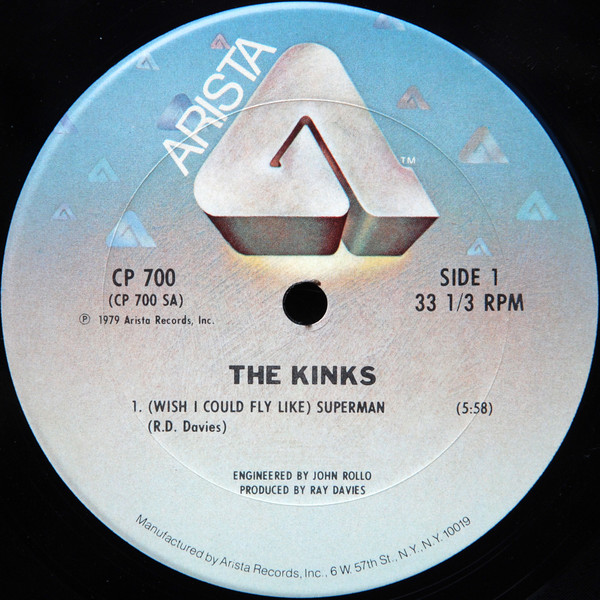 Another hybrid rock-disco tune? Yes, please. Ray Davies deadpan delivery of the verses counters nicely with the underlying guitar line and don't even get me started on that super stuttering disco bassline.  The Disco Version adds two minutes to the track from the Low Budget album, which Dad got when he failed to return his Columbia House Record Club Selection of The Month card in time. I recorded it onto one of those three for a dollar cassettes sold in drug stores, a sixty minute tape with the A side on the A side and the B side on the B side. While I realize it probably isn't the best Kinks album, it certainly is my favorite Kinks album. 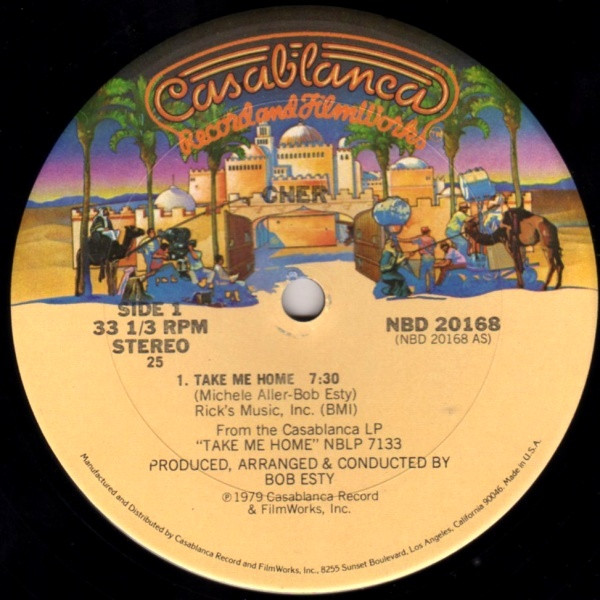 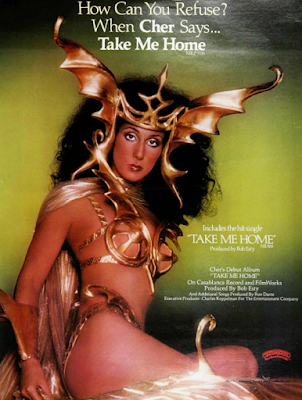 I've always loved the sound of Cher's voice and her brief tenure (1978-1979) as a Casablanca disco diva was just another chapter in her incredibly long career - she's had hits in what each of the past five or six decades now? Back when I was twelve and thirteen, hearing Cher plea "Take Me Home" was too much for my little brain but I enjoyed hearing it anyway and still do. While I like her voice, I've never found her attractive although she seemed to have a good sense of humor based on The Sonny & Cher Show. Great voice, great personality - just don't make me look at her. Would you believe I have no memories of this fantastic song before a few years ago when all the Philadelphia International Records compilations started coming out in the UK? I mean I had the song on the fourth volume of Smooth Grooves, Rhino's slow jams series, but if you thought I listened to that disc with any sort of regularity, you'd be sorely mistaken. But then the Philadelphia International Records 12" Singles dropped in 2006 with this eight minute Special Disco Version and a spark was lit, a flame was fanned but it soon died out. The song's strongest features for me are the intricate sisterly harmonies of Brenda, Shirley and Valerie and the very uncharacteristic for PIR, electronic sounding backing track. In 2012, the Philadelphia International Records: The 40th Anniversary Box Set briefly rekindled my love for "You Gonna Make Me Love Somebody Else" but once again it faded until two years later when el niño roca blanda began publishing his disc by disc review of the PIR Box that it stuck and the song has found its way into more than a few of my personal playlists. I added the Jones Girls self-titled debut album to my collection in 2015 as part of the 20 disc Philadelphia International Records - The Collection, a collection of twenty of the label's classic albums.