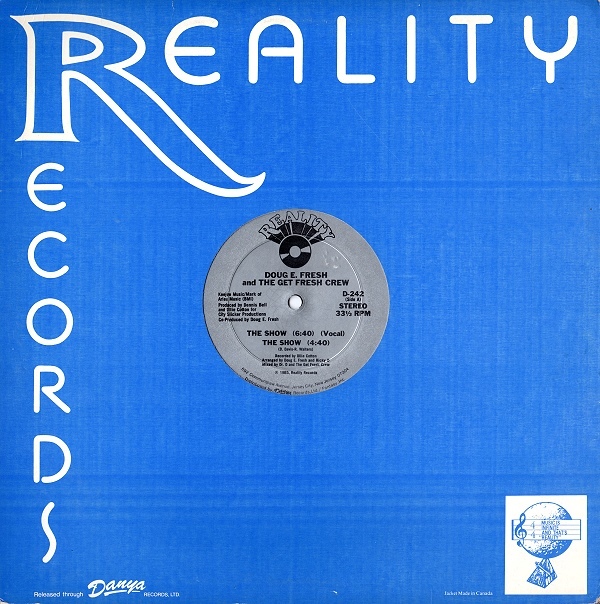 Recently, my good buddy Mark aka the soft rock kid™, revealed his 85 favorite singles from 1985 in a series of posts over at 1976-1985: My Favorite Decade.  Inspired by his epic series, I've come up with a list of my own that somewhat compliments it - My Twelve Favorite Twelve Inch Singles of 1985.  The list is obviously subjective - let me state unequivocally that I prefer these mixes to their album and 45 counterparts - and is strictly limited to U.S. releases currently in my collection. 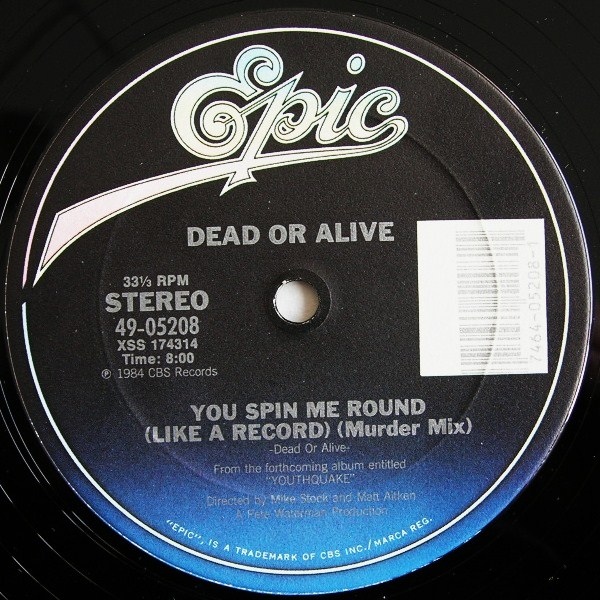 The list begins with the HiNRG everything but the kitchen sink production of Stock-Aitken-Waterman and the Murder Mix of Dead Or Alive's "You Spin Me Round (Like A Record)" featuring future plastic surgery addict Pete Burns on vocals. This mix should not be confused with The Performance Mix, which clocks in at 7:32. How to tell them apart when listening?  Murder Mix begins with the sound of glass breaking while The Performance Mix begins with Burns warning "Watch out here I come". 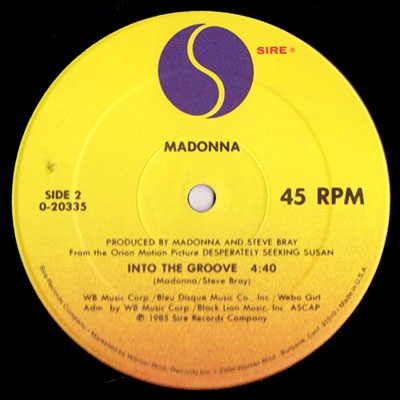 While "Into The Groove" was topping charts around the world, it was ineligible for Billboard's Hot 100 as it was solely available in the US at the time as the flipside to the twelve inch of "Angel", the third single from Madonna's Like A Virgin album.  As our material girl was burning up the charts at this time, the decision was made not to release "Into The Groove" as a single itself.  Though I do not like a lot of Madonna songs beyond the pure danceability of her first album, the throbbing keyboards of "Into The Groove" get me every time. 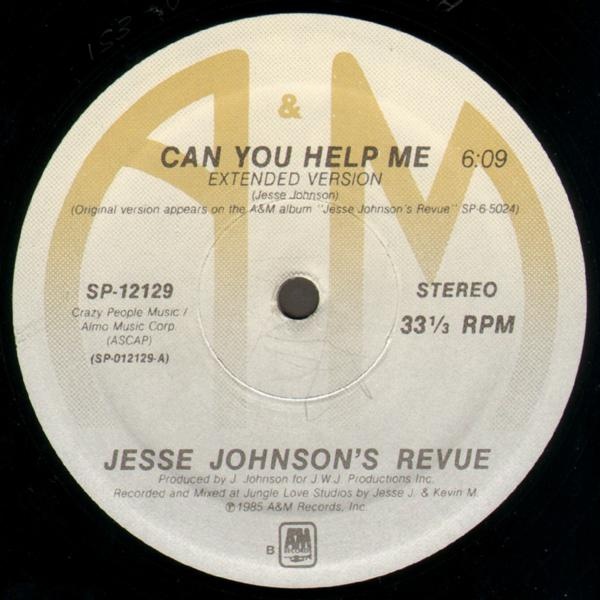 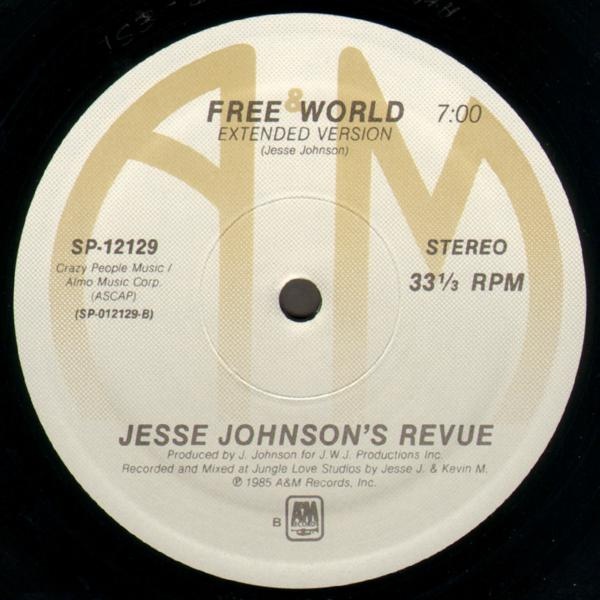 Some of the best twelve inch singles turn out to be the ones with more than one good song or mix on them. Former guitarist for The Time, Jesse Johnson struck out on his own in a big way in 1985, releasing an album and spinning off four singles.  One of those singles was for the song "Can You Help Me".  I first heard the flipside to the single, a song called "Free World" while in Zip's Music in Park Mall. The song sounded more like Prince than the rest of Johnson's material (not a bad thing) and I gladly purchased the twelve inch single featuring Extended Versions of both songs.  Like Prince, Johnson had included a high quality non-album song as the B-side to one of his singles. 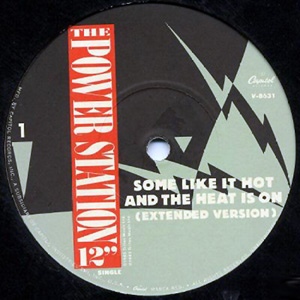 Eighties studio supergroup The Power Station made an immediate impact on me with the absolutely thunderous drum sounds of Tony Thompson.  The twelve inch Extended Version only enhanced my enjoyment and it quickly became my preferred version of the song, making numerous mixtape appearances. 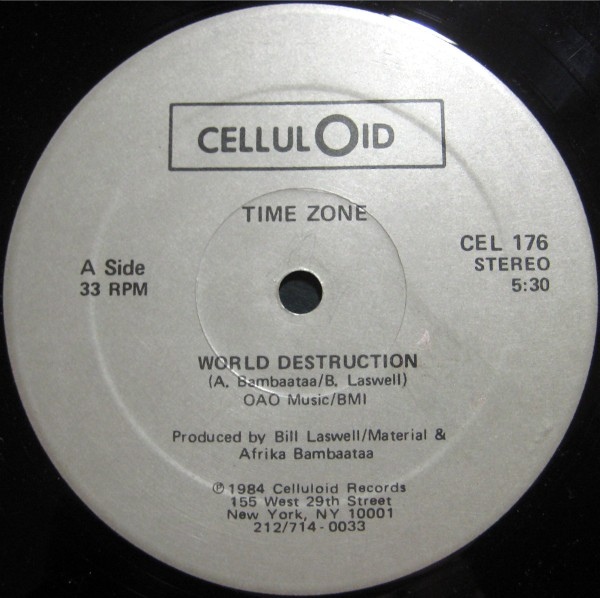 A gloriously rough-edged mash-up of nihilist punk and world aware hip-hop that went off like a bomb whenever I played it, Time Zone's "World Destruction" was another one of those "heard it in the record store and bought it that same night" twelve inch finds.  Johnny Rotten Lydon brought the droning punk whine while Afrika Bambaataa brought the dire warnings with Bill Laswell and Material doing everything else. Because of the way I perceived the song, I often grouped "World Destruction" with Paul Hardcastle's "19" or George Clinton's "Bulletproof" or "Double Oh-Oh" on mixtapes. Ka-boom! 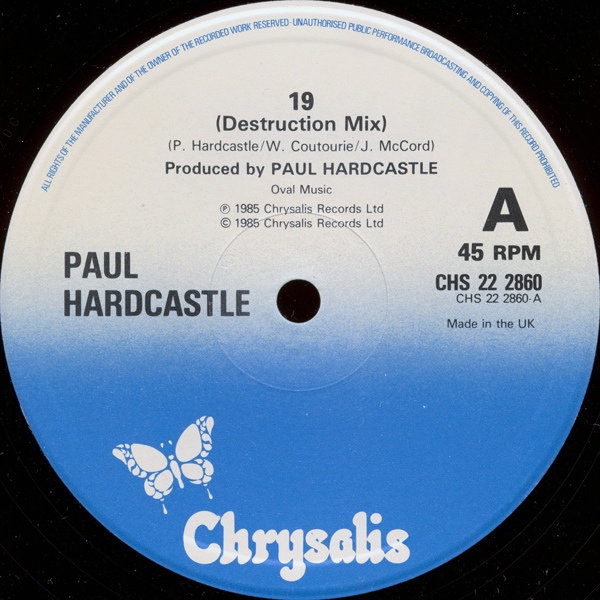 The stuttering effect of "19 (Destruction Mix)" rubbed a lot of people the wrong way.  Heck, even though my father - a proud Vietnam veteran himself - agreed mostly with the song's message, he hated the music.  He was 19 when he dropped out of high school and joined the Air Force.  Though this isn't the first mix of "19" I ever heard or the last thanks to the deluge of 30th Anniversary remixes that have been released in 2015, the Destruction Mix remains my favorite. 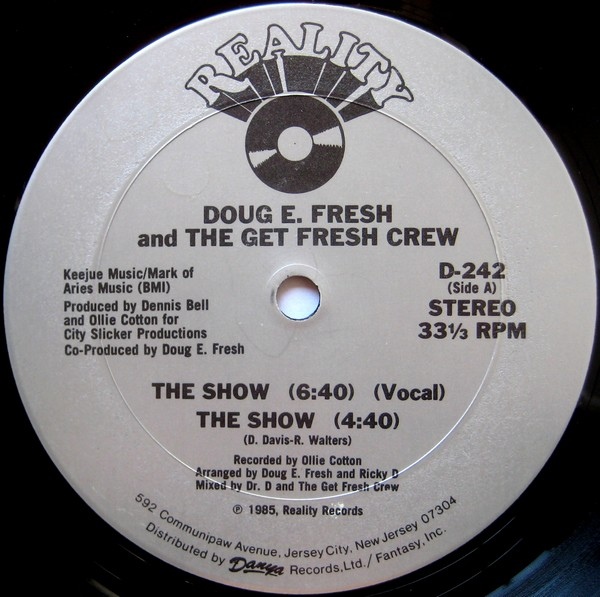 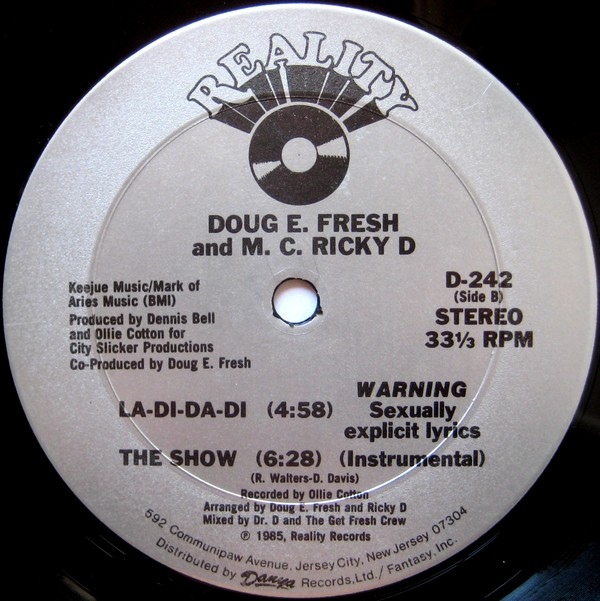 Another double-sided monster twelve inch single, I spent the final four months of 1985 looking for a copy of Doug E. Fresh's "The Show" b/w "La-Di-Da-Di", eventually locating a second pressing as pictured at top of this post and the two label scans sometime in 1986.  It was CRAZY popular, spending half a year on the Dance/Disco Sales chart and nearly as long on the R&B chart. 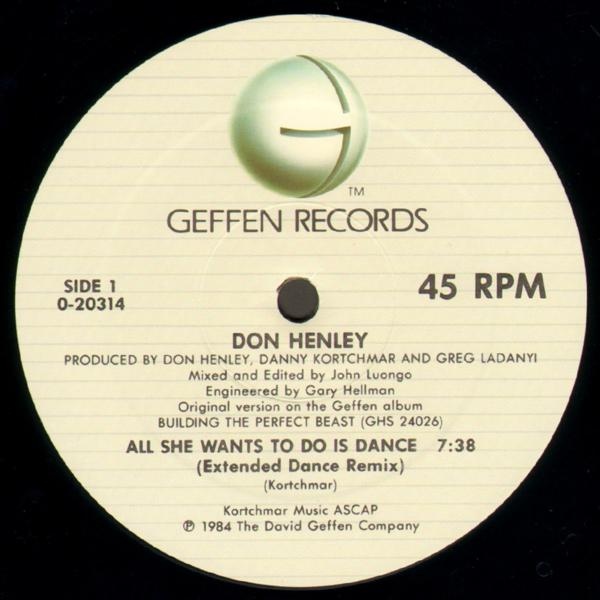 John Luongo remixed "All She Wants To Do Is Dance" to within an inch of its life and most fans of the song hate his remix.  It's clangy, bangy and unlike anything else I have ever heard and I love it dearly.  Until recently, I inexplicably had four copies of the twelve inch in my collection.  That fuzzed-out guitar riff that worms in and out of the mix is my favorite part. 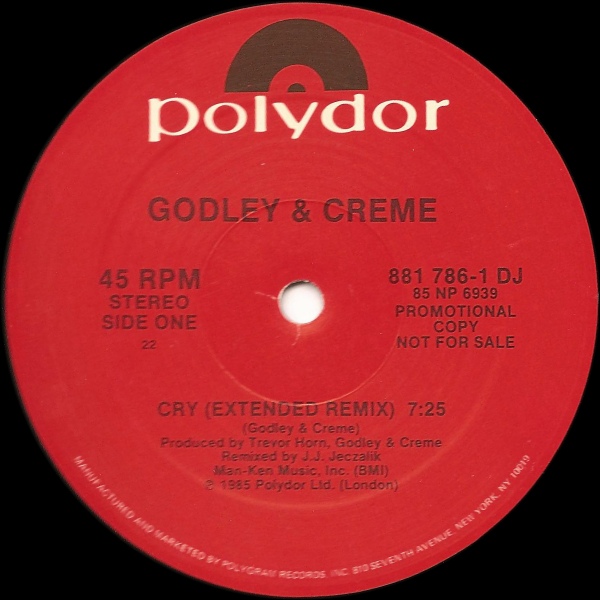 Like a lot of Trevor Horn productions, Godley & Creme's "Cry" comes in many iterations but my favorite is the Extended Remix on Side One of the twelve inch single.  (The YouTube video I've included above is NOT that version.) The song just chugs along and the pained acapella intro on the Extended Remix sets it off perfectly. While most people associate the song with the groundbreaking music video, "Cry" is forever linked in my mind with the final scene of the Definitely Miami episode of Miami Vice. 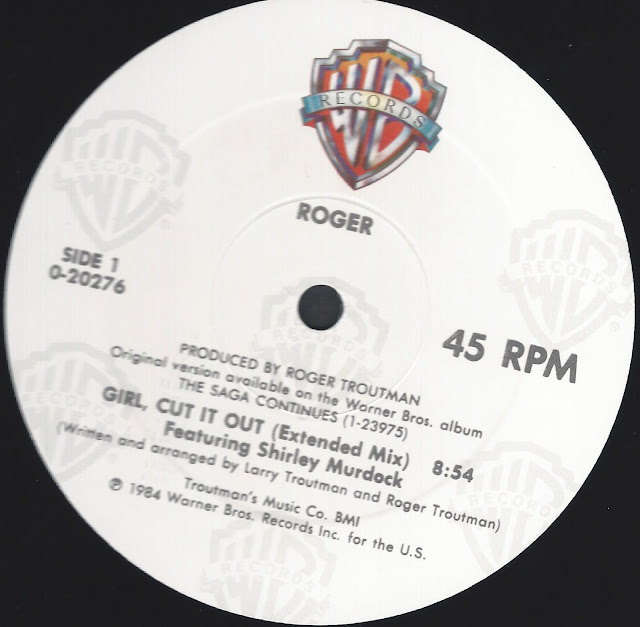 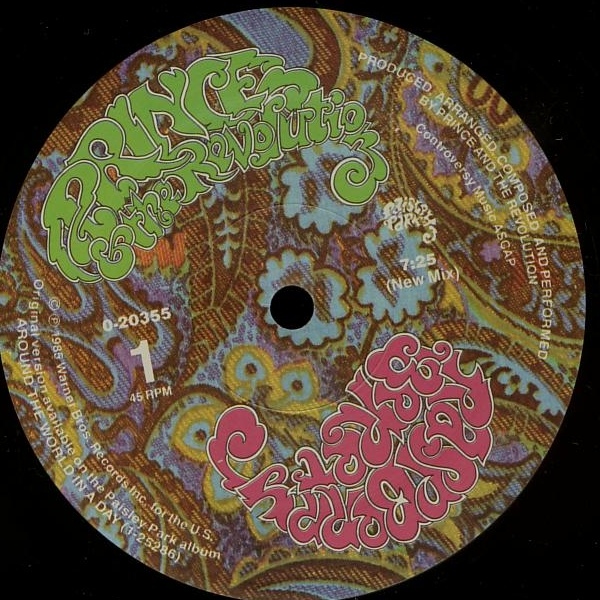 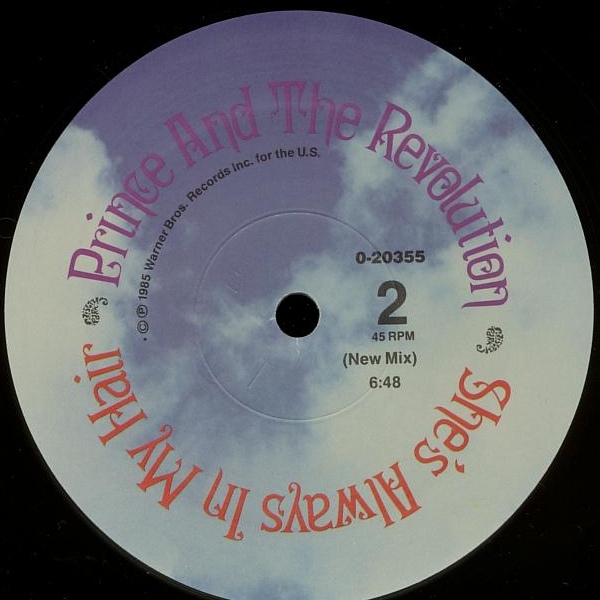 Prince would release three twelve inch singles in the U.S. from 1985's Around The World In A Day and "Raspberry Beret" was both the first and my favorite.  The song is a winner and the remix only enhances its hookiness after an extended intro of finger cymbals, guitar strumming and coughing.  The rocking non-album B-side "She's Always In My Hair" sees the diminished return of the finger cymbals and Prince's guitar riffery.  Simply one of my favorites out of his sizable stash of B-sides.  People who know what a fan I am of the Prince's music ask if I was sad to see him pull his music off of Spotify.  Yeah I was for about a second but now instead of him getting paid every single time I listen to one of his songs or albums or remixes, he gets nothing though he is now my third most played artist instead of first. 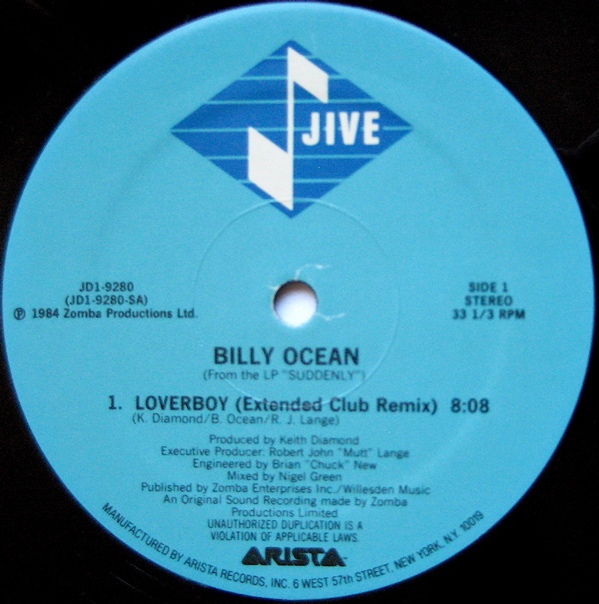 Saved my favorite twelve inch single from 1985 for last.  The Extended Club Remix of "Loverboy" by Billy Ocean, written and Executive Produced by Robert John "Mutt" Lange though Nigel Green gets credit for the mix.  I love this remix of an otherwise unremarkable album cut so much  and the fact that one of my friends knew I would and bought it for me makes it that much more special.  From the generic space synth opening, to the drum breaks and horn synth stabs to that wonderful galloping guitar loop (or is it a bass loop?) that comes riding in just beneath Mr. Ocean's impassioned vocals.  There are many edits, stutters and mix tricks going on that "Loverboy" can be enjoyed in an intimate listening session with headphones, on your tricked out home hifi sytem or in the closed confines of your sweet rolling sound system.  Now if y'all will excuse me, I'm going to take the Blueberry out and give all fifteen songs I've featured a spin or two.