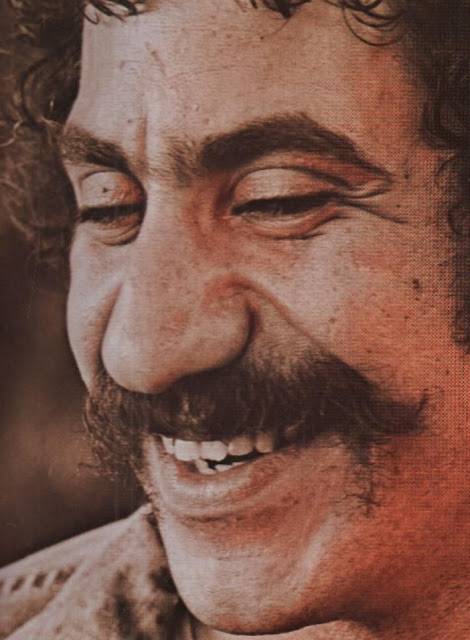 Nearly all of us have had one or more people who were our portals into music and for me that person was my father, HERC SR.  It wasn't intentional, this I know, it just happened - he liked music, played it constantly so I picked it up through osmosis and then I was off and running.  He never discouraged me, Mom says it was always his first inclination to buy me an album for any occasion and so I received lots of good stuff, stuff he knew I'd like.  He never pushed his favorites on me or passed judgement on the stuff I liked.  And as the years passed, the tables turned and I began turning him onto lots of good music, paying him back for all the great musical treasures he had bestowed upon me.  Yet standing here today, surrounding by so much music in various physical forms from 8-track tapes to vinyl, I find myself seeking comfort in the bands and artists and songs I knew he loved.  For today and the next three days, I'll be featuring Dad's favorite greatest hits albums.  It is nearly impossible to listen to any song without thinking of him and that makes him immortal. 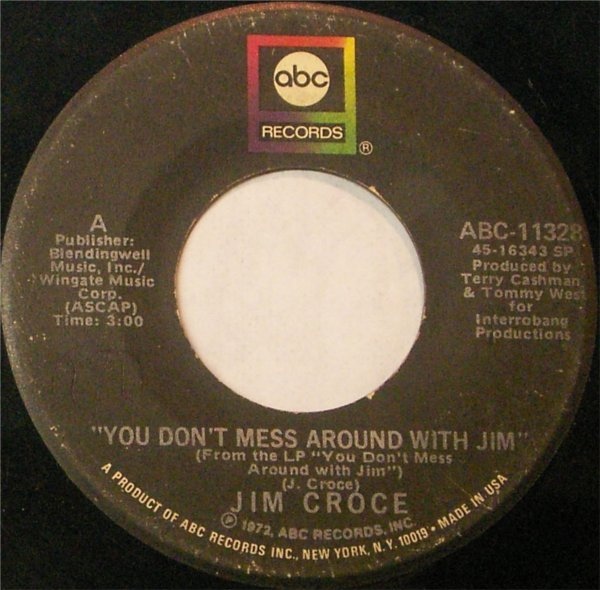 Dad was into Jim Croce from the first time he heard "You Don't Mess Around With Jim" on the radio.  I'm pretty sure I was there in Fort Worth, Texas in the Summer of 1972.  That next weekend, we hunted for the 8-track tape of the album that had that song which turned out to be the name of the album.
Found it pretty quickly and after a quick listen through that weekend, he put the blue tape into the 8-track shelf he had built in his workshop where it stayed for a couple of weeks before I remember him pulling it out for a long trip back to Navasota that Christmas. 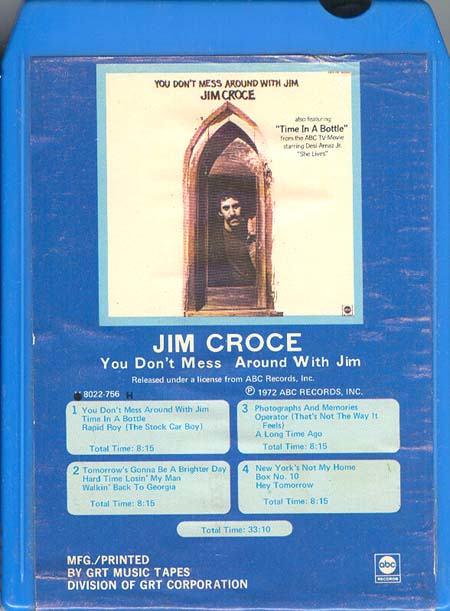 A vinyl copy of the album showed up shortly after from Columbia House and the sound of Jim Croce was heard more frequently around our house.  The second single from the album "Operator (That's Not The Way It Feels)" started getting airplay on the radio later that Summer.  It was a slower song and held little interest to six year old me.
But man oh man "You Don't Mess Around With Jim" was some good stuff and I could swear it was his voice I heard on some of the Schoolhouse Rocks they were showing on Saturday mornings.  Then the following Spring, a new Croce song was heard on American Top 40 and Dad noticed it wasn't on the You Don't Mess Around With Jim album so he went looking for a new album by Croce only to be told there wasn't one so he bought the 45 instead.
The new song "One Less Set Of Footsteps" was somewhere between his first and second singles tempo-wise but it barely registered in my tiny thoughts at the time and I can't remember what the b-side was though Dad always played both sides of a single.  The next single from the album that wasn't out yet would be huge, though.


Dad also had to settle for the 45 of "Bad Bad Leroy Brown" and apparently at least 999,999 other people also settled for the 45 because it was quickly certified a gold seller, topping the charts for a couple of weeks at the end of July 1973.


Dad found the album he had been eagerly awaiting sometime in the Summer of 1973.  If I recall, he bought Life And Times on vinyl because it was cheaper than the 8-track. It was no big deal as he dubbed the album onto a blank 8-track and the songs could accompany him in his 1969 Chevrolet Chevelle SS 396.  I'm pretty sure he also put the You Don't Mess Around With Jim album on that same tape cause both albums were barely half an hour long. 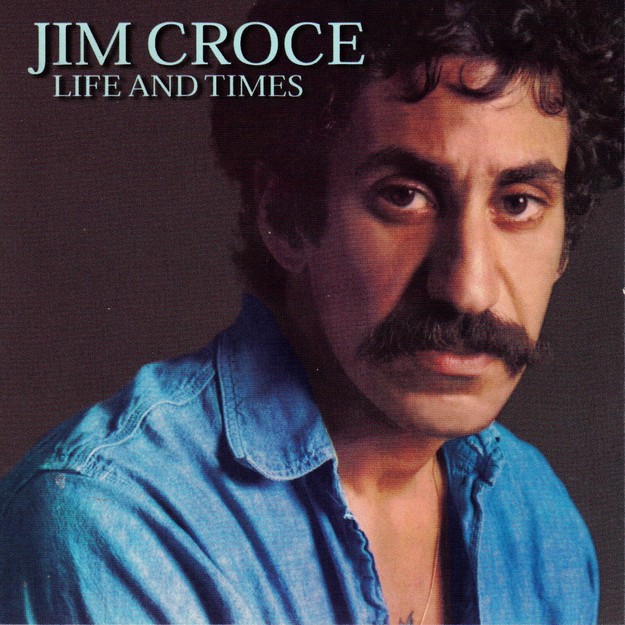 At this point, Croce had become a fairly big star and Dad has two of his 45s and two of his albums and was watching his television appearances whenever he could.  On the day before his next single "I Got A Name" was scheduled to be released, Croce and his guitarist Maury Muehleisen (the other guy in the videos above) played a gig at Northwestern State University in Louisiana.  Afterward, they boarded a small chartered plane with five others (including the pilot) en route to Sherman, Texas for a gig at Austin College the following night.  For reasons unknown, the pilot failed to clear a lone tree at the end of the runway and lost control of the plane and crashed, killing all aboard.  Dad grieved by listening to Croce's music non-stop for about ten days - it was all we ever heard at home and in the car.  I don't recall him ever saying anything about the incident then but when he heard "I Got A Name", he decided to hold off buying the single lest an album was released.  At the time, Croce was but a few years older than my Dad and it may have been the first time since his tours in Vietnam that thoughts of his own mortality bubbled up to the surface.  If he suffered, he did so quietly and to himself with Mom loving and supporting him. 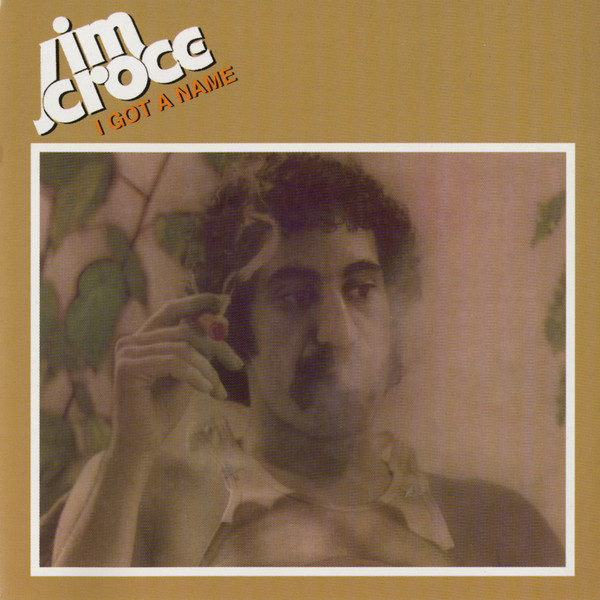 For Christmas 1973, we gifted Dad the I Got A Name album he was waiting for and I am certain that was the first time I saw tears fall down my father's cheek.  He played parts of the album, dropping the needle on each song, to sample it before putting it away though he eventually dubbed it to 8-track for the car.  The animated video for "Bad, Bad Leroy Brown" (below) was done by John David Wilson for The Sonny & Cher Comedy Hour and originally aired on March 6, 1974 as a tribute to Croce.  You may recognize the animation style as Wilson later did the animated opening for the film Grease. 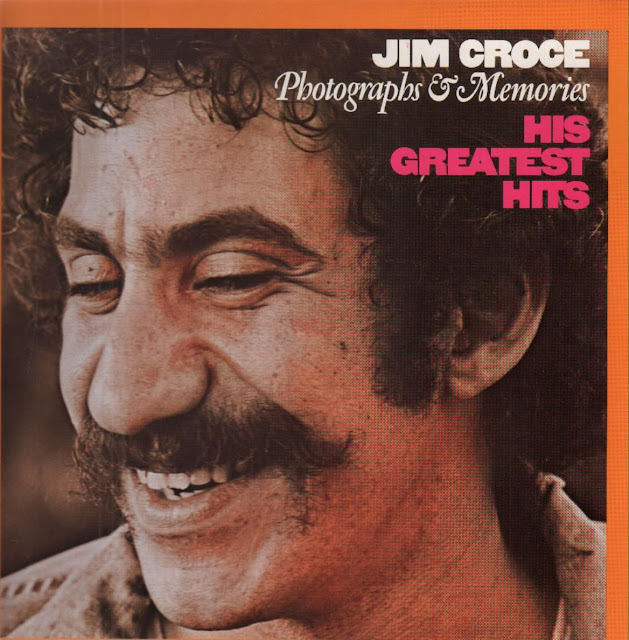 For the following Christmas of 1974, we (Mom, Ang and I) again got Dad a Jim Croce album - Photographs & Memories: His Greatest Hits.  The album contained no new songs, so even though Dad had all the songs on the other three albums, this one allowed him to enjoy his favorites all in one shot though I remember him quietly complaining that a few songs had been left off that he would have included. Croce charted a total of ten singles on the Hot 100 (four of them while he was still alive) with another single missing the chart completely and a twelfth single Bubbling Under at number 110 in 1976.  Photographs & Memories has most of his singles - two hadn't been released yet and "It Doesn't Have To Be That Way" his lowest charting Hot 100 single at number 64 was left off inexplicably.  Still, the album is great Croce fourteen track sampler and though the tracks are in no particular order, neither chronological nor alphabetical, it's still a great listen and rose to number 2 on the Albums chart becoming Croce's fourth consecutive Top 10 album. As recently as 2010, the album was still Top 20 on Top Pop Catalog chart.   Looks we have got ourselves yet another Greatest "Greatest Hits" album.

Turns out Photographs & Memories would be followed by an astounding 52 other compilations, live albums and demo collections worldwide according to Discogs.  My two favorites are The 50th Anniversary Celebration (1992) and 24 Karat Gold In A Bottle (1994): 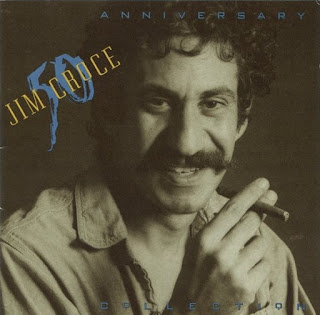 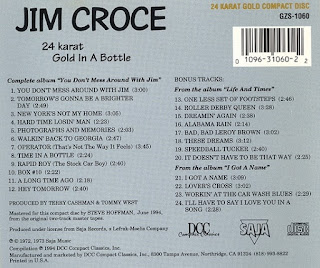 For more on the life and career of Jim Croce, watch his episode of Behind The Music.