Ten Of My Favorite Twelve Inch Singles of 1985

Recently, some dude revealed his 85 favorite singles from 1985 in a series of posts over at the award-winning blog 1976-1985: My Favorite Decade.  Inspired by his epic series, I've come up with a list of my own that somewhat compliments it - Ten of My Favorite Twelve Inch Singles of 1985.  The list is highly subjective though not presented in any sort of preference and is limited to releases currently in my collection, either on vinyl or CD. 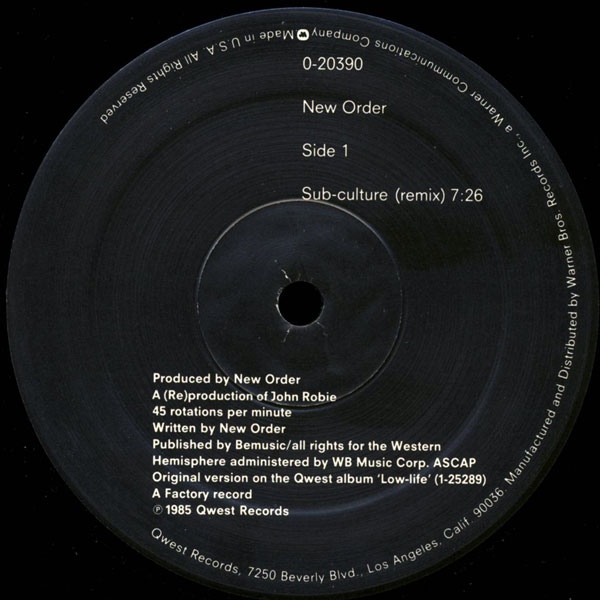 John Robie's extensive reworking of New Order's "Sub-culture" from the album Low-Life including added percussion and newly recorded vocals.  The Remix is beefier, sturdier and yet more danceable.  I've listened to this remix so much that the regular album version sounds flat and lifeless to me now. 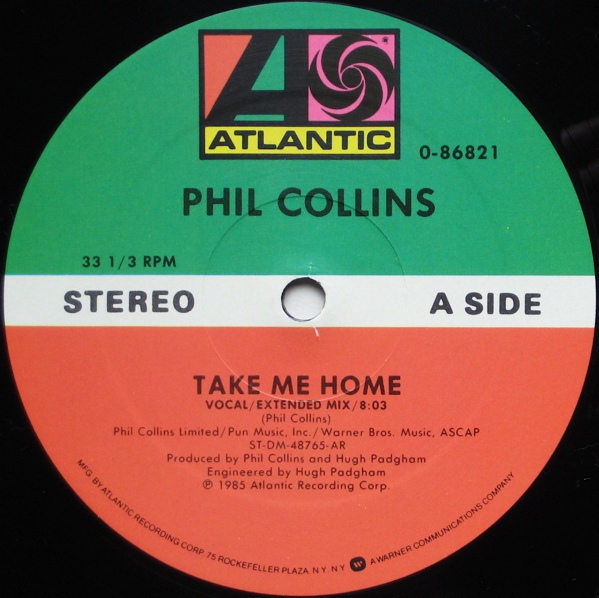 My apathy towards Phil Collins and his massively popular third album No Jacket Required is well-documented though when I finally caved and bought a copy after every other human with at least one functioning ear had already done so, it was after hearing this Extended Mix of "Take Me Home" and naively thinking it was included on the album in this mellowed-out mix which of course it isn't so Phil won after all. Then I found this twelve inch single and all was right again. 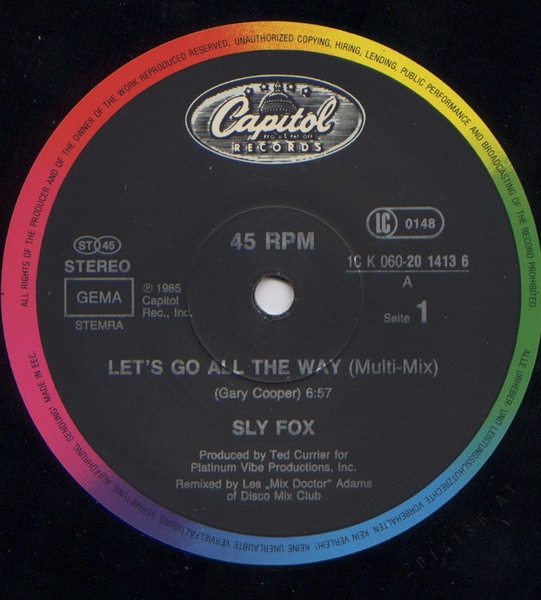 Heard this one on a Friday or Saturday radio mix show, a playful pastiche of the title song and its rhythm track doppelganger "A Fly Girl" by the Boogie Boys with a bit of Queen's "We Will Rock You" scratched in and layered on top.
DMC's Les Adams deserves full credit for his work though the song also later appeared on a rival remix service called PowerHouse Club Classics without proper credit to Adams. Still can't believe this mulit-genre, format crossing Multi-Mix (not to be confused with the Extended Blix Mix) didn't get more airplay.  Maybe because it was only available as a relative pricey import. 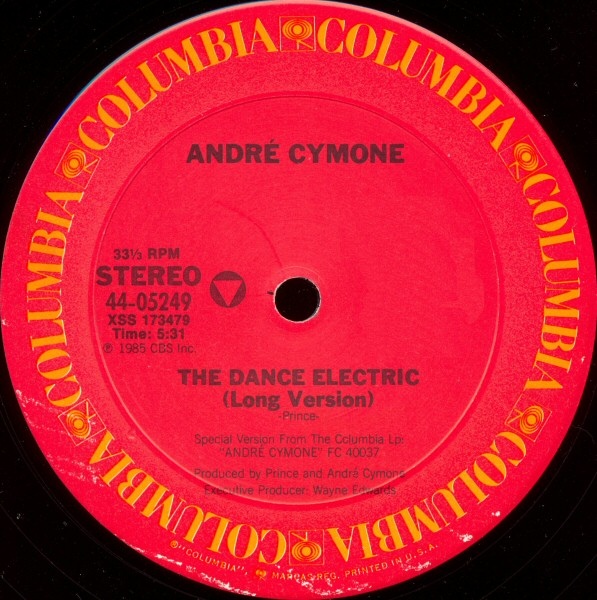 This is one of those purchases I later came to regret as it was basically pointless - a twelve inch single that merely offered the album version of a song.  Still, it came out a month before the album did so I had no way of knowing beforehand plus it plainly said Long Version on the tin.  It also says produced by Prince on the back cover and Prince never ever used his own name on outside projects.  And it turns out Prince also wrote the had-hitting funk workout.  The cosmic score was settled a bit when a two disc special edition of the album AC was released in 2014 that featured the previously unreleased 10:24 Extended Version of "The Dance Electric", which appears to be Prince's original instrumental backing track as it lacks Cymone's vocals.  Wendy & Lisa can be heard on backing vocals. 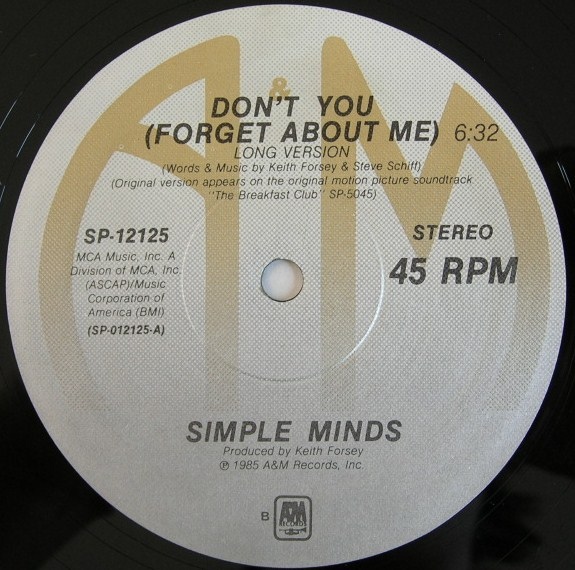 It is well-known that Simple Minds never wanted to record "Don't You (Forget About Me)" in the first place and they regretted it at first when it went on to become their biggest hit. (However, to secure more favorable royalty rates they re-recorded the song and released it in the digital realm in 2015.)  The Long Version (which I feel is also mixed with more dynamic range than the album/single version) features a longer drum intro in addition to lengthier breakdowns and drum fills throughout, a noticeable second appearance of the bridge and a slightly longer ending than the more popular version included on the soundtrack album for The Breakfast Club. 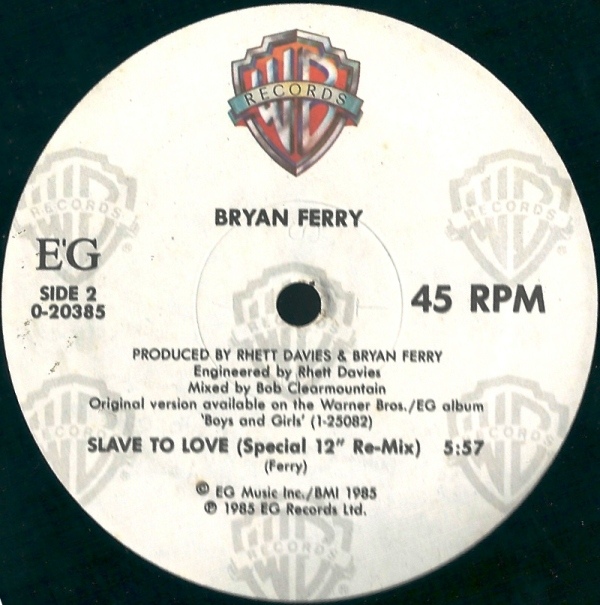 The Special 12" Re-Mix of Bryan Ferry's "Slave To Love" begins with a thunderclap before giving way to the sparse rhythm that carries the tune while Pink Floyd's own David Gilmour weaves his guitar in and out of the mix.  Rather than a radical rebuilding of the track, Bob Clearmountain seems to have enhanced the inherent moody romance of the original track with a few sound effects and some subtle EQ work. Here in the U.S., the Re-Mix was buried on Side 2 of the twelve inch single for "Don't Stop The Dance", the second single from the album Boys and Girls. 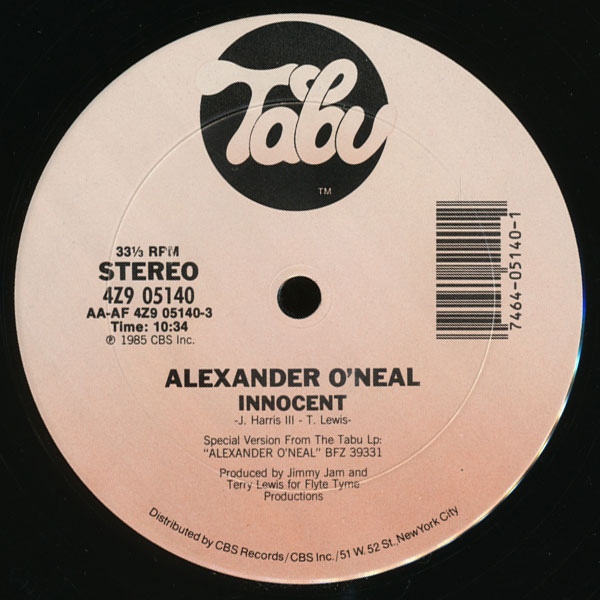 I remember reading Robert Christgau's review of Alexander's self-titled album thirty years ago and snickering to myself how he called producers Jam & Lewis and the other guys in their band Timexes because they used to be in The Time. The twelve inch of "Innocent" says it is a Special Version and it was released ahead of the album but it is basically the album track listed as "Medley: Innocent/Alex 9000 / Innocent II" so once again, an innocent record buyer was duped.  Still love the track, though.  No direct Prince involvement but it just has his vibe. 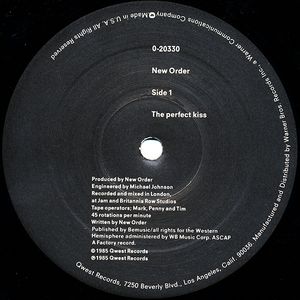 Listed variously as either the Original Version or the 12" Version, the twelve inch single of New Order's "The Perfect Kiss" is essentially the full length recording of the song rather than the truncated versions heard on the album or 45.  The song itself is of a non-traditional structure and offers remix-like portions including sound effects - listen for frogs and sheep. 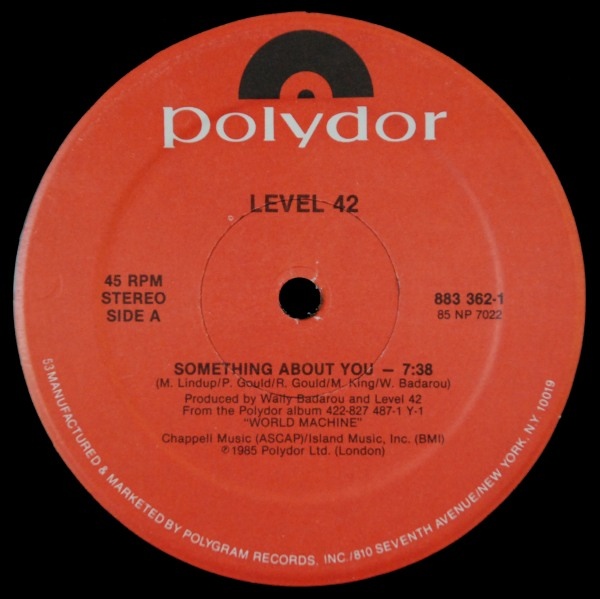 One of the most prolific and instantly recognizable remixers of the Eighties was Shep Pettibone.  In addition to his signature work with New Order and Pet Shop Boys, his remix of Level 42's "Something About You" is among my all-time favorites.  The broken down extended intros, the stuttering and hiccuping rhythm breaks are classic Pettibone touches.  I had always wondered what happened to the guy after his name started appearing less and less frequently on remixes but there was never any news.  Fortunately, he gave his first interview in nearly twenty years to Billboard in May 2015 in honor of the 25th anniversary of Madonna's "Vogue", which Pettibone co-wrote and produced, reaching the top of the charts. 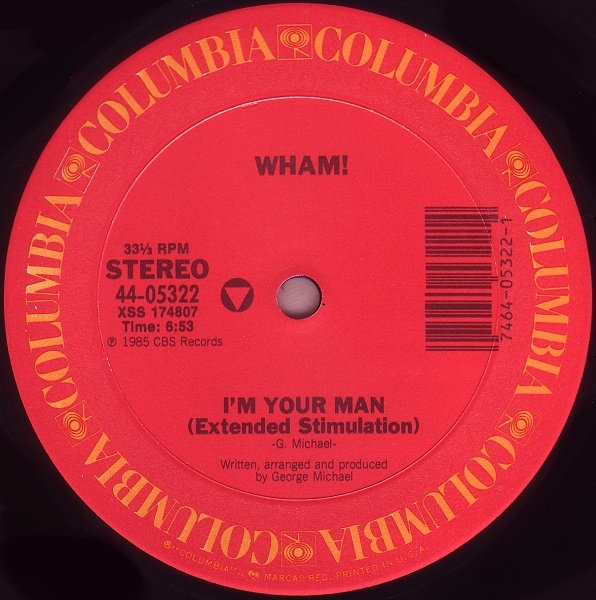 Many fans confess to loving Wham! as a guilty pleasure.  My love and adoration for the musical works of George Michael have always been unashamedly public and healthfully guiltless.  This sexy throwback track with the baiting call and response lines and soaring chorus was given a busy new gimmicky intro for the Extended Simulation but the unbridled propulsive groove remains.  The nearly unrecognizable "I'm Your Man '96" is not worth anyones time - in live performances, Michael has been known to begin "I'm Your Man" with the '96 intro before stopping, apologizing and starting over with the original version.  (The Spotify link plays the US album version of "I'm Your Man" which is slightly edited down from the Extended Simulation twelve inch single.)