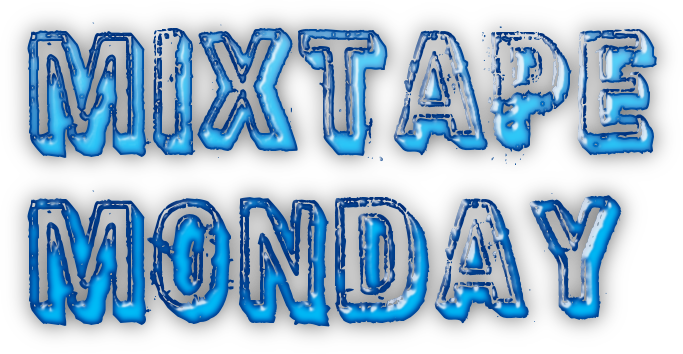 TGIF=M
The Hideaway has always been HERC's main web hang but loyal viewers know one property on the interwebtube Monopoly board ain't enough for ol' HERC, oh no.  Some of y'all are kind enough to tune in every other Monday as he rates the K-tel albums of his youth using the K-Tel Scale™ on The K-Tel Kollection.  And a very small, obviously highly intelligent and surprisingly fiercely loyal group of viewers have been following along as HERC has shared his 1985 vinyl buying journal on 1985: A Vinyl Odyssey, which will be coming to an end after he posts the final entry - Day 97 - later this month.  HERC mentions his other blogs because a sort of synchronicity has been discovered between HERC's Mixtape Monday feature here on The Hideaway and his posts of vinyl acquisitions over on 1985: AVO.  This is cool on several levels but what HERC appreciates the most is the way the data helps narrow down the range of dates that he created the tapes.  Here are a few examples:

After the weirdness of mixtape "L", HERC returned to his previously established pattern of recording his recent purchases for the girl of his dreams, the kitten he was smitten with aka the future MRS. HERC, with mixtape "M".  Long story short: he fell in love with her gorgeous brown eyes and Latin curves upon first sight in 1983, they dated off and (mostly) on from 1984-1986 (when he began making these mixtapes for her) and they wed in 1987. 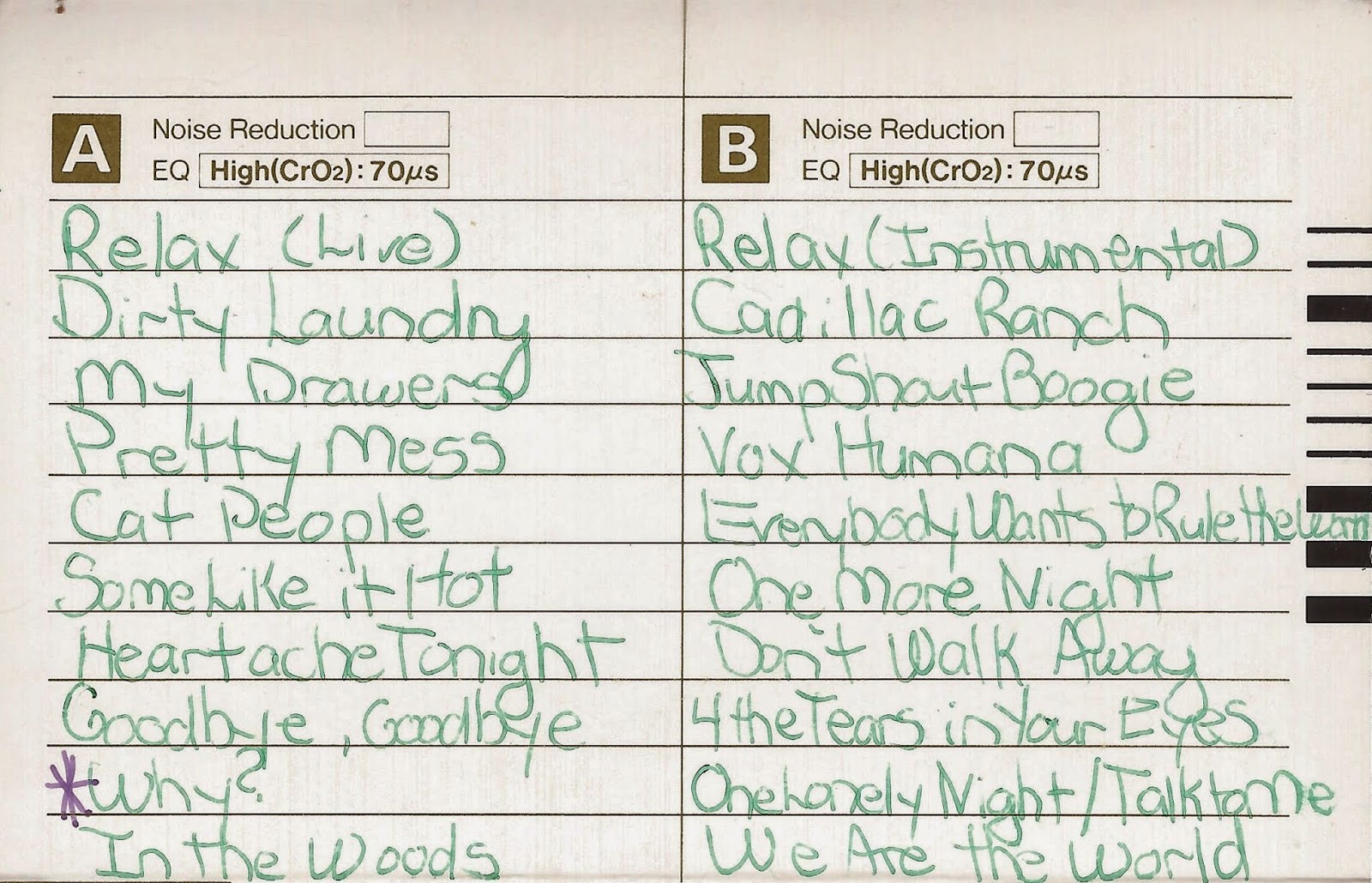 As HERC noted above, mixtape "M" features eight tracks from eight records he welcomed into his collection on April 6th.  Purchases from four different days in March filled in most of the rest of the playlist.  Based on those dates, HERC feels confident in stating for the record that mixtape "M" was dubbed after the first week of April 1985.  A Side opener, the extra-throbbing LIVE version of "Relax", was taken from the "Welcome To The Pleasuredome" US 12" single while the instrumental version of the same song that opened Side B was lifted from the "Relax" US 12" single.  HERC chose to include both versions of the song because he had just picked up tickets for the June 12th Frankie Goes To Hollywood concert that morning.  It was Saturday, April 13th 1985. He distinctly remembers making this tape that night. 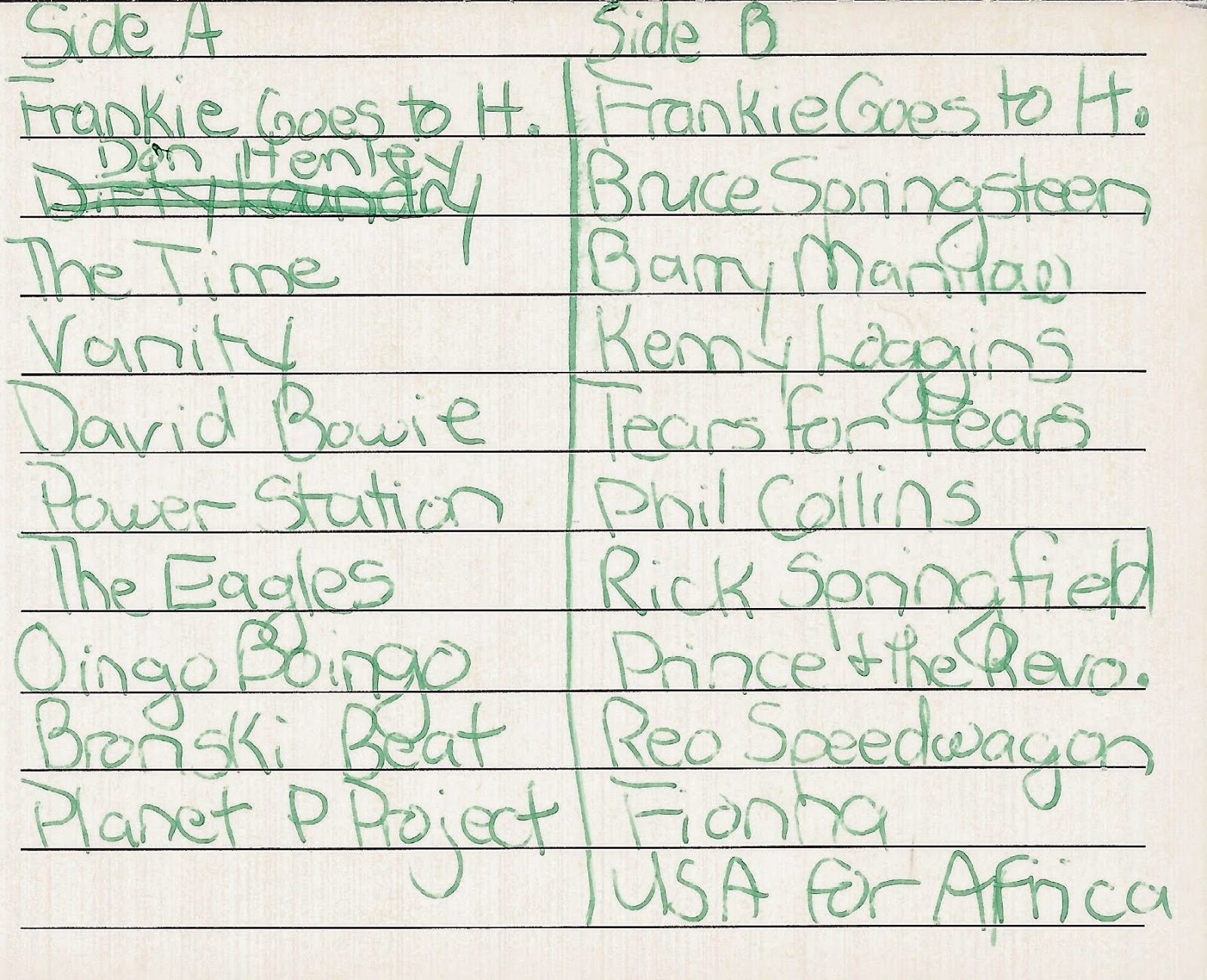 This is a really good listen, one of the few tapes we've played twice recently.  (Well, the Spotify playlist was played twice as the tape case for mixtape "M" is empty.)  Some oddities appear on mixtape "M" as well, including:

Which brings up the perfect time to answer a question:
Viewer JayME Starr wants to know "if HERC is such a huge Prince fan, why isn't he including more of the Purple One's songs on these mixtapes?  The guy was red hot at the time."

Well, JayME, here's your answer:
One of HERC's first formal dates with the woman who would become Mrs. HERC was to see the movie Purple Rain on its opening day: Friday, July 27th, 1984.  (It must have been their second or third date.)  Over the following week at the restaurant where they worked together, HERC gifted her with six cassettes, dubs of all six of Prince's albums (on four TDK SA 90s) up to that point, including all three albums by The Time on one TDK D 120 minute cassette as well as the Vanity 6 and Apollonia 6 albums back to back on a TDK SA90.  Because HERC gave her all of Prince's music in such concentrated form, he generally refrained from including Prince music on the alphabetical mixtapes although there were a few exceptions.  He kept records of all the mixtapes he made to avoid duplicating tracks but sometimes certain tracks did show up more than once.  (Like on today's tape, he is pretty sure that both "My Drawers" and "Dirty Laundry" have appeared before.  There may be more repeats.)  It should be noted that Mrs. HERC's favorite color has always been purple so she was somewhat easy to convert into a fan of Prince's music.