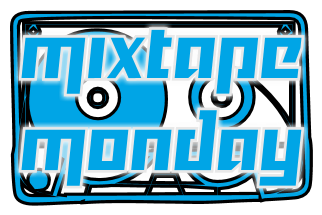 For HERC, the mixtapes he made were a way of showing off his record collection in a relatively quiet and understated manner.  To this end, he rarely labeled them in any way, increasing the mystery.  In the mid-Eighties, he often made one of a kinds for friends and co-workers; when they or someone else would ask for a copy of a tape, HERC would politely refuse.  If someone threatened to dub off their own copy of one of HERC's tapes, they were warned that the tape was indeed undubbale and could quite possibly irreparably damage their stereo equipment.  (This was but one of the advantages of being a smartass working amongst mostly dropouts and burnouts in the fast-food industry.) And when one of those co-workers, who was neither a dropout nor a burnout, made the illogical leap from being his very best friend to his girlfriend, HERC celebrated their new union by making her a mixtape every week they were together.

And while anyone with half a brain would have titled their mixtapes or even simply numbered them, HERC chose to letter them.  When he completed the alphabet, he started over again, doubling and repeating the letters: AA, BB, etc. After the 52nd tape, HERC began tripling and repeating the letters: AAA, BBB, etc.  HERC cannot remember how far that series lasted but the last lettered tape currently in his possession is FFF.  In fact, after five moves, roommates too numerous to count as well as sticky-fingered, musically ravenous brothers & a sister, the recipient of the mixtapes brought only forty of the original cassettes back into HERC's life when she agreed to be his wife in 1987.  On today's very special episode of Mixtape Monday, we start with the first of those legendary tapes, the one lettered A.  (Actually, HERC never labeled a single one of the tapes - the woman who would become MRS. HERC did, so it will be her delicate handwriting we shall be viewing.) 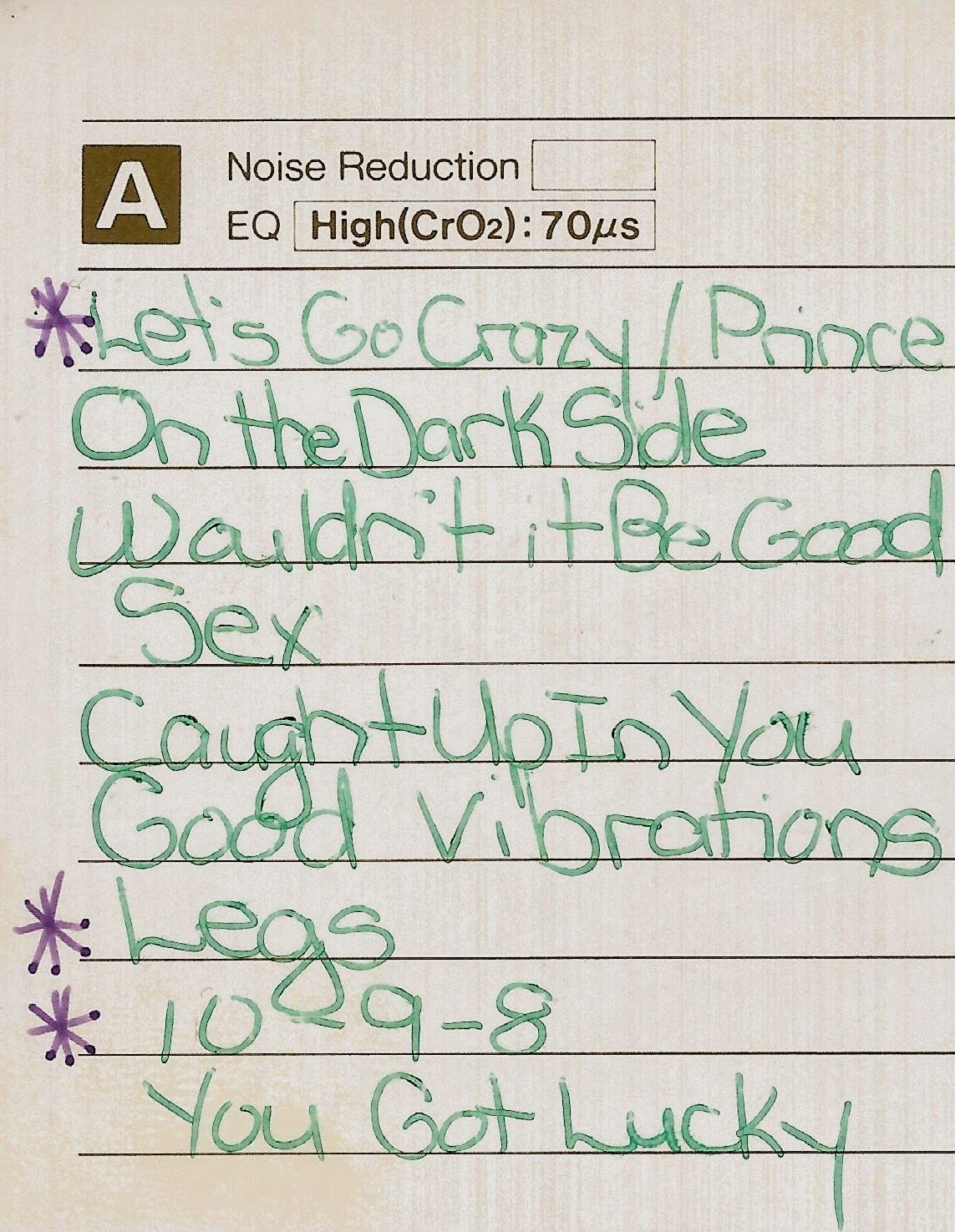 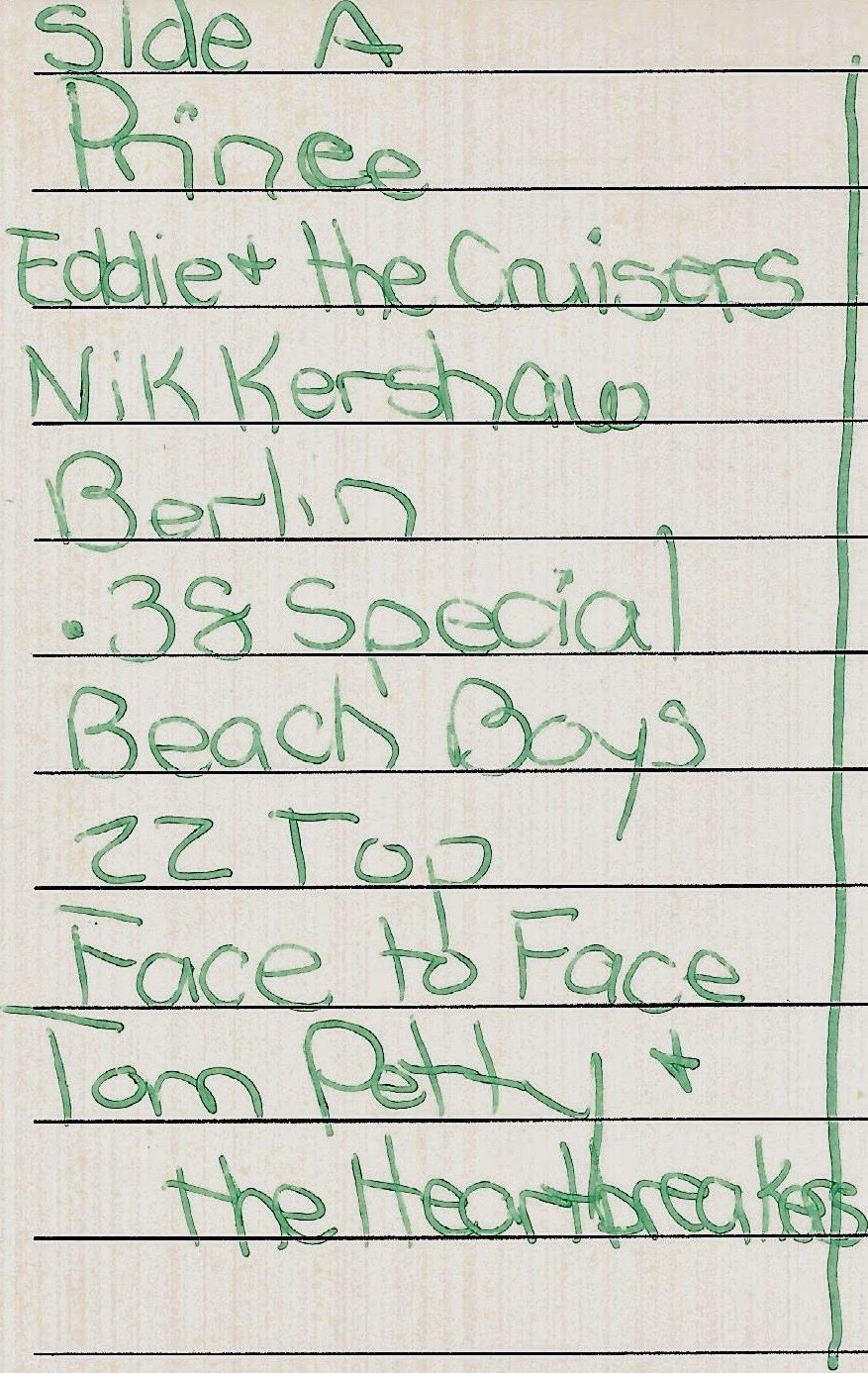 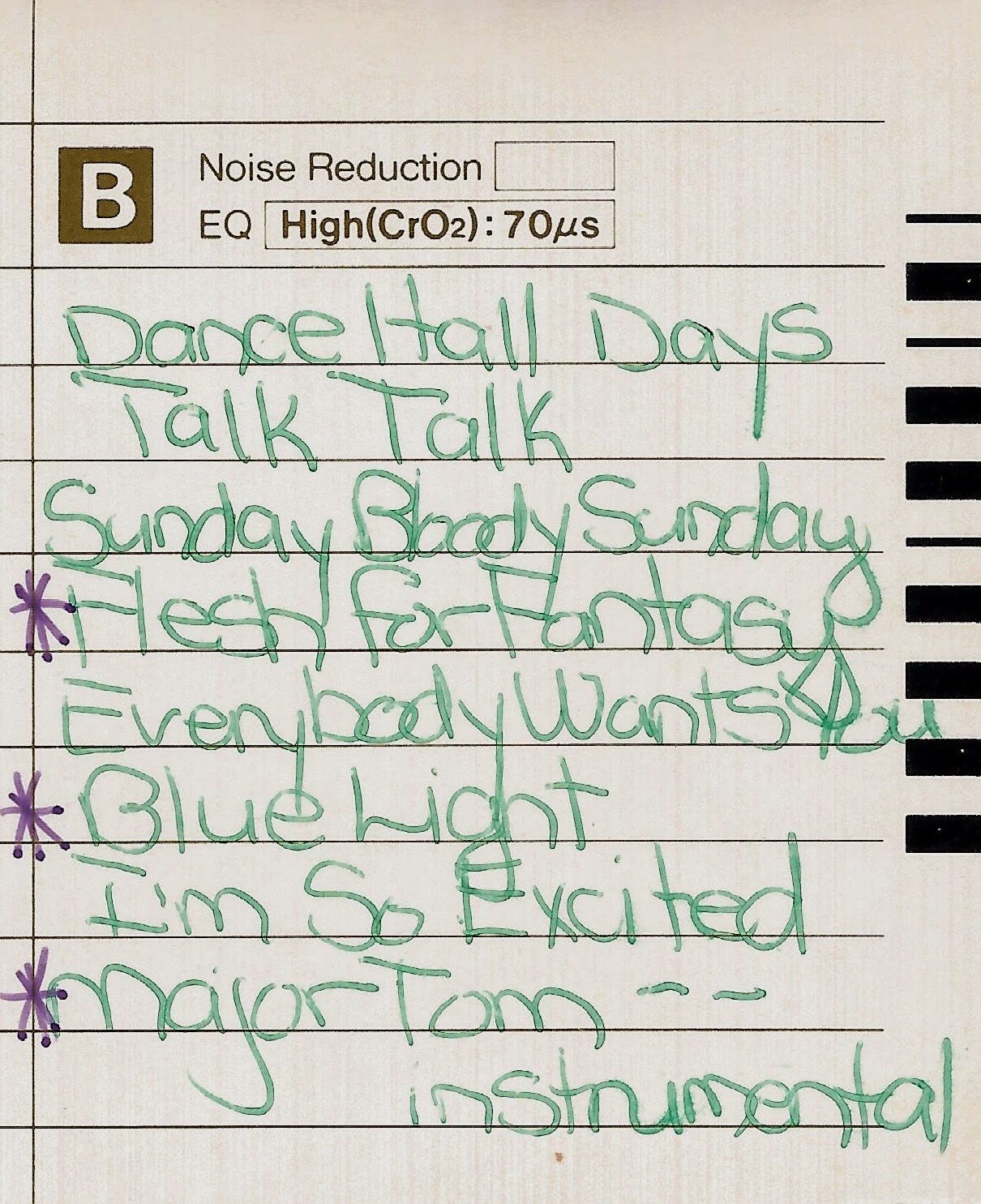 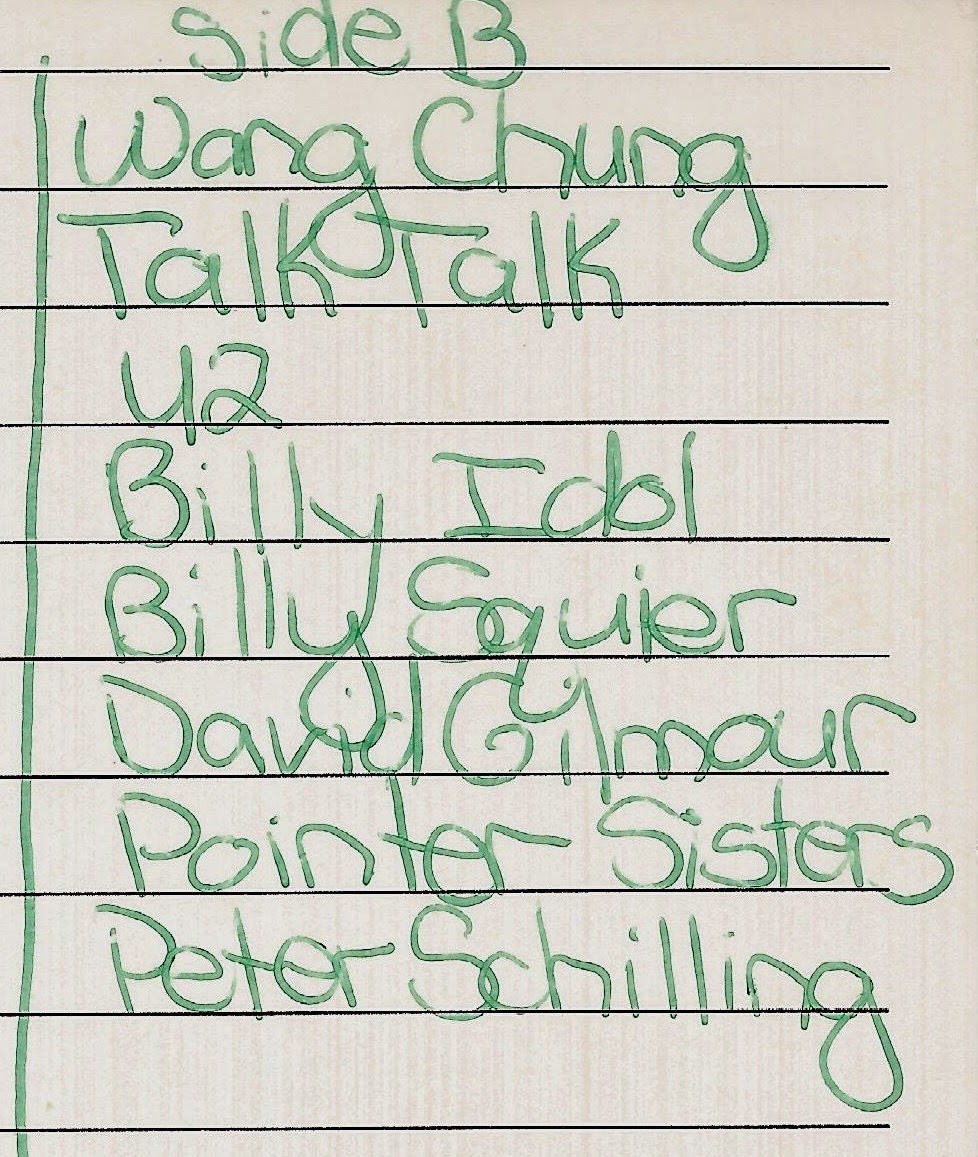 Side A pretty much laid out HERC's agenda - No decoder ring needed for his not so secret message.  It's a miracle the girl didn't dump him after just one listen.  With the exception of track 4, HERC had been paying attention to when she said she liked certain songs on the radio, so all the songs were known favorites of hers. HERC's best guess as to month and year of this mix is late June/early July 1984 as that is when their relationship blossomed. 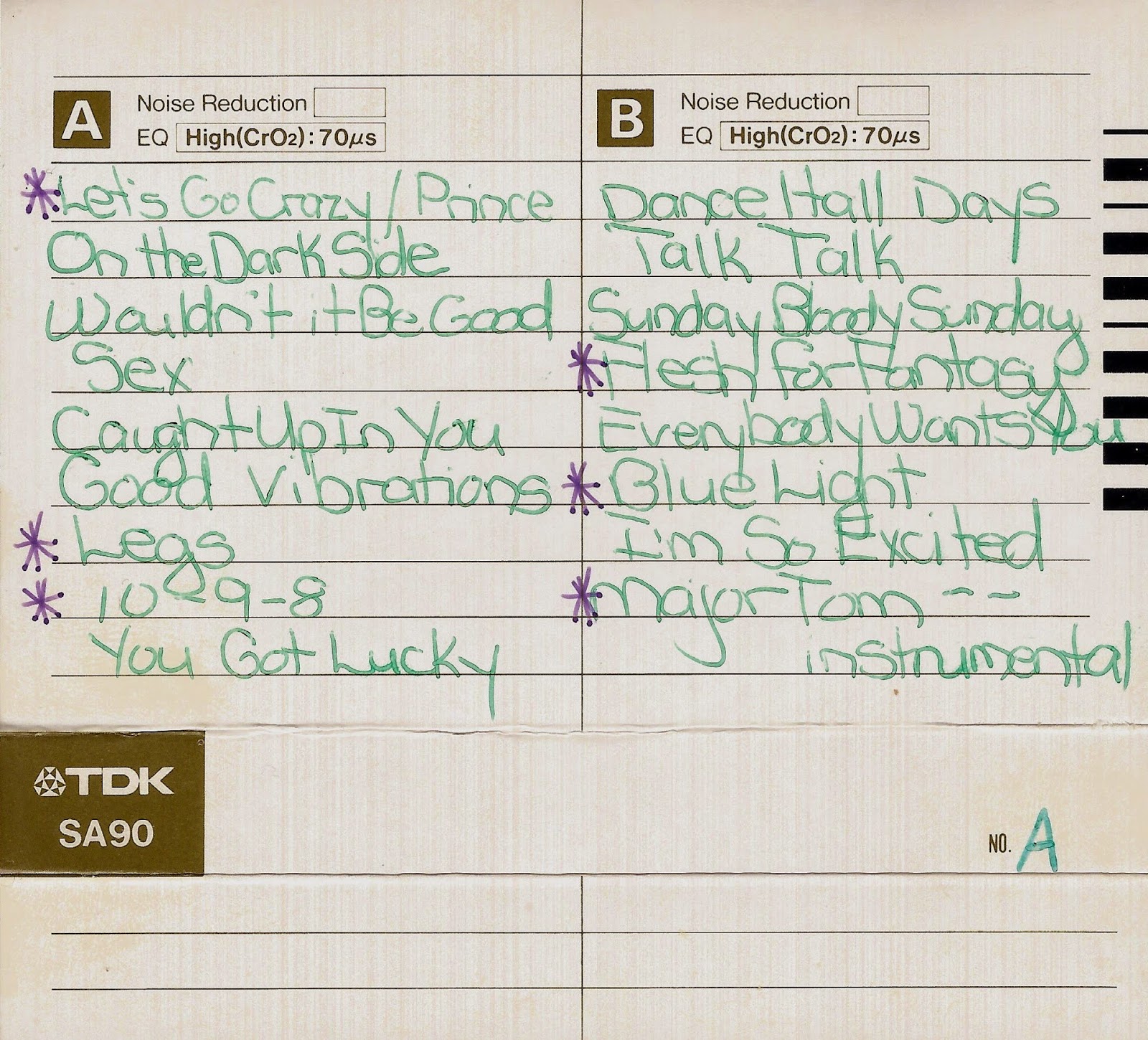 Interesting to note that she opted to list song titles on front of the j-card and artists on the back.  And if you're wondering what those purple splats represent, HERC was right there with you until he listened to the tape and it became clear: those splats represent remixes or extended versions.  (she somehow missed the remix version of "Dance Hall Days" that kicked off Side B.)  So the young lady received an unmarked tape, then listened to it and at some point decided to write down the songs and artists she heard on the tape, even discerning remixes and extended versions.  Is it any wonder HERC felt compelled to marry her? 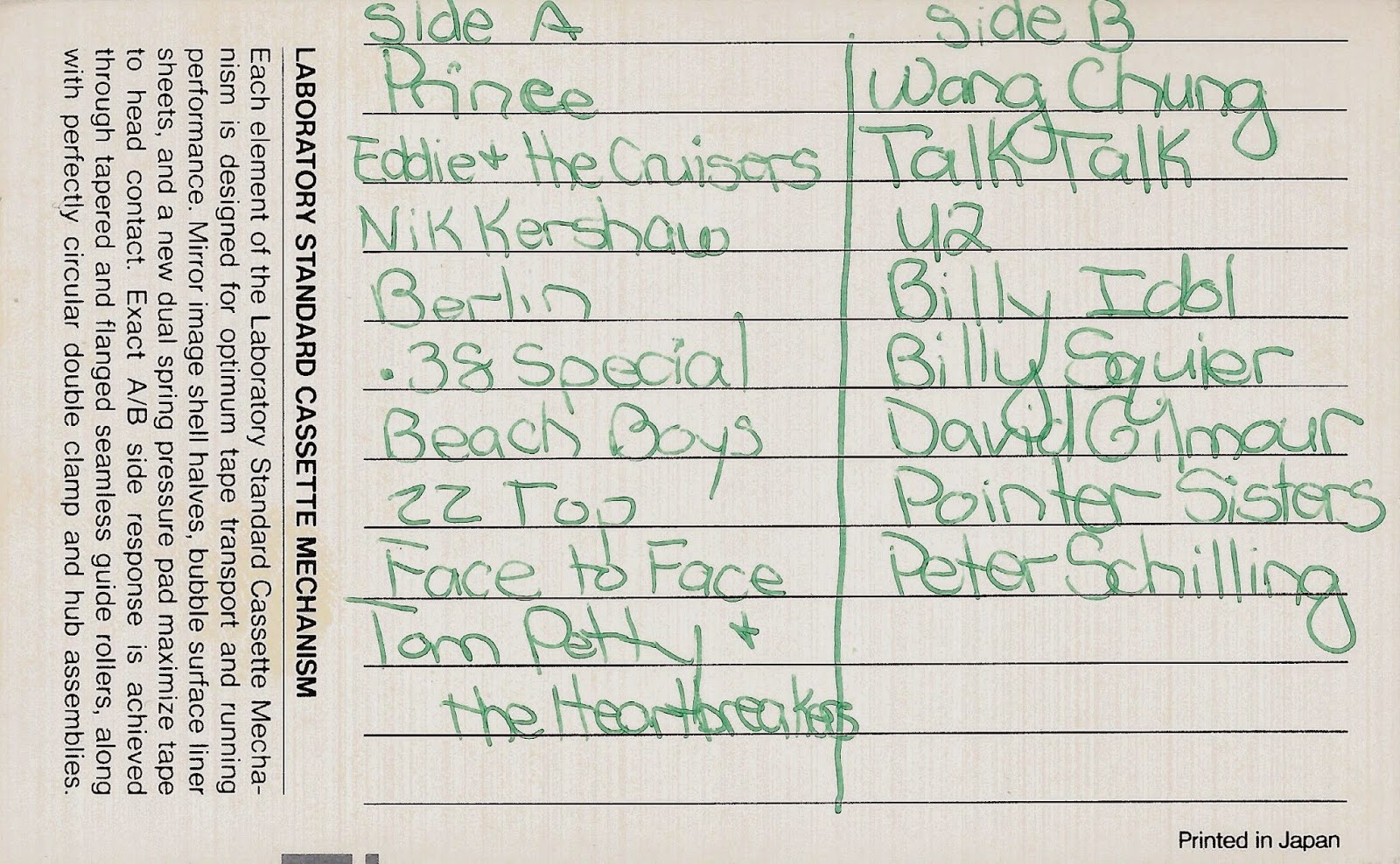