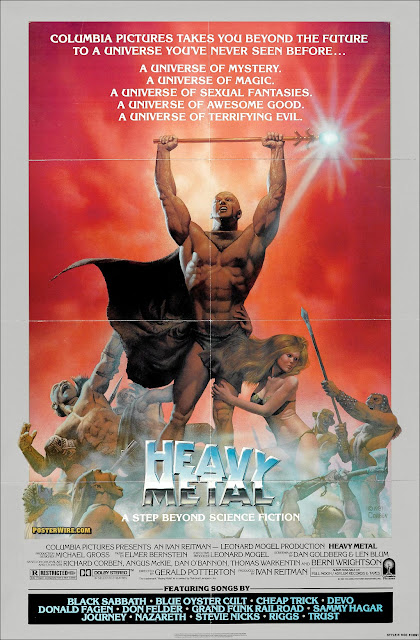 HERC was once a 14 year old boy.  He mentions this only because it's a closely-guarded secret in the smoke-filled Hollywood movie studio backrooms and boardrooms that 99.9% of the movies they produce are aimed squarely at hormone crazed 14 year old boys.  Around the time HERC was a 14 year old boy, the film HEAVY METAL was released.  Filled with animated sex and violence earning it a R(estricted) rating, the film was a mythical must see for young HERC until he somehow persuaded his Mother to take him to a screening at the local Air Force Base theater.  The exchange went something like this:

HERC: "I though it could be just you and I."

HERC's Mom: "Well, okay.  That would be nice" while holding back tears.

If you have never attended a movie on a military installation, you stand for the National Anthem, which unlike sporting events, is accompanied by a video depicting beautiful scenery and patriotic images.  Or at least it was 30 years ago when HERC last attended one.  Even the Saturday morning kids matinees, where parents (like those of HERC and his sister) dropped their kids off with a dollar for a ticket and a dollar for a treat, featured the National Anthem and HERC remembers almost every kid honoring their country by standing and listening quietly without adult supervision.  Amazing.

To her credit, HERC's Mom was a good sport and said nothing during the movie as scene after scene of cartoon carnage, both violent and sexual, unfolded on the big screen.  She might have said something like "I like Bugs Bunny cartoons better" after the movie on the relatively quiet drive home but HERC doesn't really remember anything other than what he had just witnessed with his own Mother, the woman who had brought him into this world, by his side.

In keeping with the family friendly nature of this site, HERC cannot divulge particular plot points or much detail from the movie.  Although it features the voice talents of John Candy, Harold Ramis, Joe Flaherty and Eugene Levy, HERC cannot recommend HEAVY METAL but he likes it and it's out there on VHS, laserdisc, DVD and blu-ray if you want to view it for yourself.  The poster's taglines tell it all: 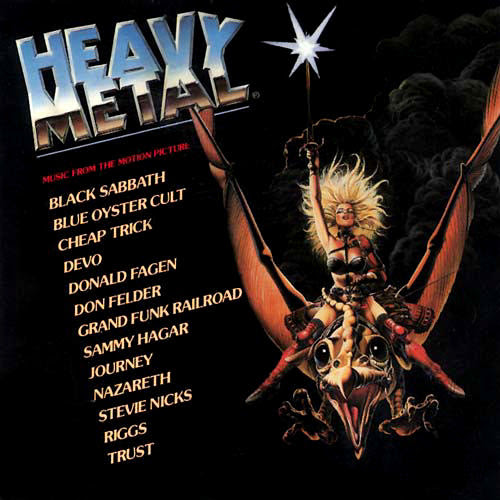 Which brings us to the reason we're huddled here in the Hideaway on yet another Film Fest Friday: the glorious soundtrack to the motion picture HEAVY METAL which features all the artists listed right there on the front cover.  It was the second double disc soundtrack album on Irving Azoff's Full Moon label following Urban Cowboy in 1980.  Featuring sixteen tracks spread out over four sides, the soundtrack easily fit on compact disc when it was belatedly released on the digital medium in 1995, after years of legal rights wrangling. (The following year, the movie was finally released on home video.)  It was also available on cassette and 8 track back in 1981.  After buying the vinyl album in the Summer of 1981, HERC ended up buying the cassette later in 1982 for a Summer trip to visit his grandparents in Texas.  He also bought Long Distance Voyager by The Moody Blues, REO Speedwagon's A Decade Of Hits: 1970-1980 and the Fast Times At Ridgemont High soundtrack (another Azoff Full Moon soundtrack) that Summer.  After repeated playings in his trusty Walkman, all four albums became indelibly etched in HERC's musical memories. 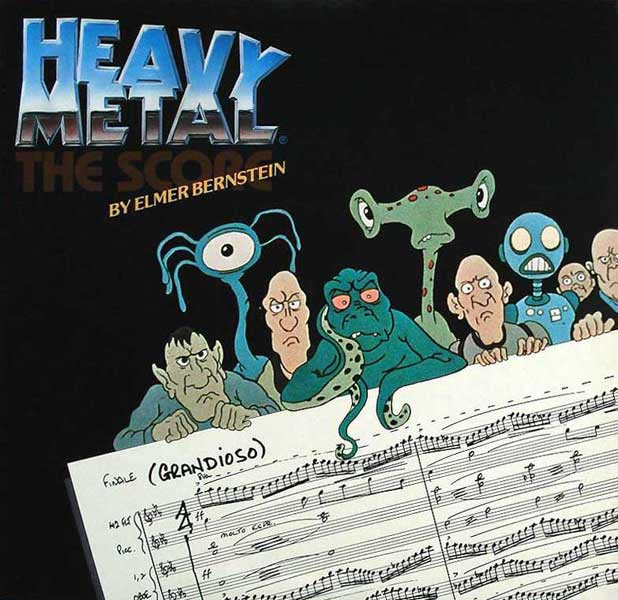 In an unusual move for soundtrack albums of the time, a second album was released simultaneously featuring the original orchestral score by Elmer Bernstein.  Originally a vinyl only release, the score wasn't settled issued on compact disc until 2008.  The little devils over at Inferno Music Vault put the two together and created their exclusive Extended Soundtrack last year combining the songs from the soundtrack with Bernstein's score.  The movie got the South Park treatment as well - click here to watch!  The video is NSFW.

Five singles were released from the HEAVY METAL soundtrack album, which peaked at #12 on the Top 200 Album chart: 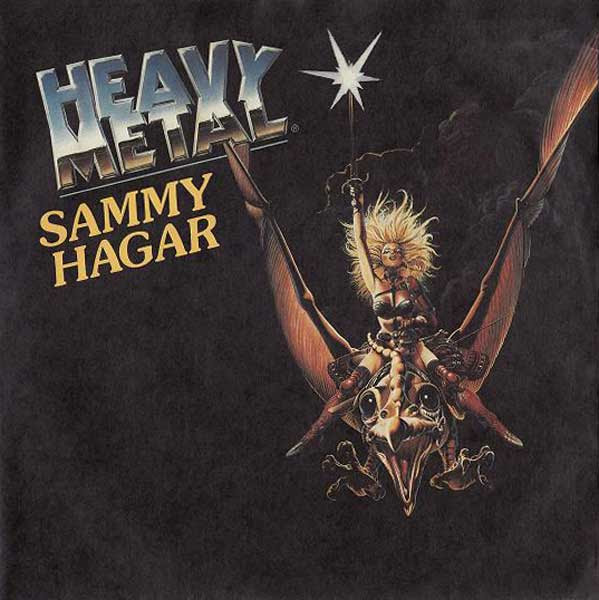 Sammy Hagar's title track which he also included in a slightly different version on his own Standing Hampton album; 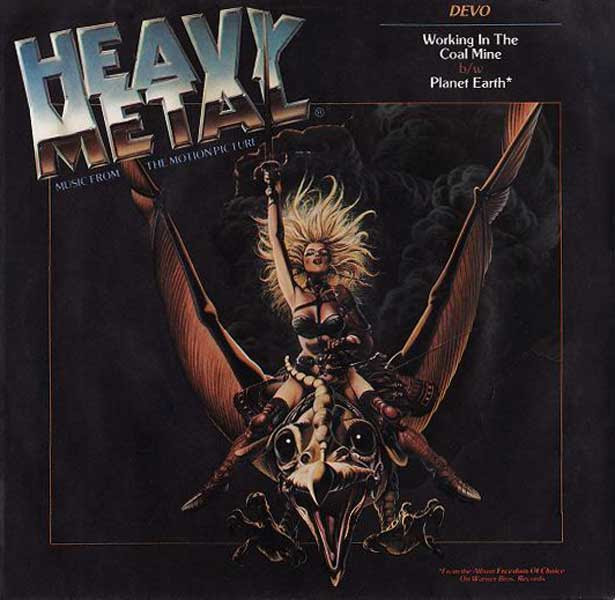 Devo's cover of "Working In The Coal Mine" which was also included as a bonus single with their New Traditionalists album; 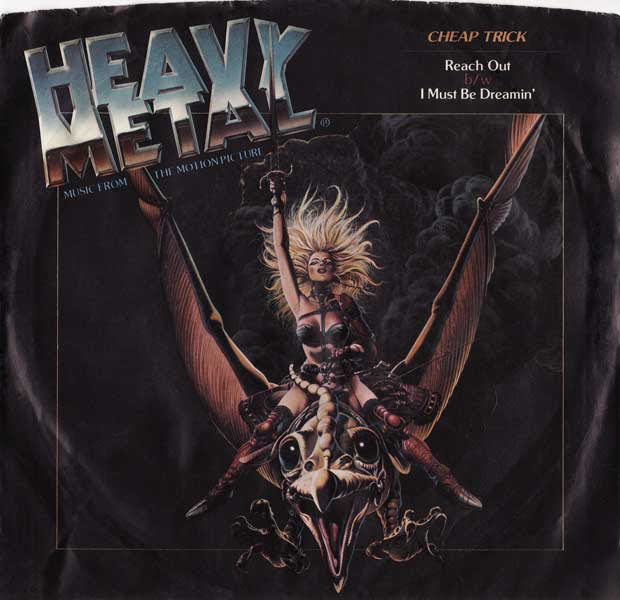 Two tracks from Cheap Trick were included on the soundtrack and both can be found on this single with HERC's favorite being the designated b-side, the multi-tempo, multi-part "I Must Be Dreaming" seen and heard below in rare tour rehearsal footage from 1980: 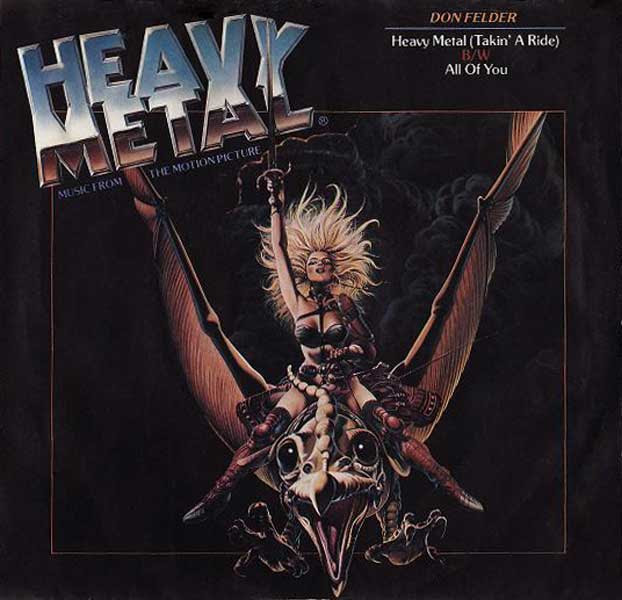 Don Felder was also represented on the soundtrack with two tracks and both were released as one single, as had been done with the Cheap Trick cuts.  HERC's favorite Felder track is "Heavy Metal (Takin' A Ride)" which managed to make it into the top half of the Hot 100.  It featured backing vocals by his fellow Eagles Timothy B. Schmit and Don Henley.  It is a great late night drivin' song and HERC often cues it up with Fleetwood Mac's "Tango In The Night" and Pink Floyd's "Comfortably Numb" for a fifteen minute block of bliss;

Felder's "All Of You" was also the b-side to the fifth single from HEAVY METAL with the A-side being Donald Fagen's "True Companion".  None of these songs would be mistaken as songs in the genre known as "heavy metal".  The soundtrack actually features quite a few mellow songs and jazzy ballads.  The highest charting song included on the album was Journey's "Open Arms", which was released as the fourth single from their almost 10,000,000 selling album Escape.  Blue Öyster Cult actually recorded several songs for possible inclusion on HEAVY METAL's soundtrack but in the end only one made the list.  The other songs were released on the band's 1981 album, Fire Of Unknown Origin.