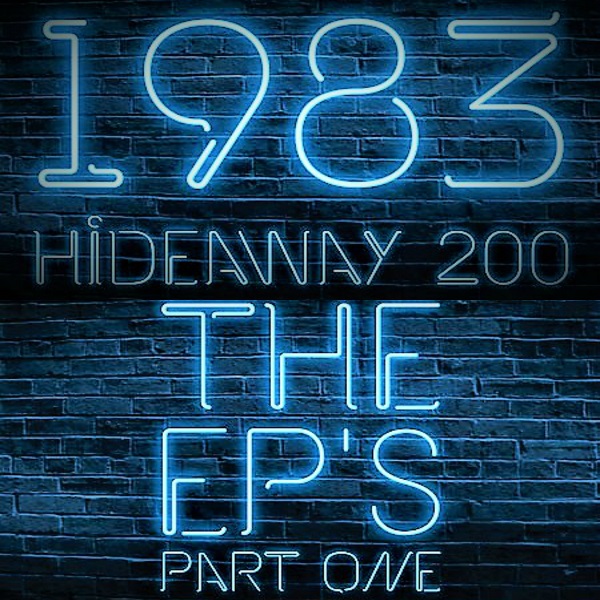 Hello and welcome to 2018. We have a lot planned for The Hideaway this year and for our first major undertaking of the year, we're revisiting the music of 1983. While 1982 and the nine years that preceded it will always be our favorite decade in music, the music of 1983 is absolutely wonderful. We begin our journey into the music from 1983 with five of our favorite extended plays (EP) or mini-albums from 1983:
#5
Fascination! 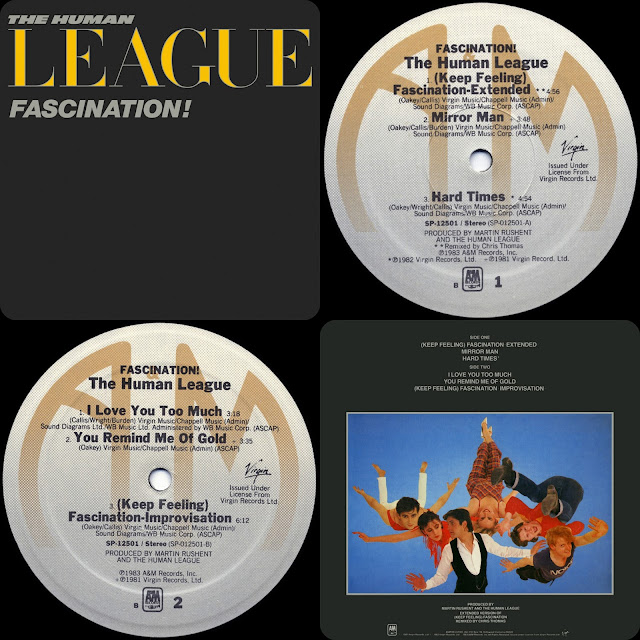 After "Don't You Want Me", Dare and The League Unlimited Orchestra, I was deep into The Human League so when the Fascination EP hit stores, I was all over it. I don't recall hearing either of the record's two singles - "(Keep Feeling) Fascination" and "Mirror Man" - before picking up the EP so my hopes were high until after about 48 seconds into the former song, which opened Side 1, and that annoying fake horns synth riff started. Then the singing started and it was downhill from there. "Mirror Man" was better; it could have been a leftover from the Dare sessions. I love "Hard Times" and think "(Keep Feeling) Fascination-Improvisation" is a vast improvement over the Extended version of the song as the bass line helps drown out that synth-horn riff which I find still find so very annoying nearly 35 years down the road. If it wasn't for the repeated listenings of "Hard Times" and the Improvisation version of the title track, Fascination! would not be here on the list. (I know I'm in the minority on this one so tell me how much you love it in the Comments.)
#4
Fervor 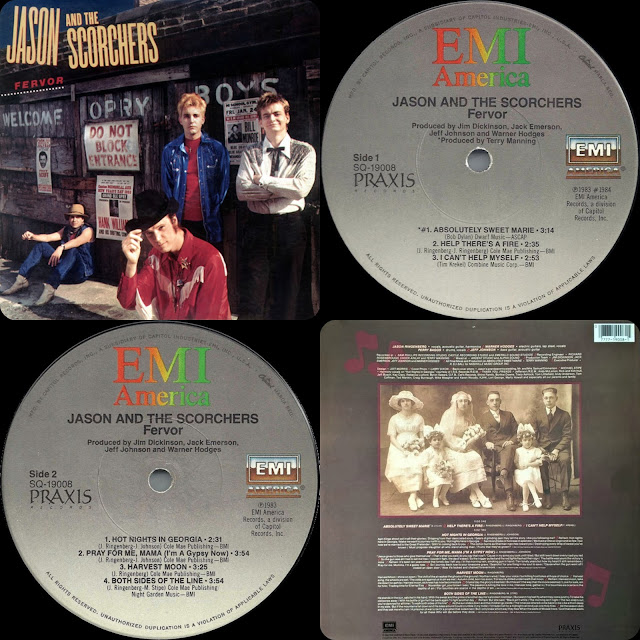 It was "White Lies" playing in Wherehouse Records one Sunday night in April 1985 that made me a fan of vocalist Jason Ringenberg, guitarist Warner Hodges, and their tight rhythm section. I took home their album Lost & Found that night and within six months I had found the Fervor EP from 1983 in the bins at PDQ.
#3
ExtendedancEPlay 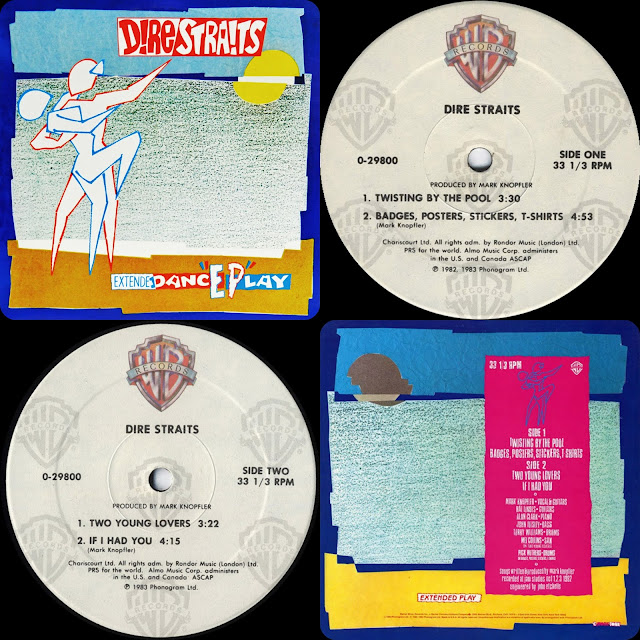 After September 1982's Love Over Gold, Mark Knopfler and his Dire Straits mates released the throwback-sounding ExtendedancEPlay barely five months later, in February 1983. Track 1, Side 1 is "Twisting By The Pool" which quickly became a mixtape staple as I included it whenever possible at the end of Side B, almost always unlisted. As the past four decades have flown by, I'd be hard-pressed to tell you how the other three songs went if I hadn't just revisited them this week. While Jason & the Scorchers were more of a private joy, everyone seems to enjoy "Twisting By The Pool".
#2
INTO BATTLE 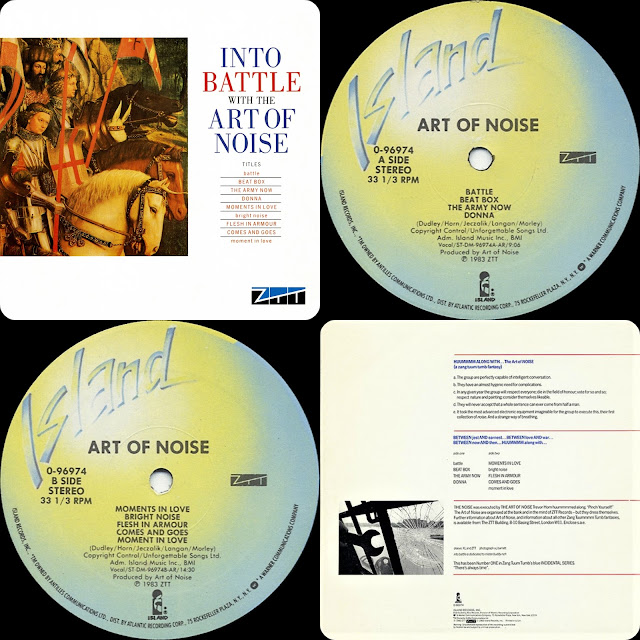 Into Battle is one of the many records I purchased soon after hearing a song featured on a television show or in a movie. In this case, the song was "Beat Box", the movie was Breakin' and it was May 1984. 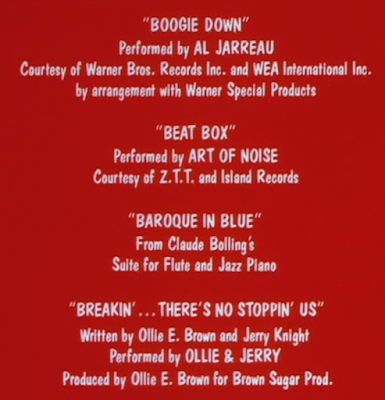 Stayed and watched the bright red screen of crawling credits (above) after the movie looking for something that resembled "Beat A Box" (which is what I thought I heard) and saw Art of Noise and "Beat Box". Then exited the theater in the mall and went directly to Wherehouse (also in the mall) and found Into Battle with "Beat Box" filed among the twelve-inch singles. (It wasn't until Valentine's Day 1985 that I finally acquired the Breakin' soundtrack album from Columbia House.) Besides "Beat Box", the big takeaway from Into Battle was the epic chill of "Moments In Love". A month after picking up Into Battle, my Art Of Noise collection doubled in size with the addition of their first album (Who's Afraid Of) The Art Of Noise and suddenly everyone I knew was a fan.
#1
...and a time to dance 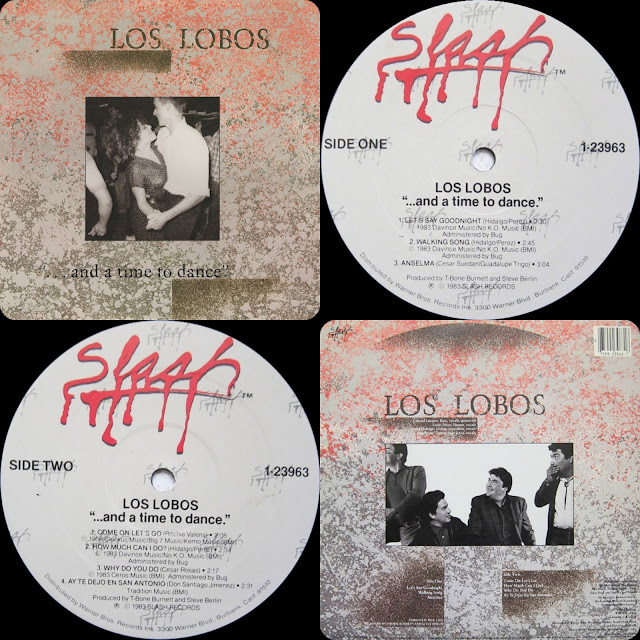 Ask me what I had for lunch today and I would have to think a while on it but ask me where I first heard Los Lobos and I'd immediately say Zip's on University. That Zip's location (there were four in town at the time plus Loco Records, which was owned by Zip's) stands out as:


I was in Zip's one day after school and this cool song came on featuring an accordion and a singer who just sounded happy! Then came a sax solo. It sounded like a Fifties rave-up and after it finished another track came on with a more prominent guitar and that enthusiastic vocalist. Needing to make my purchases and make it to the bus stop soon, I headed up to the counter with a couple albums (I can remember many things about that day at Zip's but cannot for the life of me even begin to guess what two albums I bought that day or what day it was) and saw that the record playing, the songs I had really liked was by a band called Los Lobos. Then a Spanish-language song came on, equally as powerful as the first two songs, and the clerk rang me up and asked if I wanted to take Los Lobos home for just $3.99. I had just enough money to pull the trigger on that deal so I was out the door before "Anselma", as the song in Spanish was titled, ended. Through the years, ...And A Time To Dance has been my most listened to of all the EPs from 1983 featured today. Los Lobos is one of the rare acts that record critics agreed with me on and ...A Time To Dance was voted Best EP in the prestigious Village Voice Pazz & Jop critics poll while "Anselma" won the first-ever Grammy for Best Mexican-American Performance.
🎧 🎧 🎧 🎧