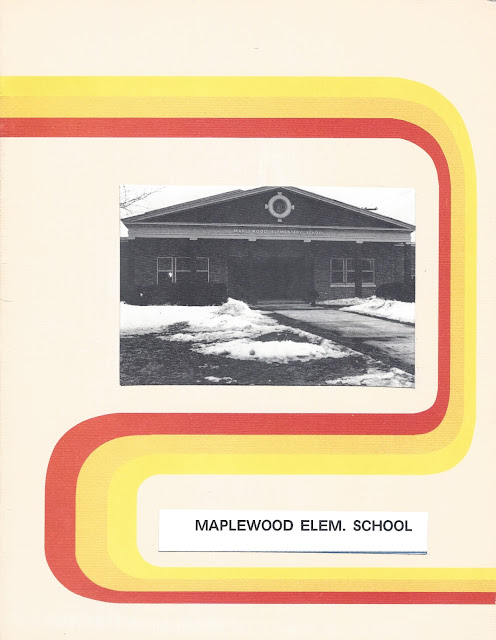 Back in November 1977, I was in Mrs. Raver's sixth-grade class at Maplewood Elem. School, located off-base about half a mile from our house on the Base, with its own special gate allowing passage. (My sister Angela Dawn was in Mrs. Jonas's third-grade class.) For each grade, there were two teachers. The other sixth-grade class had 26 students for picture day while I was one of 27 students pictured in Mrs. Raver's class. Being a predominant Air Force dependent school, the size of the class fluctuated throughout the year as families transferred in and out. Sometime in 1978-1979 when I was in seventh grade at J.W. Eater Junior High School, I made notes in the margins of my sixth-grade yearbook on former classmates who were not at Eater. Nine of my classmates, a full third of the class, had moved before seventh grade started. Our yearbook for that school year is just a little thinner than a 2017 issue of Rolling Stone. I do not have many specific memories of the time and I've already shared most of - if not all of - them but I want to share an image from that yearbook that still bothers me forty years later: 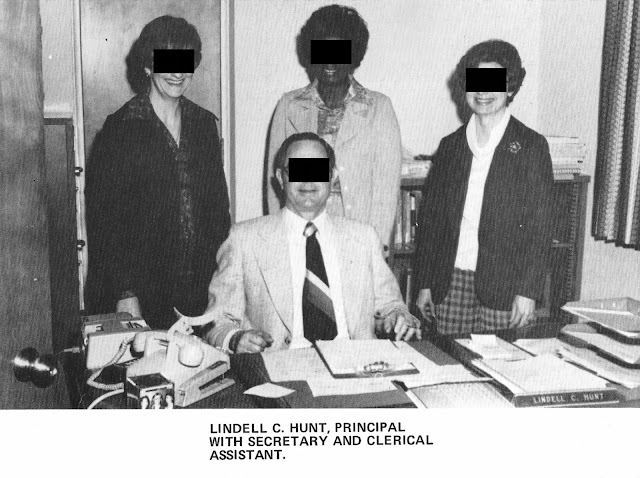 I added the black bars for effect but did you notice is what looks like a little picture of Charlie's Angels in the lower left of the pic, by the telephone and stapler? The thing that has always bothered me about the photo is the caption, which identified three people, and the photograph, which clearly showed four people. For the record, the last names of the three women pictured behind Principal Hunt from L to R: Ile, Sanders, and Rule. I cannot remember which of the women was the secretary or the clerical assistant or the third woman's job title. I'm guessing that none of them ever had the office radio tuned to WLS on a daily basis, though. 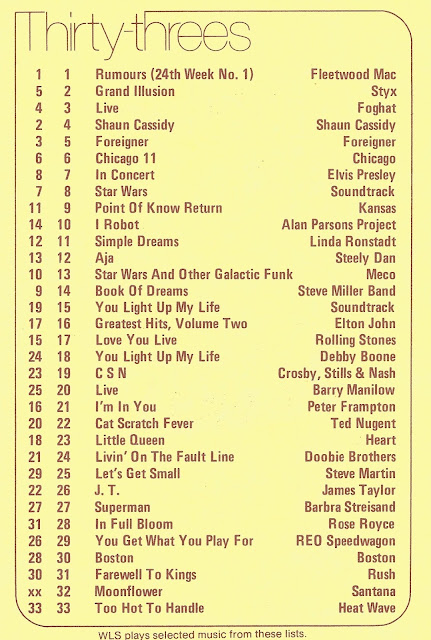 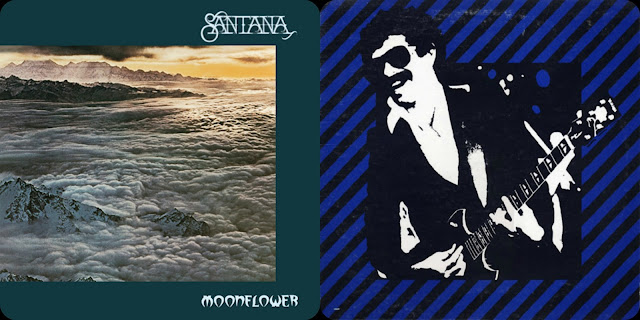 The Thirty-threes chart for the week ending November 19, 1977, features just one debut with Santana's Moonflower jumping in at number 32. A double album featuring a mix of studio tracks and live recordings, Moonflower is a better than expected listen in spite of its inherent unevenness, a testament to the band's chemistry in the studio and on stage. Santana's studio cover of The Zombies hit "She's Not There", the first of two singles from Moonflower, would appear on WLS's Forty-fives chart in mid-December, eventually climbing to number 37 in a five-week stay. A twelve-inch promo-only single (above right) featuring a 2:58 edit as well as the 4:08 album version of "She's Not There" in stereo on one side and mono on the flip was serviced to FM Rock stations. 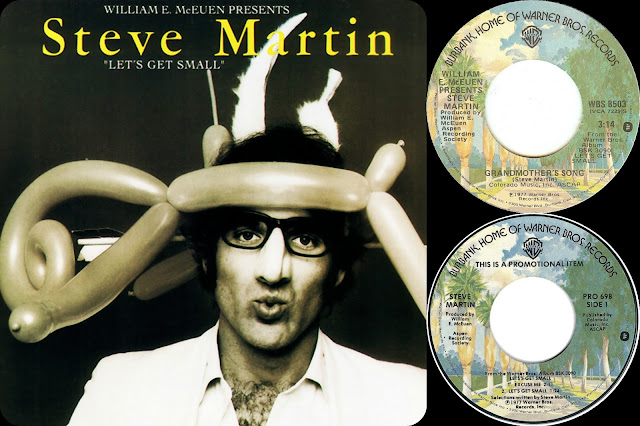 Steve Martin was very popular with me and my friends in 1977 and it was a pretty big deal when one of them somehow got ahold of the Let's Get Small album and started sharing the routines and bits with the rest of us on the playground. By the time the album was released, Martin had hosted Saturday Night Live three times though none of us had seen him on that show though we had seen him on The Muppet Show within the last month. "Grandmother Song" was released as a single at retail and a promo-only single with four edits from the album was sent to radio stations. On this week's Thirty-threes chart, Let's Get Small was at number 25 in its second week on the chart. 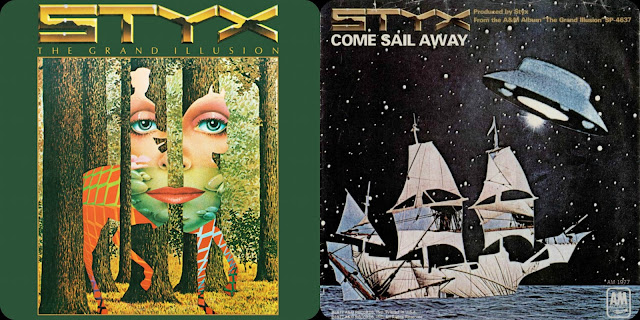 Styx's The Grand Illusion moved up three spots this week from number 5 to number 2. Originally released on July 7, 1977 (7/7/77), the album debuted on WLS's Thirty-threes chart at number 33 for the week ending August 6, 1977. Without a lead single or triumphant hometown concert stand to promote the album, The Grand Illusion moved slowly but steadily up WLS's chart. "Come Sail Away" became the album's first single in September and both it and The Grand Illusion accelerated their climbs up their respective charts. For the week, "Come Sail Away" moved up four spots, from number 15 to number 11 on the Forty-fives chart and would eventually peak at number 3 in its 3:07 radio edit version. The Grand Illusion would hold at number 2 on the Thirty-threes chart for ten consecutive weeks behind Fleetwood Mac's juggernaut Rumours at Number One. 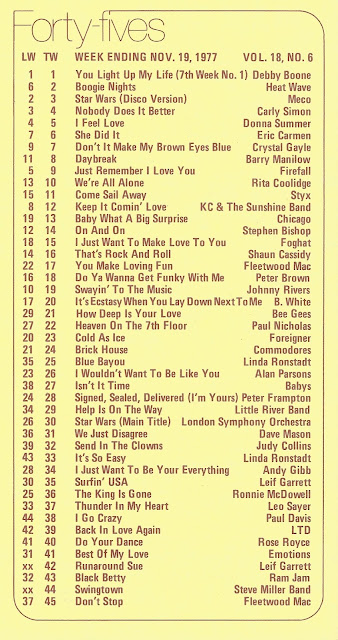 On the Forty-fives chart, another juggernaut was enjoying it's seventh and what turned out to be final week atop the chart. There were three former Number One songs still on the chart as well, at numbers 16, 34 and 41, respectively.

I eventually bought all three of those former Number Ones but only two of them back in 1977. As the designated Shaun Cassidy fan in the family, my sister was the keeper of the Shaun Cassidy singles back then so I borrowed her copy of "That's Rock 'N' Roll". Though if you were to ask her, as I have repeatedly, she does not remember worshipping the teen dream. On our recent trip to Las Vegas, I added the picture sleeve 45 of "That's Rock 'N' Roll" to my collection. For $1, I wasn't pulling the records out of the sleeves and examining them with a critical eye. Fortunately, I lucked out and nearly all the records are relatively quiet and listenable - though one was cracked in half, the picture sleeve was pristine - and the Shaun Cassidy one had two 45s in the sleeve: the regular retail one and the promo stereo/mono 45. 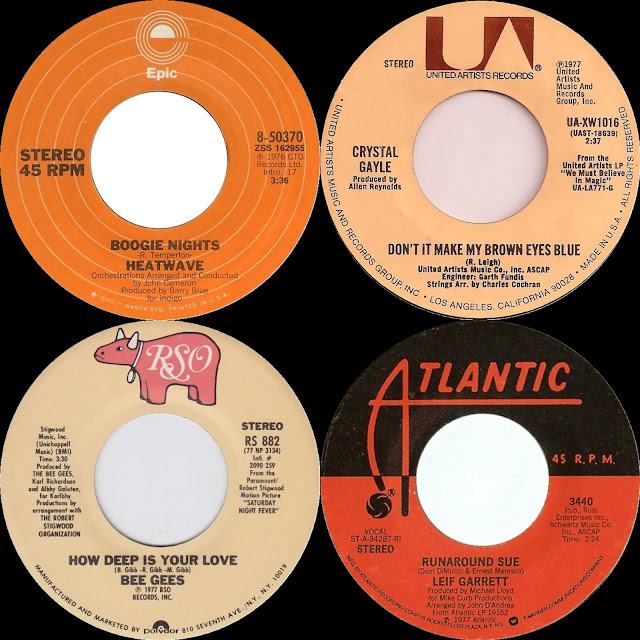 Also, present on the Forty-fives chart are the four future Number Ones pictured above. Each of the first three would spend two weeks at the top spot while Leif Garrett would spend just one week at Number One with his cover of Dion's "Runaround Sue". The single was one of two debuts on the WLS chart - the other being Steve Miller Band's "Swingtown" - and made Garrett the third artist on the chart with two concurrently charting singles: 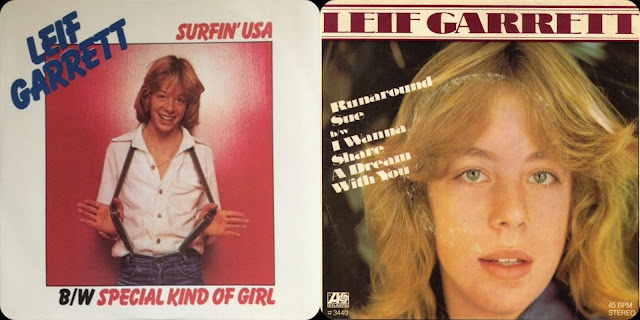 Shaun Cassidy's first two albums in 1977 were produced by Michael Lloyd who had also produced The Osmonds and David Cassidy earlier as well as Debby Boone's "You Light Up My Life". Lloyd also oversaw Leif Garrett's first two albums. Leif's cover of "Surfin' USA" spent just over a month on the WLS chart, falling five from its peak at number 30 to number 35 this week while "Runaround Sue" debuted at number 42 on its way to Number One seven weeks later. 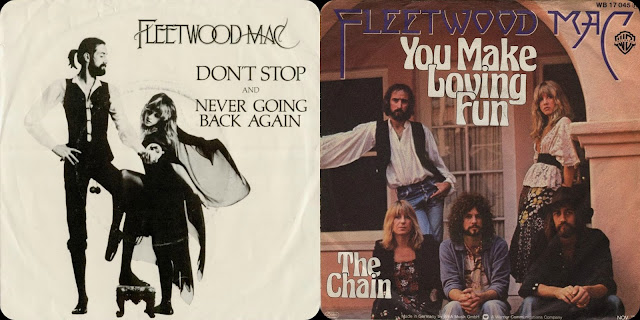 Fleetwood Mac's "Don't Stop" was number 45 this week on the Forty-fives chart in the final week of a fifteen-week stay that saw it top out at number 8 back in September. "You Make Loving Fun" was still climbing this week, up five from last week to land at number 17 though it would peak at number 10 in about a month. 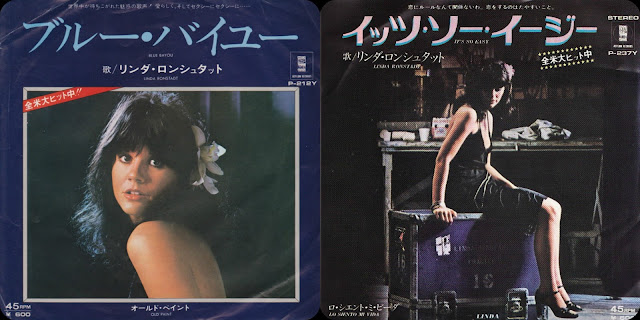 Linda Ronstadt was that rare chart animal with two singles simultaneously on the rise with both her singles jumping ten spots ahead this week with "It's So Easy" landing at number 33 and "Blue Bayou" sailing in at number 25. (The parent album of both singles Simple Dreams was also on the rise, sitting just outside the Top 10 of the Thirty-threes chart this week.) "Blue Bayou" would peak at number 7 and "It's So Easy" would best it by one spot, hitting number 6. Like each of Leif Garrett's singles, both of Ronstadt's 45s had been hits for others. 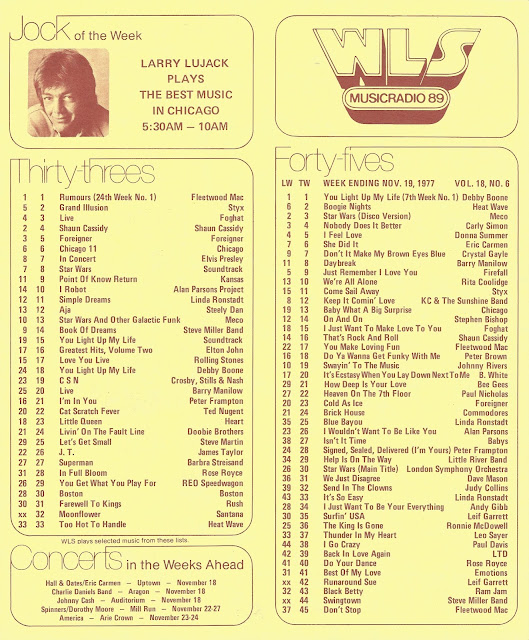 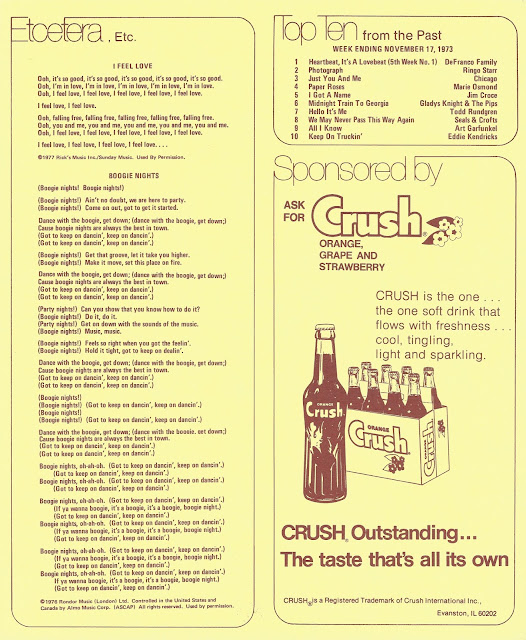