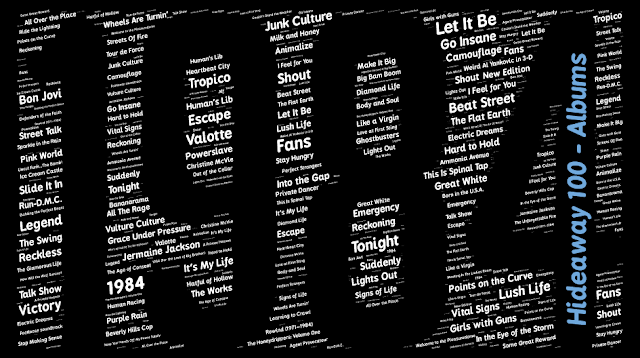 Before we start Day Four, allow me to shed some light on the charts I've included with each post as there has been some confusion. In particular, why are year-end charts from 1985 being included if this is a list of My 100 Favorite Albums from 1984? I've included both 1984 and 1985 year-end charts from Billboard and Rolling Stone respectively in an effort to give a fuller, more complete chart snapshot of the albums. The year-end charts for both publications are not tabulated from Jan 1st to Dec 31st. By their very nature, each chart excludes albums that were released and charted after their cut-off. Below are two of the methodologies:

I've only included 1984 albums that appear on the 1985 charts. Hopefully, that clears up any confusion I may have inadvertently caused. While I've done my best to exclude any albums that were not released in the US in 1984, as always I rely on you dear viewers to point out any errors, mistakes or oversights on my part. You ready to count down ten more albums? Me. too. 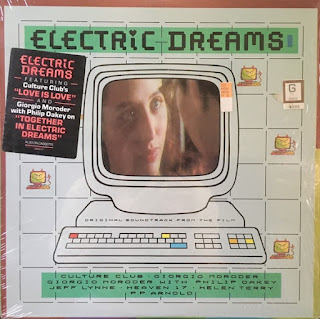 I wrote about Electric Dreams in a fairly detailed post in 2013 that has since been ravaged by my own poor coding choices. I'm providing the link to that older post but apologizing ahead of time if I have not gotten around to tidying up before you get there. Long story short: I love Culture Club's "Love Is Love" which was originally found on this soundtrack album. Confession time: Your boy HERC has not always been in love with the finger-picking music of Lindsey Buckingham. Sure, I dug his work with Fleetwood Mac and on the once hard-to-find "Holiday Road" single from National Lampoon's Vacation but it wasn't until 2008's Gift of Screws album that I went back and re-evaluated Buckingham's solo catalog beginning with Law And Order (1981) and moving onto Go Insane from 1984 which turns out has so much more going for it than just the beguiling title track. The album has really come on strong among my favorites over the past few years and when I say "favorites" this time, I mean the albums I have been making a concentrated effort to listen to more often. 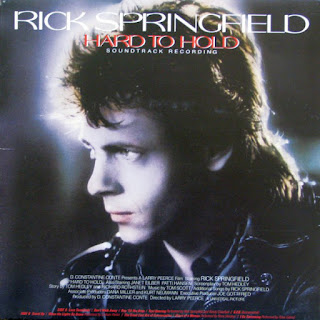 I don't know what your first read from this album cover is but here's mine: "Wait, Rick Springfield was in a vampire movie" followed by "Hey, that looks like the back of the album with the movie credits and track listing". Turns out it wasn't a vampire movie and that was indeed the front of the album jacket. I was a fan of Rick Springfield's music but he was my girlfriend's number one dream crush. I sat through this film with her though I enjoyed Springfield's on-screen performances and his contributions to the soundtrack as well as their respective music videos. I remember lobbying hard to see Up The Creek that same weekend but I had to settle for the weekend before my 18th birthday a few weeks later instead. And then she broke up with me. 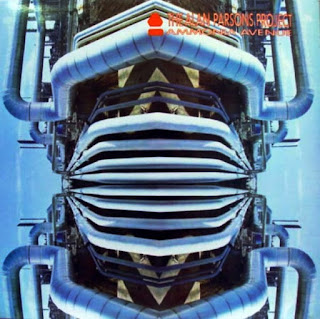 Back at number 73, we covered Vulture Culture, the second Alan Parson Project album released in 1984 and here at number 67, we have the first Parsons album of 1984. According to Parsons, both albums were originally planned to be one double album but something happened along the way and he ended up putting out the two albums a few months apart. As the follow-up to Eye In The Sky, their biggest selling and most acclaimed album, expectations were high for Ammonia Avenue and it delivered on three different sounding singles: the Spectorish Wall Of Sound on "Don't Answer Me"; the trademark Parsons slow burn "Eye In The Sky" sound-alike "Prime Time" and Seventies-era Parsons sounding "You Don't Believe" with galloping drums and bass. (That last song was included on 1983's The Best Of The Alan Parsons Project album and also released as a single before being included on Ammonia Avenue.) 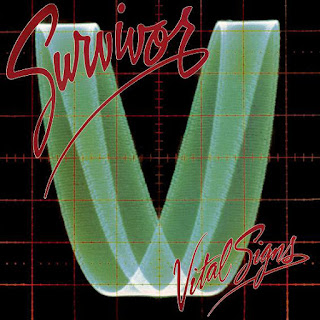 Survivor had two lower charting albums under their belts before Sly Stallone commissioned them to pen the theme song to Rocky III after Queen refused to allow "Another One Bites The Dust" to be used. I bought the Eye Of The Tiger album in the Summer of 1982 and played it a lot. It had two ballads I used to skip through. Apparently, the guys released an immediate follow-up to Eye Of The Tiger in 1983 but I never heard it back then. How about you? To me, the follow-up to Tiger has always been 1984's Vital Signs, which features new vocalist Jami Jamison and is front-loaded with three singles among the album's first four tracks. Until the late Nineties, Tiger and Signs were the only two Survivor albums I had and I couldn't believe it when the band got the double-disc, thirty-five song Essential treatment in 2014. If you buy only one Survivor album, let it be 2004's Ultimate Survivor - it's got all the obvious hits, a few worthwhile album cuts and the band's original version of the 38 Special track "Rockin' Into The Night". 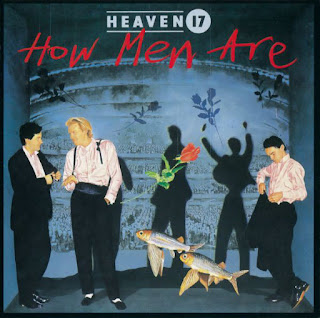 In 1982, Arista Records made the decision to issue compilations as debut albums here in the US for two of their up and coming UK acts, Thompson Twins and Heaven 17. I bought that Heaven 17 album, loved it and became the act's official biggest fan here in the Southwestern Sonoran Desert Region Quadrant. Eventually, I picked up the two albums that made up that compilation as well as a few twelve-inch singles and then in 1984 How Men Are dropped and I tirelessly argued that the band should have rechristened themselves Heaven 18, Heaven 19 or even Heaven 20 - they took their name from the fictional band Heaven Seventeen from A Clockwork Orange so who was gonna know? Featuring an expanded sonic palette courtesy of technologically advanced synths as well as additional musicians, more crooning from Glenn Gregory and an overall shift in sound from the hyperkinetic dance music found on their first two releases to a more chill and laid back style. How Men Are is my favorite studio album by the band. And that's no lie. 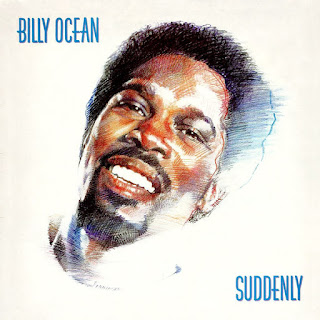 For most people, Billy Ocean's Suddenly is all about "Caribbean Queen" (or "European Queen" or "African Queen" depending on which Continent you bought your music) and the title track ballad but for me, it is all about "Loverboy." Sure, the five minute and change album cut is fine and dandy with its sturdy rhythm and galloping guitar riff. Then they had to go and make an Extended Mix, with all sorts of cacophony going on in the mix and it was GAME OVER for this guy; thank you, goodnight and have a safe drive home. 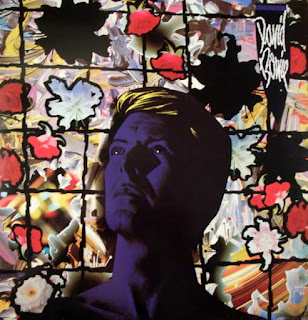 I feel like I've been kicking myself so far in 2016 for not liking Tonight upon its release in 1984. Admittedly, if this list were compiled in 1984 or 1985, the album would be nowhere to be found but thanks to revisionism, I am proud to say the album is way up here at number 63 among My 100 Favorite Albums from 1984. Whether I'm "Loving The Alien", "Dancing With The Big Boys" or merely jazzin' for "Blue Jean", this follow-up to Let's Dance is growing on me, making inroads upon each successive listen. 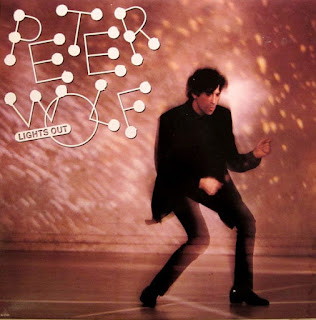 In 1984, I had only been a fan of the J. Geils Band since 1980's Love Stinks and since that time they gave me Freeze-Frame; what turned out to be their weakest live album; and their last studio album in 1984 after lead singer Peter Wolf had departed because of creative differences. So I got in on the act just in time to witness their demise but I was wise enough to work back through their catalog and take a chance on Wolf's solo joint, which turned out to be a delight. Powered by four better than decent singles and produced by electro artist Michael Jonzun (of the Jonzun Crew and brother of New Edition impresario Maurice Starr), Wolf's Lights Out was probably my most surprising album in 1984 as my expectations were fairly low. If I were the presiding judge in determining the future direction of The J. Geils Band between that of Seth Justman's You're Gettin' Even While I'm Gettin' Odd and Wolf's Lights Out, I would side with the latter. To his credit, Wolf has continued to make albums that are undeniably true to his musical image while the J. Geils Band has issued no new music since 1984. 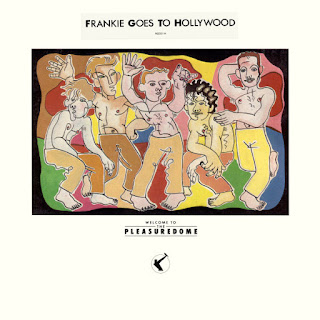 Welcome To The Pleasuredome might have been the most anticipated, over-hyped and then ultimately disappointing album of 1984. I know at least three people who tried to return their copies with various degrees of success after just one listen. I have held onto my vinyl and after years of listening to CDs, I listened to it for the first time in maybe 30 years the other night. Trevor Horn's production has never sounded better and my favorite tracks remain the same as they were in 1984. While I lacked the funds and other necessary resources to collect all the permutations of the singles from this album, I do have five versions of it on compact disc. And I had a sweet FGTH concert tank top (Frankie Say...) I wore to the water park the week after seeing them in concert in 1985 and it was stolen in what some (namely me) were calling the Crime Of The Century back then.