My earliest memories are from 1973. Or merely earlier this morning depending on the day. My Favorite Decade For Music is the ten year period 1973-1982, bookended by the year of my earliest musical memories and the year in music that for me outshined all the other years. As a seven year old I was not yet interested in owning any of these albums in 1973 - Dad however owned the majority of them, either on vinyl or eight-track, so I had access and did indeed listen to a lot of them in 1973 and beyond. My 40 Favorite Albums from 1973 is a combination of mashed-up memories, actual play counts and the personal preferences of a man who has spent the overwhelming majority of his time here on this big blue marble listening to music. Though albums by Alice Cooper, Genesis, The Who and others failed to make the cut, I offer no excuses - the albums below I have either grown up liking or have come to like after growing up. Its a subtle difference but a difference nonetheless. If you're just now joining this sentimental journey, click on 1973 My Favorite Albums in the tags below to jump to previous posts. 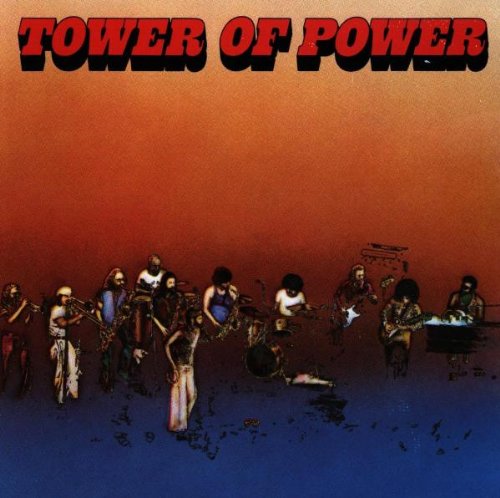 Can't recall first time I heard "What Is Hip?" but I know I liked loved it and mistakingly thought it was the Average White Band as it reminded me of their "Pick Up The Pieces" so it must have been after 1974. Noticed this album in my girlfriend's Mom's collection one night in 1982 or 1983 and she snuck it on the turnatable as her Mom was at work and the mystery was solved. And then, when the first side was finished and the tonearm lifted and returned to its perch, she flipped the record over, pulled the PLAY switch and then unexpectedly planted a deep passionate kiss on my lips as the music began. Now every time I hear that first song "So Very Hard To Go", I get this wonderful indescribable rush which is odd for such a sad, sad song. After I got married (not to the same girl), I was pleased to find out one of my brothers-in-law was a huge Tower Of Power fan and I continued my exploration of their back catalog. 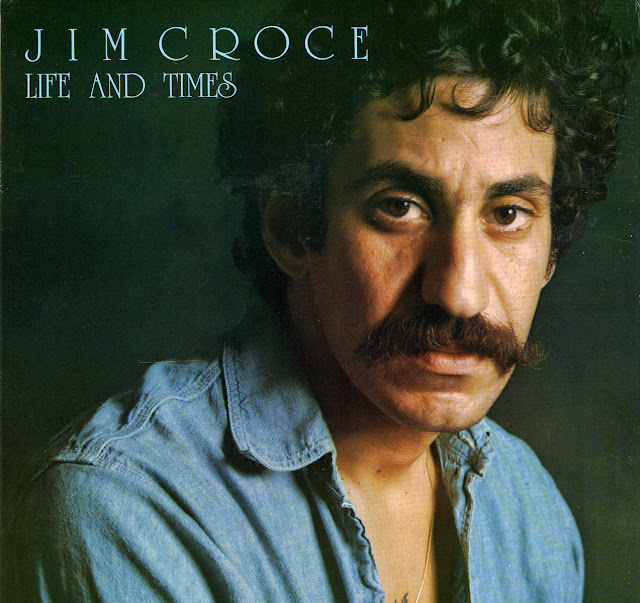 Dad was a big Jim Croce fan. Croce died a couple of months after this album (the follow-up to his smash You Don't Mess Around With Jim) was released and a posthumous I Got A Name was rushed out before the end of the year. While each album has a few really good songs, this one has "Bad, Bad Leroy Brown" so game over. 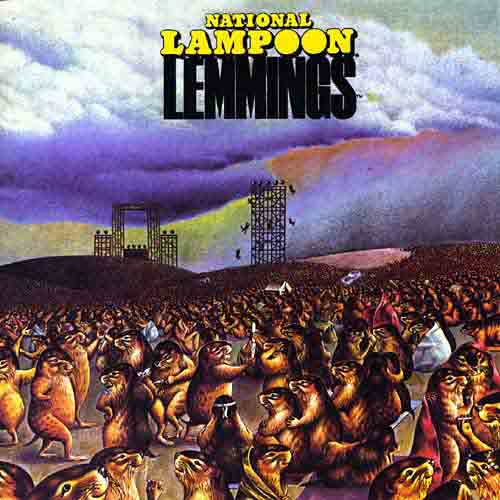 My sense of humor runs both goofy as well as dark. And while there were some stellar comedy albums in 1973 from the likes of Cheech & Chong, George Carlin, Fat Albert, Redd Foxx, Monty Python and Martin Mull, I was too young for them all then (except Fat Albert) and gravitated towards the antics of Looney Tunes and other Saturday morning cartoons. I have been a Saturday Night Live fan off and on since I was nine years old and used to sneak down in the basement to watch them after my parents had gone to bed. (Up late on Fridays watching The Midnight Special and then up again late on Saturdays, you know I have always been a napper.) My favorite Not Ready For Prime Time Players were John Belushi, Chevy Chase and Bill Murray. After Belushi's tragic demise, I entered a brief period of mourning, questioning everything before snapping out of it and pursuing higher knowledge. That pursuit of higher knowledge led me to began seeking out all of Belushi's work prior to Saturday Night Live which led me to a few National Lampoon albums including Lemmings, which I listened to with headphones on, laughing so loud alone in my room that my concerned Mom felt the need to check on me. It is a brilliant satire of Woodstock, complete with spot on musical impersonations including Belushi's uncanny Joe Cocker. I hadn't listened to the album in a few years until I caught a documentary about National Lampoon on the History Channel just a few weeks ago. The doc made me wanna revisit my Lampoon albums, especially Lemmings, and it also featured a unintentional yet touching reminder of Dad: Just before the documentary would go to a commercial break, they would show a closeup of an old illuminated stereo dial while a Lampoon comedy bit was heard. During two of those close-ups, Dad's Panasonic RS-820S was there in all of its green-glowing beauty. I paused the DVR, snapped a pic and sent it to my Sister and Mom and they both recognized it instantly.  Good times. 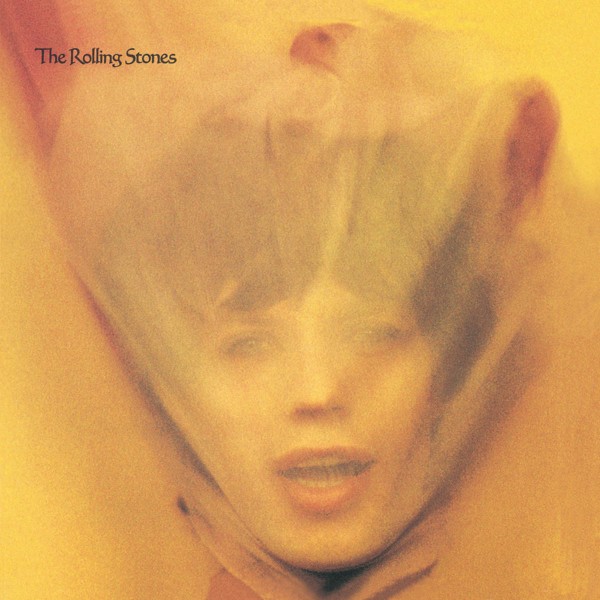 Is it among the best Rolling Stones albums? Not even close. But Goats Head Soup has two of my favorite Stones songs in "Doo Doo Doo Doo Doo (Heartbreaker)" and "Angie" plus a few others I like to hear more than occasionally which is more than you can expect from most albums, right? Didn't get my first copy of this album until 1983 and the album art still creeps me out a little. 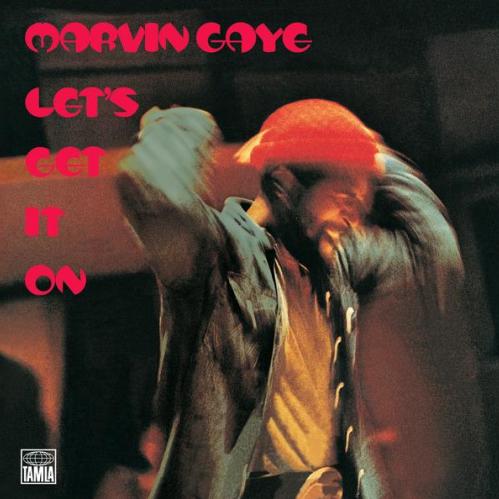 At the 8th Grade Play wrap party, the cast, crew and a few invited friends gathered in the basement of our teacher's house. Among the firsts that night: my first game of spin the bottle, my first french kiss with tongue and everything, my first Seven Minutes in Heaven, first kiss on the lips with an older woman and the first time I heard Marvin Gaye's Let's Get It On album in full. Given the environment (darkened basement), the people (horny pre-teens with raging hormones) and my own innocence at the time, the album was sex music. I've since enjoyed it many times over and can unequivocally, without a shadow of a doubt state that my first impression of the album was completely accurate. 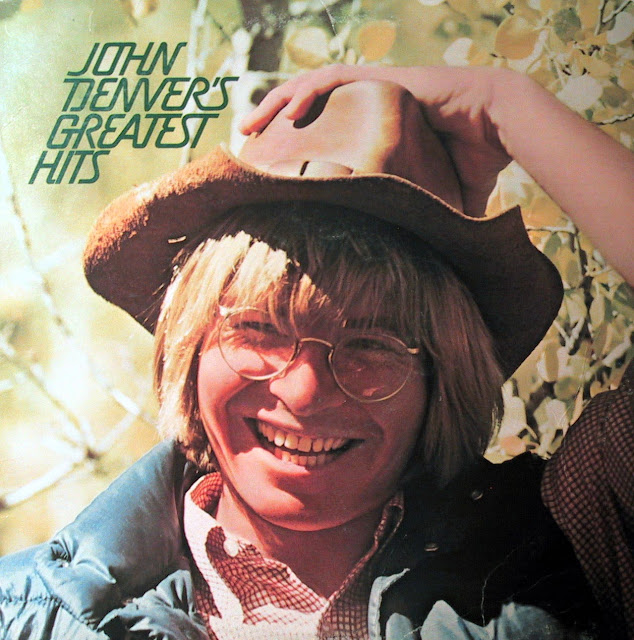 With the benefit and clarity of hindsight, this album jumped the gun somewhat - his subsequent album Back Home Again is my favorite Denver album and contains a couple of songs that would make the much stronger, hits laden Greatest Hits Vol. 2 in 1977. Dad played this eight-track often on sunny days so the song "Sunshine On My Shoulders" is forever linked to sunny days which seems like a no-brainer but my other favorite songs on the album, both "Take Me Home, Country Roads" and "Rocky Mountain High" also remind me of bright clear blue skies with the sun shining brightly above which is a frequent occurrence here at The Hideaway, where we have nearly 300 sunny days a year. 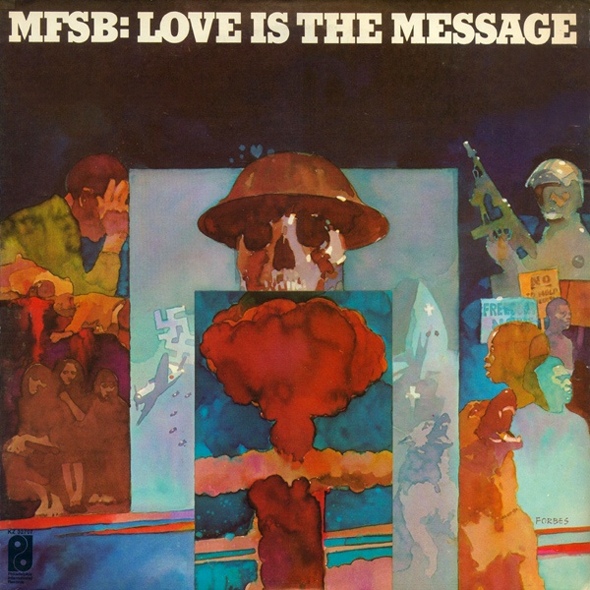 Though it was only used for three short years during the show's thirty-one season run, "T.S.O.P." will forever be known to many, including me, as the Soul Train theme. The title track of this album reminds me of the Star Wars theme so much so that when I start to hum along with it, I invariably segue into humming the Star Wars theme. Besides those two songs, the only other one that gets any play here at The Hideaway is the saxy cover of Diana Ross's "Touch Me In The Morning" which I prefer to Marlena Shaw's disco-fied version. First grabbed "T.S.O.P." in 1984 as part of a 3 for $10 sale on CBS budget line at Hollywood Records. (Nice Price?) It was on a terrific album with a clunky title. Later that Summer, in a similar sale, I picked up new copies of Love Is The Message and the group's greatest hits album. 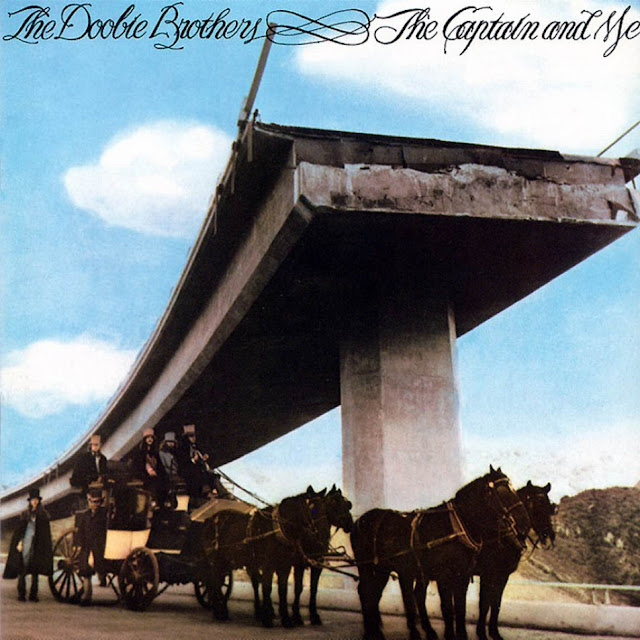 My Uncle Sam had this tape. As did Dad. The back to back righteous rockin' riffs of "Long Train Runnin'" and "China Grove" are all I remember from this album and it was Easter 1977 when I found the album Best of The Doobies, which kicked off with both songs, in my basket. Fate would smile on me again as that future brother-in-law, the one who loved Tower of Power, turned out to be a fan of the Doobie Brothers as well, allowing me to fully explore their back catalog and make a copy of the Long Train Runnin' box set we bought him one Christmas. 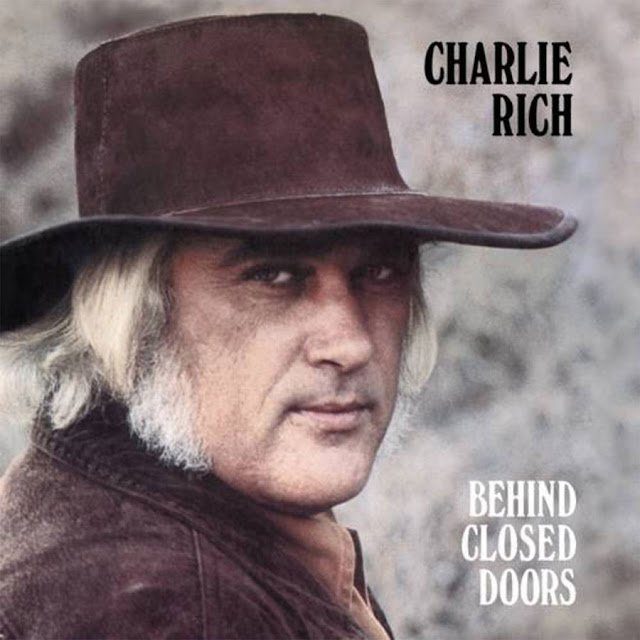 Dad had two or three Charlie Rich eight-track tapes but this one seemed to be his favorite. The album's pair of hit singles were fixtures on the Cow Talk jukebox and they are wonderful examples of the much-maligned countrypolitan sound at the pinnacle of its mellow pop perfection. Rich's voice is buttery smooth and you just know those out of control sideburns were ladykillers. 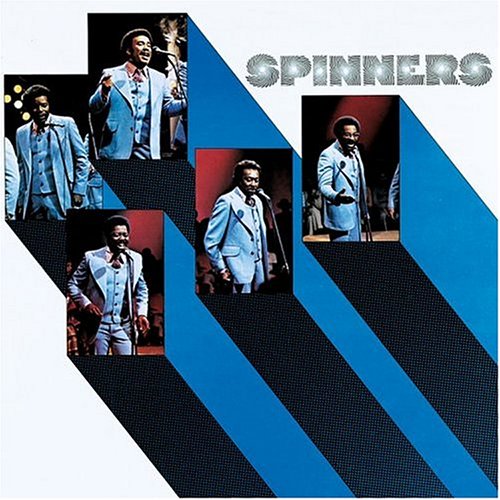 Any other given day, this album would have been in my Top 10. This time around however, it somehow fell through the cracks despite having three of my absolute favorite songs in "I'll Be Around", "One Of A Kind (Love Affair)" and "Could It Be I'm Falling In Love", all of which can also be found on my favorite Spinners album and upcoming Greatest Greatest Hits feature, 1978's The Best Of The Spinners on Atlantic Records. (Not to be confused with Motown's 1973 cash-grab album with the exact same title.)

*BONUS* VINTAGE ADS FOR THE ALBUMS


ABOVE FROM THE PAGES OF ROLLING STONE 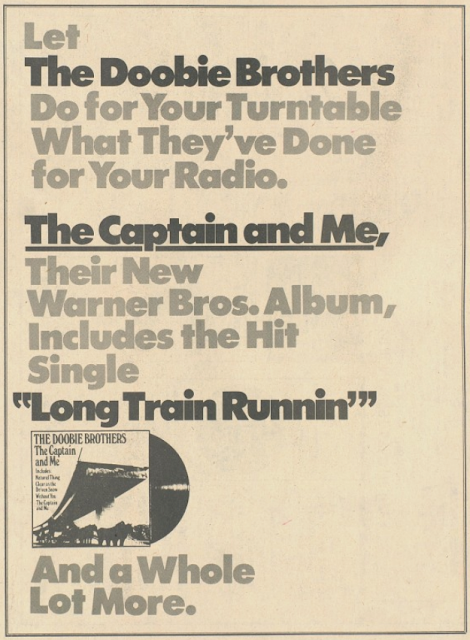 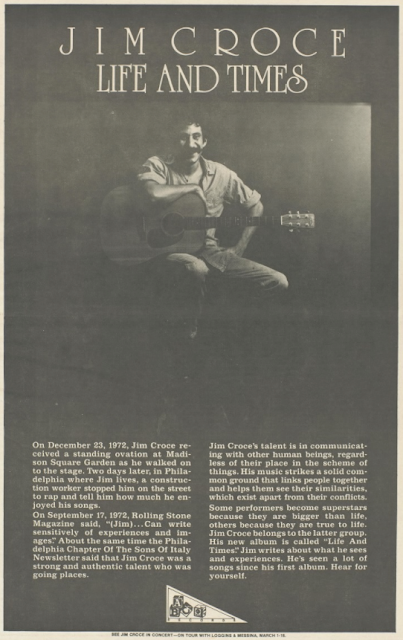 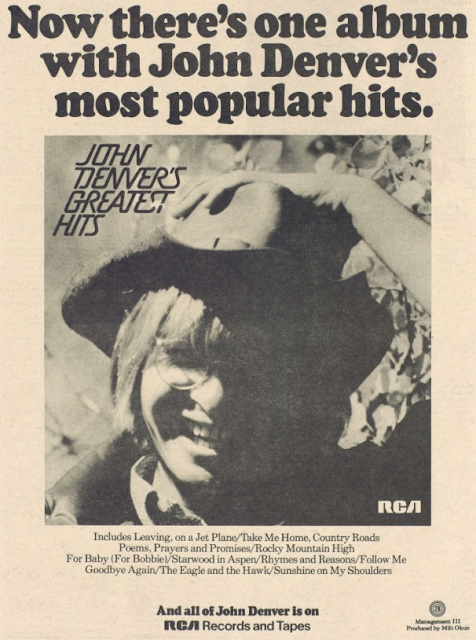 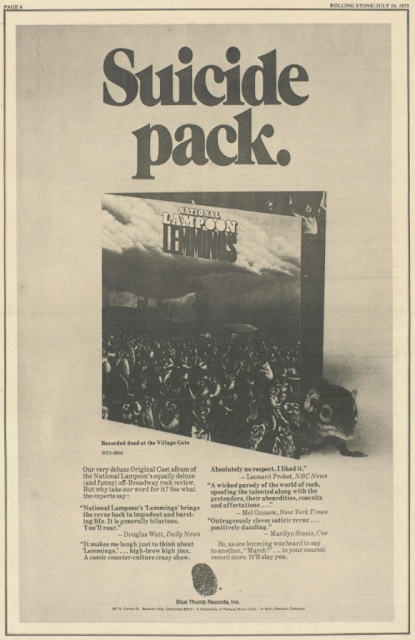 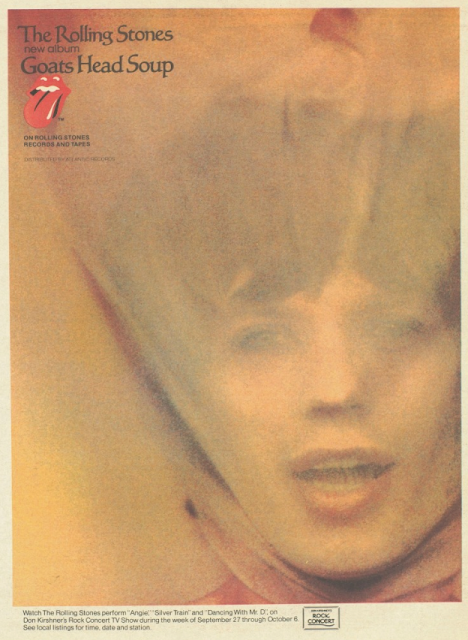