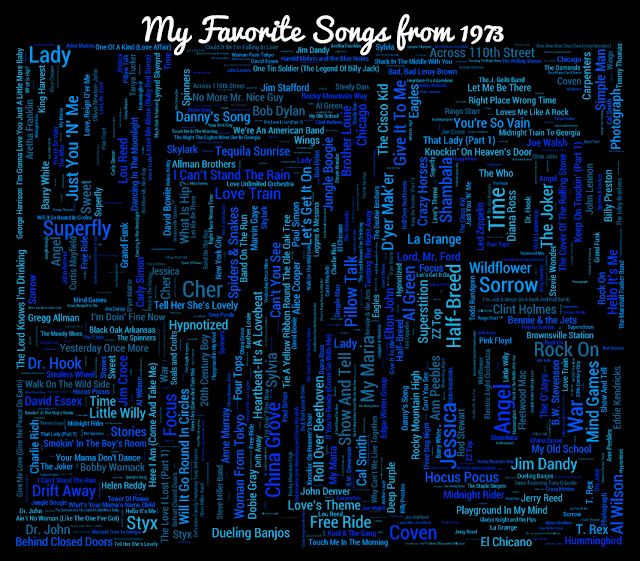 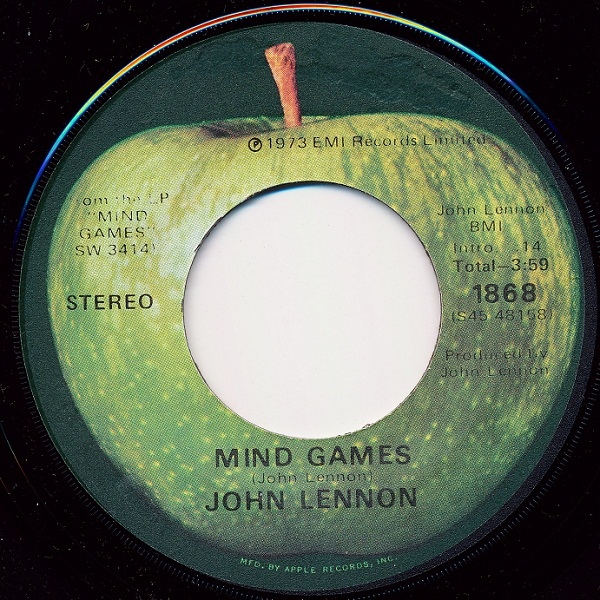 All four Beatles charted with solo Top 20 singles and Top 10 albums in 1973 and the group even had a pair of Top 3 albums with their first ever compilations 1962-1966 and 1967-1970. "Mind Games" was Lennon's highest charting single (#18) from the 1973 album of the same name.  While I don't have any specific memories associated with this song, it is one of my favorite singles by John and I appreciate his positive message of "love is the answer". 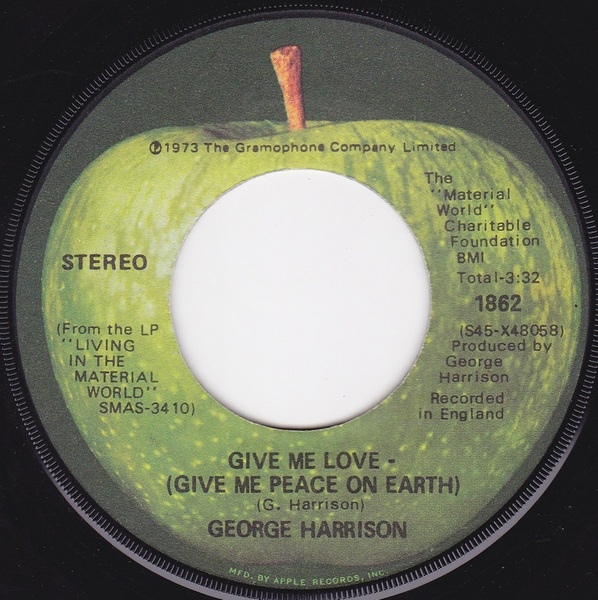 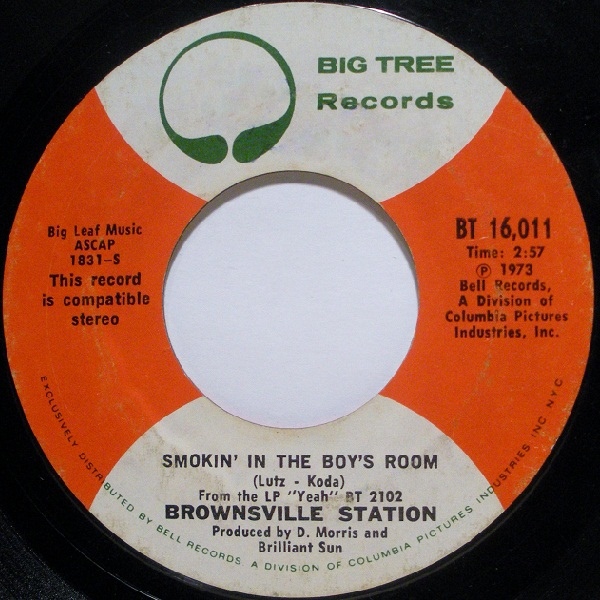 Songs like "Smokin' In The Boy's Room" are what give rock its badass, subversive reputation. Not only that, it's a fun sing-a-long. Don't tell anyone but I prefer Mötley Crüe's 1985 cover. It has more of an edge, rocks a little harder but Cub and the boys sure turned up the rock when they appeared on the January 25, 1974 episode of The Midnight Special. 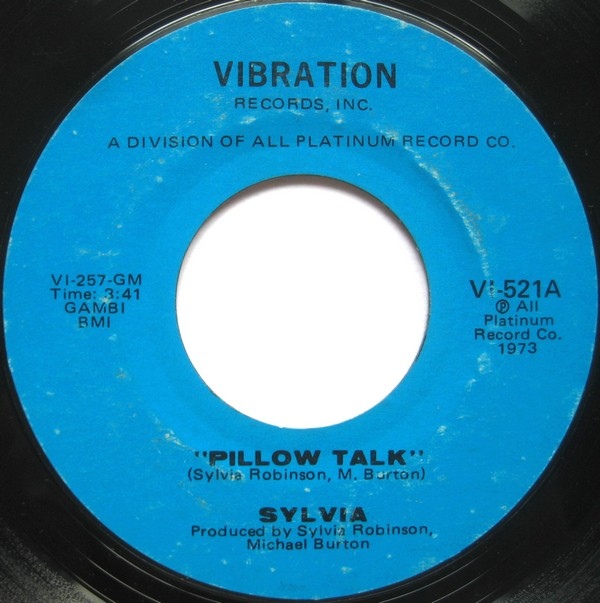 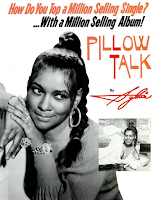 Sylvia brought the breathless, orgasmic whisper of "Pillow Talk" to mainstream airwaves somehow way back in 1973. Were there protests? Did parent and church groups try to stop their local stations from playing such a provocative and sexy song? Turns out she originally wrote it for loverman Al Green who turned it down because it offended his religious beliefs. Watch Ms. Robinson coo and purr her way through "Pillow Talk" on the April 14, 1973 episode of Soul Train. 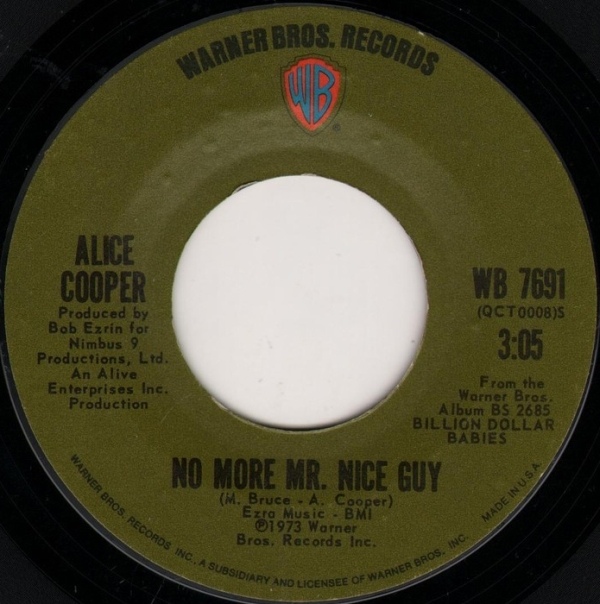 Another one of those anti-establishment songs, Cooper co-wrote "No More Mr. Nice Guy" in reaction to the treatment his own mother was receiving from her church group due to his public and on-stage antics. As a seven year old youngster, I dug the guitar riffs and the shout it out loud chorus. More than 40 years later, I dig the attitude.  And the riffs and chorus. 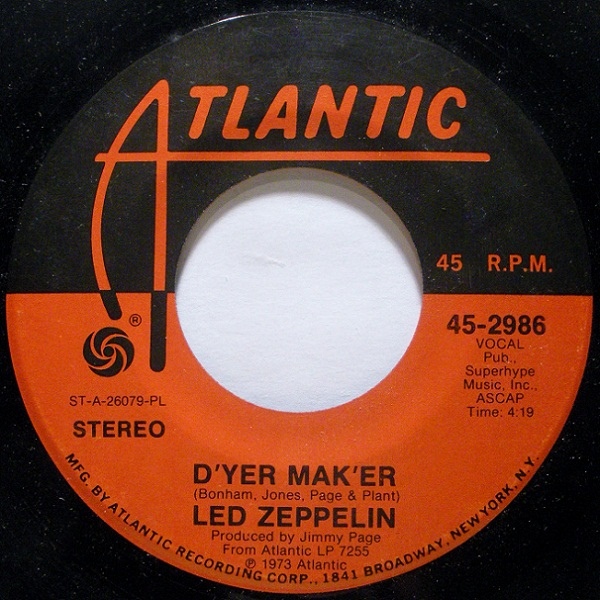 Bonham's drums sound like his usual thunder and that was what drew me into the pseudo-reggae of "D'yer Mak'er" - well that, and that serpentine guitar riff Pagey plays. Not the best Zeppelin but removed from the context of the album Houses Of The Holy, this is the only song that doesn't make me wanna hear another song immediately afterward. Hear the rare promo only MONO radio edit which is probably the version I first heard on the radio way back when. 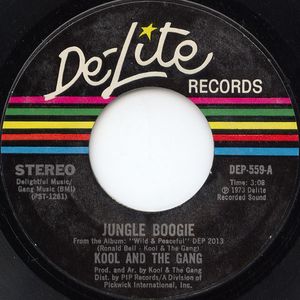 This song starts with a gong crash. A GONG CRASH! And then all manner of madness breaks out in "Jungle Boogie". Killer horn stabs and almost no lyrics to speak of make this a dance floor filler of the highest degree. Kool & the Gang would later use a muted gong crash to open their 1976 song "Open Sesame" which was later included on the Saturday Night Fever soundtrack. Kool & the Gang appeared on both Soul Train and The Midnight Special performing "Jungle Boogie" but it was only on the latter show they performed it all the way live on July 12, 1974. 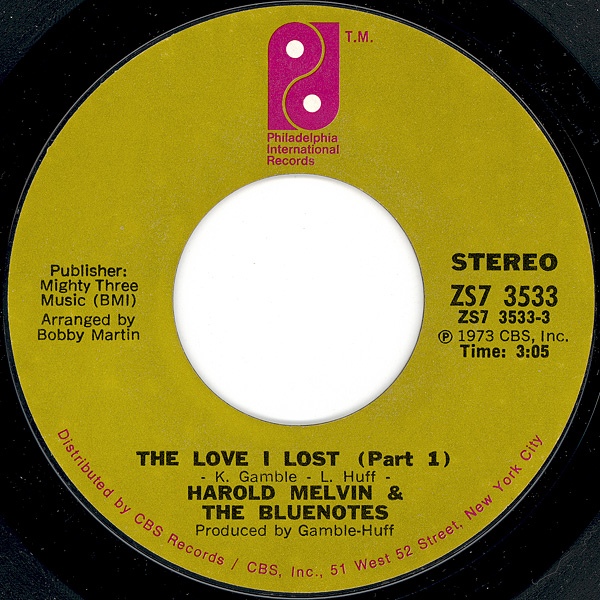 A lot of the Philadelphia International Records sound seems effortless and "The Love I Lost" is no exception. The beautiful harmonized backing vocals contrasts with Teddy Pendergrass singing the lyrics of a man wounded by lost love all to a danceable beat. This was disco before we knew what disco was. The single edit gets the message across but the almost seven minute album version ups both the sweet harmonies and Teddy's obvious heartbreak. My favorite version of the song is Tom Moulton's 12:30 remix on Philadelphia International Classics: The Tom Moulton Remxies. 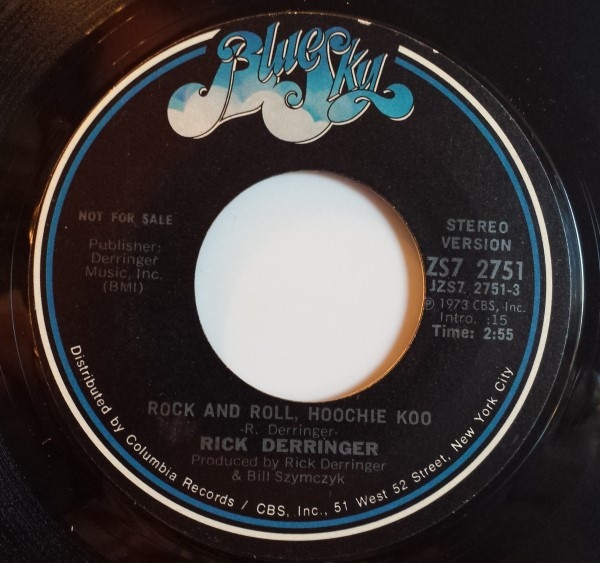 I associate "Rock And Roll, Hoochie Koo" with my Uncle Sam though I have no specific memory attached. He was a cocky extrovert, highly confident and extremely outspoken back in the day. Love that guy. Watch Rick Derringer rock it up with his bandmates in the Edgar Winter Group in this performance from The Midnight Special that aired November 2, 1973. 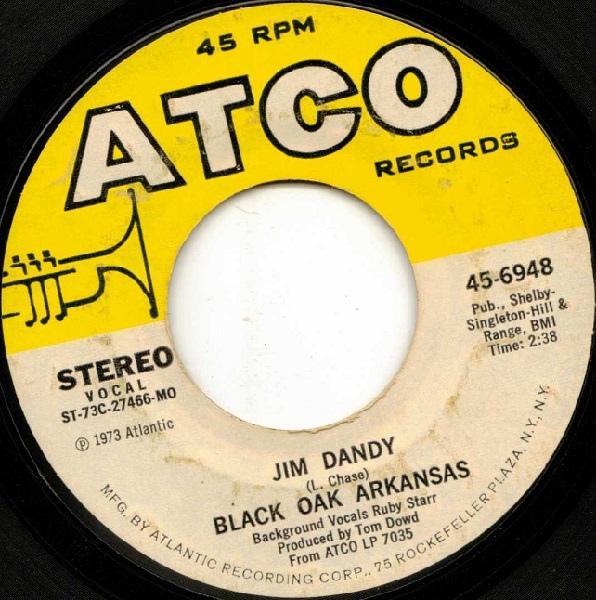 Was anyone ever more cocksure than Black Oak Arkansas's James Mangrum, who adopted his stage name from their cover of LaVerne Baker's "Jim Dandy"? Doubt it. That man strutted around the stage bare-chested, whipping his hair around while telling us his tall tales of being in the right place at the right time "Jim Dandy to the rescue!"  See what I mean in this clip from the episode of The Midnight Special that Black Oak Arkansas hosted when it originally aired on March 21, 1975. 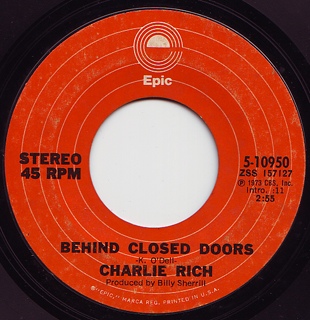 "Behind Closed Doors" along with "The Most Beautiful Girl" were staples on the legendary Cow Talk jukebox which I enjoyed listening to for a few Summers (though not every Summer) from 1973-1979. While I love both those songs from 1973, "Behind Closed Doors" gets the nod because of the romantic mood it sets as opposed to the sadness of "The Most Beautiful Girl" and its lovelorn tale. In an unprecedented feat, "Behind Closed Doors" won just about every award it was nominated for the following awards season including a Grammy, an American Music Award and Song of the Year awards from both the Academy Of Country Music and the Country Music Association.  Watch The Silver Fox in action in this undated clip from The Midnight Special. Rich performed "Behind Closed Doors" on the show three times in an eight month span from 1973-1974, including a guest host stint. 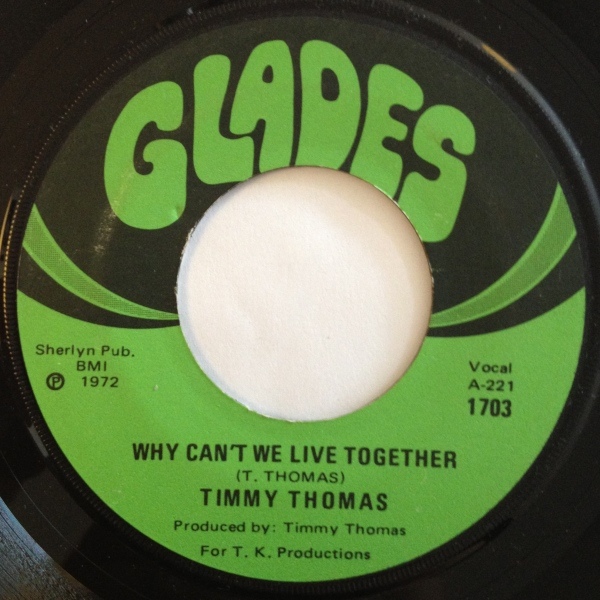 Has there ever been such a mellow groove? I remember hearing this one on the radio but had all but forgotten about it for almost twenty years, until I picked up the Rhino disc, Get Down Tonight: The Best Of T.K. Records in the Summer of 1990. Played "Why Can't We Live Together" to death one weekend and if asked at that time, I'd have said it was my favorite song for about 72 hours. Depending on how you feel about an underfed woman dancing in her black bikini, it might be your favorite song too. 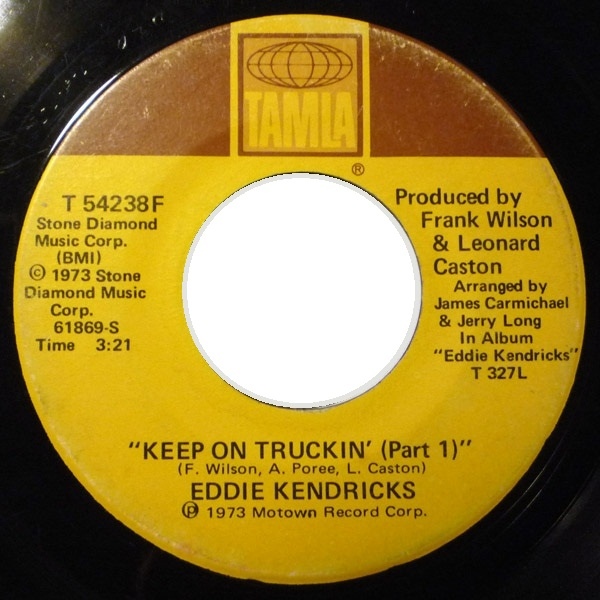 One of those songs always in the debate about which song was the first disco song, Eddie Kendricks made "Keep On Truckin'" a dance floor hit. The single is nice but the twice as long album version really gets me moving. Am I the only one who gets a strong Curtis Mayfield vibe from this one? Also available in an amazing Tom Moulton remix. 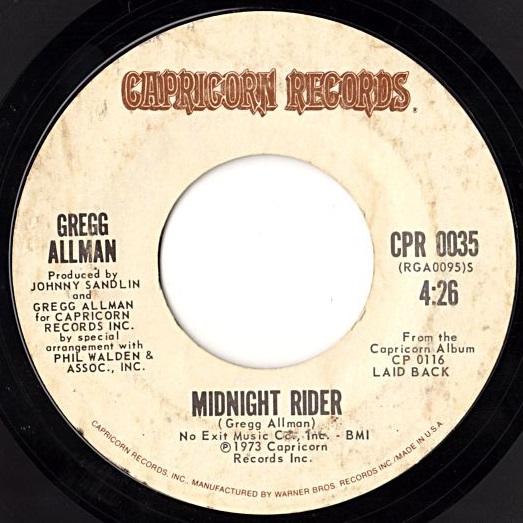 One of dem dere Southern Rock classics I'm irresistibly drawn to, Gregg Allman's do-over of his earlier Allman Brothers recording of "Midnight Rider" is best heard out under the stars or in the dashboard lit confines of a vehicle tearing down a darkened road. There's an implied outlaw allure though no crimes are explicitly mentioned and I'm cool with that. "But I'm not gonna let 'em catch me, no/Not gonna let 'em catch the Midnight Rider." 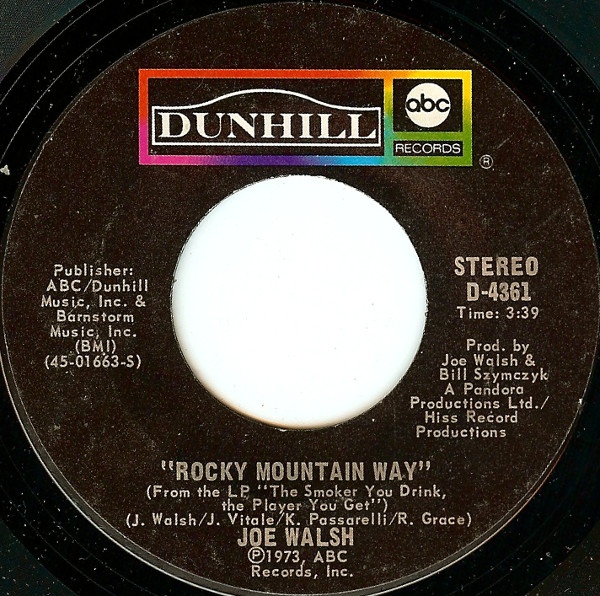 Well, what do you know? Another Rocky Mountain song. Joe Walsh and his killer band Barnstorm break out the bottlenecks for a blues rock slidefest in "Rocky Mountain Way" complete with a wicked talkbox solo. Watch guest host Richard Pryor introduce Joe and Barnstorm on a performance originally aired on the August 17, 1973 episode of  The Midnight Special. "The Rocky Mountain way is better than the way we had" 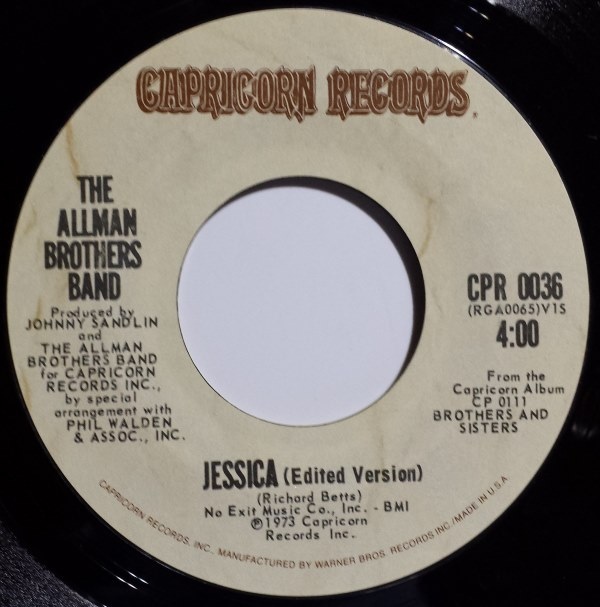 Another killer Southern Rock classic that seems like it has always been in my life, "Jessica" brings me joy every time I hear it. Phooey on the 4:00 single version, though; gimme the full length, never ending album version.  And when that's still not enough, I punch up the sixteen minute live version. 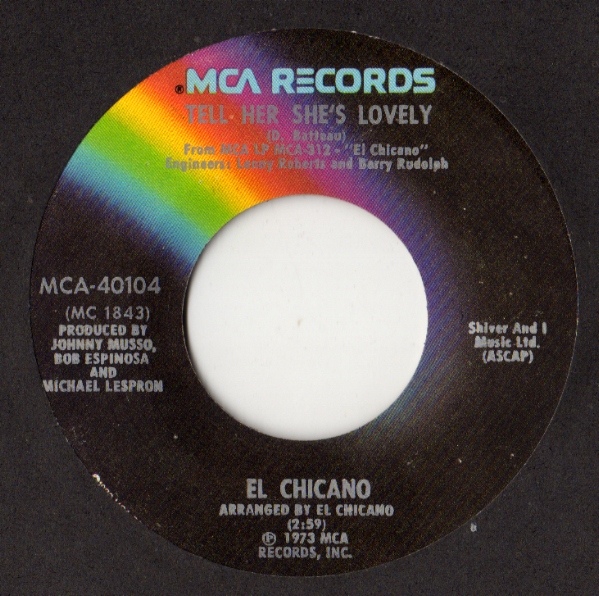 I'll admit that I used to think this was a Santana song when I was much, much younger but am glad I found out all credit for "Tell Her She's Lovely" goes to El Chicano. It's a beautiful weekend in the park song and I also have it on my Poolside Tunes playlist. Also a wonderful sentiment as shes always like to be told they are lovely. 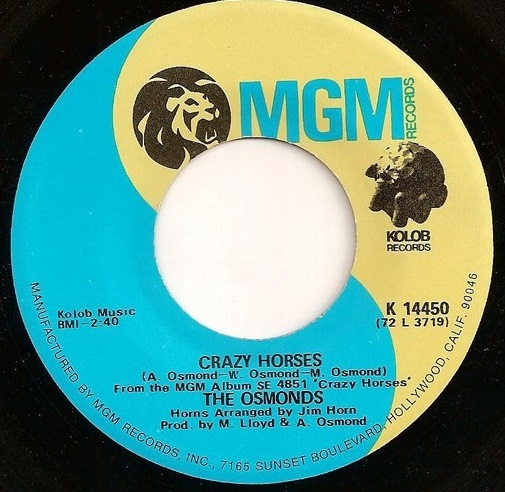 Some people can't stand The Osmonds (I could have stopped there and made my point) and their funk metal hybrid "Crazy Horses", a social message song about cars (the horses in the lyrics) and our dependence on fossil fuels, but I dig it a lot. It is lifted from the album of the same name, one of their three million selling albums released in 1973 and the first of the Brothers two uncharacteristically hard rockin' albums along with 1974's The Plan. Watch them perform the song live, with Donny on the keyboards making that electrified "whinny" sound that sounds a lot like Pac-Man dying, HERE, HERE and most especially the outfits they are wearing HERE as they play in front of an obviously edited in audience. 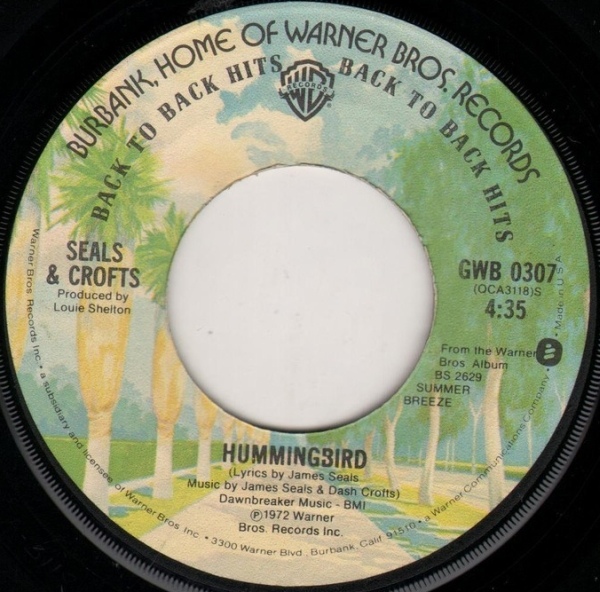 Jimmy Seals and Dash Crofts followed up their hugely successful "Summer Breeze" with the delightful "Hummingbird" from the same album, 1972's Summer Breeze. Built of many musical moving parts, the song begins with the guys singing harmony over an acoustic guitar, their voices rising higher and higher before seamlessly shifting keys as the rest of the instruments join in. As for me, singing the chorus of this song is the second thing I think of whenever I see a hummingbird buzzing around here at The Hideaway. The first is "Man, that's a pretty hummingbird." 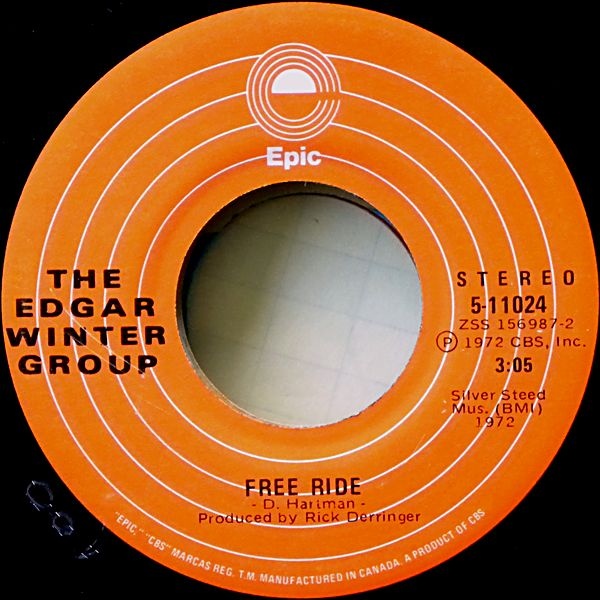 Another great driving song and another appearance by the Edgar Winter Group featuring bassist Dan Hartman on lead vocals (yes, that Dan Hartman) and Rick Derringer on guitar with "Free Ride". I prefer the hard to find single version with an emphasis on that addictive guitar lick or Hartman's own disco-fied remake from 1978. (Tavares also does a credible cover of the song.) Watch Dan and the rest of the Edgar Winter Group play the ever-loving crap out of "Free Ride" in their November 30. 1974 appearance on Don Kirshner's Rock Concert. 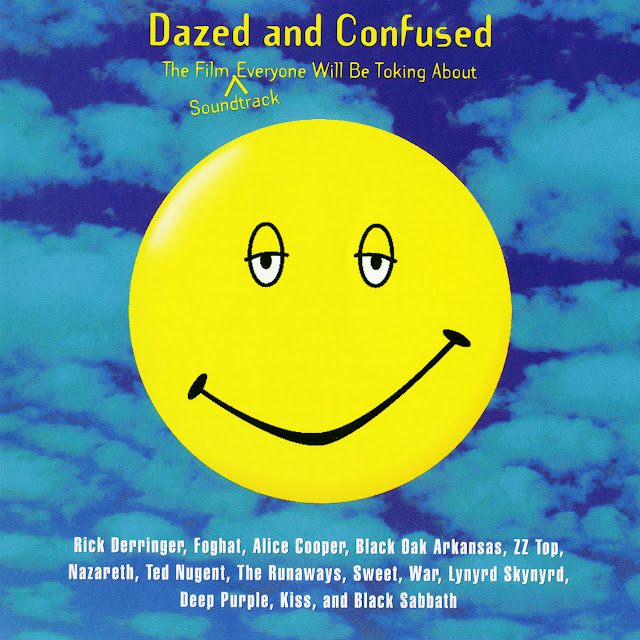 The Dazed and Confused factor: The following songs all appear on the soundtrack to the classic film Dazed and Confused, one of my all-time favorite movies and one of my all-time favorite soundtracks. Repeated viewings of the film on The Criterion Collection blu ray and listenings to my custom soundtrack compilation discs may have subconsciously biased my judgement towards these songs and I just want to be as forthright and as honest with you viewers as I possibly can. Always. 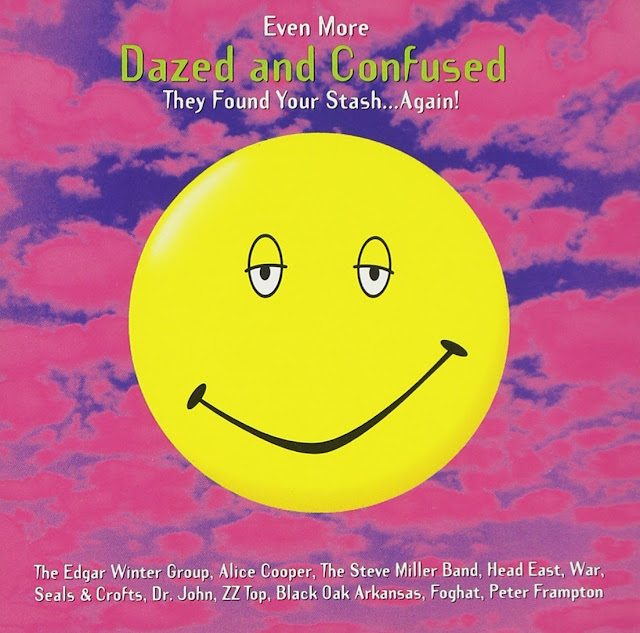