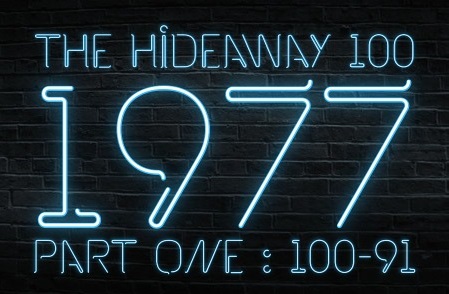 The first thing you should know is that this particular Hideaway 100 represents the third attempt at such a list for the singles of 1977. The first time I assembled it, the songs just fell in place easily and felt right as I listened to them over several days in a countdown format playlist from 100-1. Then I realized I left three songs - three songs I bought on 45s in 1977 and still own forty freakin' years later I mean you don't keep something that long unless it means something to you, right? - off due to a grave oversight, so I tried wedging and shoehorning those tracks in and bumping the other songs up, down and off the list to make it work. It did not work, so I scrapped that grotesque and disfigured second list which ended up with 122 songs on it, deleted the spreadsheet it rode in on and started over from scratch.

Four main references were consulted for this all-new Hideaway 100: Joel Whitburn's Top Pop Playlists 1970-1984, his Pop Annual 1955-2011, his Top Pop Records 1977 and this fantastic website that lists every single to make the Hot 100 in chronological order. We'll talk more about how the list came together in the next nine chapters but for now, let's get started with numbers 100-91.
100

Gonna start the countdown with a tribute of sorts to Dad. He bought the "Ariel" 45 the weekend after he first heard it on the radio, where it stood out from the pack of Top 40 tunes. Dad loved novelty songs and also contemporary songs that sounded like his beloved "oldies", the pre-Beatles era of rock music he grew up with and this song apparently struck his fancy on both counts. I never really cared much for hearing the song on the radio and since it's initial run in 1977, it appears mainly on One-Hit Wonder shows or All-Seventies Weekends on the local classic hits station though listening to it the past few weeks for this list, I came to appreciate it a little more. Well, enough to put it on the list so that's gotta count for something. Read somewhere that the label (Lifesong) was unable to keep up with the surprising and overwhelming demand for the single, causing it to stall at number 26 in June 1977 before falling twenty-one spots the very next week as sales trailed off due to lack of stock and then rebounding over the next five weeks back up to number 32 on Billboard's Hot 100 as supply flowed while demand ebbed. "Ariel" peaked at 17 in Cashbox, 23 in Record World and way up at number 4 on WLS, my station of choice in 1977.
99

Longtime Hideaway viewers know that the first 45 I ever purchased was "The Streak" by Ray Stevens in 1974. They might also know that one of my first album purchases was Captain & Tennille's Love Will Keep Us Together and while it would nearly two decades before I bought another Ray Stevens record, I picked up successive albums by Daryl & Toni as fast as my limited finances would allow which explains why my copies of their albums have RCA Music Service numbers stamped on them - the pressing of their third album Come In From The Rain on the Vinyl Wall is stamped R 123810. The album is home to "Can't Stop Dancin'" which I remember hearing quite a bit on WLS. Was surprised to learn much later while reading the album's label one day that R. Stevens wrote the track. Could it be the same R. Stevens I knew from "The Streak"? Yeah, buddy, one and the same. This upbeat, get moving song pairs nicely with Barry Manilow's equally hyper 1976 track "Jump Shout Boogie" and peaked at number 7 on WLS's weekly surveys, 13 in Billboard, 17 in Cashbox and 31 in Record World.
98

Yvonne Elliman paid her dues and worked her way up in the biz before scoring her first Number One Adult Contemporary hit with this cover of Barbara Lewis's "Hello Stranger" in 1977. I had all but forgotten about the track, leaving it off the first two drafts of this list but it kind of showed back up on my radar, like an old friend, while I was auditioning songs from 1977 I didn't recognize by title. I'm glad it found me again after what seems like a mighty long time as it makes a great addition to the out on the patio under the stars playlist of mellow and laid-back tracks. Over on the Hot 100, it peaked at number 15 (shoo-bop shoo-bop), 15 in Cashbox (shoo-bop shoo-bop), 22 in Record World (shoo-bop shoo-bop) and 28 on WLS.
97

There was a week or so in 1977 when "Christine Sixteen" was my favorite above all of their other songs. (I was a naive 11-year-old.) Forty years later, the lyrics strike me as creepy and delivered with an icky earnestness but then the chorus comes on and I'm singing along loud and lewd with the guy who probably wrote it from experience. Whether handicapped by the controversial lyrics that caused some radio stations to flat-out refuse to play it despite the wads of cash and bags of drugs proffered by Casablanca's crack promotions department or by the fact that it just isn't as good a song as the band's four previous singles, "Christine Sixteen" blew its load at number 26 on WLS, 20 at Cashbox, and 25 at both Billboard and Record World.
96

Compared to most of the other kids at Maplewood Elementary in 1977, I was kind of tall. I recall my sixth-grade homeroom class having quite a range height-wise from the tallest person (a girl!) just a few inches shorter than our teacher to a couple of kids that could have easily been mistaken as first or second graders based on their slight stature. (My two crushes that year, Janet and Diana, were both probably shorter than most of the other girls now that I think about it.) "Short People", like most novelty songs, was wildly popular amongst our age group but there was some bullying and eventually, it was banned from school grounds - we could not listen to the song at school dances and if we were caught singing it, we'd be punished. The song topped the Cashbox singles chart, peaked at number 2 in Billboard and on WLS but fell short (had to, Dinkles is my jam) at number 3 in Record World.
95

If you would have asked teenage me what I thought about the music of James Taylor, I might have said something along the lines of "that's my Mom's music" but I've grown to appreciate a lot of his songs. As a pre-teen, I really liked his duet with then wife Carly Simon on "Mockingbird" and the easy-going sing-along of "Handy Man" even after Dad tried to make a case that both songs - covers - were not as good as the original versions he knew and liked. This is also one of the songs that despite it's quieter nature and my inexperienced ears sounded better on an FM Stereo station like WLRW than the AM morass of WLS. "Handy Man" worked its way up to number 3 on WLS, 2 in Cashbox and 4 in both Record World and Billboard.
94

Even as a young boy, I remember thinking that Natalie Cole's voice stood out above most others, making me want to hear what she had to say but all she sang about was love, the romantic kind, which is a difficult concept for a child to grasp and comprehend. Unknown changes were happening within and I'd fall hard for what Natalie was selling on her next Top 10 single "Our Love" in 1978 but the seeds were definitely planted with "I've Got Love On My Mind" a year earlier when it peaked at number 5 in Billboard and Record World, 14 on WLS and 3 in Cashbox.
93

Bob Seger's Night Moves is an undeniably awesome album and that's how I prefer to listen to the songs from it - in the same order as they appeared on the album rather than as five singles and the rest. But when Night Moves came up in rotation one night the track "Mainstreet" caught my full attention for whatever reason so I looked it up on Song Facts only to learn it wasn't written about a Main Street at all but rather Ann Street in Ann Arbor, Michigan. Seger and the Muscle Shoals Rhythm Section took "Mainstreet" all the way to Number One up in Canada while settling for number 38 on WLS, 32 in Record World, 24 in Billboard and 19 in Cashbox.
92

I really liked "Don't Give Up On Us" in 1977 when it peaked at number 2 behind Hall & Oates "Rich Girl" in April. Dad had both the 45 and a later pressing of David Soul's self-titled album (early pressings did not contain the song as it was recorded and added, well, later) which he bought for Mom who hummed along to the melody whenever it came on the radio which is what she has always done and still does today. She'll sing show tunes, church hymns, and songs by The Supremes but everything else gets hummed. I have one question about the lyrics: What can't we change in the line "We can't change ours"? Is it the future? Thought so but it still is written weird. Over in the UK, they went positively bonkers for David Soul and this song, making it Number One for four weeks before finishing as the number 2 song of 1977 and number 9 song of The Seventies over there selling more than a million copies in the process. Here in the States, "Don't Give Up On Us" was Number One across the board: Billboard, Cashbox, and Record World though it has yet to be certified as a million-seller.
91

I know "Heaven's Just a Sin Away" by heart thanks to hearing it hundreds of times on the famous (in my mind) Cow Talk jukebox in the Summer of 1978. Alison Krauss has long been a favorite of mine and listening to The Kendalls again after all these years reminds me that Jeannie Kendall, along with Dolly Parton, may have conditioned my ears to be pre-disposed towards Krauss's honey-sweet soprano tone. "Heaven's Just A Sin Away" almost missed out being on this list due to a technicality. One of my cardinal rules when compiling a list of favorite songs for The Hideaway is I have to have all of the songs on vinyl or CD and, off the top of my head, I was fairly certain that this song was not in The Hideaway Audio Archives. Then I punched the title into my handy CLZ Music app and discovered I do have it on a Time-Life disc from the Contemporary Country series titled The Late '70s. (Looks like a few more songs from the 1977 Hideaway 100 are also on that disc.) Although it topped the Country singles chart, "Heaven's Just a Sin Away" only rose to number 69 in Billboard, 52 in Record World, 47 in Cashbox and, somewhat surprisingly, 32 on WLS where I don't recall ever hearing it.