The above playlist was originally featured here.

Today's Friday Film Fest entry is Purple Rain from 1984. It is one of the worst movies HERC has ever seen and he has watched parts of it well over a hundred times. The weekend it opened way back in July 1984, HERC saw it 10 different times at two different theaters and a drive-in with fourteen different companions, from his girlfriend at the time to his parents!

When the movie was released on VHS (a primitive form of recorded video entertainment that was effectively made obsolete by digital video disc) a few years later, no fewer than six people bought it for HERC as a gift.  Someone even gave him a huge cardboard standee from a video store advertising the video's release.  HERC still has that standee and one of those tapes and has since owned the movie on both single disc and double disc DVD as well as HD-DVD.  No doubt the blu-ray version is on his horizon - he knows its out there somewhere.

All of this for a movie HERC admits is one of the worst he has ever seen?  Yup.  As a movie, Purple Rain is pretty bad.  The cast is largely made up of amateur actors - it was the first film for all but three of them - and it shows.  Like Thank God It's Friday six years earlier, this film also won an Academy Award for Best Original Song Score.  And that's the allure of the film for HERC: the music.

Released a month before the movie opened in theaters, the Purple Rain soundtrack album was eagerly snatched up by HERC on a warm Summer morning at music store in a local mall accompanied by Janice S., the first girl to ever tell him that she'd rather "just be friends".  But the question begging to be asked is this - "HERC, why buy a soundtrack to a movie you haven't seen yet?"

It all started on a crisp Sunday evening in November 1982 while HERC was listening to The New Music Test Department (or was it Virgin Vinyl?) on the local rock radio station.  The disc jockey seized the opportunity to play songs outside of the station's playlist such as the latest new wave imports from England, MTV favorites and other new music not normally heard on the station.  On this fateful night, he played a song called "Little Red Corvette" by Prince.  Monday afternoon HERC was at the local airbase exchange buying 1999, which contains that song and 10 others spread across two albums.  It was HERC's first double album and his first Prince album. 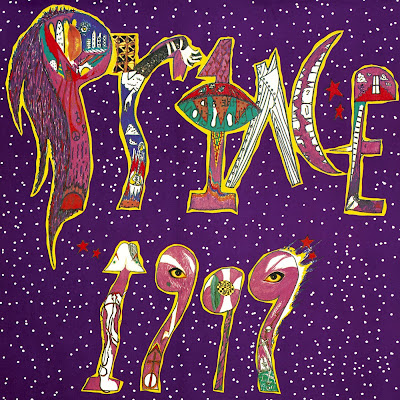 Within a month HERC had acquired Prince's previous four albums, the 12" single for "Let's Work" (which contained the first of many non-LP B-sides) and the 7" vinyl single of "1999" which contained another exclusive B-side, "How Come U Don't Call Me Anymore?"  Those were quickly joined by the first two The Time albums as well as what turned out to be Vanity 6's only album.  The single "Little Red Corvette" was released in February 1983 and in September, "Delirious" dropped with it's B-side, "Horny Toad".  Then a Thanksgiving single release of "Let's Pretend We're Married" and it's B-side which is unprintable here on HERC's Hideaway.

So when he read that Prince was releasing a new album and it would be the soundtrack to his first movie, HERC knew what he had to do.  He would be there on the first day it went on sale.  The soundtrack album was preceded two weeks earlier by it's lead single, "When Doves Cry" with it's fully funky B-side "17 Days".  Ironically, "When Doves Cry" was the last song recorded for and added to the film.  The song is notable for not having a bass line - Prince had recorded one but stripped it from the recording to make it sound more unconventional and for being credited to Prince rather than Prince & the Revolution like the forthcoming album. The single, with it's keyboard trimmed from the album version, quickly shot up the charts as excitement built for the movie and the steamy, visual effects laden video aired on MTV in heavy rotation.  SPOILER ALERT: "When Doves Cry" ended up being the Number One single of the year.

HERC played the grooves out of the Purple Rain album in anticipation of the movie.  When he wasn't at home listening to it he was in the HERCmobile blasting it on a TDK MA-XG 90 cassette he had recorded himself.  The blank tape, with it's clear plastic shell and metal framework, cost almost as much as the vinyl album had!  To this day, Purple Rain is the most listened to album HERC has ever owned.  Pink Floyd's Dark Side Of The Moon is a distant second, if you must know.
Striking while the music was hot and shortly after "When Doves Cry" began its slow chart descent, Prince released a second single from Purple Rain a mere week before the movie opened - the lead-in track "Let's Go Crazy" with it's wonderfully naughty non-LP side "Erotic City" featuring Sheila E.  The single version of "Let's Go Crazy" was edited down from the LP with the opening sermon truncated and the music fading in.  Prince had managed to picque a lot of people's curiosity with these first two singles as they both shot to Number One.  Could the movie be any good?

Armed with intimate knowledge of every sonic nook and cranny contained on the soundtrack album as well its first two singles, HERC bought two tickets and took Janice S. to see the very first showing of Purple Rain at the same mall where he had purchased the soundtrack.  To put it mildly, HERC was blown away and managed to see the movie three more times that very same Friday!  It wasn't so much the movie as a movie with plot and dialogue, it was the concert performances filmed for the movie that blew HERC away.

Highlights of the movie: The film and the album both open with "Let's Go Crazy", only in the film there is an extended breakdown in the middle of the song making the song twice as long in the movie as it is on the album.  (The artwork above features the 12" single version released a month AFTER the movie and containing the Special Dance Mixes of both "Let's Go Crazy" and "Erotic City".)  Then The Time performed their jam "Jungle Love" immediately afterward and it isn't on the soundtrack album which just features Prince and his band which he openly calls the Revolution after hiding the name by reversing it on the cover art for 1999.  Topless lady in a freezing lake.  Dez Dickerson, who sang and played guitar on 1999, performed with his band the Modernaires a song called "Modernaire" also not on the album.  Then the once topless lady performs scantily clad with two other similarly dressed women a suggestive number called "Sex Shooter".  Not on the album.  A couple of songs play in the background during scenes and there are scenes of Prince rehearsing the band and leading them through a few more songs including "Computer Blue" and "Darling Nikki" which are on the album just as they appeared in the film.  The Time take the stage with "The Bird".  And then...

Nothing prepared HERC for the film's three song finale.  The album lists the titular song last but in the movie it's played before the two others that come before it on the album.  (Yeah, you better read that again.)  Prince and the Revolution hit the stage, play "Purple Rain" and Prince leaves the stage while the band continues to play the song out.  Outside, he hears the applause so he runs back inside jumps on stage and they proceed to rock out with "I Would Die 4 U" and "Baby, I'm A Star" with that last song becoming a self-fulfilling prophecy.  The three songs as performed and filmed may very well be the best three song sequence anyone has ever performed with perfect amounts of talent, creativity, emotion and enthusiasm.  Truly a communal, almost live experience.

While Dez's Modernaires never saw a proper release, The Time issued Ice Cream Castle, which contained both of the songs they performed in the film, a few weeks prior to the film's premiere and a self-titled Apollonia 6 album featuring "Sex Shooter" was released later, in October 1984.  Three other singles were released from Purple Rain including the title track in a much shorter 4 minute version with an unreleased B-side instrumental "God" that appeared in the film; the frantic "I Would Die 4 U" with B-side "Another Lonely Christmas" and the duet with Apollonia "Take Me With U".

The Purple Rain album has been universally acclaimed since its release and has been named one of the greatest albums of all time by publications like TIME, Rolling Stone, Spin and Entertainment Weekly.  It is also one of only 40 albums to sell more than 13 million copies in the United States - HERC himself has purchased three of those on vinyl and two on CD.  Martin Maenza, one of Prince's biggest fans in North Carolina, has reviewed several Prince albums on his blog, Martin's View.  Read his Purple Rain review.

Do not watch the movie Purple Rain in its entirety but do watch the music performances within the movie by skipping to the appropriate DVD chapters as HERC has noted for you in the cheat sheet below - it will take less than an hour.  And by all means, enjoy HERC's mix of the soundtrack even further down the page.

Prince went on to star in as well as direct three other movies including a high concept concert film and a sequel of sorts to Purple Rain - none of them captured the spirit and energy, the rawness of  Purple Rain.  Twenty years after Purple Rain, Prince was inducted into the Rock and Roll Hall Of Fame Class of 2004 with ZZ Top, Jackson Browne, George Harrison and Bob Seger, amongst others.  Prince and his band kicked off the ceremony with a blazing performance of "Let's Go Crazy" and then Prince returned to the stage later to play what some refer to as the "The Greatest Guitar Solo Ever":